Incredible pictures have emerged showing the devastation and chaos wrought by the 100-year super storm that is battering parts of New South Wales.

Cows have been rescued after becoming trapped in floodwaters, dead fish have been spotted washed up at children’s playgrounds and shops have been decimated after being inundated by a torrent of water.

Evacuation orders are in place for parts of Sydney’s west and northwest and the New South Wales Illawarra and mid-north coast as rivers flood amid wild weather and torrential rain continuing to lash much of the state’s east.

Hundreds of flood rescues have been conducted by the SES since the weather began last week, and each one brings the state closer to an ‘inevitable fatality’, Emergency Services Minister David Elliott warned.

There were 1,500 urgent calls for help overnight, 211 schools across the state shut their doors on Monday and bus and train services have been cancelled due to the fast evolving situation. 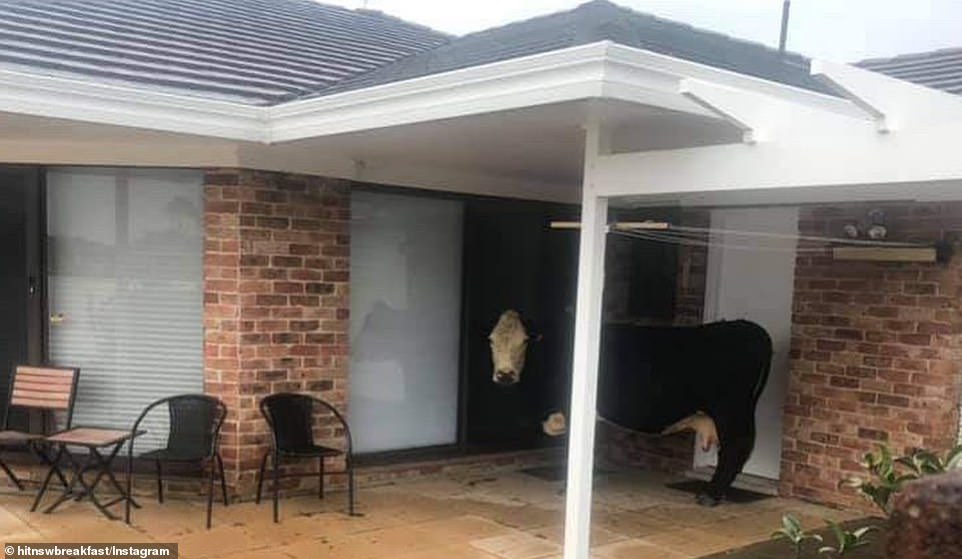 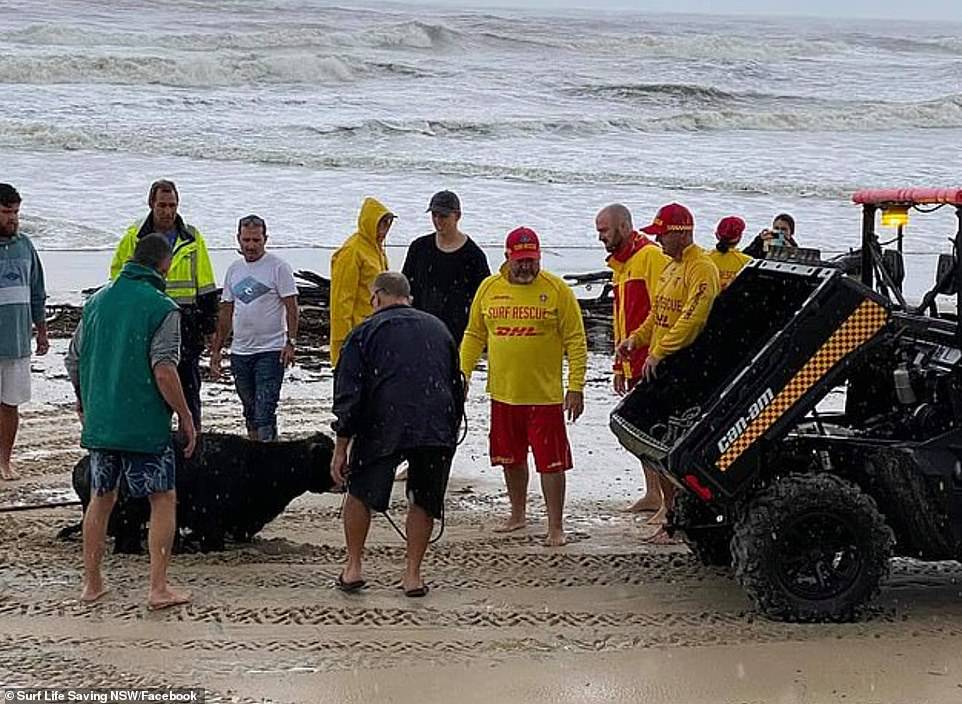 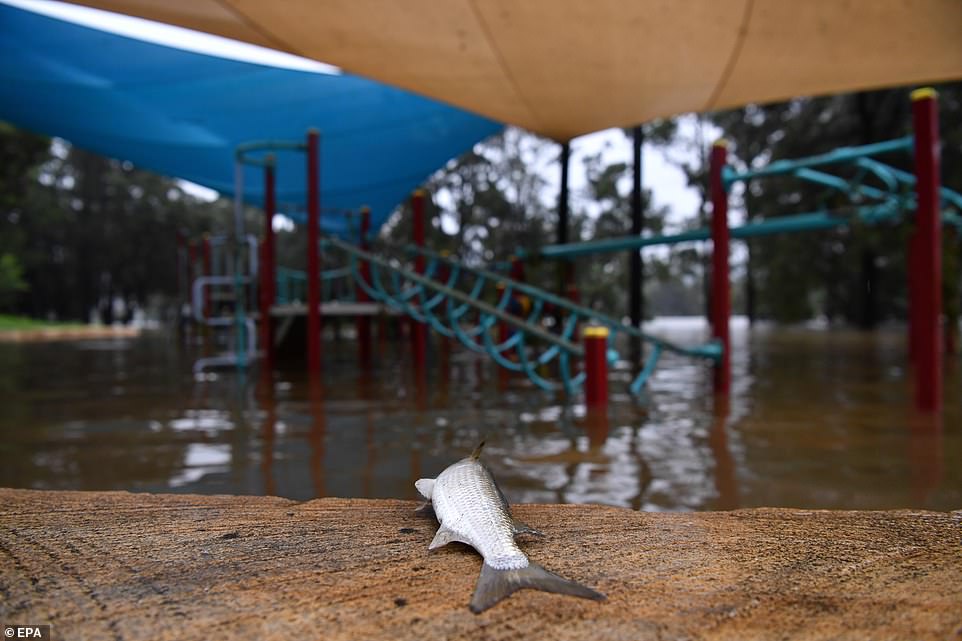 A dead fish is seen on the edge of a semi-submerged child’s playground on the banks of the flooded Nepean River at Tench Reserve at Penrith, Sydney’s west 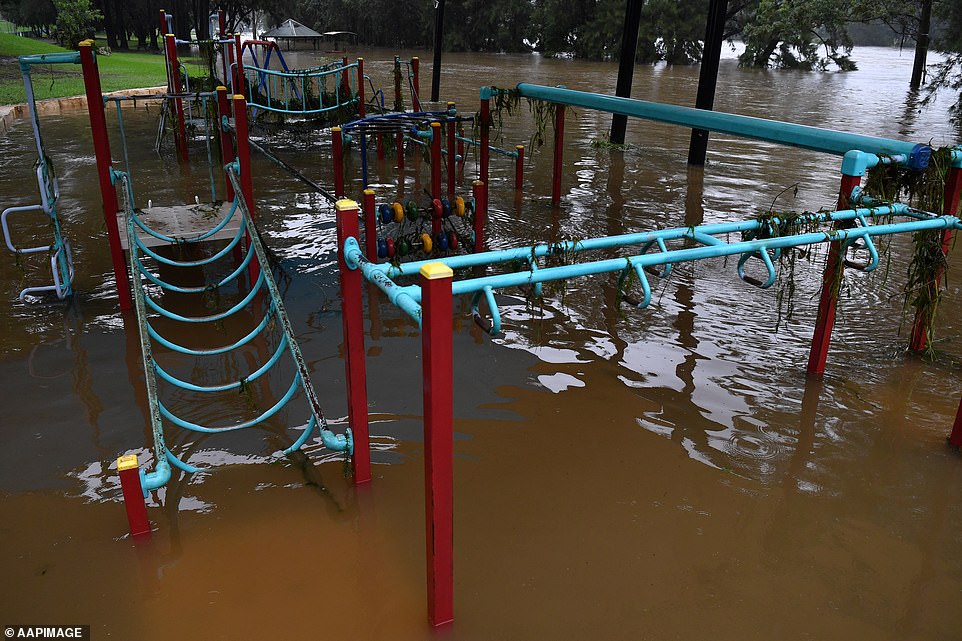 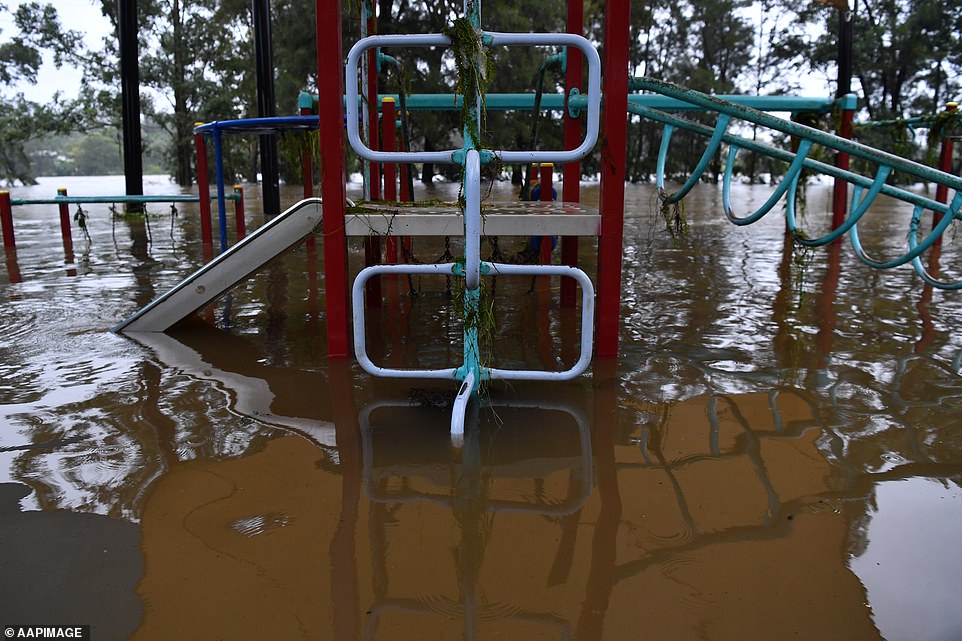 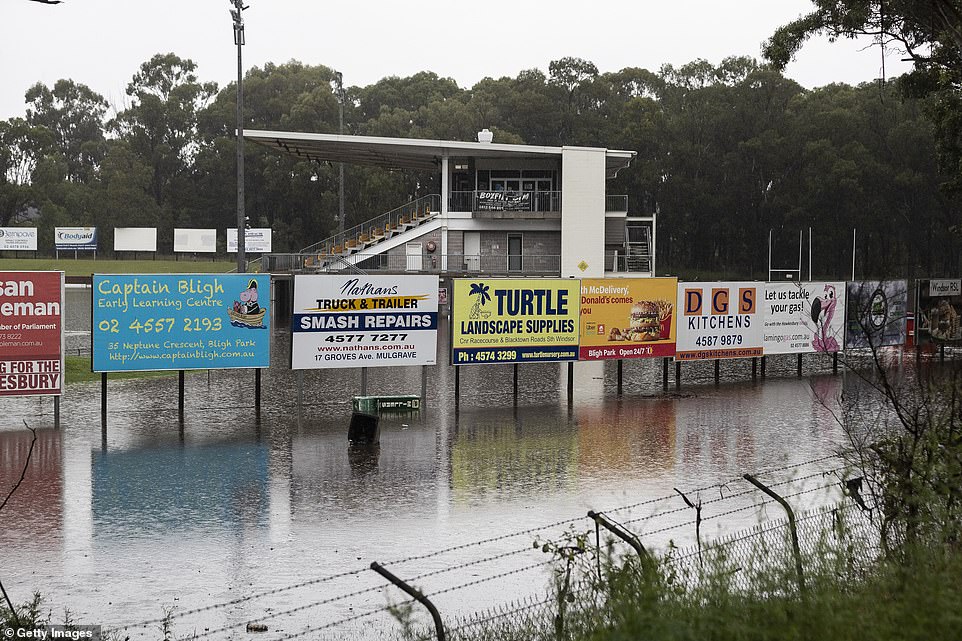 The Windsor Leagues Club, in Sydney’s northwest, was closed on Monday after the area was flooded 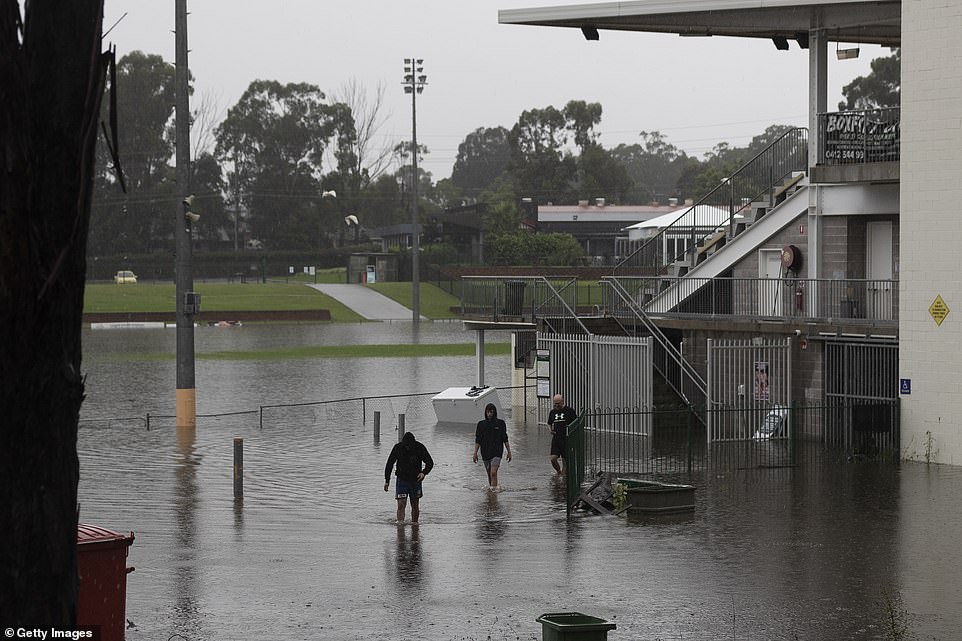 Communities along the Hawkesbury River, in Sydney’s northwest, have been told to brace for a once-in-a-generation flooding.

The Bureau of Meteorology expects Monday to bring the worst flooding event to the area northwest of Sydney since November 1961 – 60 years ago.

Floodwaters are expected to rise to major levels on Monday morning and inundate places such as Windsor, Pitt Town, North Richmond, Freemans Reach and Colo.

The Hawkesbury is predicted to reach peaks of up to 15 metres and the SES says homes and properties will be flooded, some up to roof height.

The floods will cut off evacuation routes and cause lasting outages to utilities, the SES said as it urged residents to prepare to evacuate.

‘Extensive outages of water, electricity, sewerage, telecommunications and gas are expected to last many weeks or months,’ the SES said early on Monday.

The event is likely to exceed the capacity of emergency crews, who have already responded to some 8000 calls for help, the SES said.

Flooding along the Hawkesbury and Nepean rivers comes after the Warragamba Dam spilled over, prompting some concern. 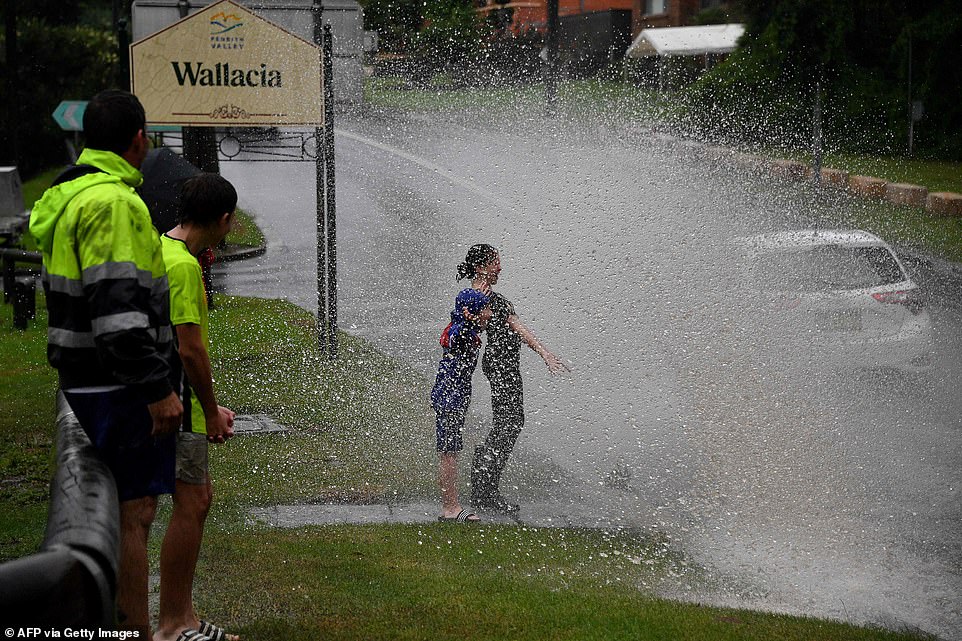 Children react as they are sprayed with water while motorists commute on a road in Wallacia, nearby Warragamba Dam, in Sydney’s west on Sunday

Children standing alongside a road in Wallacia, Sydney’s west, were sprayed with water as a car drove along a road that had been inundated with water 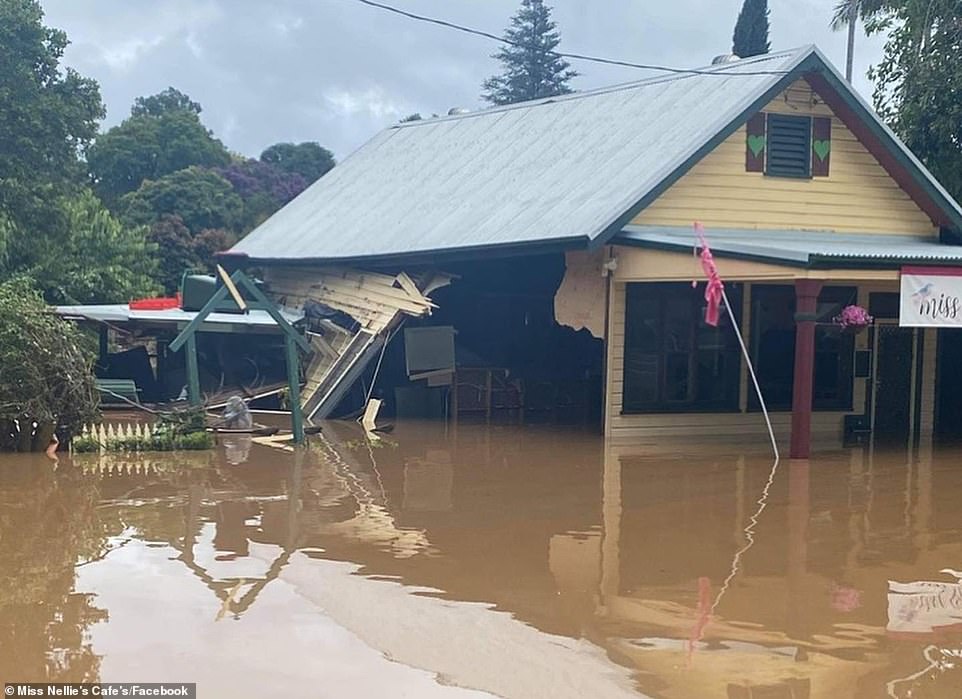 Nellie’s Cafe in Kendall, near Port Macquarie, was inundated with floods as the Camden Haven River burst its banks 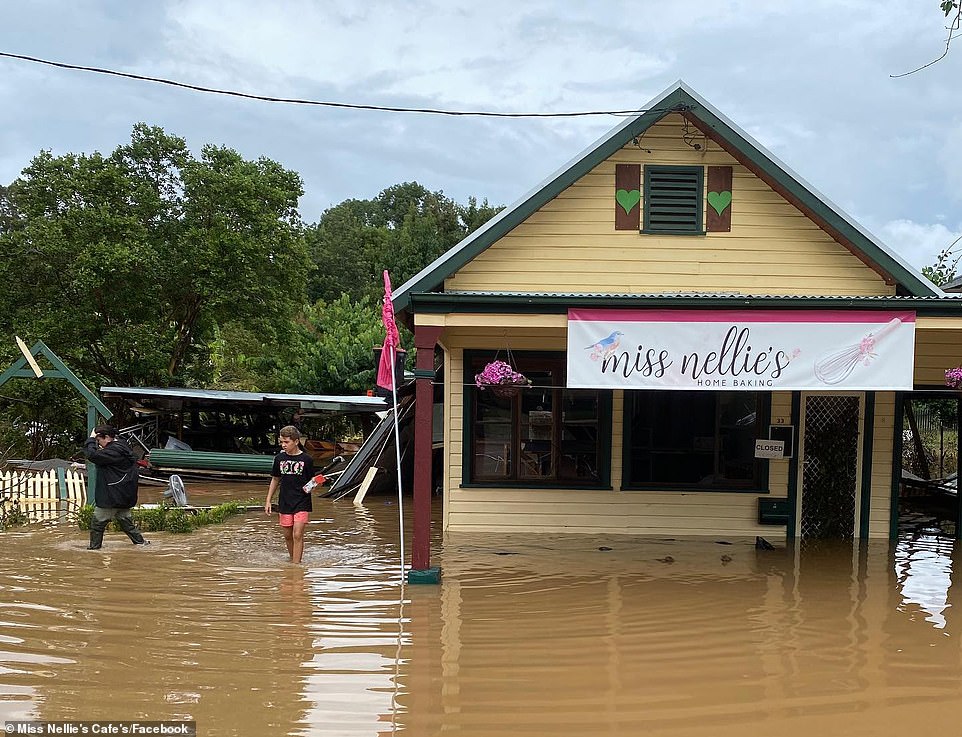 Cafe owner Janelle Nosworthy has been forced to beg locals to help fund the restoration costs, as her comprehensive insurance does not cover floods 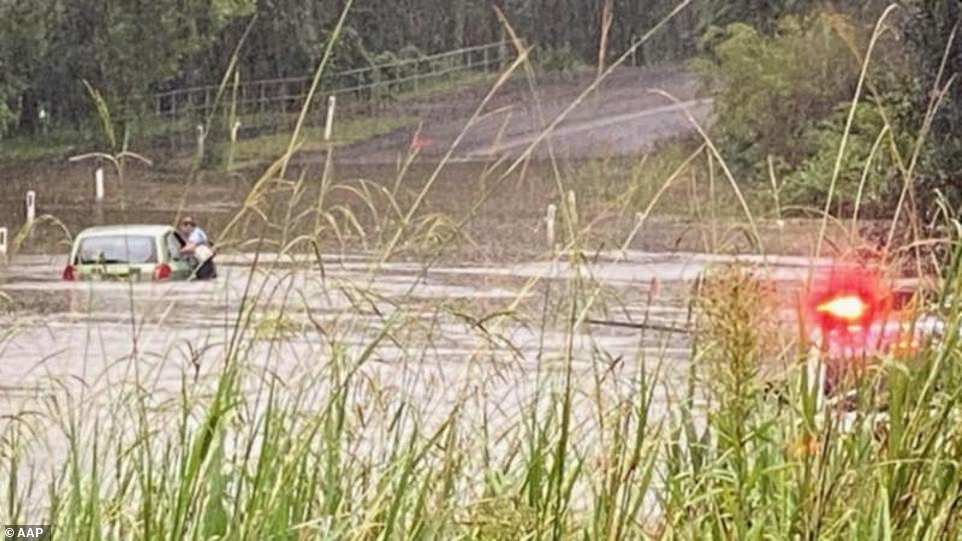 An 80-year-old driver was rescued by police after their car became half-submerged in water at Wyong, on the New South Wales Central Coast on Sunday 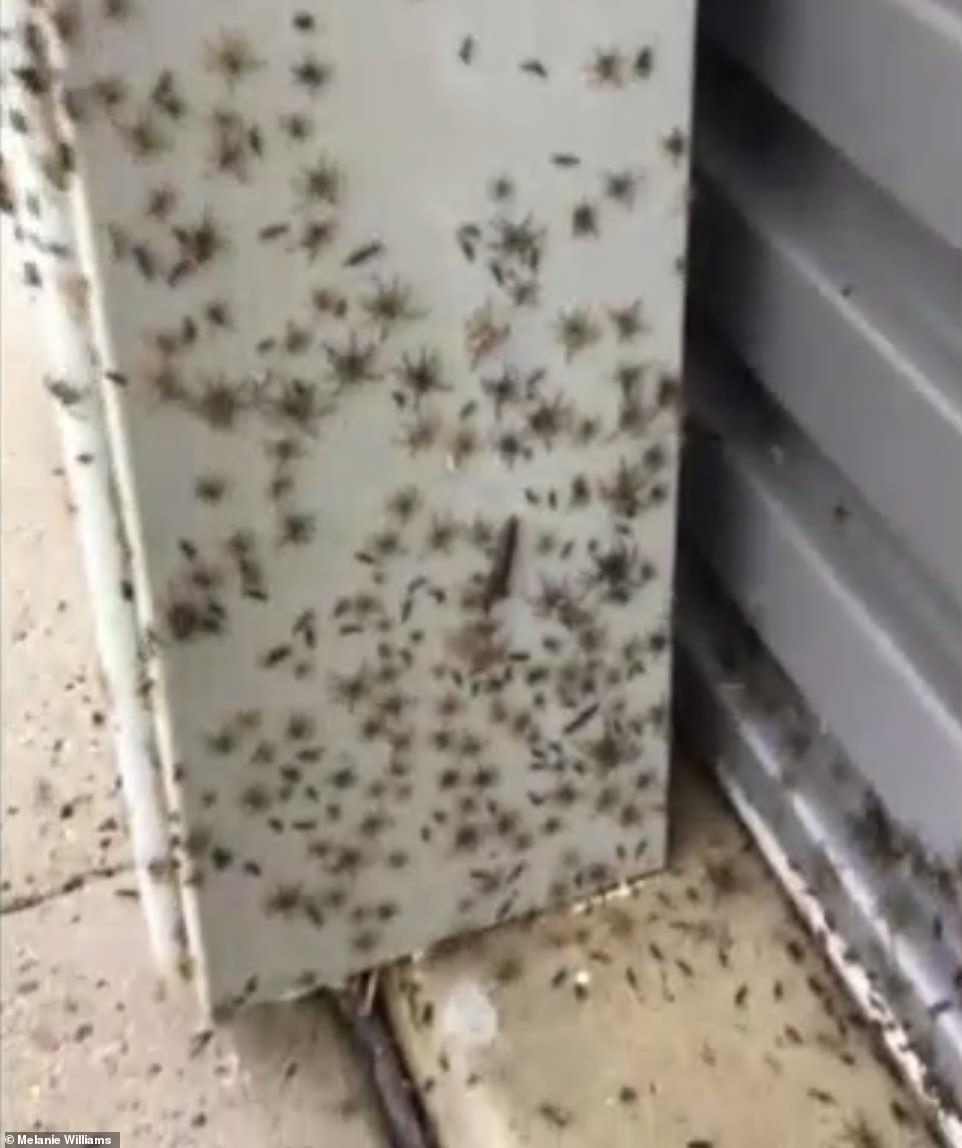 A photo posted to Facebook of spiders inundated a home in Macksville, on the NSW north coast, after the area was hit by raging floodwaters 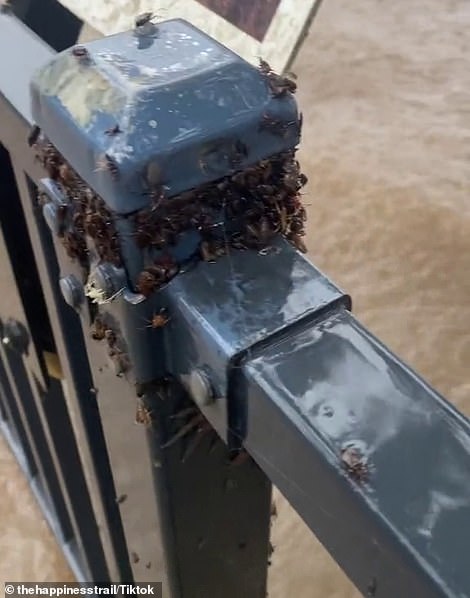 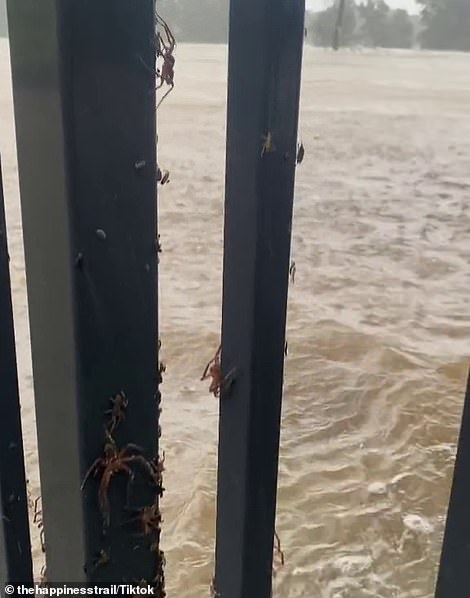 Flooding in NSW has forced spiders to also reach for higher ground, with stunning pictures showing them clinging to fences as a torrent of water rages below

Parts of Penrith and other areas along the Nepean were ordered to evacuate on Sunday.

Scores of people have already been rescued from floodwaters, while prison inmates have been evacuated and more than 100 schools remain shut.

Those saved include an 80-year-old woman who became trapped in her car at Wyong on the Central Coast on Sunday.

Police spotted the half-submerged car while attending to another incident nearby and realised the driver was still inside.

An officer waded out into the waters on foot and freed the woman before the car was pushed by the fast-moving waters into the nearby Wyong River. 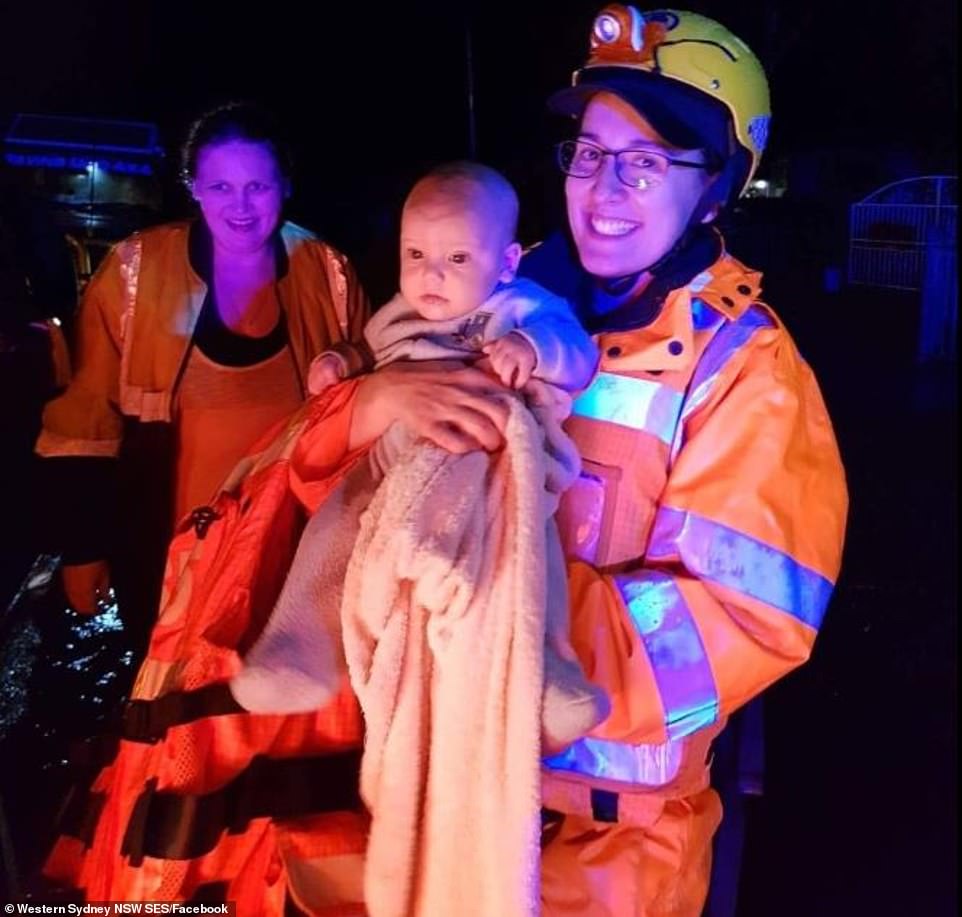 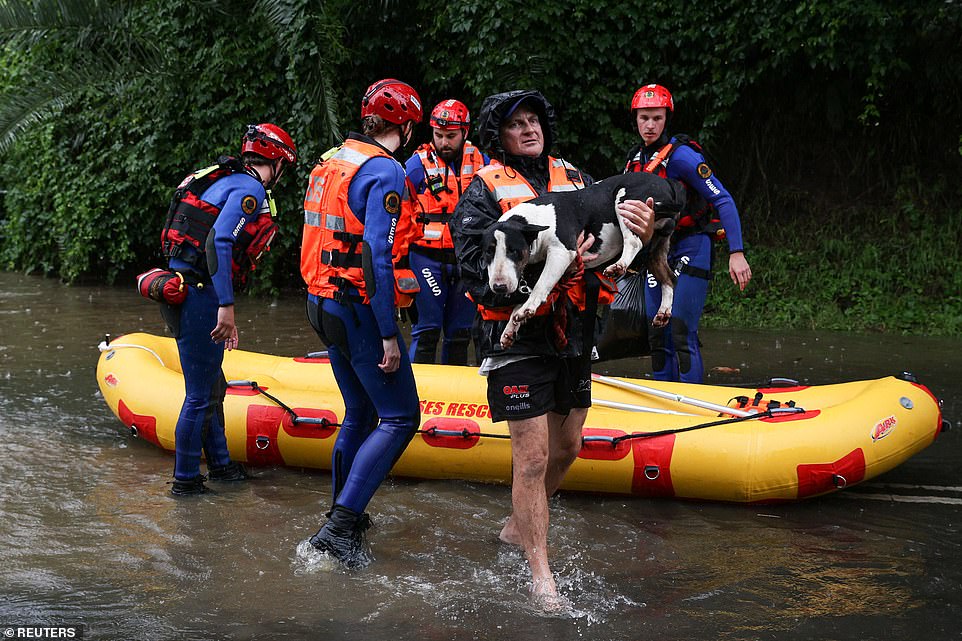 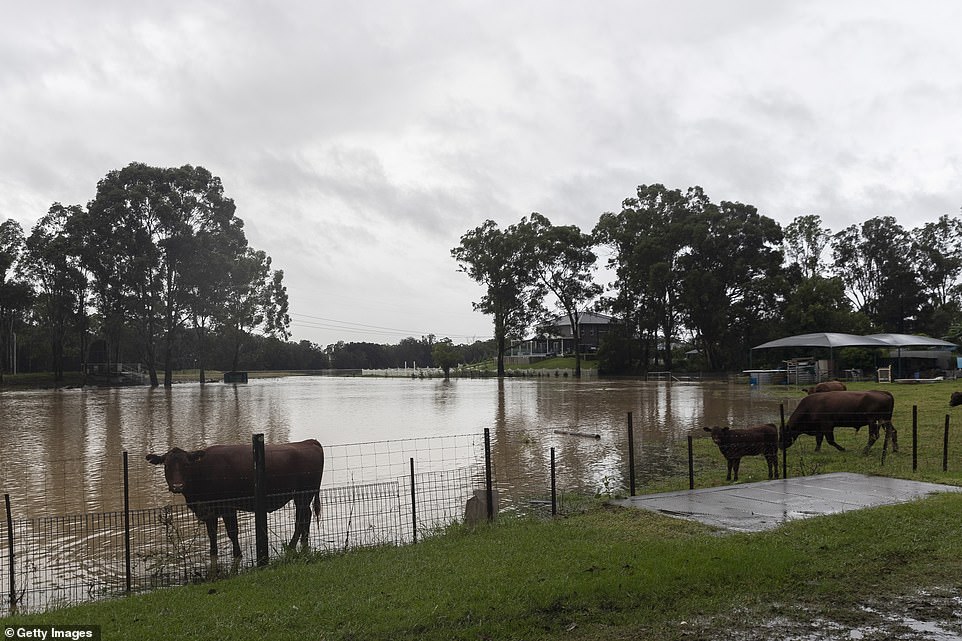 Heavy flooding in Schofields, Sydney’s northwest, over the weekend left cows standing in puddles of water 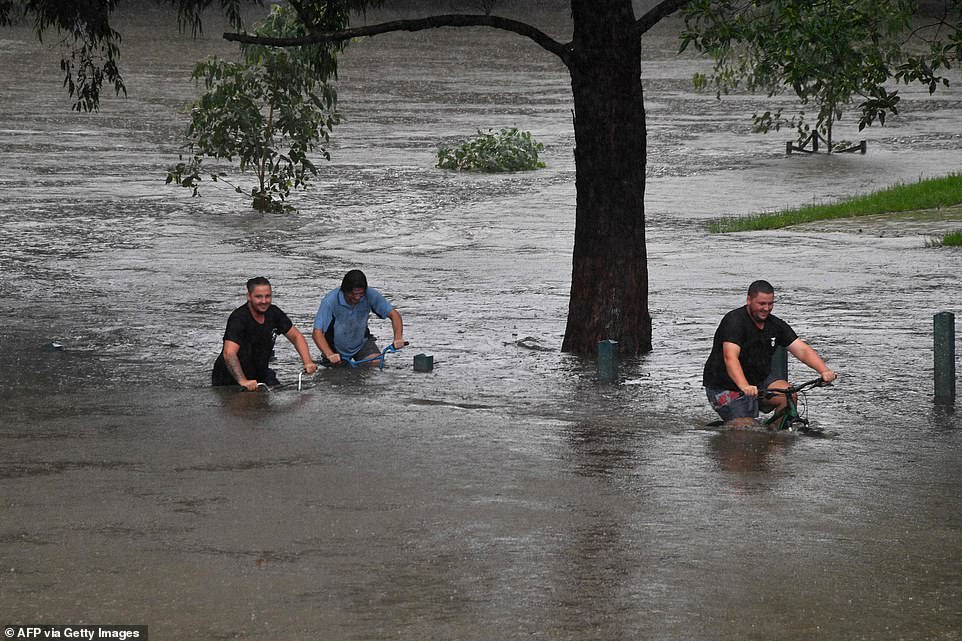 People ride their bikes through a flooded park on the banks of Nepean River in Penrith, Sydney’s west, on Sunday afternoon 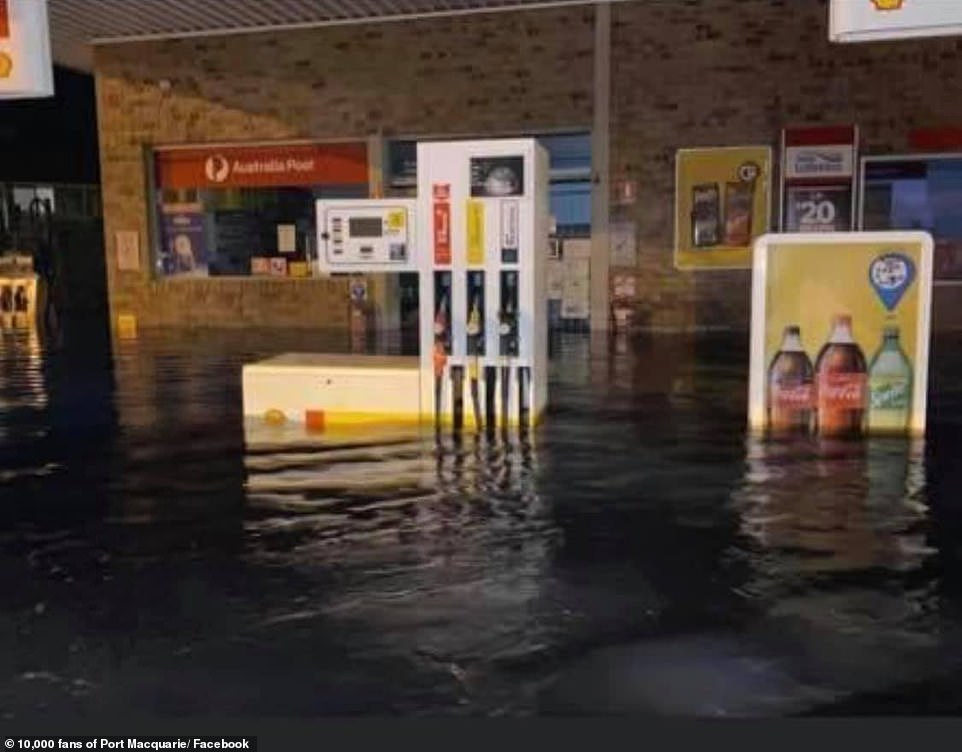 A petrol station at Port Macquarie, on the New South Wales north coast, was closed after the area was hit by severe flooding 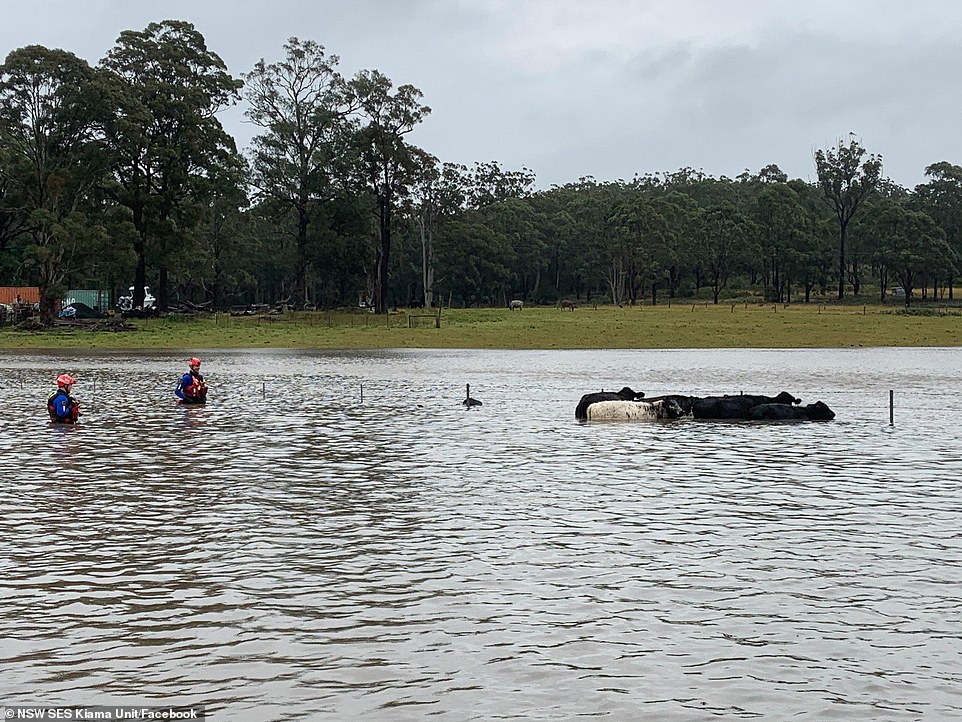 At Londonderry, in Sydney’s west, a five-month-old baby was rescued alongside a child, four adults and three dogs, in what as described as a ‘challenging’ operation to bring the family to safety.

A photo showing the infant wrapped in the arms of a SES volunteer was posted to Facebook, alongside the caption ‘It doesn’t get much better for a volunteer than saving a beautiful baby boy’.

‘With his mum’s permission, we are very proud to share a photo of this little tacker in the arms of a NSW SES Ryde Unit volunteer. The challenging but successful Londonderry rescue saved the five-month-old infant, a child, four adults and three dogs,’ the Western Sydney SES posted.

A beloved cafe where locals commiserated after the disappearance of William Tyrrell was completely destroyed by floodwaters.

Miss Nellie’s Cafe, in Kendall, a small rural town south of Port Macquarie, was flooded up to the roof after the Camden Haven River burst its banks in the early hours of Saturday morning.

There is very little left of the 100-year-old building with entire walls ripped off and the owners may not get any money back from their insurer. 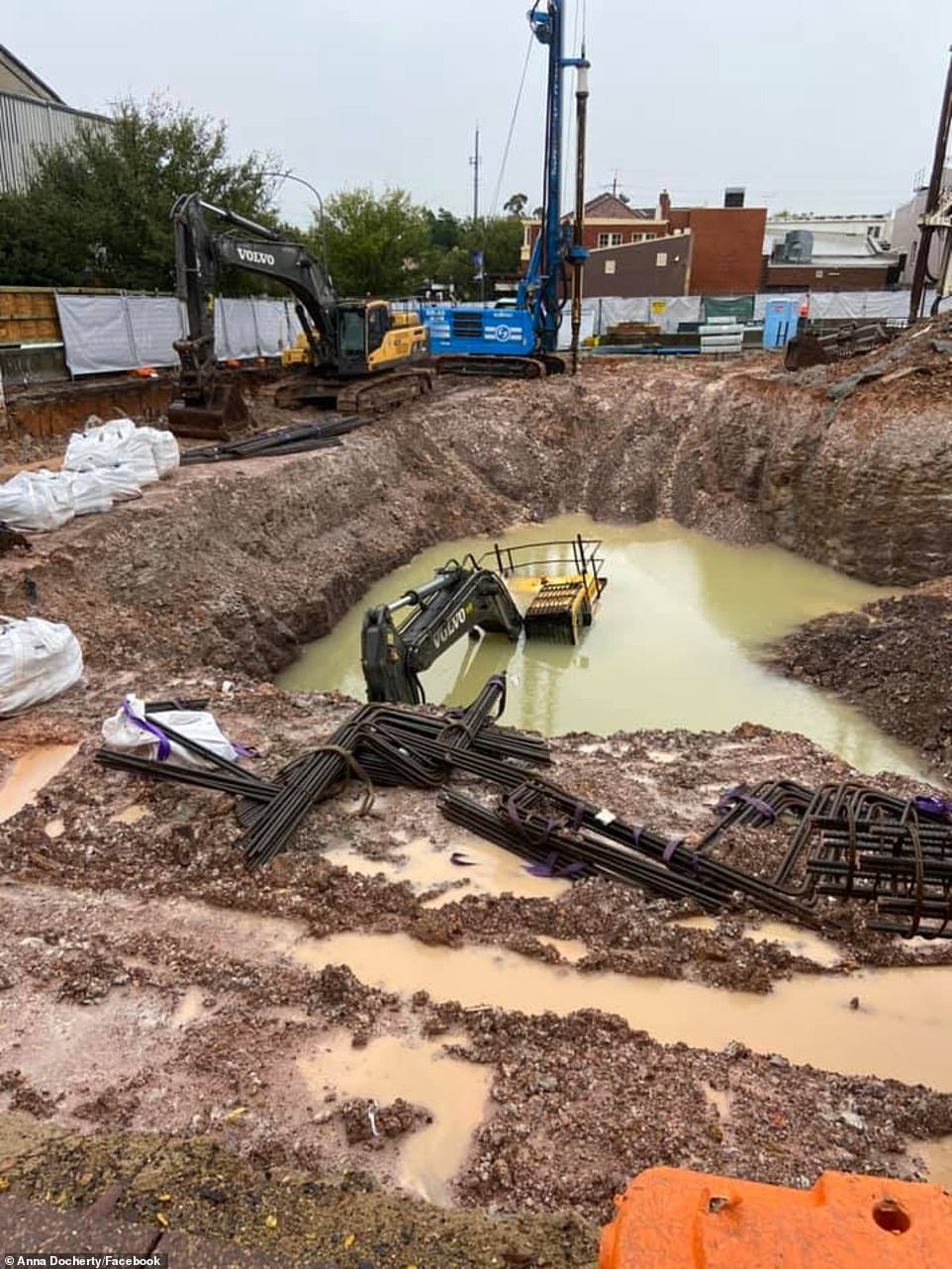 An excavator on a washed out job site was submerged in floodwaters on Sunday morning in the Sutherland Shire, south of Sydney 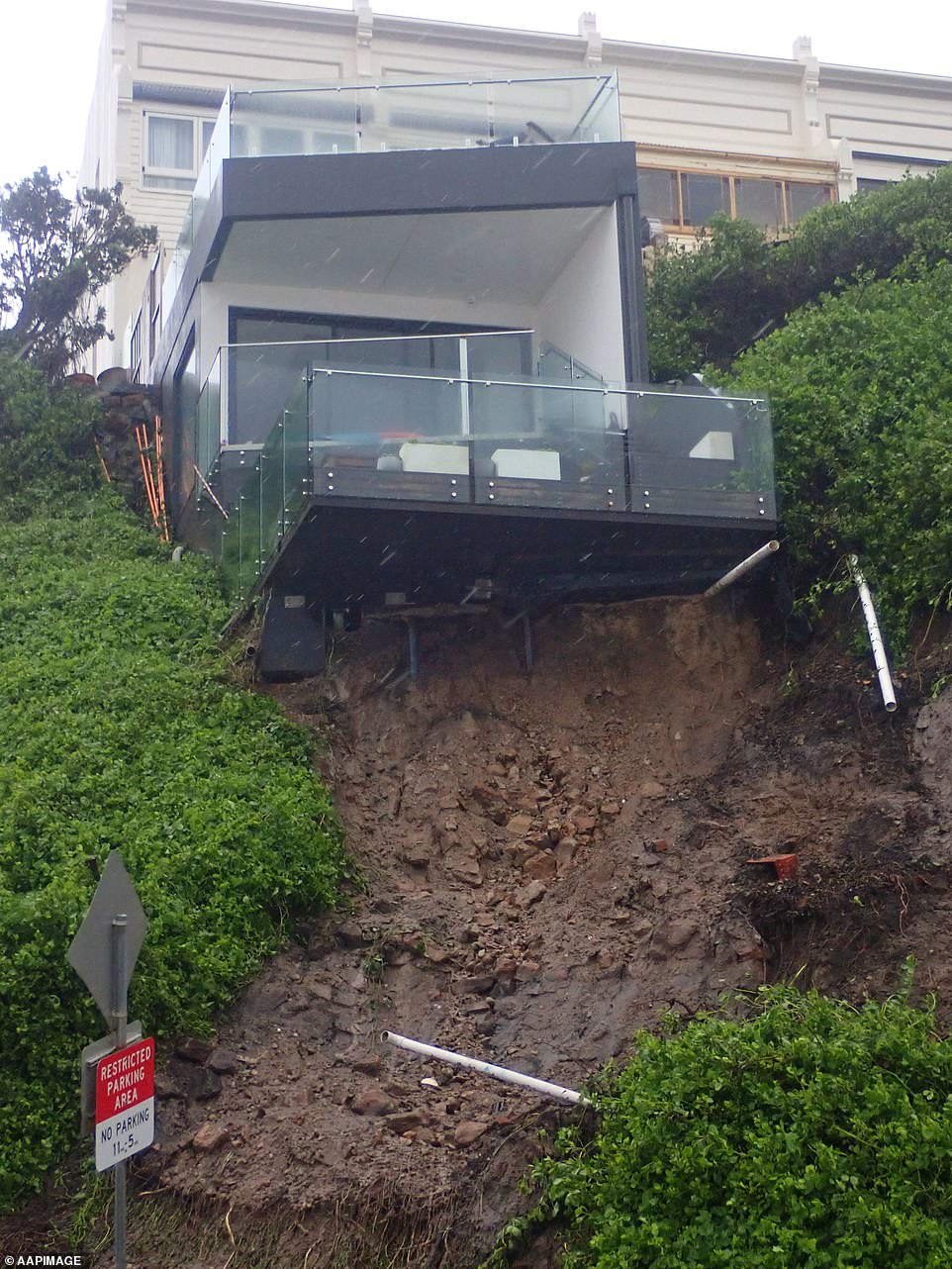 A luxury home in Newcastle, north of Sydney, is teetering on the edge of a cliff after a landslide caused the ground beneath it to collapse 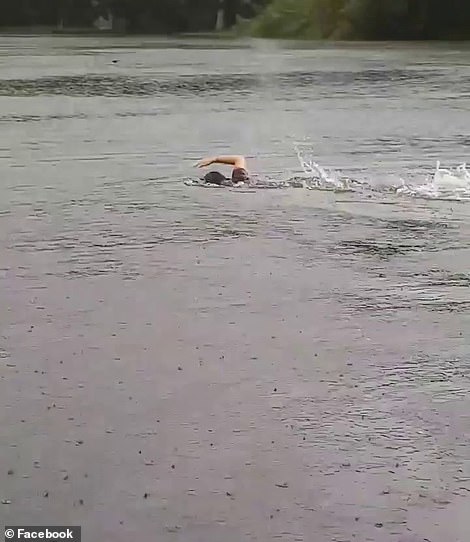 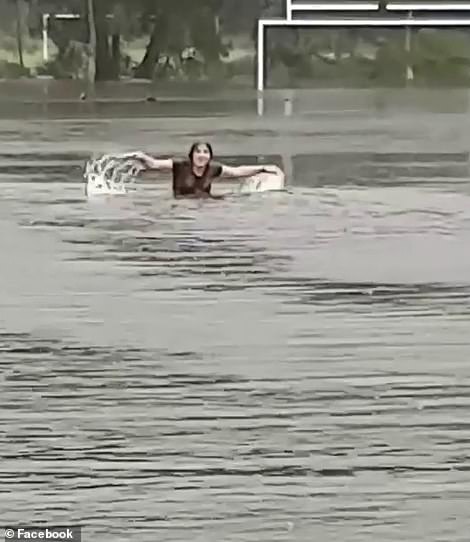 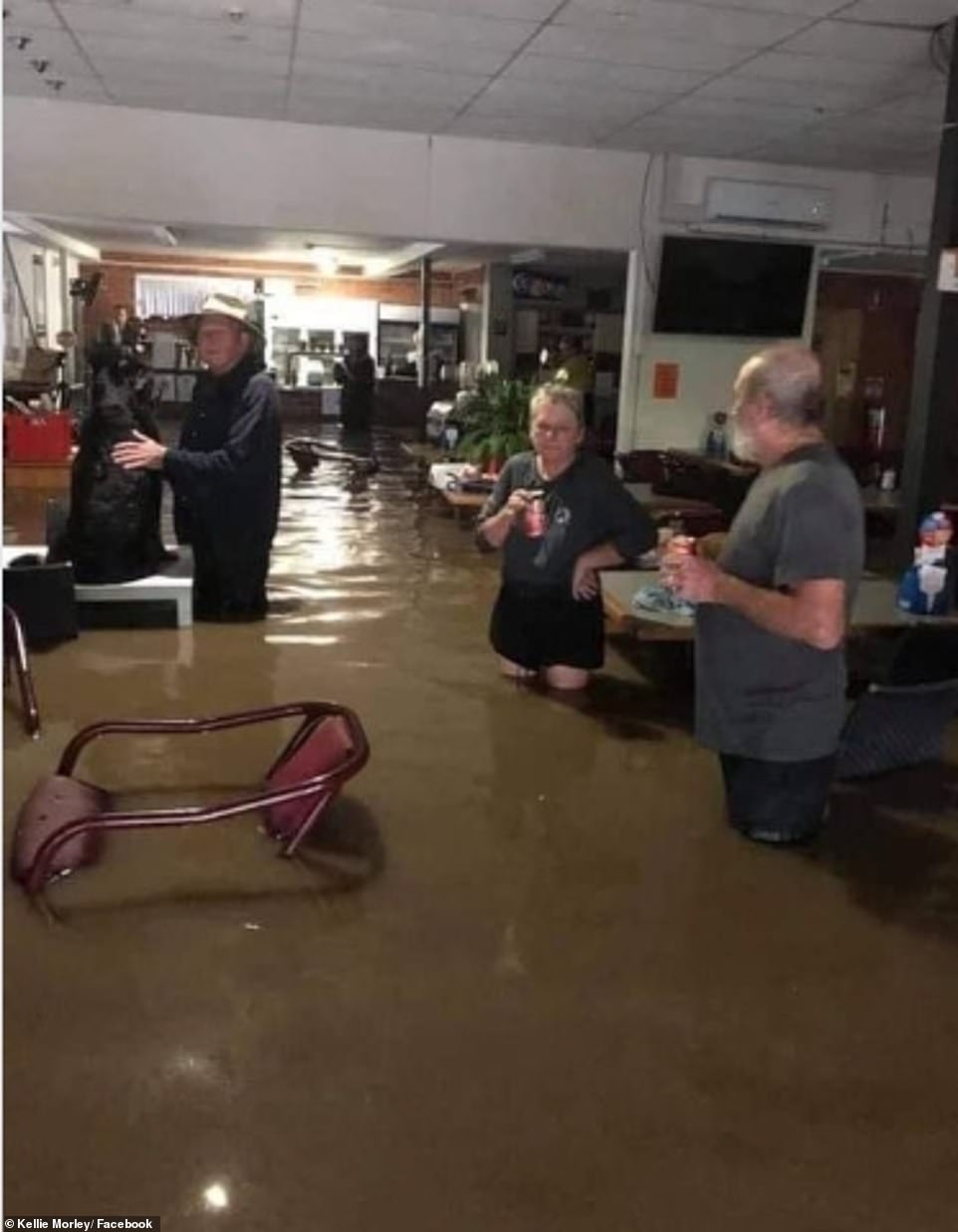 Patrons at a pub in Telegraph Point, in northern NSW, appeared unfazed while enjoying a beer while standing in thigh-high water on Saturday night 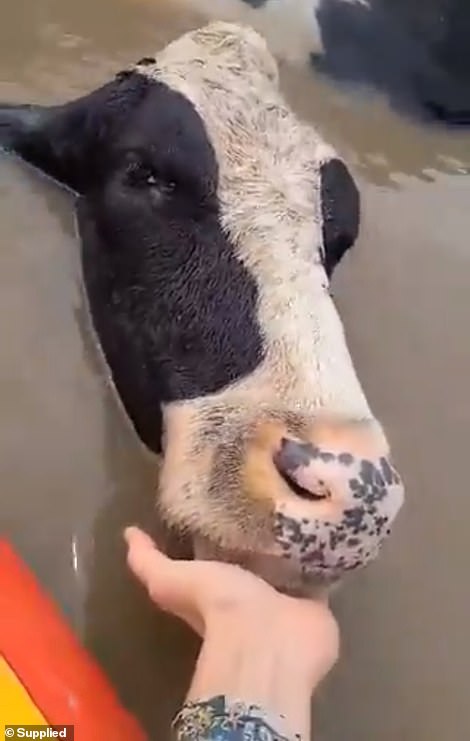 Much of the mid-north coast is now underwater as communities still recover from the black summer bushfires and the impacts of Covid-19.

Port Macquarie restaurateur Nathan Tomkins says the past few days have been a nightmare rollercoaster.

After record flooding at the Hastings River over the weekend, Mr Tomkins’ restaurant was inundated with neck-high water.

After surveying the damage on Sunday he says the venture he’s spent 24 years building is in ruins.

‘The water just went right through and just destroyed everything. There is nothing left,’ he told ABC TV on Monday.

‘This is just like a nightmare, it really is. I’ve got so many friends and family members that are just hurting at the moment from all this, who have lost their homes, lost their cars, lost their businesses.’

The nightmare isn’t over yet either, with much of the mid-north coast bracing for more flooding on Monday.

‘I’m feeling like I’m on a roller-coaster. I woke up this morning and I just pinch myself to go, ‘Okay, this is not real’. But it’s real,’ he said.

Hundreds of homes have been damaged, including one filmed floating down the Manning River in Taree.

Police have begged motorists not to drive on roads that are submerged by floodwaters. 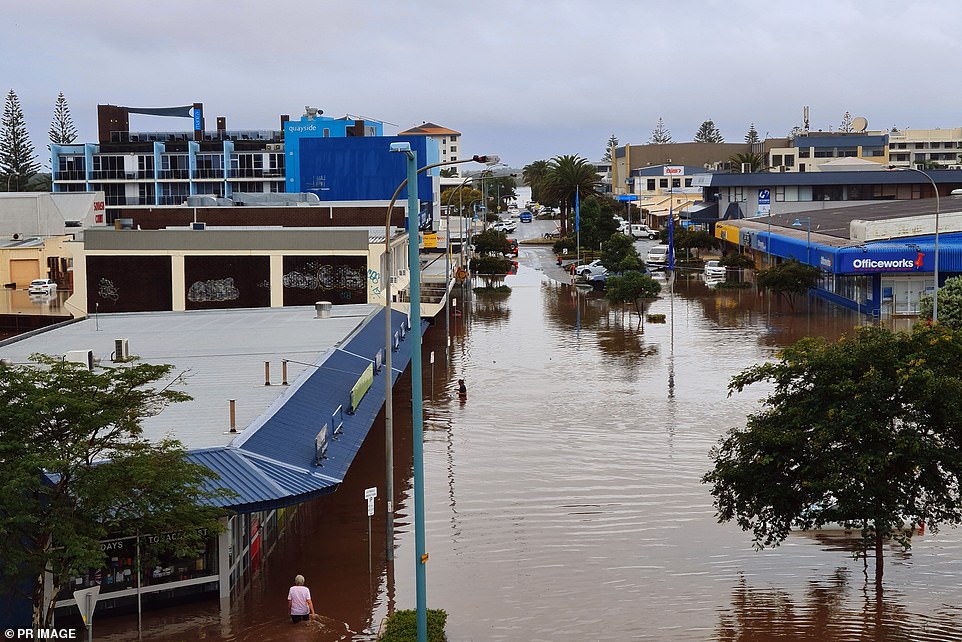 In Port Macquarie, a lone man could be seen wading through water as he made his way down Short Street on Saturday afternoon 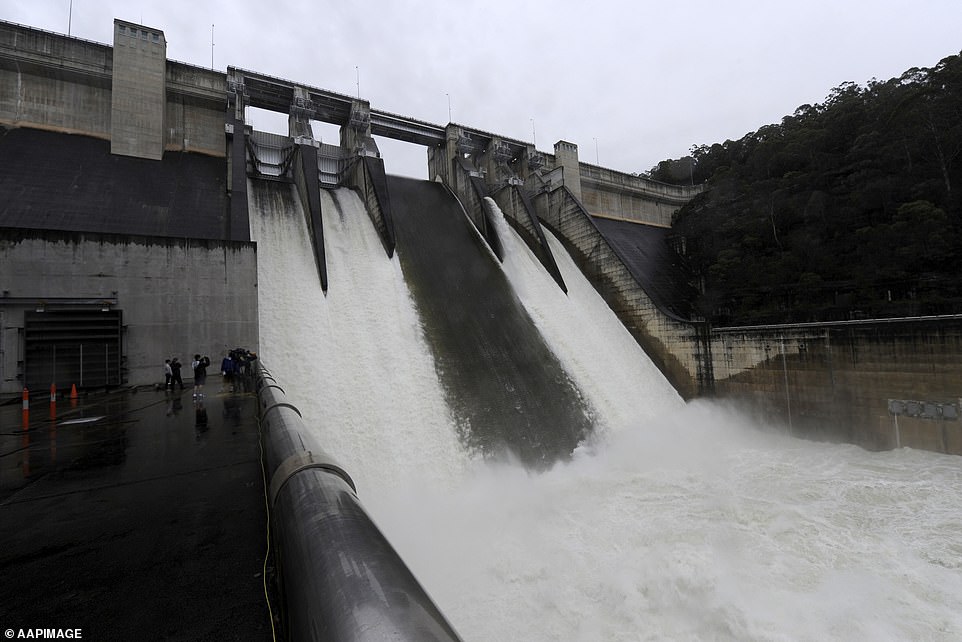 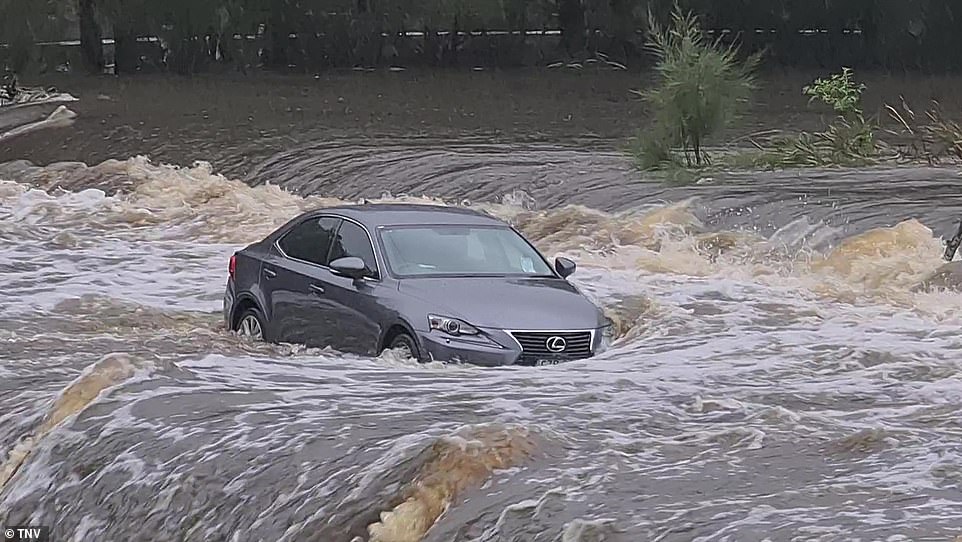 A car was pictured left stuck in raging floodwaters at the Audley Weir in the Royal National Park, south of Sydney 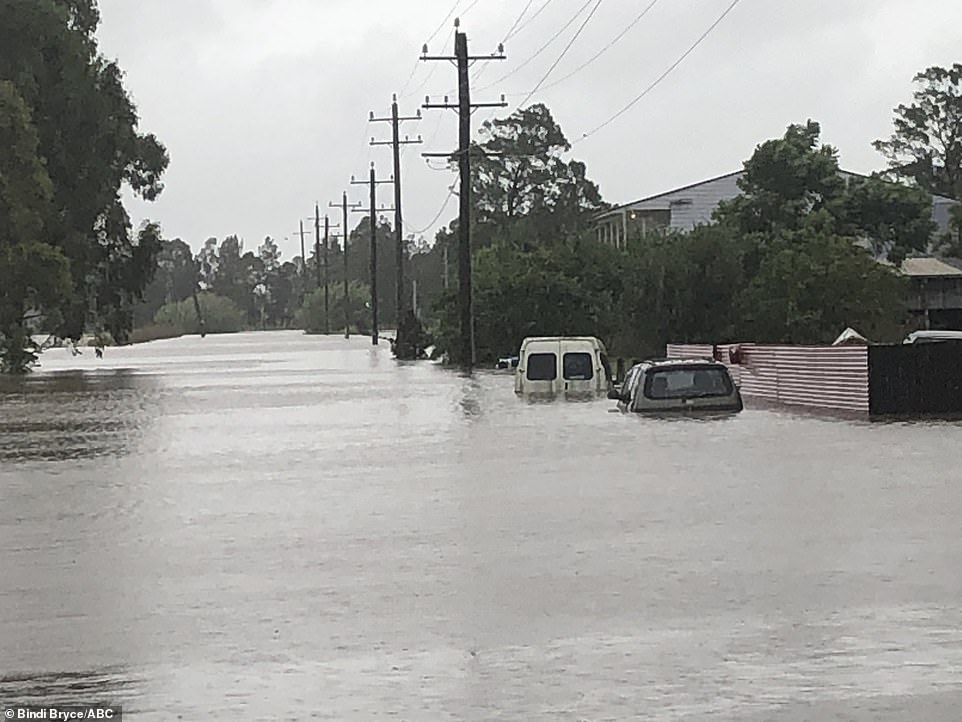 This entire street near the Paterson river in Hinton, in the NSW Hunter region, was underwater after heavy rain lashed the region

BOM’s Agata Imielska said the severity of rainfall in greater Sydney would ease on Monday but the mid-north coast would continue to be drenched and inland NSW would be pounded by rain.

She said the NSW northwest slopes and plains would receive four times more rain in two days than the entire March monthly average.

Ms Berejiklian has labelled flooding in parts of Port Macquarie, Taree and nearby towns a ‘one-in-100-year event’ for the region.

The federal government’s natural disaster arrangements have been activated for 18 local government areas across NSW.