IMF warns Covid will cause ‘lasting damage’ to living standards


The £21trillion cost of Covid: IMF warns the pandemic will cause ‘lasting damage’ to living standards worldwide

By James Salmon for the Daily Mail

The Covid crisis will blow a £21trillion hole in the world economy and inflict ‘lasting damage’ on living standards, the International Monetary Fund has warned.

After the total death toll from the pandemic climbed above a million victims, the Washington-based watchdog yesterday spelled out the devastating global impact of the virus on the economy.

In its latest World Economic Outlook, the IMF predicted the crisis would leave financial scars for years while the recovery would be ‘long, uneven and uncertain’. 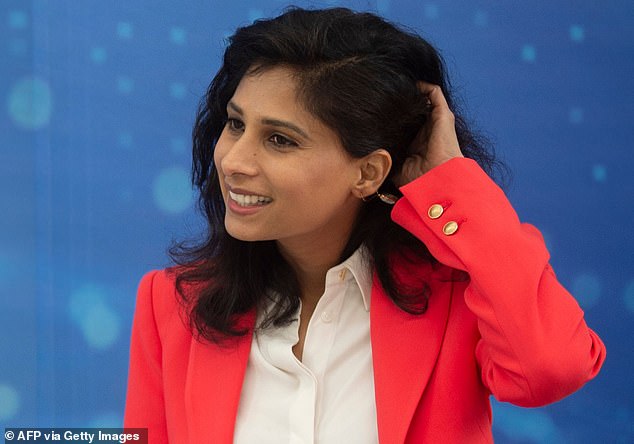 Setbacks: IMF chief economist Gita Gopinath said the crisis will leave scars and any recovery will be ‘long, uneven and uncertain’

It also forecast the total loss in output triggered by the pandemic will hit $28trillion (£21trillion) by the middle of the decade.

This is a dent worth more than the size of the US economy, the largest in the world.

Gita Gopinath, chief economist at the IMF, said this ‘represents a severe setback to the improvement in average living standards across all country groups’.

She added: ‘This crisis will likely leave scars well into the medium term as labour markets take time to heal, investment is held back by uncertainty and balance sheet problems and lost schooling impairs human capital.

‘All countries are now facing what I would call The Long Ascent – a difficult climb that will be long, uneven, and uncertain. And prone to setbacks.

‘The path ahead is clouded with extraordinary uncertainty. Faster progress on health measures, such as vaccines and therapies, could speed up the ascent. But it could also get worse, especially if there is a significant increase in severe outbreaks.’

Despite all this, the IMF has become marginally more optimistic since the summer, predicting the global economy will shrink 4.4 per cent this year. 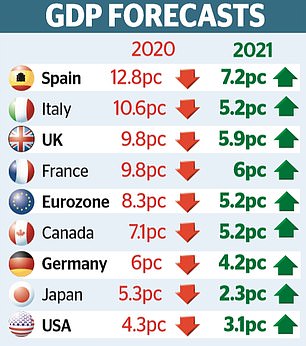 This marks an improvement on the 5.2 per cent contraction it predicted in its last World Economic Outlook in June.

The upgrade reflects both that the recession in the second quarter was not quite as severe as previously feared, and that economies around the world have bounced back more quickly than expected as lockdowns have been lifted.

But even a 4.4 per cent contraction would still amount to the worst worldwide slump since the Great Depression of the 1930s, the Fund said.

The IMF also warned the recovery would be slightly slower than it had previously thought, amid a spike in infections and a fresh wave of lockdowns and restrictions to slow the spread.

This sentiment was echoed by the Bank of England Governor Andrew Bailey who told peers on the House of Lords Economic Affairs committee yesterday: ‘The hard yards are still ahead of us.’

Experts have been taken by surprise by the strength of the UK’s economic recovery as the national lockdown which was imposed in March has lifted.

But the introduction of local lockdowns and other restrictions to tackle a second wave of the virus have fuelled fears that the recovery could be snuffed out.

The IMF slightly upgraded its projection for the UK, predicting the economy will shrink by 9.8 per cent this year, the same as France.

This compares to a 10.2 per cent fall anticipated in June. The UK is expected to lag behind the eurozone, which is predicted to contract by 8.3 per cent this year.

Of the G7 group of major developed economies, only Italy is expected to fare worse.

But the UK economy is also expected to bounce back by 5.9 per cent next year, more quickly than the eurozone.

The IMF emphasised that the global outlook would have been bleaker without ‘unprecedented fiscal, monetary, and regulatory responses’ to prop up household incomes and businesses.

Gopinath said that the steps taken have ‘helped save lives and livelihoods and helped prevent a financial catastrophe’.

But, as governments contemplate how to tackle the spiralling Covid debts, she warned: ‘It is essential that fiscal and monetary policy support are not prematurely withdrawn, as best as possible.’

Heart Health Made Easy: How To Lower Blood Pressure & Cholesterol

The Trump administration designates Cuba as a state sponsor of terrorism

England striker Harry Kane has once again told Tottenham he wants to leave the Premier League...