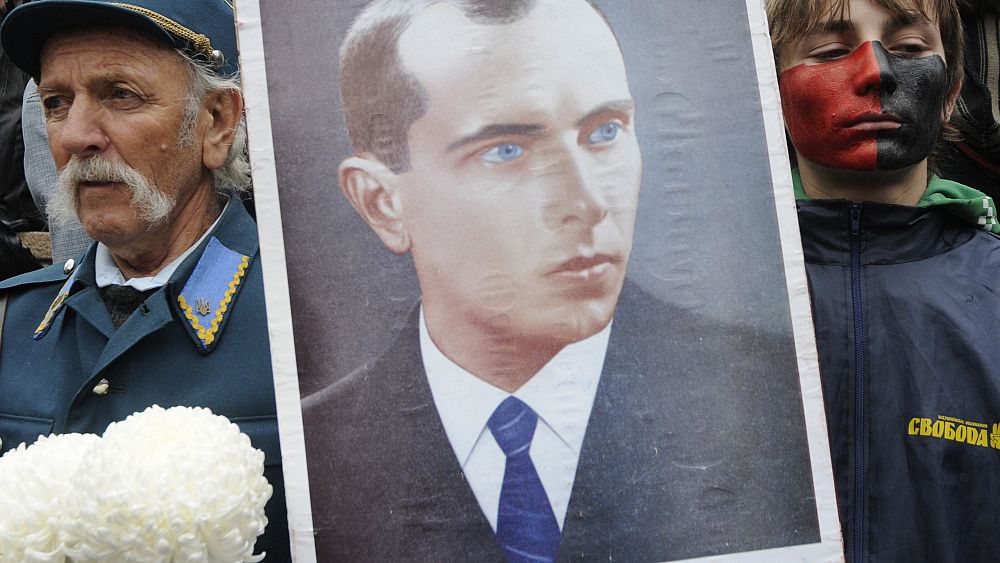 There are few figures in Ukrainian history as controversial as Stepan Bandera, and fewer still are able to influence so profoundly modern politics more than six decades after their death.

Bandera, who died in 1959 after being poisoned by Soviet agents, is seen as a national hero who fought for Ukrainian independence during the 1930s and 1940s. To others, he is a war criminal whose nationalist forces carried out atrocities against Jews and Poles during WW2.

Now the authorities in Lviv, in western Ukraine, have reignited the debate over the wartime militia leader by requesting the government to rename Arena Lviv in honour of Bandera and forcing Ukrainian President Volodimir Zelenskyy to pick a side during a bitter election battle.

“They are pressuring Zelenskyy and [Denys] Shmygal, the prime minister, to decide if they are nationalist or not,” said Alexei Jakubin, a senior politics lecturer at Kyiv Polytechnic Institute.

Zelenskyy, who won the 2019 election in Ukraine by a landslide with over 70% of the vote, is currently polling at just 19%.

“Zelenskyy and Poroshenko have a fight going on about who is the most patriotic [and] Zelenskyy is in a difficult position because his support is much lower he is moving [towards] the right wing, which is the territory of Poroshenko,” said Jakubin.

“This is a test to see whether or not he is a real patriot,” he added.

It is not the first time by any means that a war over Bandera’s legacy has been waged in the highest echelons of Ukrainian politics.

In 2010, Bandera was named a “Hero of Ukraine” by the outgoing President Viktor Yushchenko, sparking anger in Europe, Poland and Israel.

He was stripped of the title in 2011 under Yushchenko’s replacement, President Viktor Yanukovych, but when Yanukovych was ousted in 2014, Kyiv’s City Council renamed the city’s Moscow Avenue Stepan Bandera Avenue after the Russian invasion of eastern Ukraine.

There are monuments to Bandera throughout western Ukraine and in 2018, the authorities in Lviv, just 46 miles from the Polish border, announced that 2019 would be the ‘Year of Stepan Bandera’, again sparking protests from Israeli and the Polish government.

Who was Stepan Bandera?

Following World War One, Poland and Ukraine fought a short war which resulted in Poland capturing the city of Lviv. Bandera, who studied in Lviv, was a member of various nationalist Ukrainian organisations before joining the Organization of Ukrainian Nationalists (OUN), becoming second in command of the militia group in 1933.

The following year, Bandera orchestrated the assassination of Polish Minister of Interior Bronisław Pieracki and was sentenced to death by a Polish court, later commuted to life imprisonment. When the Nazis invaded Poland, Bandera and other nationalists escaped from prison.

Bandera was trained by the German Abwehr to do counter-espionage in the Soviet Union, occupied Poland and Ukraine, which he did until 1941. That year, Bandera and his followers signed a declaration of independence for Ukraine and announced an alliance with Germany.

To their disappointment, Nazi Germany refused to recognise Ukraine’s independence and ordered Bandera to withdraw the declaration. When he refused, he was arrested and later jailed in the Sachsenhausen concentration camp, which held high-profile political prisoners.

During Bandera’s time in Sachsenhausen, the OUN carried out thousands of murders of Poles, most of them civilians, during a campaign of ethnic cleansing in Volhynia and later Eastern Galicia. As many as 100,000 people may have died during the two-year campaign.

While Bandera was not directly involved in the ethnic cleansing – as he was in jail – he had openly stated that both Jews and Poles had no place in a sovereign Ukrainian state. During the Holocaust, one-sixth of the Jews murdered by the Nazis were from Ukraine.

During Bandera’s time in prison, the Nazis began executing other leaders of the OUN and in the final years of World War Two, the organisation found itself at war with both Germany and the Soviets, which considered the country part of the Soviet Union.

For his supporters, the fact that Bandera fought to prevent the Soviet occupation of Ukraine is more significant than his collaboration with the Nazis. Since the 2014 Euromaidan revolution, Bandera has been a rallying cry for many Ukrainian nationalists, particularly after the Russian annexation of Crimea and the backing of separatist movements in eastern Ukraine.

“The main thing for the people following Bandera today is that he fought for an independent Ukraine. They ignore that his organization cooperated with the Nazi regime, that they were anti-Semitic, and that Bandera was also anti-Polish,” said Jakubin.

“After Euromaidan, some people have tried to create a new image of Bandera as a person fighting the Soviets for Ukrainian independence.”

_Euronews has reached out to President Zelenskyy’s office for comment. _

Every weekday at 1900 CET, Uncovering Europe brings you a European story that goes beyond the headlines. Download the Euronews app to get an alert for this and other breaking news. It’s available on Apple and Android devices.

infections continue to accelerate this week in Switzerland

infections continue to accelerate this week in Switzerland