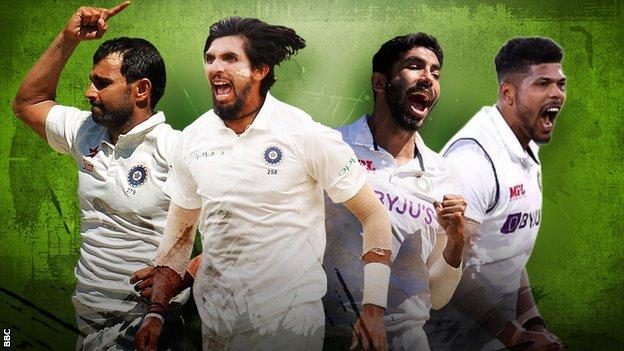 Spin is no longer the only danger in India.

Some 60% of India’s Test wickets have been taken by fast bowlers in the past four years, an increase of almost 20% on the previous 75 years.

Jasprit Bumrah, Mohammed Shami, Umesh Yadav and Ishant Sharma have done most of the damage – and England will be well aware of the threat posed by pace when the four-Test series gets under way in Chennai on Friday.

One almost became a policeman, another was more likely to be found asleep than at training.

Among India’s battery of quicks, Bumrah is undoubtedly the superstar.

The 27-year-old made his name – and his millions – in the Indian Premier League with Mumbai Indians, before an incredible start to his Test career.

“Whenever he is in a difficult position he just wants to give the ball to Bumrah.”

Bumrah is impeccably accurate, a skill honed in white-ball cricket, and in Tests is able to move the ball both ways at high speed.

Coming off a short run-up – a result of learning to bowl in a small back yard at the family home – Bumrah trots to the crease before whipping the ball towards the batsman at 90mph thanks to his rapid arm speed, front-on action and braced front leg.

Abishek Jhunjhunwala, who faced Bumrah early in his career, says: “We all thought ‘Who is this guy? What is this action? How has he been picked to play for Mumbai Indians?'”

Bumrah is not your stereotypical angry fast bowler either. His smile is never far away on the field and he enjoys listening to relaxing music.

“He is one of the nicest people I have ever played with,” Raina says. “He never celebrates like other fast bowlers. He is very calm.”

The sleepy one – Mohammed Shami

No fast bowler has as many wickets for India in the past four years as Shami.

The 30-year-old’s relentless control and ability to move the ball in the air and off the pitch has made him a key player.

It was not always this way.

“He was someone who loved his food and loved to sleep,” says Jhunjhunwala, Shami’s team-mate at Bengal and his first room-mate in first-class cricket.

“Whenever we were not playing a game the other Bengal players would do something. He wouldn’t come. He would literally be in bed all day – 18 hours out of 24 if we did not have a game.

“We all knew he had potential. It was always about his attitude. We all spoke to him about his fitness. We thought if he changed his attitude he would play for India.”

After an impressive 2012-13 domestic season, Shami made his one-day debut for India in January 2013 and played his first Test later that year.

“That is when he realised he was not playing for fun any more and was playing for his country,” says Jhunjhunwala.

Now more committed off the field, Shami remains relaxed on it.

“He is the quiet boy,” Jhunjhunwala says. “There is no aggression. We used to tell him he had to start swearing at the batsman more. He wouldn’t intimidate.

“Even in the dressing room he is not someone who will be chatting too much or jumping around.”

Shami, like Umesh, will miss the first two Tests against England with injury but could return later in the series.

The one who was almost missed – Umesh Yadav

Umesh, 33, has largely been India’s first replacement when Bumrah, Shami or Ishant have been injured in recent years, but still has a record to match the world’s best.

Blessed with an athletic build, he unsettles batsmen with genuine pace.

Umesh is also the India fast bowler that almost never was.

After leaving school he applied to join the police. Had he gained another two points in the selection process his life may well have taken a different path.

Umesh was playing second division club cricket in Nagpur when an umpire spotted a quick but wayward bowler running in wearing studded boots rather than spikes.

That umpire was the brother of Pritam Gandhe, the captain of the local first-class team, Vidarbha, who invited Umesh to the nets.

“He did not have a clear run-up and was bowling from back behind the stumps, but was quick,” says Gandhe, who had 22-year first-class career. “I thought he had something.”

The captain was convinced, the selectors and coach less so.

“Initially, people were not very keen,” Gandhe says. “They said he was young, raw and not bowling a good line and length.

“My mind was clear. I was going to play him at any cost. If he bowled three balls on the spot per over it would be enough to get the opposition out.”

Aged 21, Umesh – or “Babloo” as he is known – played for Vidarbha against Madhya Pradesh in the Ranji Trophy.

“When the first drinks break came [former India and Madhya Pradesh batsman] Hrishikesh Kanitkar came to me and said ‘Who is this? I feel like am playing against a West Indies bowler.'”

Umesh took 4-72 in his first innings in first-class cricket. He has taken 148 in Tests for India since.

Ishant is the veteran of India’s attack, having played 97 Tests. The tallest of the quartet, he generates awkward bounce and has increasingly targeted the pads with a fuller, more probing length.

A stint in county cricket with Sussex in 2018, which he credits with a significant improvement in his career, reunited him with captain Ben Brown, a regular opponent on the under-19 international circuit.

“We reminisced on those days, which was mainly Kohli smashing us and India knocking off our score in an hour and a half in a 50-over game,” says Brown.

“Ishant is very funny and has a good sense of humour.

“We went out for a Wagamama’s and he told us the best dish on the menu was the firecracker but it would be too spicy for us guys so told us not to order it.

“He did and it absolutely blew his head off. He was embarrassed he couldn’t handle the heat.”

Ishant, 32, may not have handled that heat but he can create it in the middle.

“He is a lovely guy off the field but seriously competitive on it,” says Brown, before recounting a spell to former England batsman Ian Bell when Sussex met Warwickshire in the County Championship.

“There was an lbw decision we felt had gone against us and I had to go over and calm him down.

“He really ramped it up and bowled quick. He is a very fiery fast bowler.”

Ishant looks set to become the first fast bowler to play 100 Tests for India. Their blossoming battery of quicks suggests he may not be the last.

Ban on care home visits could be made ILLEGAL

Which Cryptocurrencies Do Crypto Casinos Accept?