Indian Covid variant is now in every council in England bar one, official data shows


The Indian Covid variant has now been detected in every part of England bar one, official data show as the mutant strain spirals out of control in the country.

Public Health England confirmed to MailOnline today the Isles of Scilly off the coast of Cornwall is the only area in the country to have not recorded at least one case of the ‘Delta’ variant.

Britain today recorded another 8,125 Covid cases in the biggest spike since February as worrying figures continue to push Boris Johnson towards delaying ‘Freedom Day’ and extending the current restrictions through summer.

The figure was a 30 per cent spike on last Friday’s and means that, since Monday, 34,789 people have tested positive compared to 22,390 between Monday and Friday last week.

Up to 96 per cent of all new cases are made up of the Indian variant, PHE estimates, with the number of positive tests being linked back to the strain more than tripling from 12,431 to 42,323 in just a week.

PHE estimates that the strain is 60 per cent more transmissible compared with the previously dominant Kent variant and that cases are doubling every four and a half days in some parts of England.

The Prime Minister today hinted ‘Freedom Day’ on June 21 could be delayed as he said the nation must ‘make sure that we don’t repeat some of the errors’ that have been made since the start of the coronavirus crisis. 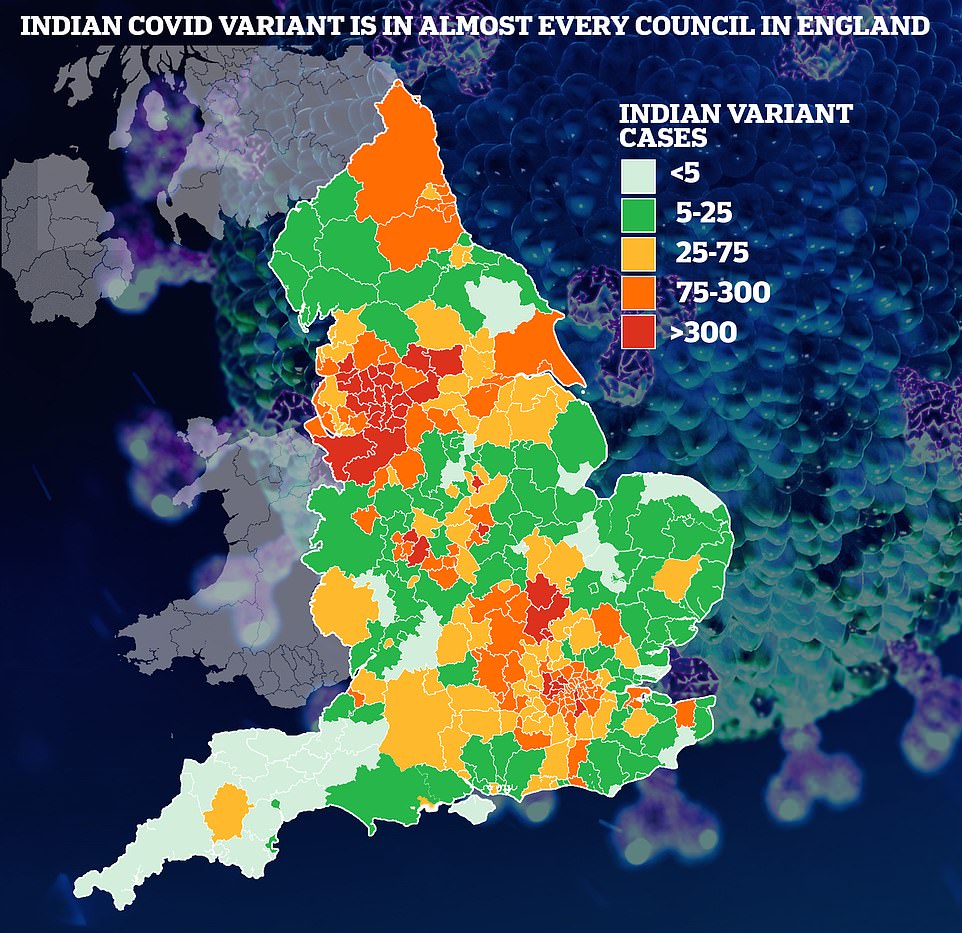 Public Health England data show there has been at least one confirmed case of the Delta Covid variant in every local authority area on mainland England. The Isles of Scilly off the coast of Cornwall are the only place still untouched 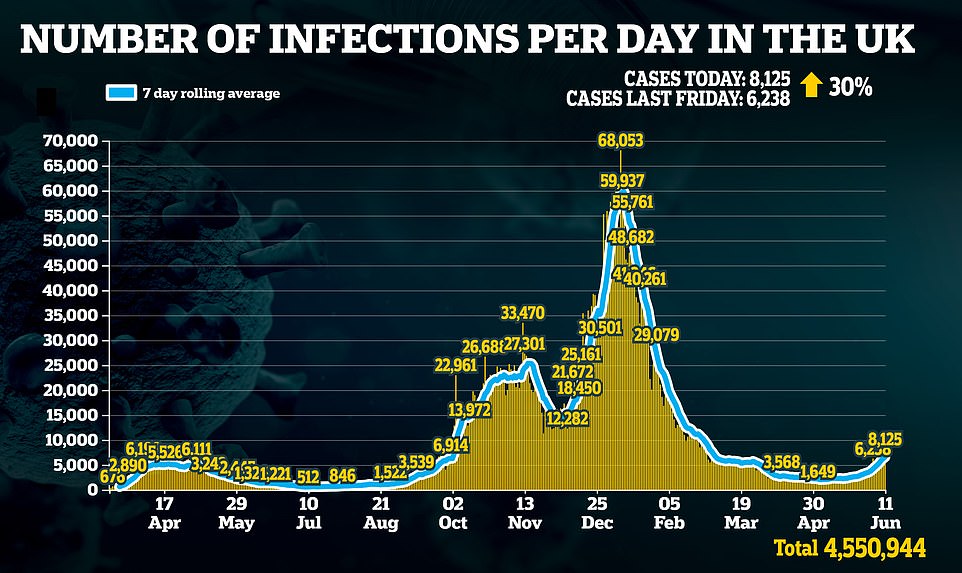 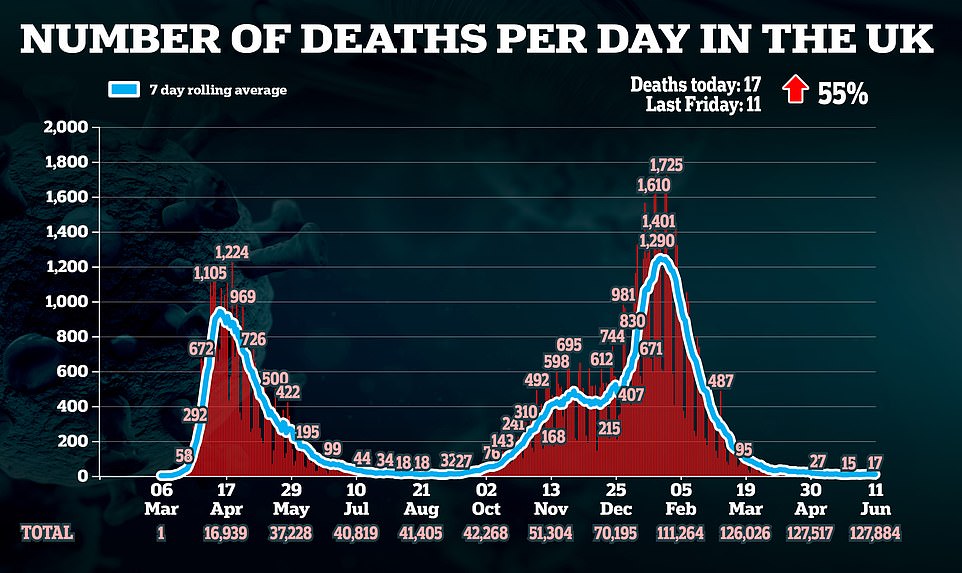 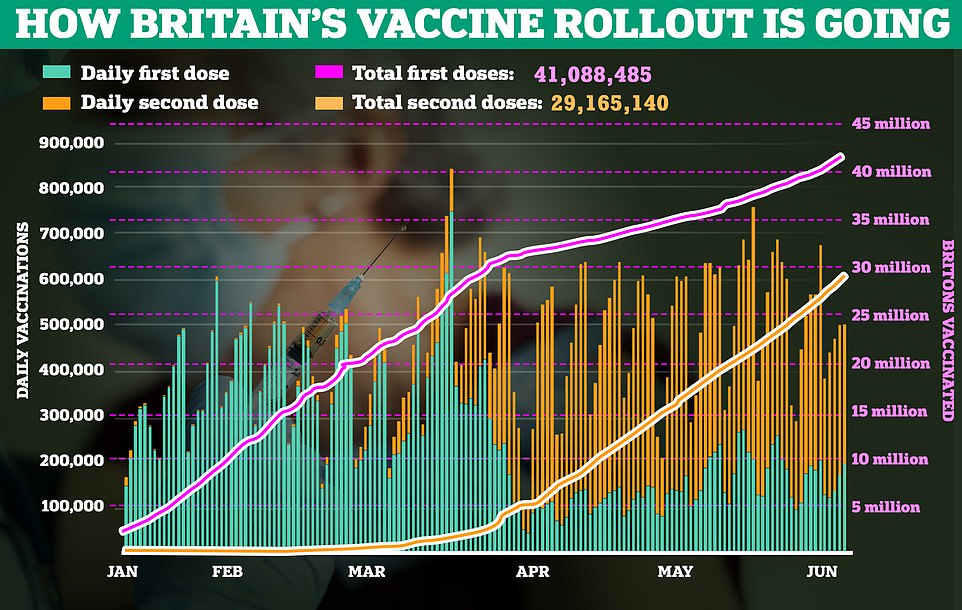 The Public Health England Data going up to May 27 shows half of council areas across the country had more than 40 new cases of the variant.

The true number is likely to be even higher because of the time it takes to work out which variant a positive test was caused by. Of the ten areas with the highest number of cases, eight are already under stricter lockdown guidance with residents urged to be cautious with travel and mass testing in place.

Birmingham (1,076) and Leicester (647) have not yet been issued with any special guidance.

Sefton Council, one of the 49 areas in England with more than 200 cases, told MailOnline it did not want to follow Greater Manchester and Lancashire

A spokesperson said: ‘Sefton’s current position varies greatly to that of areas of Greater Manchester and Lancashire.

‘Our local Public Health teams work closely with national PHE and DHSC colleagues and while we do not currently feel that greater restrictions in areas of Sefton are necessary at this time, we will of course continue to closely monitor the situation and the options available to us.’

PHE figures show that the number of positive tests linked back to the strain more than tripled from 12,431 to 42,323 in just a week.

Part of this increase was down to an improved testing system that speeds up the process of working out which variant someone is infected with, PHE said, but cases are rising in the real world, too.

The variant was only discovered in April but already accounts for 96 per cent of all positives, which is likely down to the fact that it is an estimated 64 per cent more transmissible than the Kent strain was. Experts say it appears better equipped to latch onto cells in people’s airways meaning less exposure is needed to trigger an infection.

Data that showed 8,288 Indian variant cases in the North West by June 7, compared to 2,325 in London, the second worst affected area. The NW cases were almost half of all those in England.

Public Health England data show how it took just a matter of weeks for the Indian ‘Delta’ variant to smash past the Kent strain and take over as dominant in England, with it surging to make up 96 per cent of cases in just nine weeks

The Office for National Statistics’ weekly infection survey suggested England’s outbreak grew by only 13 per cent last week to 96,800 total cases – compared to a near-doubling 75 per cent surge the week before

The R rate is highest in the North West, where it could be as high as 1.5. The region is the Indian variant hotspot and cases there have exploded in the past fortnight. A quarter of all the 7,400 cases announced in the UK yesterday were in the North West

AREAS WITH THE MOST CASES

Government critics were taken aback by the ‘terrible’ data and Liberal Democrat MP Ms Moran said: ‘These figures should set alarm bells ringing in Government as we approach June 21.

‘The Government must immediately explain to the public whether this exponential growth suggests the country is in line for a severe third wave, and if so what it is doing to prevent this.’

Meanwhile, Labour warned that the pace of the variant’s spread put the potential lifting of lockdown restrictions at risk.

Shadow home secretary Nick Thomas-Symonds said: ‘The pace at which cases of the Delta variant continue to rise is deeply worrying and is putting the lifting of restrictions at risk.

‘The blame for this lies with the Prime Minister and his reckless refusal to act on Labour’s repeated warnings to secure our borders against Covid and its variants.’

However, Downing Street has defended its borders policy in relation to the Delta variant.

Asked whether Boris Johnson regretted not putting India on the red list of travel restrictions sooner the Prime Minister’s spokesman said: ‘I would point to the tough border measures that we’ve had in place for a fair amount of time now.

‘We’ve ensured that anybody arriving from India needed to quarantine at home, and then later as you said they were put on the red list which means that people have to quarantine in a hotel if they arrive in the UK from India.’

The wrong side of history! Turkey's Merih Demiral scores the first goal of Euro 2020 in his own net