Rescue teams are searching for a 12-year-old girl who was buried under a 100 foot mountain of stinking refuse when it collapsed on Saturday at one of India‘s largest rubbish dumps.

As the search operation today entered its fifth day, hopes are fading fast of finding her alive.

Neha Vasava was on top of a 100ft mountain of refuse at Ahmedabad’s biggest rubbish dump – where she and her family desperately try to make a living – when it collapsed on Saturday evening.

Rescuers have since been sifting through tonnes of stinking garbage and braving feral dogs that roam the area, spread over some 80 acres. 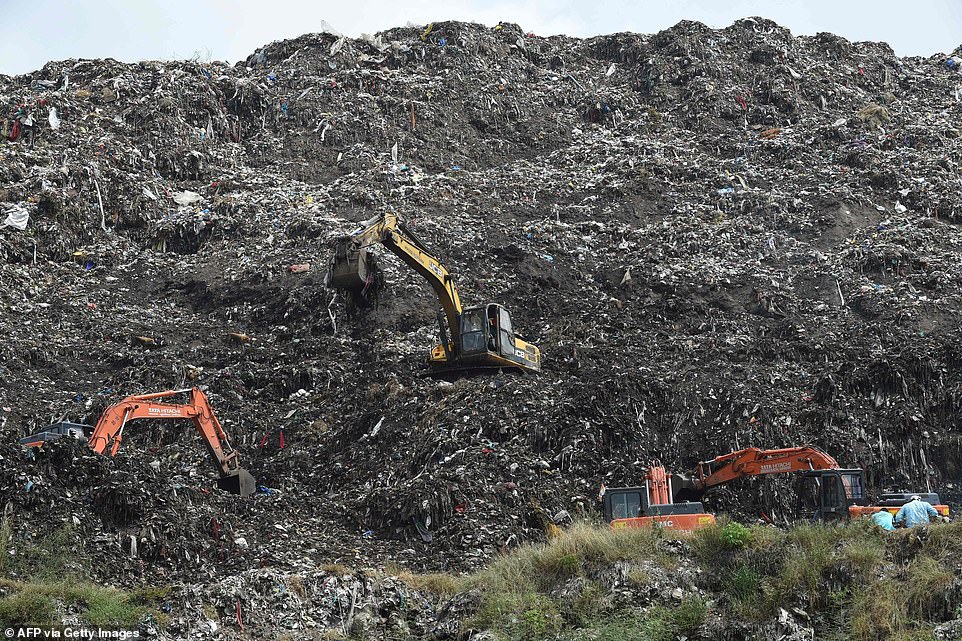 Pictured: Excavators work along side Ahmedabad Fire & Emergency Services and Gujarat Police personnel in their search for 12-year-old Neha Vasava who was on top of the 80-100 feet mountain of refuse at Ahmedabad’s biggest rubbish dump when it collapsed on Saturday evening 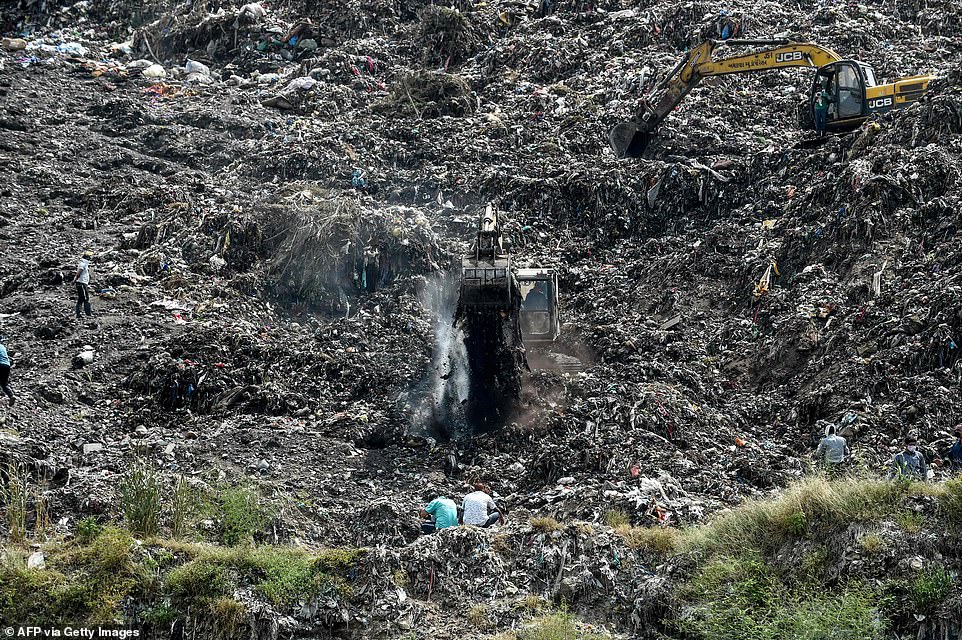 The search for the girl – which has seen rescue workers fighting through tonnes of stinking garbage and braving feral dogs – has entered its fifth day. Hopes of finding her alive are dwindling. Pictured: Men, dwarfed by the huge rubbish dump, search through the mountain of garbage along-side earthmovers 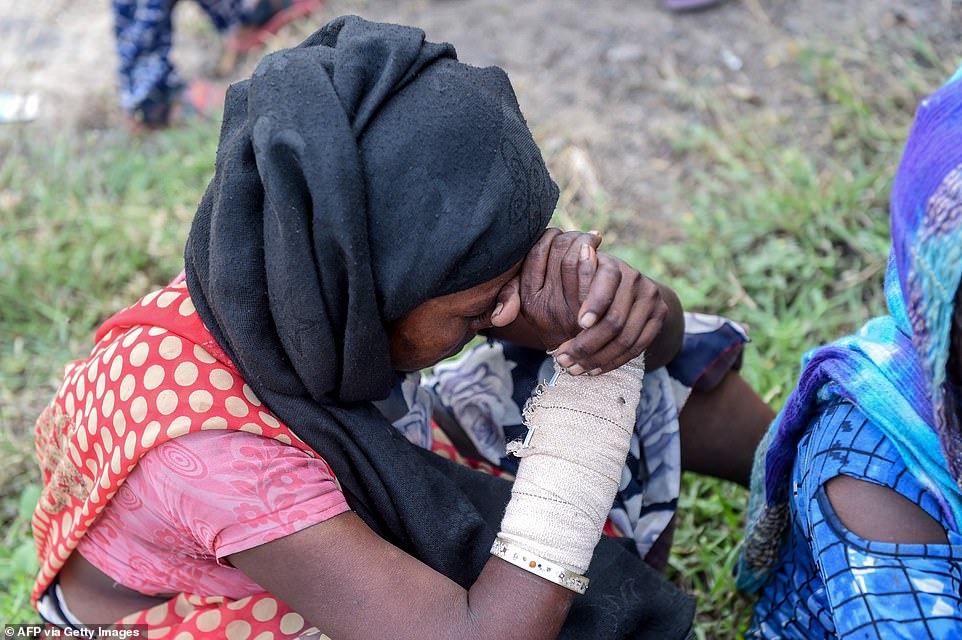 Ranjanben Manu Vasava prays at her house near the Pirana landfill as her daughter Neha, 12, is still missing after five days of searching. The family – along with hundreds of others – scour the rubbish dump for scraps they can sell off to make a living

An estimated four million Indians – many of them children – work in filthy, dangerous conditions as ‘ragpickers’, sorting through trash for metal and other materials to sell.

‘The chance of her being alive is negligible, but we will continue the search till we find her,’ fire officer Naitik Bhatt said Wednesday.

He said six earthmovers had been deployed in the frantic search, which had been made more difficult by a spell of rain.

‘A few hours after she got buried there was rain because of which more garbage could have fallen from the top,’ Bhatt told AFP.

A six-year-old boy, who was scavenging with Vasava, was rescued shortly after the collapse.

Nearly 3,500 tonnes of waste from Ahmedabad city is dumped at the site every day. 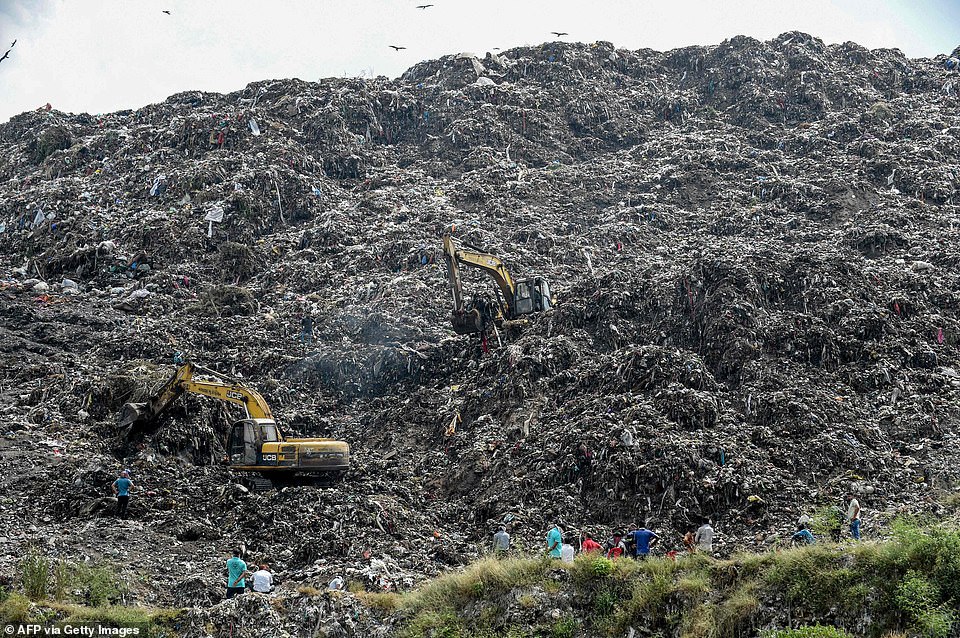 The dump, called Mount Pirana by locals because of its height, sees nearly 3,500 tonnes of waste from Ahmedabad city dumped at the site every day. A six-year-old boy, who was scavenging with Vasava, was rescued shortly after the collapse 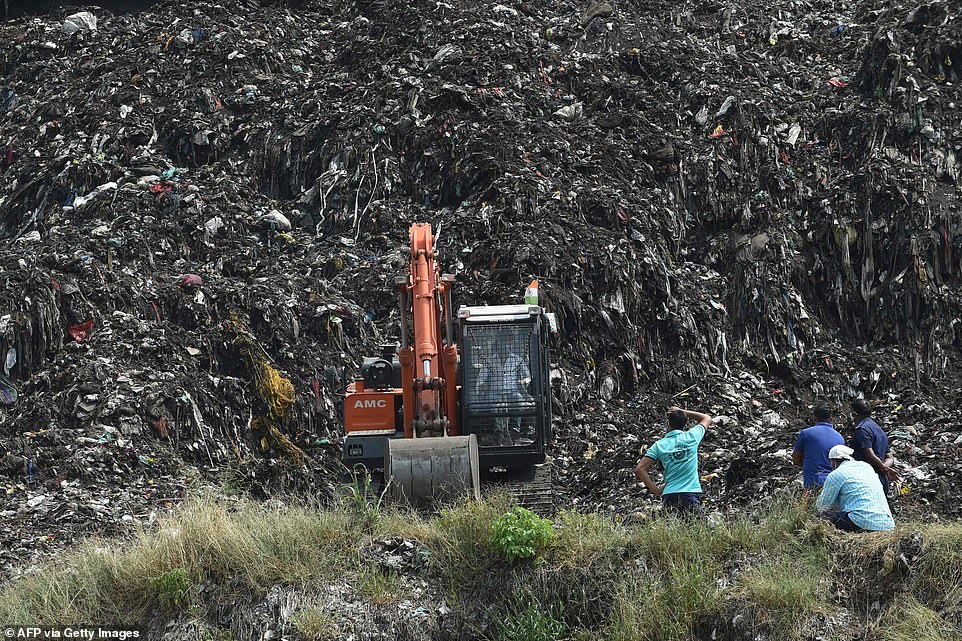 The dump, spread over 80 acres, is home to several hundred impoverished families who live nearby in shanties that have no piped water or sewage systems. The UN estimates that 41 million children under the age of 12 are forced to work in South Asia

The dump, called Mount Pirana by locals because of its height, is home to several hundred impoverished families who live in shanties without piped water or sewage systems.

‘We earn our bread by selling the scrap we collect from the dump,’ Mahesh, a ragpicker, told AFP.

‘We are lucky if we get picked up by some contractor for labour work… Otherwise the only option we have is to sell the scrap,’ added the 30-year-old, who was working without any protective gear.

Officials in Ahmedabad have vowed to dismantle the huge rubbish dump by August 2022, removing 300 tonnes of garbage from the side every day, using the salvaged materials for roads, fuel and other industries.

According to UNICEF, well over 41 million children aged under 12 are forced to work in South Asia.

India’s coronavirus lockdown is thought to have pushed more children into working after their parents fell into poverty, experts say.

According to official data India, home to 1.3 billion people, is the world’s second most infected nation, with more than 6.1 million cases, just behind the United States.

But the real figure could be 10 times the official figure, according to the latest serological survey – a study testing blood for certain antibodies to estimate the proportion of a population that has fought off the virus. The results were released yesterday.