Infamous Australian criminal Mark ‘Chopper’ Read will finally get his dying wish – starring in a film playing himself.

Read, a convicted gangland leader who once bragged of killing ‘four or seven people, depending on how you look at it’, died in 2013 from liver cancer.

Before his death he filmed scenes for an Australian movie called Pinball, which nearly 10 years later has just been completed.

‘I was tough on him as a director and he rose to the occasion and he responded like an actor, like he was doing it all his life, it was extraordinary,’ director Matt Holcomb told the Daily Telegraph. 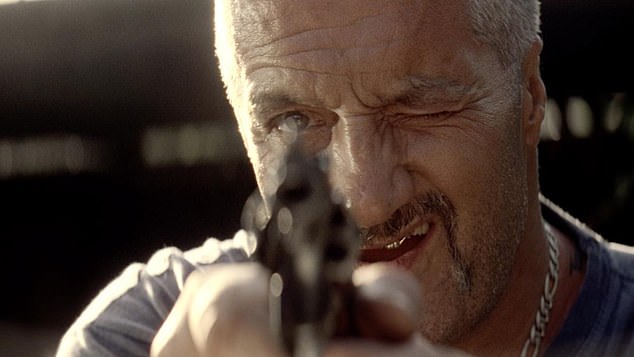 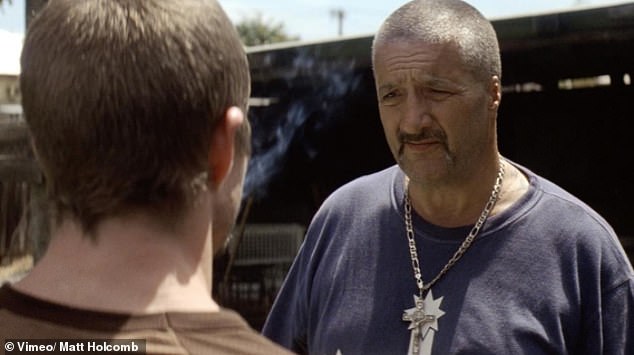 The killer-turned-children’s book novellist started filming the scenes shortly after being diagnosed with cancer, as the directors were intent on having him in the film.

Pinball tells the story of an Australian Rules footballer who becomes caught up in Melbourne’s infamous gangland underbelly.

Read appears in the film opposite Wolf Creek star John Jarratt based in Collingwood and on the Collingwood Football Club.

Chopper allegedly killed over a dozen people, but was never found guilty of murder, and instead rose to become a bestselling author whose life was turned into a big-hit movie.

Read, who spent 23 years in prison for a variety of crimes including assault and armed robbery, wrote several books detailing his long career of violence, including one entitled ‘How to Shoot Friends and Influence People’.

He gained his iconic look after a fellow prison inmate cut off his ears in the 1970s.

Brothers Matt and Trevor Holcomb are the minds behind Pinball, which looked as though it was not going to be made when they lost their producer in 2016 – but decided to revisit and rework the film during lockdown last year.

The directors said Read, who had his life featured in the 2000 film ‘Chopper’ starring Eric Bana, was a natural in front of the camera.

‘He loved it. I think it was something he had wanted to do for a really long time. He grew up watching Westerns and wanted to be an outlaw, or a sheriff,’ Holcomb said.

‘That was a big part of who he was. He loved history, the old West, so when I told him this was a crime western he was thrilled.

‘His eyes lit up. His screen presence is through the roof.’

In the images released of the film Chopper can be seen pointing a gun at the camera, suggesting the iconic killer may be replaying some of the moments from his criminal life.

The film is set to be played a several film festivals before an official release in 2023, a decade on from Chopper’s death. 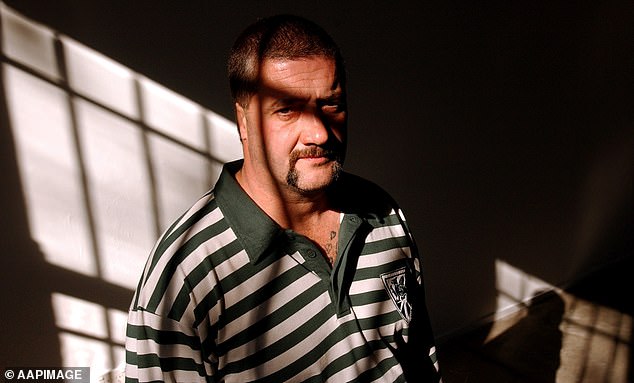 Read became a ward of the state in his teens and was certified medically insane three times, aged 15, 19 and 23.

Between the ages of 20 and 28, he only spent a total of 13 months outside prison gates, having been convicted of crimes including armed robbery, firearm offences, assault, arson, impersonating a police officer and kidnapping.

He rose in the underworld by stealing from drug dealers and ‘targeting criminals’ by claiming debts they owed each other.

He was known for torturing his victims with blowtorches, although he said in interviews he never hurt an innocent person.

He once tried to kidnap a judge at gunpoint in a failed attempt to get a friend freed from prison. He claimed to have survived being stabbed, shot, run over by a car and beaten in the head with a hammer.

His manager released a statement following his death in 2013 saying Chopper wished to be remembered as someone who ‘made many people laugh’.

‘A fortnight ago, Mark made his last public appearance in front of a sold-out audience at Melbourne’s Athenaeum Theatre,’ his manager, Andrew Parisi, said in a statement.

‘Despite his failing health, he delighted the audience with his skills as a raconteur and storyteller. This is how he would wish to be remembered, as someone who spun a great yarn and made many people laugh.’

Read was active on Twitter and had over 10,000 followers, to whom he posted a poignant message after his last performance stating ‘That was my last public appearance. That’s all she wrote, ladies and gentlemen.’ 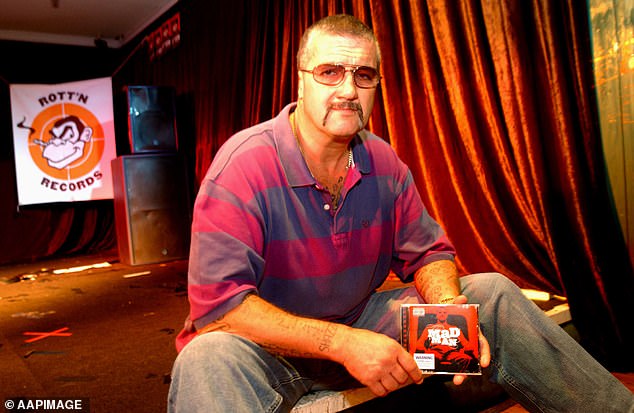 The film is set to be played a several film festivals before an official release in 2023, a decade on from Chopper’s death

PETER HITCHENS: I will never forgive the clowns who cancelled Remembrance Sunday