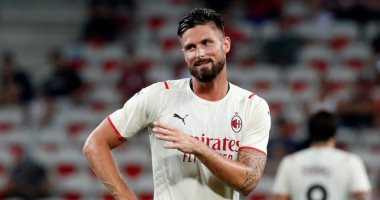 Italian press reports revealed the absence of French striker Olivier Giroud from the ranks of Milan against its guest, Venice, scheduled for Wednesday evening, in the fifth round of the Italian League, for not recovering from a back injury.

The Italian “Calciomercato” website stated that Giroud has been suffering from lower back pain since Liverpool’s meeting last week in the Champions League, and he failed to recover from it before tomorrow’s match, which made him not train with the team today, to confirm his absence from facing Venice.

The report added that Stefano Pioli, coach of the Rossoneri team, will continue to rely on the services of Croatian striker Ante Rebic in tomorrow’s match, in the absence of the Swedish star Zlatan Ibrahimovic.

Giroud starred with Milan by scoring a double in the 4-1 victory over his guest, Cagliari, in the second round of Calcio, before he was infected with the Corona virus.

The 34-year-old French veteran joined Milan during the last summer Mercato from Chelsea, with a two-year contract for one million euros.

Milan is in third place in the Italian league standings this season with 10 points, collected from winning 3 matches and a draw.

The Rossoneri had scored a 1-1 draw against its host Juventus last Sunday, in the fourth round of the Italian League.