Inside Pip Edwards’ VERY healthy fridge that keeps her youthful at 41: Michael Clarke’s ex shows off her fresh food haul and the $159 juice ‘reset’ program she swears by

She is known for her incredible figure and could give women half her age a run for their money.

And now Pip Edwards has revealed some of the secrets behind her fit physique and how she stays so youthful in her forties.

The P.E Nation designer, 41, gave her followers a sneak peek inside her healthy fridge and revealed her favourite juice and salad ‘reset’ program she swears by. 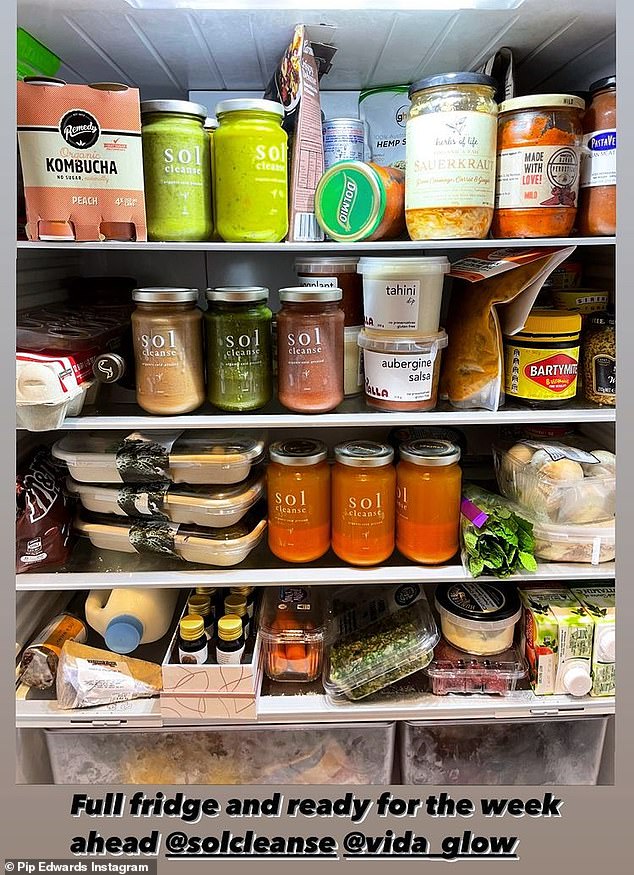 Inside Pip Edward’s VERY healthy fridge that keeps her youthful at 41: Michael Clarke’s ex has given her followers a sneak peek into her fridge, including the $159 juice ‘reset’ program she swears by

Drinks included bottled Golden Circle apple juice, which cost around $2.40 each, and a four-pack of organic kombucha, which retails for $8.75 a pack.

She also had a large collection of fresh juices and concoctions from Sol Cleanse -including juice packs, cleanses and ready-made meals. 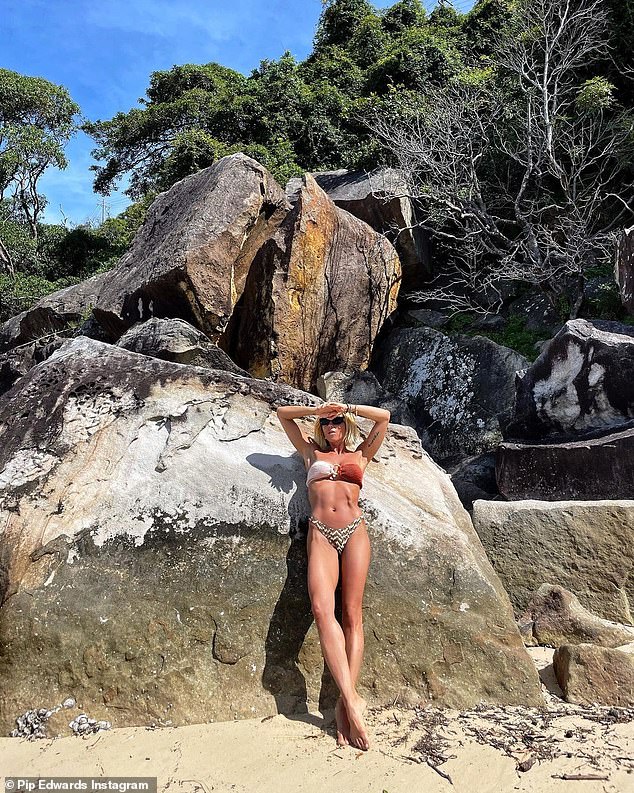 Fitness freak: Pip often shares her workouts on Instagram with fans and swears by Pilates to keep in shape 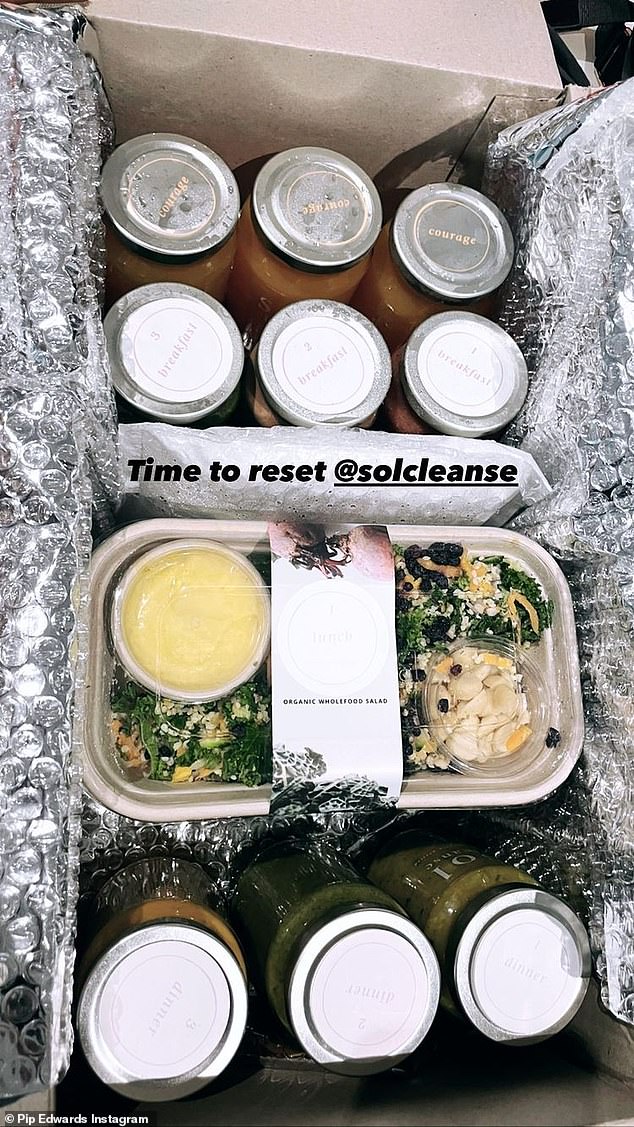 All about that health: Pip’s fridge also had a large collection of fresh juices and concoctions from Sol Cleanse -including juice packs, cleanses and meal packs

She recently purchased the Organic Autumn Food Pack, which is priced at $159 and features a range of salads, breakfast smoothies, juices and dinner soups.

One of the juices in Pip’s fridge was the Courage juice, which is said to target inflammation and oxidation.

On the naughtier side, perhaps for her teenage son Justice Maximus, was a large pack of chocolate M&Ms.

Pip often shares her workouts on Instagram with fans and swears by Pilates to keep in shape. 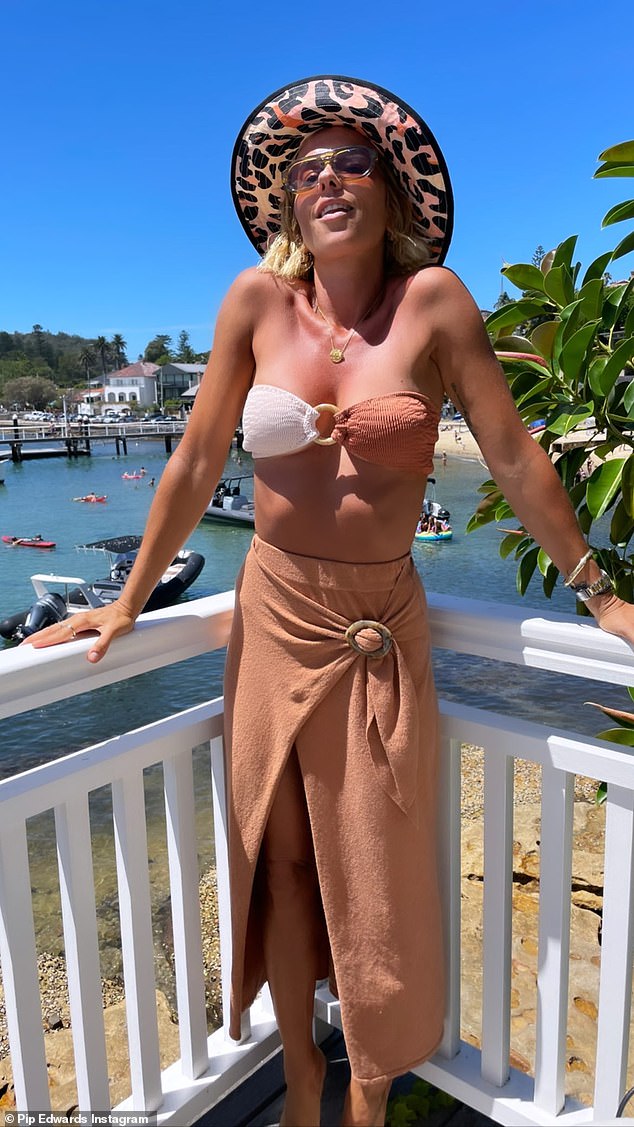 Hot to trot: The P.E Nation founder is known for her incredible figure and could give women half her age a run for their money 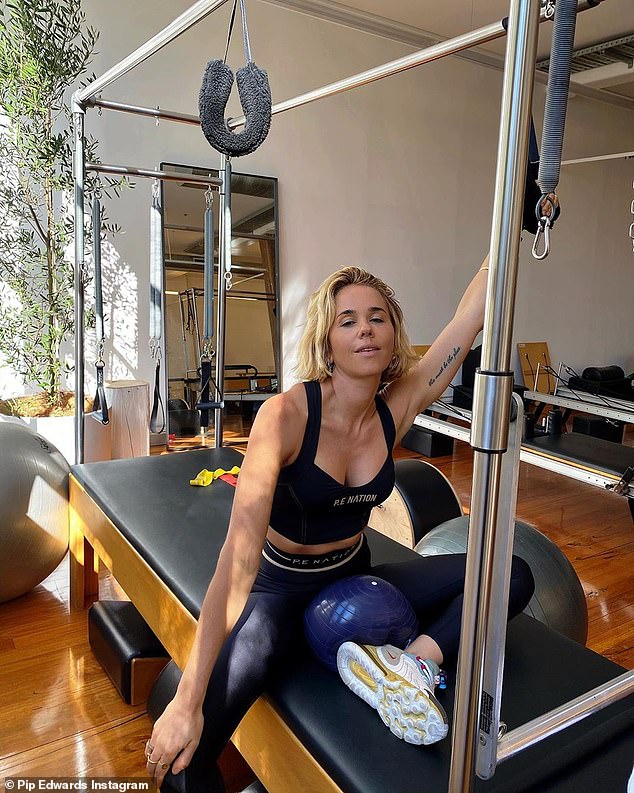 Sweat it out: The mother-of-one can be found at Fluidform Pilates on most days

Pip’s day on a plate

BREAKFAST: Boiled eggs with tabasco sauce and a skim mocha.

LUNCH: Soup or salad with coffee.

DINNER: Chicken with vegetables or bolognese.

She is also frequently seen on power walks around her home in Sydney’s eastern suburbs.

Pip has previously revealed that she loves vegetarian food and her diet ‘borders on vegan.’

‘I’m all about a vegetarian diet, bordering on vegan,’ she told Daily Mail Australia.

A typical ‘mid-week meal’ is roasted vegetables and salad with ‘some kind of soup’, while she also enjoys tacos when she’s being a bit more relaxed.

‘I always have eggs and tabasco in my handbag, I find it is the only quick thing I can snack on that is healthy and can also help to fill me up,’ she told the publication.

A typical day on her plate is boiled eggs and tabasco sauce for breakfast with a skim mocha, before soup or salad with another coffee at lunchtime.

‘Trail mix in the afternoon and crackers with Vegemite and cottage cheese for a snack,’ she told Elle.

Dinner is typically chicken with vegetables or bolognese or something else ‘hearty’.

‘If I snack into the night, it’s liquourice tea, cashews with dates, yoghurt with cashews or if I have a real sugar craving, I’ll tuck into a lot of Darrell Lea liquorice!’

Pip also swears by acupuncture, weekly saunas and a swim a week at Bondi Icebergs when it is open. 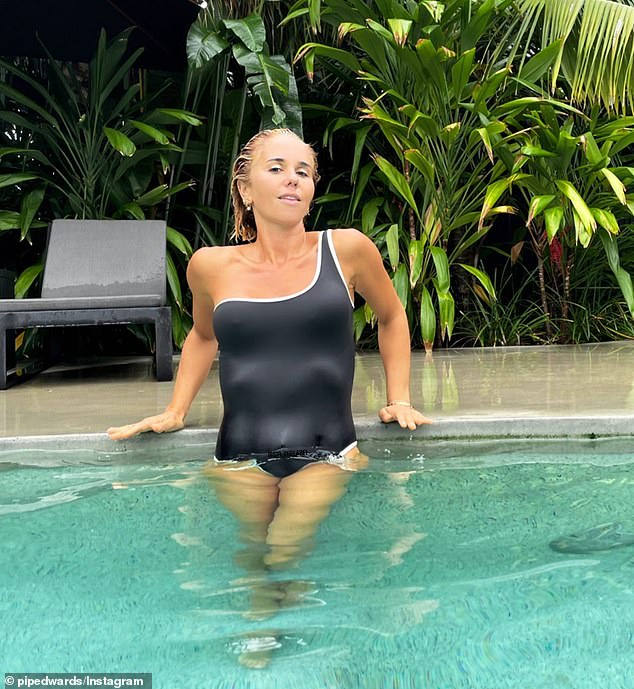 Her tips and tricks: Pip has previously revealed that she loves vegetarian food and her diet ‘borders on vegan’