An upcoming true crime adaptation will focus on a woman who was branded with a hot iron by a ‘sex maniac’ as a teen and decades later tormented, kidnapped, and stabbed by a mysterious assailant known as ‘The Poet.’

Netflix announced on Wednesday that it has acquired Corey Mead’s article ‘The Poet,’ which details the shocking case that baffled investigators in Wichita, Kansas, from 1977 to 1981 while the city was being terrorized by the BTK serial killer.

Published by Greg Nichols and Matthew Pearl’s digital magazine, Truly*Adventurous, the longform piece is based on hundreds of pages of never-before-seen documents and newly discovered sources, according to Deadline.

The true story focuses on Ruth Finley, who escaped a murderer when she was 16 only to find herself running for her life yet again while being stalked by a menace who sent her threatening rhyming letters. 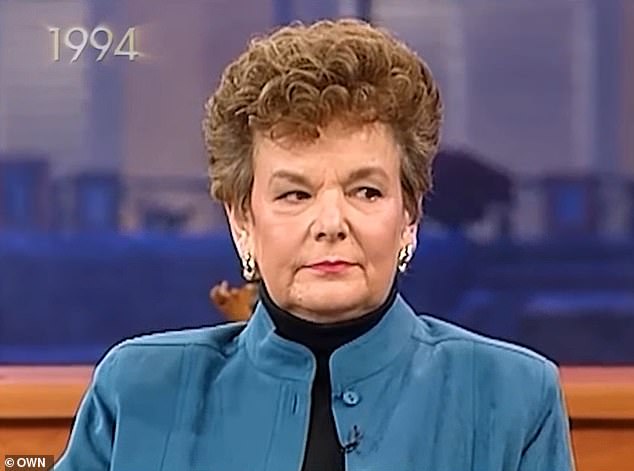 Thriller: Netflix is adapting Corey Mead’s true crime article ‘The Poet,’ which details how Ruth Finley (pictured in 1994) was tormented by a menace after escaping a murderer as a teen

In October 1946, a teenage Ruth had returned to her home in Fort Scott, Kansas, when a man opened the screen door and grabbed her from behind. She shoved her thumbs into his eyes as he tore at her clothes, enraging him.

The last thing she remembered was the man heating a flat iron on the stove. She woke up with first-degree burns on both of her thighs. A blurb about Ruth being assaulted by a ‘sex maniac’ was published in the Fort Scott Tribune the next morning.

Three decades later, in June 1977, Ruth was reminded of the terrifying attack when she received a threatening phone call from someone who asked her if she still wore her ‘brand.’

It had been a difficult day for the 47-year-old telephone company employee, whose husband Ed had suffered an apparent heart attack while working in their backyard. (It was later determined that Ed had collapsed due to an old injury from a car accident the year prior, not a heart attack.)

The mother of two grown sons was home by herself at night when the call came in. According to Ruth, the man told her that if she didn’t give him money, he would draw attention to the branding attack, telling her he knew where she worked.

Ruth expected more phone calls to come after she hung up, but none did. However, later that summer, she was in her office at Southwestern Bell Telephone Company, where she worked as a secretary, when she received an envelope containing a newspaper clipping of the Fort Scott Tribune article about her assault. 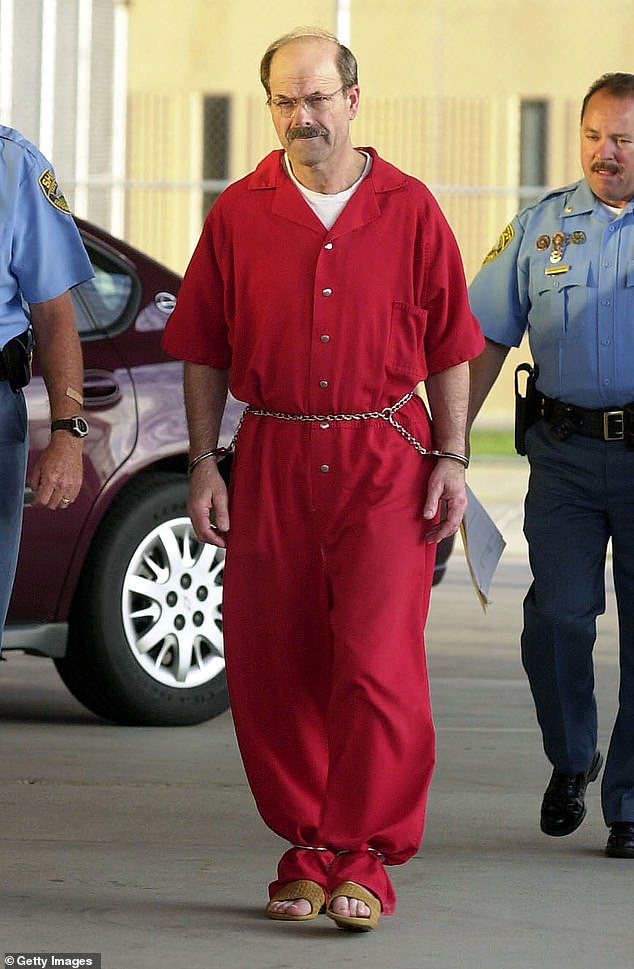 Scary: At the time, Wichita’s first serial killer, BTK (Dennis Rader), was also sending threatening letters and there was speculation he was The Poet. Rader is pictured in police custody in 2005

On November 6, 1978, Ruth and Ed went to the Wichita Police Department headquarters to report that she was being harassed with letters and had been approached by a man on the street on two separate occasions.

The messages were of particular interest to Lieutenant Bernie Drowatzky as Wichita’s first serial killer, BTK, was also sending threatening letters to police and newspapers three years into his gruesome crimes.

The serial killer, who was later revealed to be Dennis Rader, had given himself the nickname BTK, an initialism for ‘bind, torture, kill’ earlier that year. The Finleys’ police report came a year after BTK claimed his second victim.

A few weeks after their meeting with Drowatzky, Ed reported his wife missing. When she reappeared hours later, she told investigators that she had been kidnapped by two men while she was out shopping.

Ruth said they drove her around for four hours before she could escape, but she was unable to give the police a description of either abductor. While her sweater and shoes were found at the park where she had escaped, there was no other evidence.

Amid concerns that her stalker could be the BTK Killer, she was protected by police surveillance for five weeks, but nothing happened during that time.

Ruth was still receiving letters from the menace, whom Ed dubbed ‘The Poet’ due because of the violent rhyming messages sent by the perpetrator. The Poet eventually started sending threatening letters to the police as well. 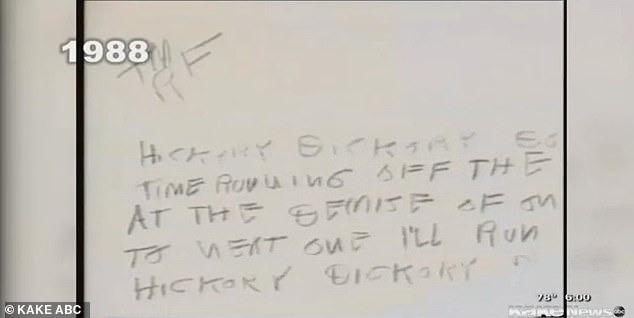 Mystery: From 1977 to 1981, Ruth received hundreds of letters from The Poet and found everything from a Molotov cocktail to a jar of feces on her front porch 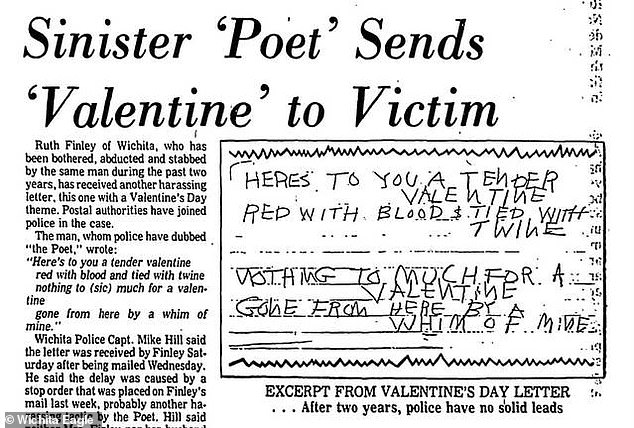 Headlines: Ruth also reported being kidnapped and was stabbed three times. The Valentine’s Day letter she received from The Poet in 1980 was published in The Wichita Eagle

On August 31, 1979, Ruth was admitted to the hospital with three stab wounds, one of which was nearly fatal. She told investigators that she was attacked by a man in a mall parking lot.

She continued to receive hundreds of letters threatening her harm and demanding money. The harassment continued to escalate in January 1980 when a 12-inch butcher knife wrapped in a red bandana was sent to her workplace.

The next month, she received a terrifying Valentine’s message that read: ‘Here’s to you a tender valentine/ Red with blood and tied with twine/ Nothing too much for a valentine/ Gone from here by whim of mind.’

A strip of a red bandana, one of The Poet’s signatures, was also found in the envelope.

In addition to the letters, the Finelys’ phone lines were cut on Christmas Eve, their Christmas wreath was set on fire, and a Molotov cocktail, ice pick, bottle of urine, and a jar of feces were all left on their front porch on different occasions.

Copies of The Poet’s letters were sent to psycholinguist Dr. Murray S. Miron, who stated the sender was ‘clearly and severely psychotic,’ ‘virulently pathological,’ ‘schizophrenic,’ ‘ extremely dangerous,’ ‘a wily and elusive quarry,’ and ‘a loner.’

Dr. Miron also noted that while The Poet and BTK Killer had ‘highly similar’ writing styles and pathology, he didn’t believe they were the same person.

Investigators had interviewed more than 300 people, but they still didn’t have any suspects. However, that changed in September 1981 when Chief Richard LaMunyon took over the case after The Poet threatened his wife in a letter. 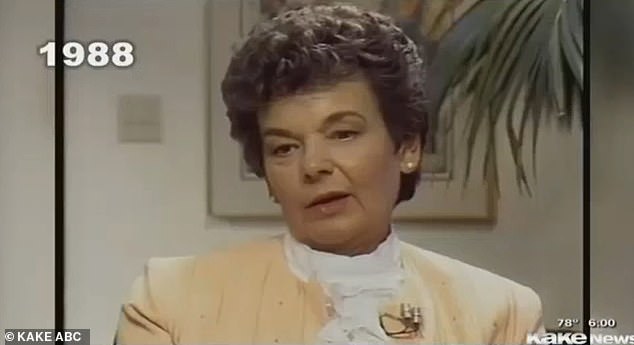 Twist: It was eventually discovered that Ruth was The Poet, and she confessed to unknowingly tormenting and stabbing herself while suffering from psychosis 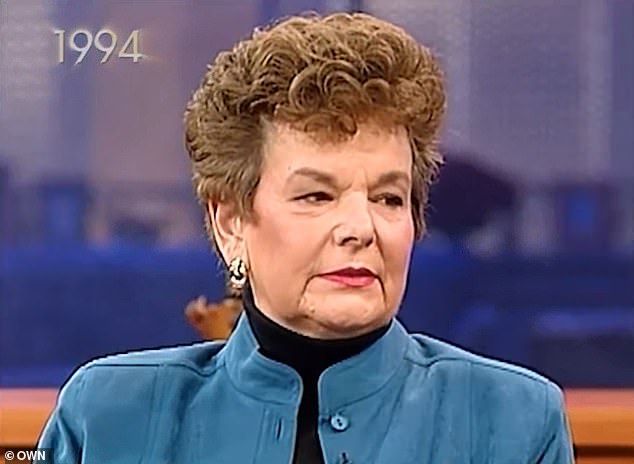 Diagnosis: A psychiatrist determined that she created The Poet to cope with the repressed sexual abuse she suffered as a child. She eventually shared her story on a local news program

LaMunyon soon came to the startling conclusion that Ruth was The Poet. He placed the Finleys under secret surveillance and Ruth was photographed mailing one of The Poet’s letters to herself.

Ed was cleared of any involvement in the hoax after taking a voluntary polygraph test in October 1981. During interrogation, Ruth admitted to threatening, kidnapping, and stabbing herself under the guise of The Poet while suffering from apparent psychosis.

The three-year investigation cost the police department a whopping $370,000, but no charges were filed against Ruth after a psychiatric examination determined her actions were not malicious.

‘Finley had unknowingly been tormenting herself as a result of psychiatric problems stemming from a childhood of horrific physical and sexual abuse,’ The Wichita Eagle had reported at the time.

Ruth spent years seven in therapy with psychiatrist Dr. Andrew Pickens, who had her write poems to help understand behavior. He learned she was raped by a neighbor when she was three years old and repeatedly sexually abused while being bound with a red bandana like the ones sent by The Poet.

Both Ruth and Dr. Pickens believe that her repressed childhood trauma was what led to her creation of The Poet. However, she maintained that the branding attack she suffered as a teen in Fort Scott was real.

Her husband and children stood by her, and she eventually shared her story with a local news program in the hope of helping other survivors.

European Super League brought down by heart of English football as fans of Manchester United, Arsenal and more unite