Insides the petty neighbourhood war over BINS between elderly residents


Residents of a retirement estate are locked in a bitter feud over the placement of wheelie bins on rubbish collection night.

Judy Bond, who lives on a quiet cul-de-sac at Stockland Retirement Village in Campbelltown, south-west of Sydney, on Thursday opened up about the dispute plaguing her street.

She explained that she has lived happily on the street for eight years, but things started going awry when her pedantic neighbour George started moving her green bins from where she put them on the nature strip, to her driveway.

‘That is a concern because that blocks the driveway for any emergency services that need to come in to residents in this area,’ she told A Current Affair. 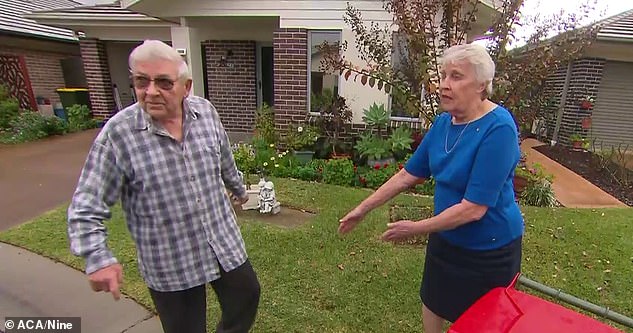 Pictured: George and Judy locked in a battle over where to put the wheelie bins on garbage collection night

She insisted her bins were only ever outside briefly and she was regularly one of the first to bring them in after collection – even helping other with theirs.

Judy said the village managers water and mow the verge so residents don’t need to, but George had a different story.

He claimed to water and fertilize the grass out the front of both his and Judy’s home, and does not want garbage bins sitting on the fruits of his labor.

According to George, the bin is supposed to be in the gutter – in front of the driveway – before it is collected by the garbage truck.

‘Is it the end of the world if it does go there?’ ACA host Brady Halls asked.

George replied: ‘The point is that the lady parks the bin here,’ he said, pointing at a patch of grass about three metres away from the road, near his letterbox.

Judy’s daughter Joanna then piped up and told the elderly man that her mother did not leave the bin that far up the verge.

‘She does not, George. She never, ever has put the bins there. Have you got photos of evidence?’ she asked.

Judy interjected and showed the host where she leaves the bins – on the grass, near the gutter – about five metres away from where George was pointing.

She also shared footage of George grabbing at her bins and moving them off the grass, while his wife said ‘we water it’. 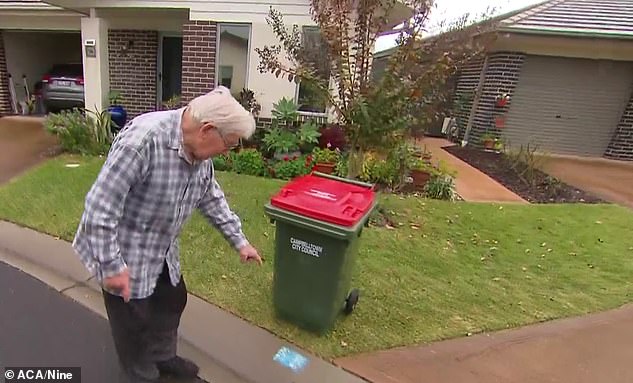 George thinks that where Judy places here bin (pictured) is incorrect, and often moves it to the driveway

Several professional and amateur video clips also showed a series of run-ins between the neighbours.

In one video, George can be seen pushing Judy’s bin back across the grass line, to the shock of both the neighbour and Mr Halls.

‘Not only has it affected her mentally, emotionally, physically – it’s exhausting,’ she said.

When three managers finally did interject during another row over the garbage, Judy was filming the situation unfold but claims someone in charge snatched her phone from her.

‘And as I was recording, one staff member sneakily came around and viciously snatched the mobile phone from my hand,’ she said.

‘I was shocked… I was stunned… how dare a staff member do that to a resident.’

Video shown on ACA of the shadow on the ground when her phone was knocked out of her hands appeared to back up her claims.

Mother and daughter are calling for an investigation over the phone snatching incident, and the bin crisis.

Judy claimed Stocklands asked her if she would like to move to another area in the village, rather than make an effort to resolve the issue.

‘No identifiable conclusion to the assault or to where the bins should be… and I find that disgraceful,’ Joanne said.

A Current Affair contacted Stocklands, but it refused to comment.

‘For reasons of confidentiality we cannot comment further on our investigation. We are not aware of any follow up action from police in relation to the reported incident,’ it said. 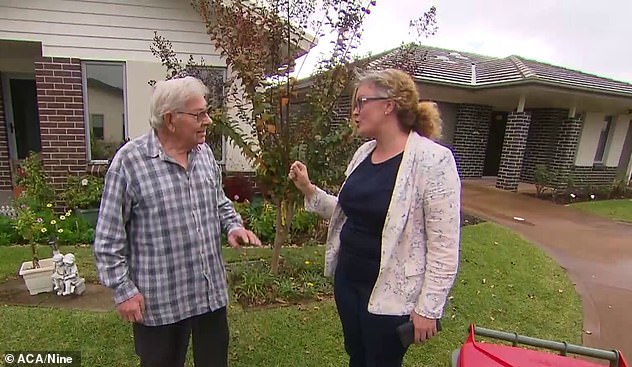 Pictured: George and Judy’s daughter Joanna, who accused him of calling the manager when her mother moves the bin back to the grass

Hundreds of viewers reacted to the story by saying they had experienced similar situations over bins with their neighbours.

‘I have neighbours who are going berserk because I used to have my bins beside my gate on what they maintain is ‘common ground,’ one wrote on Facebook.

‘They are inundating the landlords and agent with emails and my agent is responding by telling me to get them off his back.

‘I blame the pandemic for their behaviour and pray for the day they can resume cruising and just get off MY back.’

‘We have neighbours that like to get their bin emptied and then bring it over, in-between our neighbours’ bins to get emptied again,’ another commented.

‘We have had our bin not emptied because of this. We had to complain as talking to them did nothing.’

Another Facebook user said they thought George probably just ‘had pride in his grass’ and didn’t want a bin blocking the view.

‘Stick to your guns George,’ one person added.

One social media user explained exactly how each bin is meant to be placed on the street: ‘On each council website and info sent in the mail it shows you where to put/place you’re bins.

‘It’s poor planning and greed when there is no pathway between road and property line.’

Children In Need 2020: Alex Scott stuns in a little black dress as she kicks off the BBC One show

MBE at 21 for schoolgirls’ heroine: University student is the youngest to receive an honour

Relationship coach reveals how an 'imaginary person' helped strengthen her marriage - and she's not the...