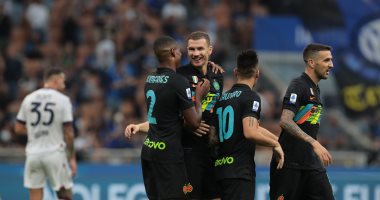 Inter Milan swept its guest, Bologna, 6-1, in the meeting that brought the two teams together this evening, Saturday, at the “Giuseppe Meazza” stadium, as part of the fourth round of the Italian League competitions for the current season 2021-2022.

In the second half, the Nerazzurri continued their sweeping attack, and managed to score another hat-trick through Uruguayan Matias Vicino and Bosnian striker Dzeko, with two goals, in the 54, 63 and 68 minutes.

Artur Thiat scored Bologna’s only goal in the 86th minute of the match.

Inter Milan rose to the top of the Italian league standings with 10 points, while Bologna’s balance stopped at 7 points in seventh place.