Iran announced Saturday it has started up advanced uranium enrichment centrifuges in a breach of its promises under a troubled 2015 nuclear deal, days after the start of talks on rescuing the accord.

The United States had said Friday that it had offered ‘very serious’ ideas on reviving the accord but was waiting for Tehran to reciprocate, something Saturday’s move notably failed to do.

The television aired no images of the injection of uranium hexafluoride gas into the cascades, but broadcast a link with engineers at the plant who said they had started the process. 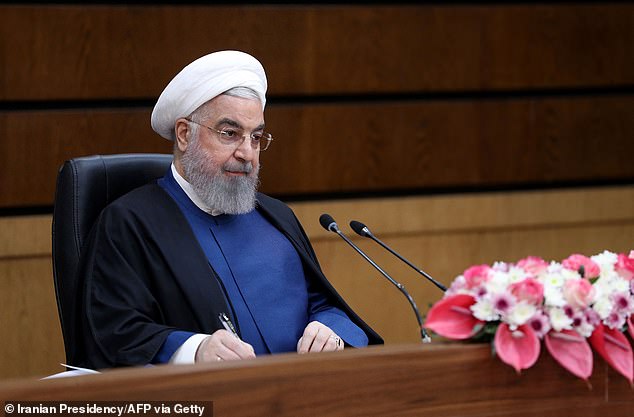 Iranian President President Hassan Rouhani inaugurated the three cascades of 164 IR-6 centrifuges, 30 IR-5 and another 30 IR-6 devices in a ceremony on Saturday 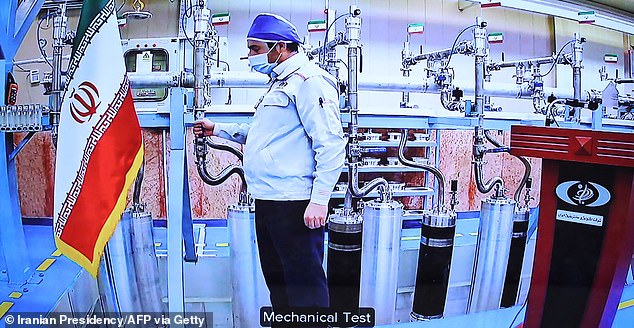 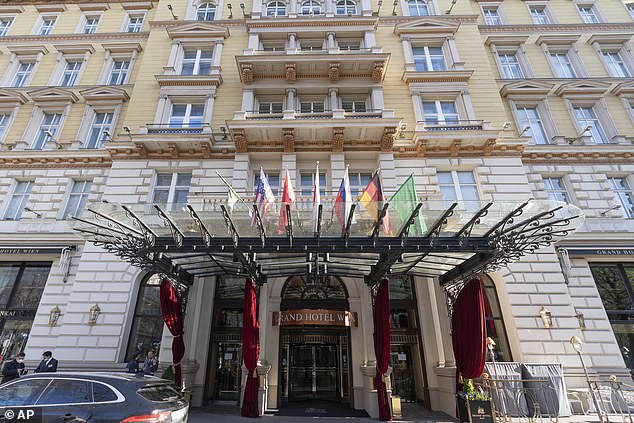 It comes as the diplomats of the EU, China, Russia and Iran held closed-door talks on reviving the nuclear agreement on Friday at the ‘Grand Hotel Wien’ in Vienna, Austria

Iran’s latest move to step up uranium enrichment follows an opening round of talks in Vienna Tuesday with representatives of the remaining parties to the nuclear deal on bringing the United States back into it.

Then-president Donald Trump withdrew from the deal in 2018 but his successor Joe Biden has said he is ready to return, arguing the deal had been successful in dramatically scaling back Iran’s nuclear activities.

The Vienna talks are focused not only on lifting crippling economic sanctions Trump reimposed, but also on bringing Iran back into compliance after it responded by suspending several of its own commitments.

All sides said the talks, in which Washington is not participating directly but has the European Union as intermediary, had got off to a good start.

Iran has demanded that the United States first lift all sanctions imposed by Trump, which include a sweeping unilateral ban on its oil exports, before it falls back in line with obligations it suspended.

The ‘US — which caused this crisis — should return to full compliance first,’ Foreign Minister Mohammad Javad Zarif tweeted, adding that ‘Iran will reciprocate following rapid verification.’ 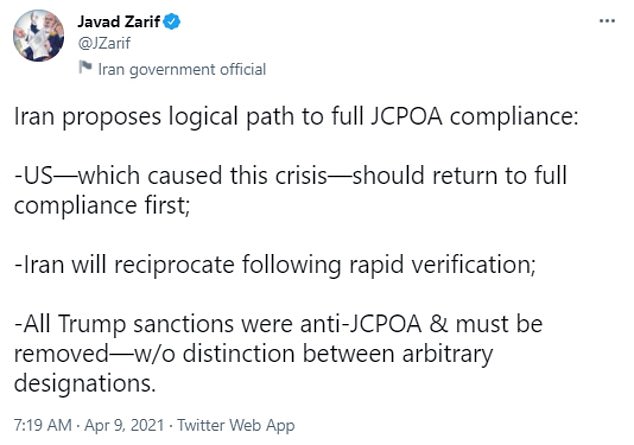 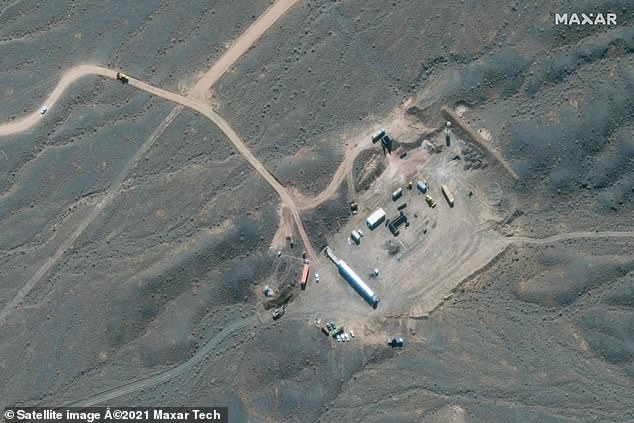 A satellite image of Iran’s Natanz nuclear facility, south of the capital Tehran, is seen in January.  Iran announced Saturday it has started up advanced centrifuges that enrich uranium

Washington has demanded movement from Tehran in return.

But the official said the United States was waiting for its efforts to be ‘reciprocated’ by Iran.

The US official indicated that the major stumbling block in the initial talks was not the order of compliance but rather which sanctions were under discussion, as Iran is demanding an end to all US restrictions.

The deal, formally known as the Joint Comprehensive Plan of Action, covers only nuclear sanctions and not US measures taken in response to human rights or other concerns, the official said.

The centrifuges started up on Saturday allow uranium to be enriched more quickly and in greater amounts than the Iran’s first generation devices, which are the only ones that the 2015 deal allows it to use.

Uranium enrichment can produce the fuel for a nuclear reactor, or in highly extended form, the fissile core of an atomic warhead. It is one of the most sensitive nuclear activities carried out by Iran.

Rouhani again claimed at the ceremony, which coincided with Iran’s National Nuclear Technology Day, that Tehran’s nuclear program is solely for ‘peaceful’ purposes.

Iran’s IR-9 centrifuge, when operational, would have the ability to separate uranium isotopes more quickly than the current centrifuges being used, thereby enriching uranium at a faster pace. 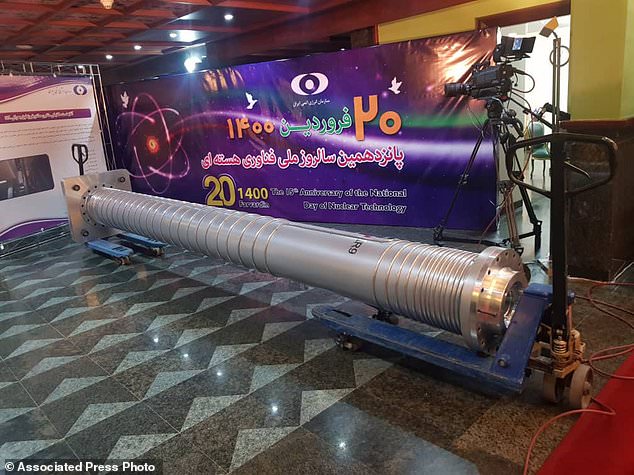 The new IR-9’s output is 50 times quicker than the first Iranian centrifuge, the IR-1. Above, Iran shows off its IR-9 in Tehran on Saturday 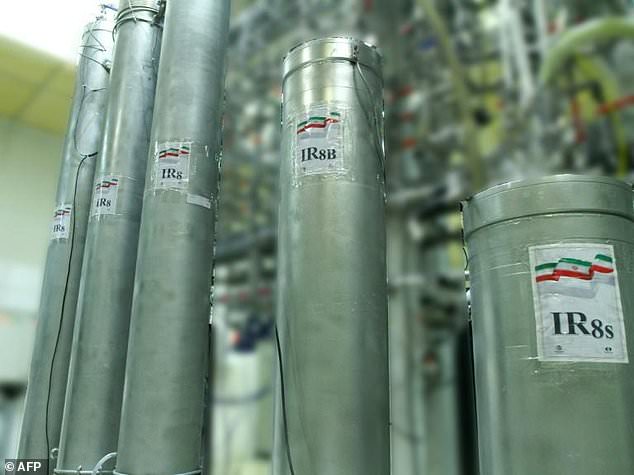 Since January, Iran has begun enriching uranium at up to 20 percent purity, a technical step away from weapons-grade levels, though Iran’s leadership insists the country has no desire to develop a nuclear weapon.

Trump pulled the U.S. out of the nuclear accord in 2018, accusing Iran of failing to live up to the agreement, opting for what he called a maximum-pressure campaign of stepped-up U.S. sanctions and other tough actions.

Iran responded by intensifying its enrichment of uranium and building centrifuges in plain violation of the accord, while insisting that its nuclear development is for civilian not military purposes.

Iran denies it is pursuing nuclear weapons, and says its nuclear program is for peaceful purposes.

Iran’s stockpile of 20 percent enriched uranium has reached 121 pounds, moving its nuclear program closer to weapons-grade enrichment levels. The amount of the material was 37 pounds in January.

Iran has installed 1,000 IR2 centrifuge machines and one cascade of 164 IR4 machines. Both are in operation and have more speed than the IR1 machines.

Since late February, Iran has ceased abiding by a confidential agreement with the U.N.’s nuclear watchdog reached as part of the landmark 2015 nuclear deal. The International Atomic Energy Agency has additional protocols with several countries it monitors. 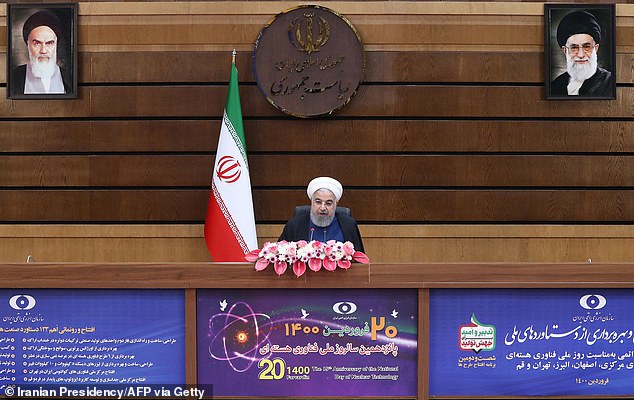 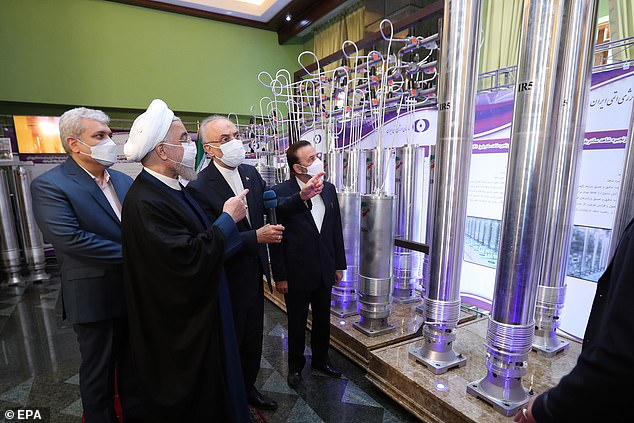 Under the protocol with Iran, the IAEA ‘collects and analyzes hundreds of thousands of images captured daily by its sophisticated surveillance cameras,’ the agency said in 2017. The agency also said then that it had placed ‘2,000 tamper-proof seals on nuclear material and equipment.’

However, Iran´s parliament passed a bill in December requiring the government to limit its cooperation with the IAEA and push its nuclear program beyond the limits of the 2015 nuclear deal. After the bill became law, Iran then began enriching uranium up to 20% purity and spinning advanced centrifuges – both barred by the deal.

Iran argues that the U.S.’s departure from the nuclear deal was the first violation of the deal by either county and therefore the U.S. must make the first move and remove sanctions before Iran returns to compliance.

President Joe Biden came into office saying that getting back into the accord and getting Iran´s nuclear program back under international restrictions was a priority. But Iran and the United States have disagreed over Iran´s demands that sanctions be lifted first. That deadlock has threatened to become an early foreign policy setback for the new U.S. president.

Talks in Vienna aimed at bringing the U.S. back into the deal with Iran broke Friday without any immediate signs of progress on issues dividing Washington and Tehran.

Planning a post-vaccine vacation? Don't wait to book a rental car and be prepared for sticker shock

(Bloomberg) -- The fallout from the collapse of Sam Bankman-Fried’s FTX crypto empire has spread to a new corner of the electronic-asset current market.Most Browse from BloombergTraders’ concentration...

BOSTON (AP) — A federal appeals court has upheld the extortion and fraud convictions of a at the time-celebrated young Massachusetts mayor who was discovered responsible of extorting...

Planning a post-vaccine vacation? Don't wait to book a rental car and be prepared for sticker shock