Footballers for the Republic of Ireland were left stunned after being shown an ‘anti-English’ video featuring the 1916 Proclamation of Independence, the Easter Rising and the Great Famine as a motivational tool, it has been revealed.

In an incident now being investigated by the ROI Football Association, it is claimed manager Stephen Kenny showed his players the video before facing England at Wembley last week.

Numerous sources have told Sportsmail that members of the Irish squad were left shocked after they were shown a video depicting the history of Anglo-Irish relations before last Thursday’s friendly at Wembley in what is said to have been an attempt, by Kenny, to motivate his squad ahead of the game.

The three-minute video featured goals from previous Irish wins in games between the two countries but is also said to have featured representations of the Easter Rising and the Great Famine. The final clip is reported to have showed a mock-up of ‘1916’ on the scoreboard at Wembley.

One source described the video as ‘propaganda’.

The FAI’s investigation leaves Kenny, who was only appointed as head coach in April, fighting for his job.

Previous Ireland managers have used the fractious historic relationship between the two countries to varying degrees in attempts to inspire players ahead of matches against England.

But last week’s ploy certainly took some by surprise and appears to have overstepped the mark of political correctness – particularly given a number of players also have English roots – in the eyes of certain individuals. 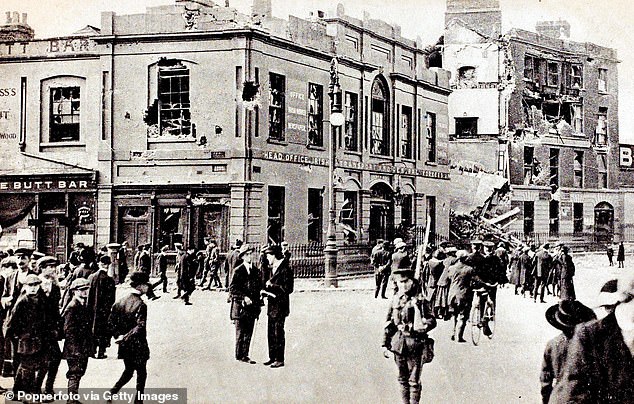 A picture showing the scene at Liberty Hall in Dublin in 1916, the year of Ireland’s Proclamation of Independence 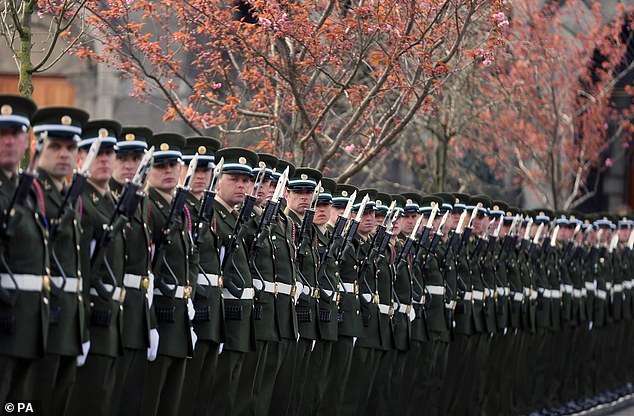 Three players in the squad who were born in England and have lived there all their lives were present at the meeting. They were Callum O’Dowda, Cyrus Christie and James Collins.

In 1916, 15 revolutionaries were executed for their part in an uprising against British rule, known as the Easter Rising.

The Easter Rising is one of the most famous chapters in Ireland’s struggle for independence. Also known as the Easter Rebellion, it was an armed insurrection staged in Ireland during Easter Week of that year.

It was mounted by Irish republicans who aimed to end British rule in Ireland and establish an independent Irish Republic at a time when the United Kingdom was heavily engaged in World War I.

Ireland’s Great Famine came between 1845 to 1849 and saw widespread poverty and starvation under British rule. It claimed the lines of around 1.2million people according to excess death figures at the time – an eighth of the population.

After being shown the video, Kenny’s men went on to lose the game 3-0.

The montage is said to have been shown to players during a team meeting before the game.

Some players and staff are understood to have privately complained about the video, which is said to have portrayed key moments in the history of English and Irish relations.

Irish goalkeeping coach Alan Kelly, whose father Alan Sr was from Bray and who captained and managed the Republic of Ireland, was also present.

He left the camp on Sunday for ‘personal reasons’.

Kelly could not be contacted for comment last night.

In a statement released to Sportsmail, a spokesman for the FAI said: ‘The Football Association of Ireland is aware of issues surrounding content shared with our senior men’s team ahead of the recent friendly against England at Wembley Stadium. 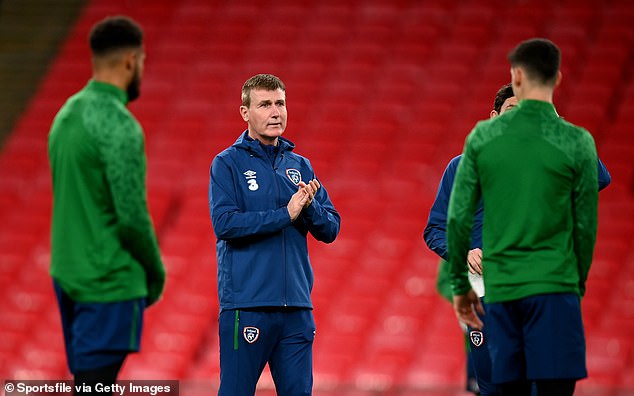 ‘The FAI is already looking into this matter internally as a matter of urgency to establish the facts. The FAI has no further comment to make at this time.’

It remains to be seen if the incident has any long-term repercussions for Kenny with regards to his job as Irish boss.

But it could certainly alienate members of his squad, who already appear to be struggling under his tutelage.

Kenny hasn’t won a single one of his eight games in charge since being appointed senior boss.

EU summit: Budget stalemate continues but Hungary not united in opposition to EU’s rule of law

EU summit: Budget stalemate continues but Hungary not united in opposition to EU's rule of law