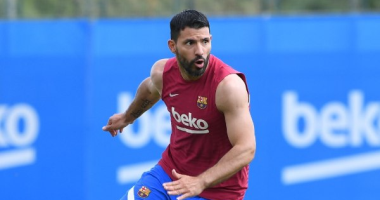 Press reports talked about the chances of Barcelona striker Sergio Aguero participating in the Spanish Clasico against his rival Real Madrid, scheduled for October 24, in the Spanish Premier League.

Barcelona had officially announced at the end of last May the signing of Argentine Sergio Aguero, the former Manchester City striker, on a free transfer deal.

The Spanish newspaper “Mundo Deportivo” said that Aguero, who was injured last August, began training in the gymnasium a week ago, and now feels that he is in good shape, and he may start group training in mid-October..

The newspaper indicated that if the development continues on its normal path, Aguero could participate for the first time with Barcelona in the group training after at least two weeks, before playing his first match with Barcelona to confirm his absence from the Clasico scheduled for October 24 at the Camp Nou stadium..

Sergio Aguero suffers from a hamstring injury in the right calf, and will be out of action for 10 weeks, according to the statement issued by Barca in August..