Is Britain’s Covid vaccine roll-out on the brink of disaster?


Britain’s Covid vaccination drive could slow by at least 75 per cent if AstraZeneca‘s jab is banned in people under the age of 50, according to leaked figures which could demolish the Government’s targets for inoculating young people.

Vaccine delivery figures from Scotland that were leaked earlier this year show that the British-made vaccine makes up three-quarters of the country’s jab supplies — but it is at the centre of growing doubts.

The UK’s medical regulator is considering suspending the AstraZeneca vaccine in younger Brits while it probes its link to deadly brain clots spotted in dozens of vaccinated people, with a decision expected as soon as today.

European medical regulators will announce the conclusions of their investigation at 3pm, with Germany having already temporarily banned its use for under-60s and France making the same controversial move for under-55s.

But the MHRA, which polices the safety of all vaccines in Britain, has yet to offer any updated guidance. It is said to be considering halting its use in under-50s, which could throw lockdown-easing plans into disarray.

Boris Johnson plans to lift restrictions fully by June 21 as part of the last stage of his roadmap, but this relies on jabbing the remaining 21million unvaccinated adults, the vast majority of whom are under 50, by the summer.

Officials have put the AstraZeneca jab at the heart of the country’s rollout and the leaked delivery schedule reveal the Government is expecting it to make up 75 per cent of its Covid vaccine supplies over the next two months.

The document, published on the Scottish Government’s website in January and quickly taken down, showed Britain was anticipating about 29.4m doses of AstraZeneca’s jab between April and the first week of June. For comparison, officials expected just 8.5m of Pfizer’s vaccine in the next two months and 1m of the new Moderna jab, which is being rolled out for the first time in Wales today.

However, the UK inoculation programme could be bolstered if two other promising jabs under review are given approval by the UK Medicines and Healthcare products Regulatory Agency in the coming weeks.

The chief scientist behind the US-developed Novavax vaccine, which Britain has secured 60million doses of, has said he expects it to be given the green light this month and rolled out in May. All of the Novavax supplies on order will be manufactured within the UK under a new Government deal announced last week, which could drastically speed up its distribution.

A separate vaccine made by American pharmaceutical giant Johnson and Johnson, which uses the same type of technology as AstraZeneca’s but is administered via a single injection, is slated for a summer rollout. Because people given the J&J vaccine don’t need a 12-week follow-up appointment, it means ministers don’t have to reserve supplies for second doses and can unleash them all at once.

Health watchdogs in the UK and EU are currently probing the link between the AstraZeneca jab and a rare brain clot, known as CVST, or cerebral venous sinus thrombosis, which can cause a stroke. 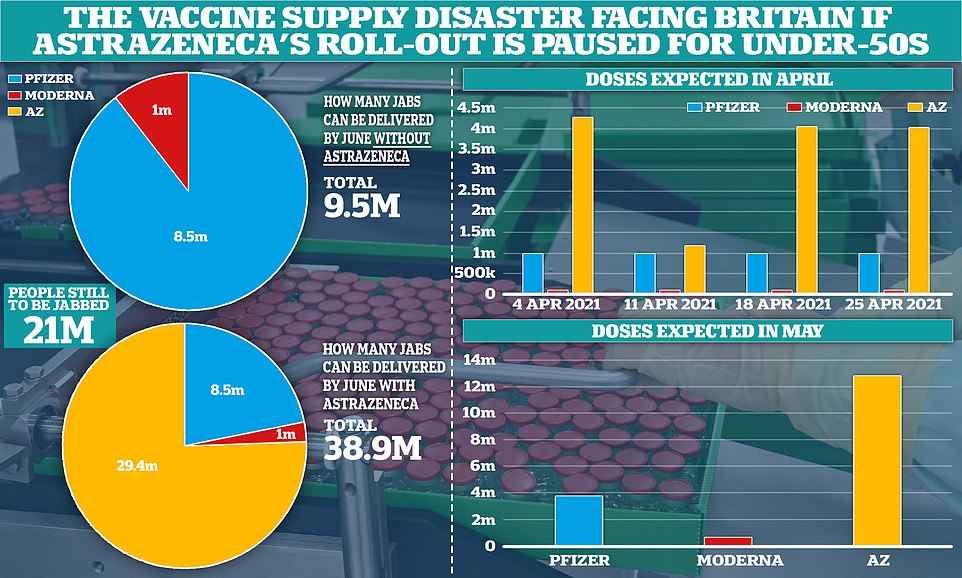 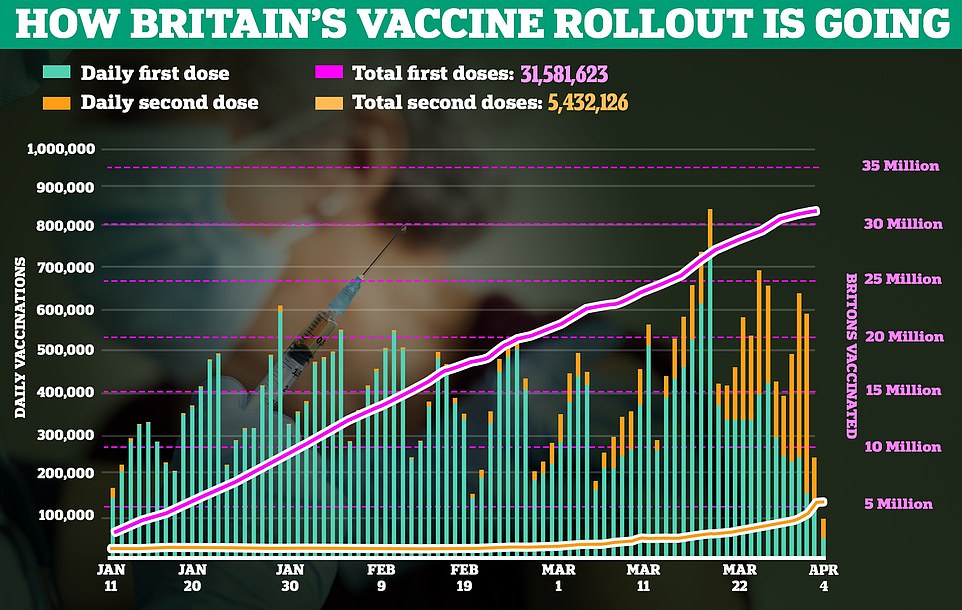 More than 31million Britons have received at least one dose of a Covid vaccine in the UK. Boris Johnson plans to lift lockdown fully by June 21 as part of the last stage of his roadmap out of restrictions, but this relies on jabbing the remaining 21million unvaccinated adults, the vast majority of whom are under 50, by the summer 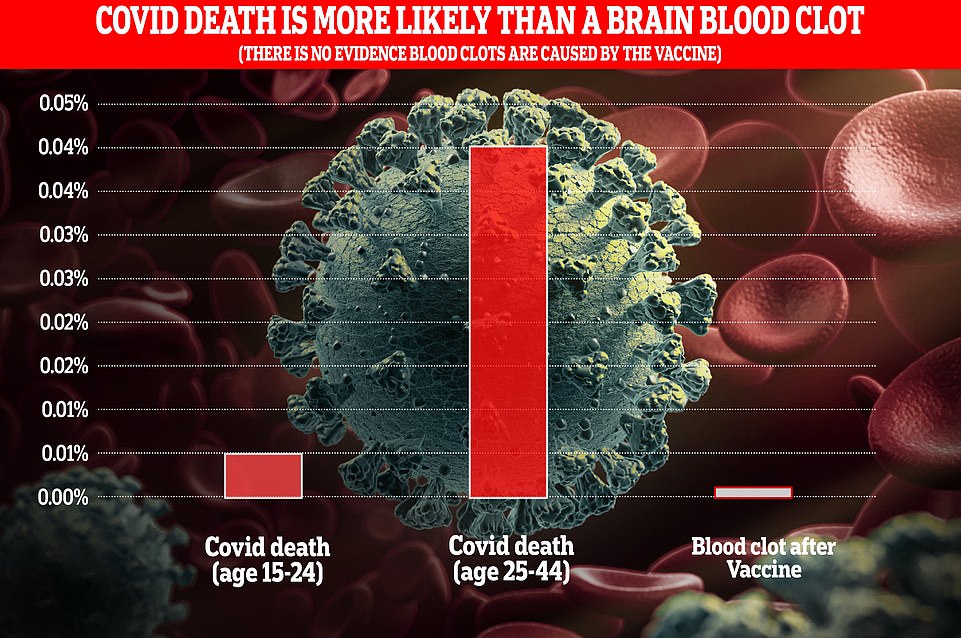 The risk of dying from Covid-19 is significantly higher than the rate of CSVT blood clots, which haven’t even been definitively linked to the vaccines (Based on fatality estimates from Cambridge University and CSVT occurrences in Germany)

Former Health Secretary Jeremy Hunt, who is the current chair of the Health Select Committee, today said there is ‘urgency’ over the MHRA review.

Number 10’s scientific advisers have already hinted that supplies of Moderna’s jab could be reserved for younger people, if the MHRA pressed ahead with a German-style ban. Professor Adam Finn, of the joint committee on vaccination and immunisation (JCVI), said the fears were being taken ‘very seriously’ and the UK is ‘walking a tightrope here between the need for speed but also the need for clarity’.

Experts have today rushed to defend the Oxford/AstraZeneca vaccine, with one expert saying aspirin is probably more dangerous, as the MHRA investigates claims it is linked to a rare brain blood clot.

He later added: ‘This vaccine is safe. What do I mean by safe? You can look right, look left, look right again cross a road, it’s safe to cross because you don’t see any cars (but) you can trip, you can stumble.

‘Nothing is risk-free, but is the vaccine safe? I would say yes.’

And yesterday he told Channel 4 News: ‘This has been done out of exceptional caution and the big story still is that for a middle-aged, slightly overweight man, such as myself, my risk of death is one in 13,000 – the risk of this rare clot, which might not even be associated with the vaccine, is probably one in a million.

‘So I’m still going to say it’s better to get the vaccine than not get the vaccine and we can pause and take time to carefully consider the value for children because they’re not at risk of death from Covid.’

And Ravi Gupta, professor of clinical microbiology at the Cambridge Institute for Therapeutic Immunology and Infectious Diseases, told Sky News the vaccination programme should continue until more is known on blood clots and the AstraZeneca vaccine.

He said people in their ’20s, 30s, 40s and 50s’ are at risk of severe Covid ‘and there is an argument for vaccination to continue in those individuals because the rate of this blood clot disorder is extremely low, although slightly elevated against background levels’.

Another JCVI member today said vaccinations for under-50s should be paused while the regulator investigates the risk of blood clotting.

Dr Maggie Wearmouth opened the possibility to ‘slowing things down’ until Britain’s home-grown shot is branded completely safe. She said: ‘The issue is about safety and public confidence. We don’t want to cover anything up that we feel that the public should be knowing.’

Last night Oxford University halted trials of its coronavirus vaccine in children until the Medicines and Healthcare products Regulatory Agency (MHRA) concluded on its safety in younger people, with formal advice expected in as early as today.

Scientists stress cases of CVST — the medical term for the complication — are extremely rare and have only been spotted in 30 recipients of AstraZeneca’s vaccine in Britain out of a total 18million. This equates to around one in 600,000 people. But experts say it may be more common in young women, who are known to be most at risk of the clots.

More than 31.6million adults have now received their first dose, putting Number 10 on course to meet its target of offering a vaccine to all over-50s by April 15.

However, the Government has not factored in a potential ban on using AstraZeneca’s vaccine in the next phase of the roll-out. The jab is currently the main weapon in the country’s arsenal, with Pfizer’s supply being rationed for top-ups.

Moderna’s vaccine was deployed for the first time in Britain today but ministers have only bought 17million doses — enough for 8.5million people. Leaked supply projections suggest No10 anticipated it would get around 160,000 doses every week next month, leaving serious questions about whether the UK will be able to make a dent in the next phase of the roll-out.

Today the Conservative former health secretary and current chair of the Health and Social Care Select Committee Jeremy Hunt told BBC Radio 4’s Today programme there is ‘urgency’ in the MHRA’s approach to making a decision on the AstraZeneca jab.

He said: ‘I think there is urgency. I think the one thing you can’t say about the MHRA is that they act slowly – they have been very, very fast and fleet of foot throughout this pandemic.

‘But I think people do understand that this is a new virus, these are new vaccines, there is no medicine that is 100% safe, and that’s why you have to look at these very difficult balances of risk.’

Asked if the MHRA would come to a fair and balanced decision, he said: ‘I think the regulator has got a lot of credit in the bank because what authorities need in a pandemic is to act fast and also to maintain trust and the MHRA which is our independent regulator was the first regulator in the world to approve a vaccine for Covid and in terms of trust they made that big call in January to space out the doses which has saved thousands of lives.

‘So I think people will listen to their advice when it happens today or tomorrow and I think they will be sensibly British and keep calm and carry on and follow that advice.

‘So that risk profile may change depending on age but there is tremendous public confidence in the vaccine programme.

‘People can see that because we have done it faster than anywhere else in Europe, our seven day death rate is down to 30 a day compared to nine times that in France, so I think people understand that the vaccine programme is saving lives but they also understand that advice changes as we get to learn more about these vaccines and so I think they will listen very carefully to the advice and follow it.’

Target to spend $2 billion with Black-owned businesses, pledges to add products from 500 companies by 2025

Target to spend $2 billion with Black-owned businesses, pledges to add products from 500 companies by 2025