Is Japan an opportunity for investors in the coronavirus storm?


INVESTING SHOW: Is Japan a golden opportunity for investors in the coronavirus storm?

As coronavirus shut down economies around the world, Japan stood out as one of the countries that managed to avoid a hard lockdown.

There were fears that Japan with its elderly population would suffer heavily in the coronavirus pandemic, but deaths have been low and its cash-rich companies have proved robust.

Japan’s economy has taken a hit but Nicholas Weindling, manager of the JP Morgan Japanese Investment Trust, says that the country has not been affected as badly as many people thought it would be.

Nicholas, who is based in Tokyo, joins Simon Lambert and Richard Hunter on this episode of the Investing Show to discuss how Japan has weathered Covid-19 and where he sees long-term prospects for growth in its stock market.

The fund manager argues that while many investors will think of global big name Japanese companies when they consider the country, this is not where the chances to profit lie.

Instead, he says that the companies further down the scale tapping into Japan’s consumer economy and helping fellow businesses adapt to the digital world can provide returns.

He says: ‘We’re investing in great companies that happen to be in Japan, not in the Japanese market itself.’

The JP Morgan Japanese trust is up 19.3 per cent since the start of 2020, compared to a 4.75 per cent gain for the AIC sector average trust.

It has ongoing charges of 0.69 per cent and shares currently trade at a 10 per cent discount to net asset value.

Nicholas says that while people often think of Japan as a very high-tech country – and in some places, such as Tokyo it is – much of the rest of the nation has some catching up to do with the rest of the world

He says: ‘In many ways Japan is lagging behind the rest of the world and that is the key opportunity. In Japan e-commerce is only about 8 per cent of total sales. It’s still very low and that is an opportunity.’

He also cites Japan’s low level of card payments, with 80 per Nicholas Weindling cent of transactions still done in cash – something which he says is going to change.

Nicholas argues that this means that for investors this means that the country’s companies have further to run in terms of growth that other major markets, such as the US, where much of the digital world’s gains have already been made. 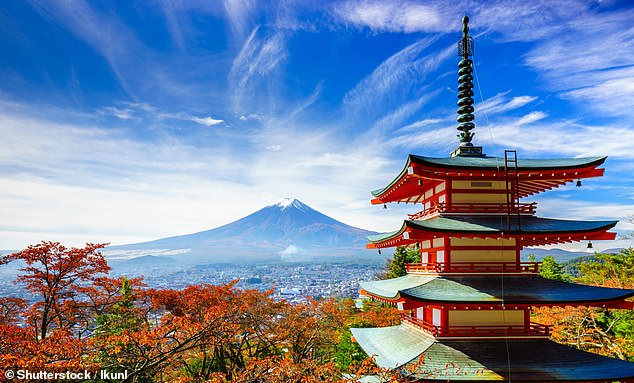 There were fears that Japan with its elderly population would suffer heavily in the coronavirus pandemic, but deaths have been low and it has avoided a strict lockdown

Bitcoin corrects after hitting another new ATH, this time above $61.8k

UEFA has refused a request from Munich's mayor for a stadium to be lit in rainbow...