Yazidis are a religious minority who lived in an uneasy existence with their Muslim neighbors in Iraq and Syria.

They originally numbered around 550,000 before coming under attack in 2014.

A genocide against the group was launched in 2014, beginning with ISIS attacking Sinjar City, Iraq.

The city, and neighbouring towns were hit on August 3 of that year, with Iraqi Kurdish Peshmerga fighters evacuating the area without warning civilians.

The people in the area attempted to defend themselves, but ISIS fighters  shelled local fighters and eventually broke through – killing anyone caught outside.

The Shiite Zainab shrine in the city was destroyed and anyone resisting was executed – with those left alive forced to convert to Islam and swear their allegiance to the group.

Amidst the fighting, some 200,000 people are believed to have attempted to flee Sinjar City and the surrounding towns and villages. 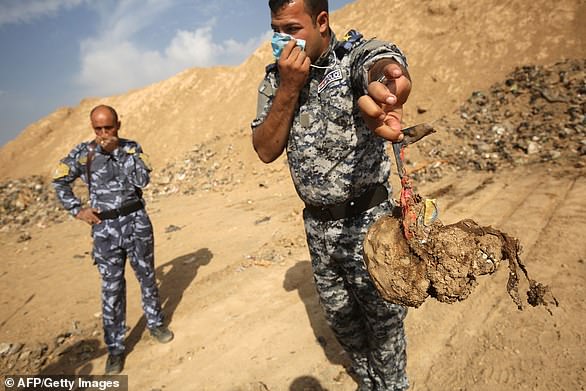 Pictured: A member of Iraq’s security forces holds out a skull as he and his comrade cover their noses from the stench at a mass grave uncovered in the Hamam al-Alil area in November 2016

Around 50,000 Yazidis fled into the Sinjar Mountains, where they were then trapped without food or water – with reports suggesting the group had been surrounded by ISIS.

Not all of the Yazidis in the area managed to escape to the mountains though, and reports at the time suggested hundreds still remained in nearby villages.

Around 300 men were killed in Hardan, 200 between Adnaniya and Jazeera and around 80 in Qiniyeh – while others were killed for refusing to convert to Islam.

During the mountainous siege, ISIS captured around 7,000 women and girls, forcing them to become sex slaves.

Any children that were captured were forcibly converted to Islam, taught Arabic and were banned from speaking their native Kurdish.

The United Nations described the massacres of the Yazidis as genocide with UN investigators estimating that more than 5,000 Yazidis were rounded up and slaughtered in the 2014 attack. 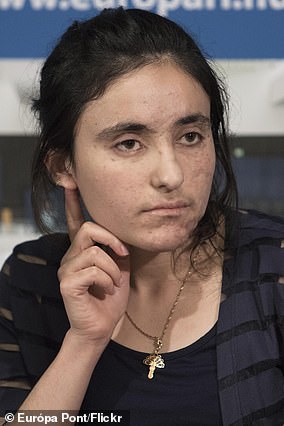 Pictured: Lamiya Haji Bashar, who at one time, was threatened with having her foot chopped off or execution after attempting to flee from her captors

In 2018, the UN reported that more than 200 mass graves containing 12,000 bodies, including women, children and the disabled, had been found in Iraq since Islamic State’s brutal three-year reign.

UN investigators verified 202 graves in northern Iraq as a ‘legacy of Isil’s terror’, according to a joint report by the UN mission to Iraq and UN office for human rights.

The graves date from 2014 to 2017 when ISIS ruled some of Iraq’s largest cities and towns.

Investigations have documented horrific accounts of abuse suffered by women and girls.

Having taken around 7,000 women and girls, initially, many of the women and children were handed out as gifts to fighters who took part in the offensive.

According to the Commission for International Justice and Accountability, ISIS’s ‘cabinet’ reportedly constructed a slave system, enforced by security agencies, under the supervision of Islamic courts.

The group operated centralised slave markets in Mosul, Raqqa and other cities.

At the market in the Syrian city of Palmyra, women walked a runway for ISIS members to bid on. Others distributed the women by lottery.

Managing the robust system turned out to be difficult, however.

Slaves were resold for personal profit. Some ISIS members made tens of thousands of dollars ransoming captives back to their families.

IS officials tried banning separating women from their children and the posting of women’s pictures on social media. They ruled slave sales must be registered by an Islamic court.

One woman, Taloo – who wanted her name known publicly as she campaigns for justice for Yazidis – said one owner forced her to get pregnant, before changing his mind and forcing her to have an abortion.

She only managed to escape, taking her daughter and sister-in-law with her, by paying a smuggler.

Nobel peace prize winner Nadia Murad has previously spoken about her own experiences at the hands of ISIL sex traffickers.

Writing in her autobiography, she said: ‘We could hear the commotion downstairs where militants were registering and organising, and when the first man entered the room, all the girls started screaming.’

The entrance of the men would terrify the women who, Ms Murad says ‘would double over and vomit on the floor’.

They would then ask if the women were virgins to which the vendor would reply ‘of course’.

She said: ‘The militants touched us anywhere they wanted, running their hands over our breasts and our legs, as if we were animals.’

Ms Murad had found herself at the hands of ISIS sex traffickers after her home village of Kocho in Sinjar, northern Iraq, was attacked.

She was captured alongside her sisters and lost six brothers and her mother.

Eventually Ms Murad was able to escape her ISIS captors, smuggling herself out of Iraq – she later went as a refugee to Germany in early 2015.

Elsewhere, in 2018, an Iraqi politician claimed that a Yazidi sex slave unwittingly ate her one-year-old son after ISIS fanatics cooked the child and served it with rice after starving her for three days.

The starving woman had been kept captive in a cellar for days without food or water before she was tricked by her guards, according to MP Vian Dakhill.

During a harrowing television interview, Dakhill told Egyptian TV channel Extra News: ‘One of the women whom we managed to retrieve from ISIS said that she was held in a cellar for three days without food or water.

‘Afterwards, they brought her a plate of rice and meat. She ate the food because she was very hungry. 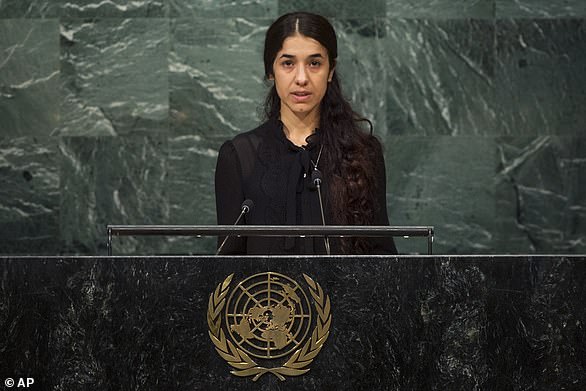 Nadia Murad (pictured here addressing the U.N.) was captured by ISIS sex traffickers when her home village of Kocho in Sinjar, northern Iraq, was attacked

‘When she was finished they said to her: “We cooked your one-year-old son that we took from you, and this is what you just ate”.’

Dakhill also revealed that one little girl, aged just ten, had been raped to death before her father and five sisters.

‘One of the girls said that they took six of her sisters,’ she said. ‘Her younger sister, a ten-year-old girl, was raped to death in front of her father and sisters. She was ten-years-old.’

Another harrowing account belongs to Lamiya Haji Bashar, who at one time, was threatened with having her foot chopped off or execution after attempting to flee from her captors.

During her time trapped in the IS heartland of Syria and northern Iraq, Lamiya saw children sold to old men as sex slaves, and she was forced to help make suicide bombs.

At one point Lamiya was thrown into a room to be gang-raped by 40 fanatics, and after, she and one of her sisters were sold to different fighters, fetching about £100 each.

Eventually, after multiple escape attempts, Lamiya was kept by a surgeon, who made her run errands in his hospital. She was given a mobile phone so that he could summon her – but Lamiya used it to contact an uncle in Kurdistan.

CZ shares what investors should know about Binance’s business model

CZ shares what investors should know about Binance’s business model