Italy beats Bulgaria in the European qualifiers for the World Cup 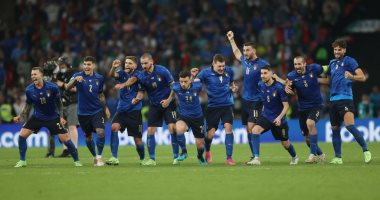 Italy will host Bulgaria at 9:15 pm today, Thursday, at the Artemio Franchi stadium in Florence, as part of the fourth round of European qualifiers for the 2022 World Cup in Qatar.

Italy leads the third group standings in the European qualifiers for the World Cup, with 9 points, combined from 3 victories, while Bulgaria comes with one point.

The Italian national team, led by Roberto Mancini, resumes the European qualifiers for the World Cup, with high spirits, after winning the European Nations Cup “Euro 2020”, on July 11.

The Azzurri are looking forward to continuing their domination of Group C, by winning the remainder of the European qualifying campaign, in order to qualify at the top of the group for the 2022 World Cup in Qatar.

Roberto Mancini and the Italian national team players are committed to qualifying for the 2022 World Cup in Qatar, after the historical disaster in the absence of the Azzurri from the World Cup in Russia 2018.

Mancini called up 34 players for the three matches against Bulgaria, Switzerland and Lithuania, respectively, in the qualifiers for the World Cup in Qatar.

The Azzurri squad witnessed the return of Roma star Nicolo Zaniolo after recovering from a cruciate ligament injury, while his colleague in the Wolves team, Leonardo Spinazzola, who suffered a torn Achilles tendon during Euro 2020 competitions.

The Azzurri are unbeaten in 34 official matches, just 90 minutes short of the all-time record set by Spain, which was set from 2007 to 2009.

To increase fertility and increase the chances of pregnancy.. Follow the Mediterranean diet