Honour viewers were left sickened tonight after Keeley Hawes’ DCI Caroline Goode revealed Banaz Mahmod’s killers were found ‘boasting and laughing’ about ‘stamping on her neck and raping her’ in the emotional first episode of ITV’s chilling new drama.

Bodyguard actress Keeley, 44, plays the detective who brought five murderers to justice in the tragic true story of the 20-year-old who was slaughtered by her own family for falling in love with a man of her own choosing.

ITV’s new two-part drama tells the powerful story of DCI Caroline Goode’s passionate search to discover the fate of Banaz, an Iraqi-Kurdish woman from south London, after she disappeared. Her father, uncle and two cousins were later convicted of her murder.

In tonight’s premiere, audiences at home saw one of the killers – Mohammed Hama, who had been arrested – ‘boast and laugh’ about the murder when calling his friends, unaware his phone calls were being monitored by the police.

Viewers were quick to react to the debut programme, with one writing: ‘Boasting of killing their own family, it is deeply disturbing.’

Viewers were left sickened after Keeley Hawes’ DCI Caroline Goode revealed Banaz Mahmod’s killers were found ‘boasting and laughing’ about ‘stamping on her neck and raping her’ in the emotional first episode of ITV’s new drama Honour. Pictured: Audiences at home saw one of the killers – Mohammed Hama laughing on the phone about the murder

Another horrified viewer wrote: ‘B*****ds. This is dreadful. That poor girl.’

A third added: ‘I don’t know the story behind this but the people who murdered that girl are disgusting, horrible people.’

In tonight’s episode, DCI Goode was seen searching for the woman after young Kurdish immigrant, Rahmat Sulemani (played by Moe Bar-El) reported the disappearance of his girlfriend, Banaz.

She had left her husband the previous year due to alleged physical and sexual abuse, returning to live with her parents in the South London borough of Merton. In real life, her estranged husband was never charged with an offence related to Banaz.

Viewers were quick to react to the debut programme, with one writing: ‘Boasting of killing their own family, it is deeply disturbing’ 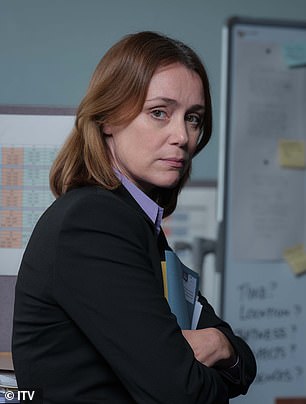 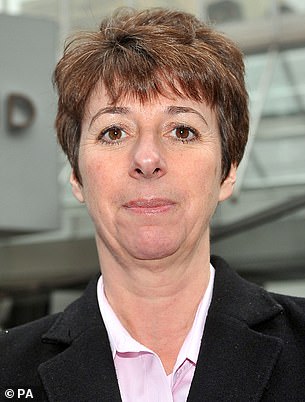 She had subsequently started a relationship with Rahmat, who explained to the police that for a Kurdish woman to leave her husband brought shame on the community, and especially after then picking a ‘love match’.

In the show, Rahmat claimed Banaz’s bullying uncle, Ari Mahmod, had threatened to kill him and his girlfriend, and Banaz’s father had made serious attempts on her life.

DCI Goode also discovered that the police had failed to help the young woman on five occasions, when she had detailed death threats and even attempts on her life.

The detective heard how one woman officer failed to believe Banaz’s father had attempted to kill her after piling her with alcohol, and even recorded her injuries as self-harm instead.

‘Now it’s five times Banaz has come to us to help, and five times we’ve failed her and I can’t even blame it all on the f****** men,’ DCI Goode yelled. 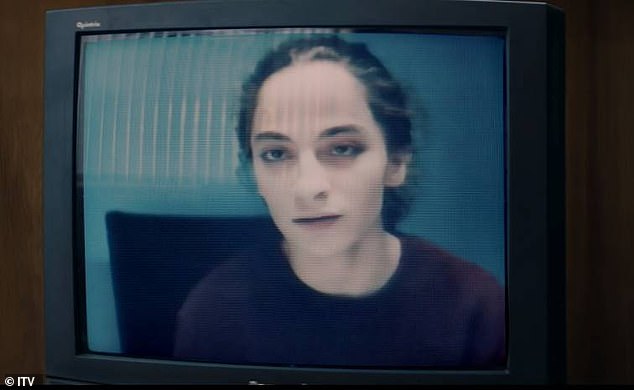 Banaz is played in the drama by Buket Komur. Pictured: Komur on screen as Banaz when she described in an earlier police interview the abuse she had suffered 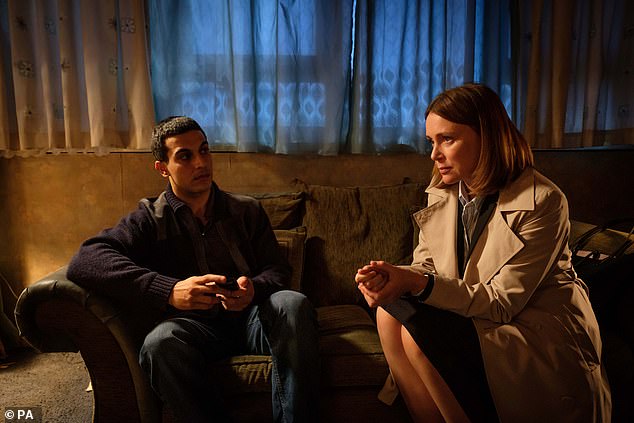 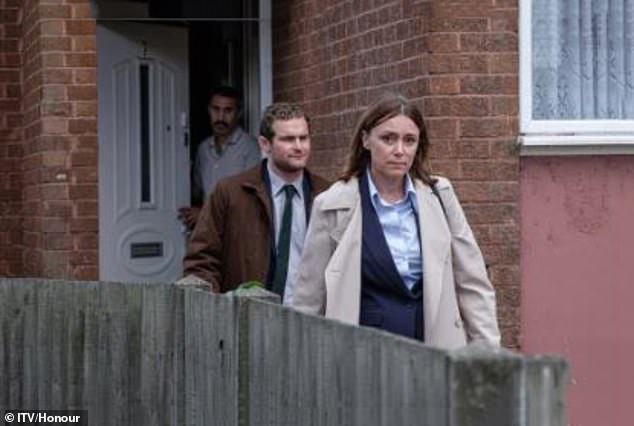 In the show, Rahmat claimed Banaz’s bullying uncle, Ari Mahmod, had threatened to kill him and his girlfriend, and Banaz’s father (pictured far left, by the front door) had made serious attempts on her life

Banaz even gave police a list of suspects, should she go missing, and eventually one of the men, Mohammed Hama, handed himself in for questioning, insisting: ‘I know nothing.’

But his statements didn’t add up and he was charged with the murder of Banaz in tonight’s episode, with DCI Goode requesting all his phone calls be recorded.

A translator soon delivered the news that the killers were ‘boasting and laughing’ on the phone to one another about what they did.

DCI Goode broke down in tears when reading the transcript, which said: ‘We were slapping her, f****** her, Mohammed put the cord around her neck and gave it to me.

‘I was holding on the cord so tight and stamping on her neck as well. I was saying let her soul be discharged. It didn’t take more than four or five minutes. She didn’t make a sound.’

Pictured left to right: Mohammed Ali, Omar Hussain and Mahmod, were all found guilty for the murder of Banaz, 20, in 2006, after she fell in love with a man her family disapproved

Following this DCI Goode told her team that she now believes Banaz was ‘killed on the living room floor of her parents home and this is now a murder inquiry.’

Viewers then saw Banaz father Mahmod arrested for her murder.

Honour was written by Vanity Fair’s Gwyneth Hughes and directed by Mrs Wilson’s Richard Laxton. Keeley has also served as an executive producer.

Talking about the ITV drama based on real-life events, Keeley said: ‘It is a privilege to be working on Honour as Buddy Club’s first ever project.

‘In a time where honour killings are still rife, it is critical to shine a light on such an important subject. Banaz Mahmod’s story, and DCI Goode’s subsequent investigation, is certainly one that needs to be told and I am proud to be a part of it.’

Banaz Mahmod, 20, an Iraqi Kurdish from south London, was raped and killed in January 2006 on the orders of her father Mahmod Mahmod after she left her alleged abusive husband and fell in love with another man, Rahmat Sulemani, who her family did not approve of.

She was raped, tortured and strangled to death with a bootlace after she walked out of a marriage she had been forced to enter just three years earlier at 17.

Her body was put in a suitcase and taken to the Midlands before being buried in a make-shift grave in a back-garden in Handsworth, Birmingham. 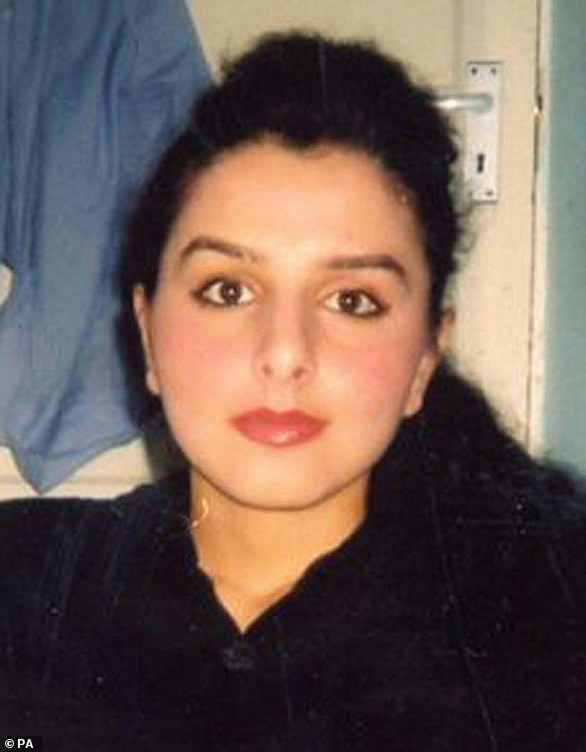 Banaz Mahmod (pictured), 20, an Iraqi Kurdish from south London, was raped and killed in January 2006 on the orders of her father Mahmod Mahmod

In 2007, following a three-month trial at the Old Bailey, her father, Mahmod Mahmod, was found guilty of murder and sentenced to 20 years in prison.

Meanwhile her uncle, Ari Mahmod, was also found guilty over the killing and sentenced to 23 years.

Mohamad Hama also admitted murder and was sentenced to at least 17 years in prison.

Three years later, Banaz’s cousins Omar Hussain and Mohamad Saleh Ali, who carried out the killing, were extradited from Iraq and given life sentences.

The young woman’s nightmare when she was forced to enter a marriage to a Kurdish man, then aged 28, who she later told police was ‘very strict’.

She had met her husband-to-be only three times before her wedding day and, according to Banaz, her husband regularly physically and sexually abused her.

Her estranged husband was never charged with an offence related to Banaz.

From December 2005 to January 2006 Banaz told police five times that her family had wanted her dead and described the sexual violence she had allegedly been forced to endure at the hands of her abusive husband.

In a recorded interview with police prior to her death, Banaz told an officer that she was being followed by members of the Iraqi-Kurdish community.

Mr Sulemani never recovered from the death of his beloved girlfriend and committed suicide in 2016, after reportedly telling police there was ‘no life’ for him.

I’ve just stopped smoking and want to get income protection – do I need to tell the insurer?

I've just stopped smoking and want to get income protection - do I need to tell the insurer?