Jack Dorsey is set to step down as CEO of Twitter


Jack Dorsey is expected to step down as the chief executive of Twitter, sources have told CNBC.

Reuters also reports that a successor has been named, and the company has been preparing for Dorsey’s departure since last year.

Dorsey, 45, was the CEO of the social media giant when it was first founded in 2006, and oversaw its startup

His reported departure comes after a major bust up between Dorsey and Elliott Management, a hedge fund run by Paul Singer which has a substantial stake in Twitter, which ended in the hedge fund trying to replace him as CEO.

While Dorsey managed to hold onto his role, the hedge fund was able to force Twitter to make multiple changes to its corporate structure. It was announced at the time that a board committee would be formed to ‘evaluate the CEO succession plan,’ according to The Verge.

Whoever replaces Dorsey will have incredibly tough targets to meet, after Twitter announced earlier this year it aims to double its annual revenue by 2023 and 315 million monetizable daily active users.

Jack Dorsey is expected to step down as the chief executive of Twitter, sources have told CNBC

Dorsey has long faced criticism about his ability to run both Twitter and Square, a digital payments company, arguing that he should not be juggling both firms as CEO.

In fact, when the news leaked of Dorsey’s imminent departure, Twitter’s share price soared by 11 percent, while those of Square Inc, were up 3 percent.

This won’t be the first time Dorsey has exited Twitter.

He was pushed out in 2008 amid claims he kept leaving work early to enjoy other pursuits like yoga and fashion design, and chose improvements to the site over revenue.

In March 2011, Dorsey was named executive chairman, and when new CEO Dick Costolo announced his resignation in June 2015, Dorsey returned. 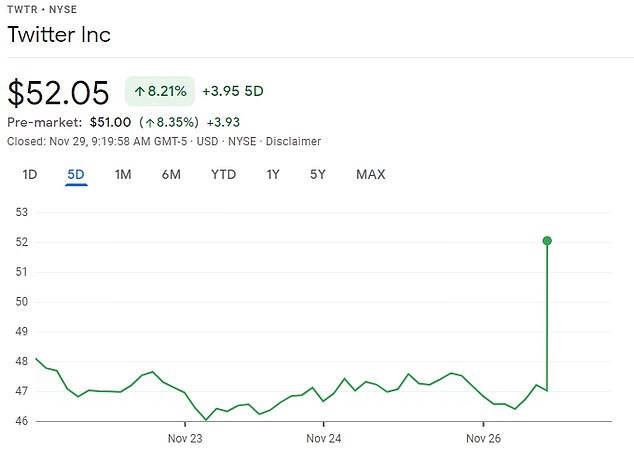 Following the news of his departure, Twitter stocks jumped 11 percent

The news comes after years of the social media mogul facing scrutiny for his apparent censorship of conservative voices, with some accusing him of bias.

In January, following the unrest at the Capitol, the company announced it had permanently suspended former President Donald Trump citing ‘the risk of further incitement of violence.’

He later defended the decision in a series of tweets, writing: ‘I do not celebrate or feel pride’ in the ban.

He added, ‘I believe this was the right decision for Twitter. We faced an extraordinary and untenable circumstance, forcing us to focus all of our actions on public safety.’

‘Offline harm as a result of online speech is demonstrably real, and what drives our policy and enforcement above all,’ he continued.

‘Having to take these actions fragment the public conversation. They divide us. They limit the potential for clarification, redemption, and learning. And sets a precedent I feel is dangerous: the power an individual or corporation has over a part of the global public conversation,’ Dorsey wrote. 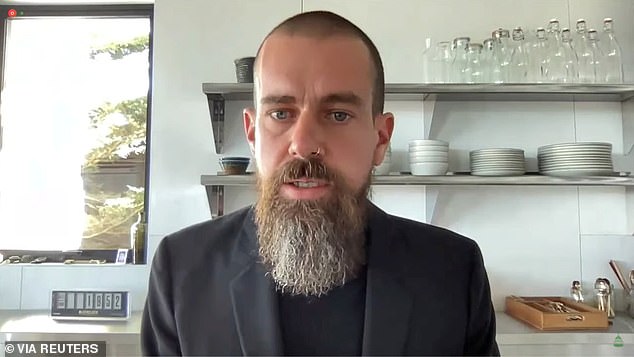 Dorsey has faced widespread criticism over the past few years, with conservatives accusing him of censorship after he banned former President Donald Trump 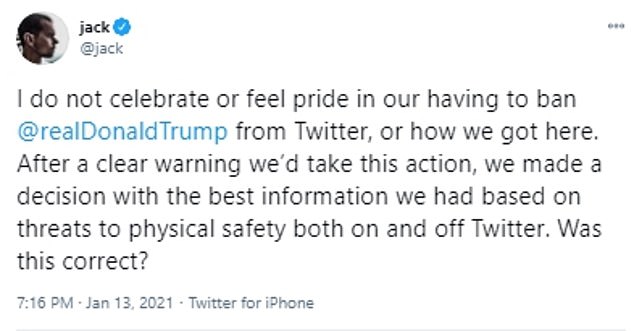 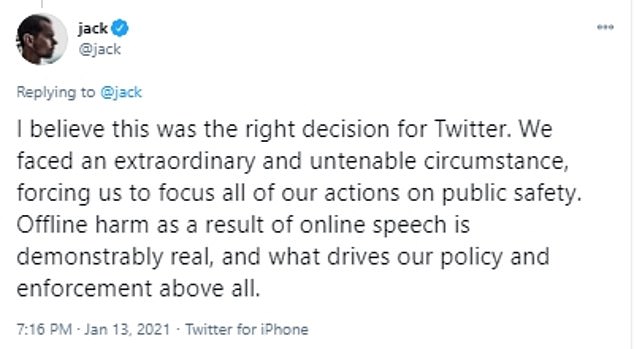 The company also faced criticism after Twitter stopped users from linking to stories alleging Joe Biden may be corrupt ahead of the 2020 election.

The row exploded after the New York Post reported that Mr Biden’s drug-addict son Hunter allegedly offered to introduce his Ukrainian business partners to his father, who was vice-president at the time, in exchange for cash.

The report was based on an email recovered from an abandoned laptop that had been turned over to Donald Trump’s Republican allies.

But despite appearing in a respected newspaper, the social-media giants blocked users from spreading the story, with Facebook saying it had to be fact-checked and Twitter saying it violated its rules on using hacked material.

The Twitter accounts of the newspaper, of the official Trump campaign and of White House press secretary Kayleigh McEnany were even temporarily banned from posting anything at all because of the furore. The Post also published a photograph, said to be found on the same computer, showing Hunter with a crack pipe in his mouth.

Is Oatly stock a buy or sell after crashing by 68% from ATH?

Is Oatly stock a buy or sell after crashing by 68% from ATH?