Jack Nowell believes Eddie Jones and the England coaches will understand his decision to sacrifice his body to be part of Exeter’s glorious double.

Nowell will miss this weekend’s Six Nations finale and the autumn internationals as he recovers from surgery on a toe injury that he thinks will keep him out for four months.

The wing ruptured ligaments in last month’s Champions Cup semi-final win over Toulouse but, after consulting medical advice, played through the pain to secure the Premiership and European trophies. 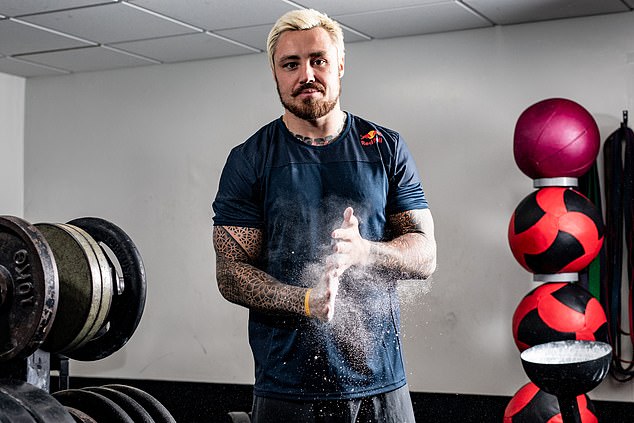 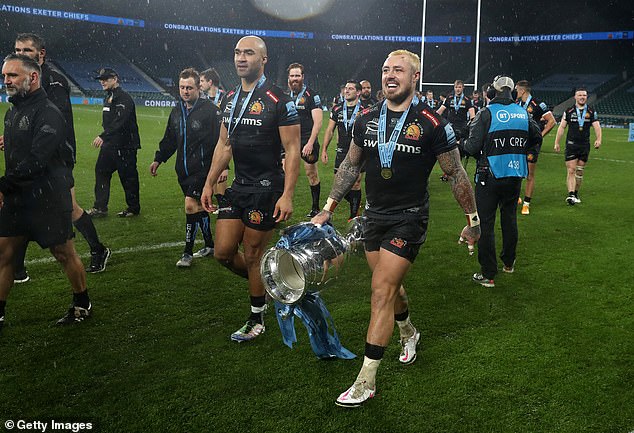 ‘So to dig in for two more weeks to play in the two biggest games in the club’s history is something I’m sure the England coaches are going to understand.’

He added: ‘I knew if it was a pain thing – and I couldn’t do myself any more damage – there was no way I was going to miss these two games. No way. So I was glad I got through it and I would never have forgiven myself if I sat back, didn’t try and ended up watching the team play and win two finals. To be part of that, it’s something I’m so glad I did.’

Nowell trained only once in those two weeks and had a special insole made for his boot to replicate the damaged tendons. But he was warned that also trying to survive England’s autumn schedule would exacerbate the problem. 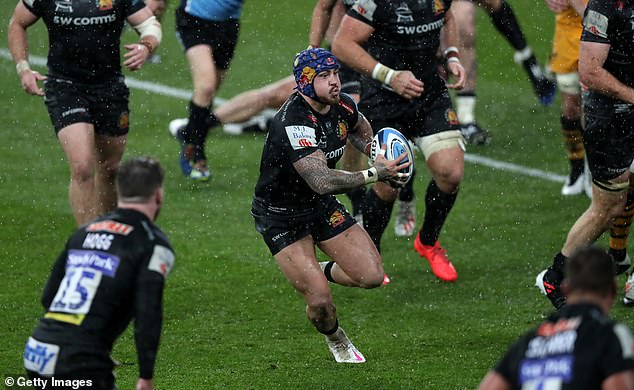 ‘The position my foot is in – it doesn’t look pretty at the moment – I’d probably never have been able to train and play at a high standard of what England needed. So there wasn’t really a decision to be made.’

Nowell went under the knife on Friday and is confident of returning in time for the 2021 Six Nations next spring. Over recent days, however, the 27-year-old has been recovering from a hangover following celebrations with his Exeter team-mates.

‘It was very, very tame compared to what we at the club are used to,’ he said.

‘Obviously the new boys who played this year had their sing-songs at the front… it’s pretty simple, it’s just about how much you can drink by the time you get home.’

Exeter were victorious at Twickenham with victory over Wasps, who were hit by a coronavirus outbreak in the build-up. Nowell believes Exeter’s ability to avoid such disruption is one of the reasons for their success.

‘There was a whole fit team which is very rare to have at the end of the season,’ he said.

‘That’s down to players looking after themselves – staying fit, healthy, especially in the time we’re in with Covid going round. We’re being tested twice a week and, like we’ve seen, that can let sides down. ‘But the team have really made a commitment to try and be good at this – to be fit, to not test positive… to have the whole team available for selection just shows where we are and how much it meant to all of us to do it.’

Big Joe – it’s in his name, isn’t it? There aren’t many wingers that are his weight, his speed, his strength – and can do what he can. Off the field, though, he’s very different – he’s very calm, very gentle and a bit of a joker around the squad. I roomed with him a fair bit at the World Cup – he enjoys his PlayStation time, he’s very similar to me. 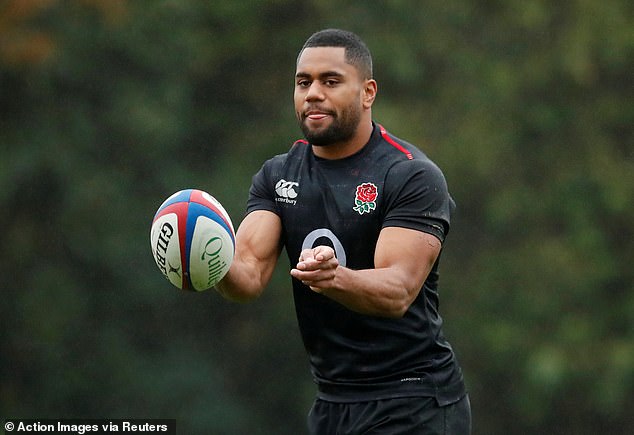 There aren’t many wingers that are Joe Cokanasiga weight, his speed, his strength

Extremely quick as everyone knows but he’s an ultra-professional as well. When he’s not on the field he’s probably in his room stretching, doing yoga or anything to make him better. I love Jonny, I’ve spent a good few years with him and he’s someone who’s always there if you need a chat… and he’ll always tell you what he thinks. 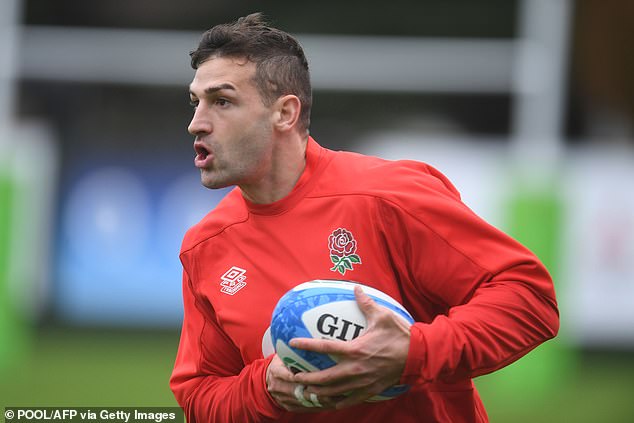 I’ve played with Tony since we were about 16, 17 so I’ve known him for a long, long time. On the pitch there is his footwork, his pace and he can play in any position across the backline. He’s at Bath and he’s very similar to Joe – he’s very chilled and someone I can always go and speak to if I need to. 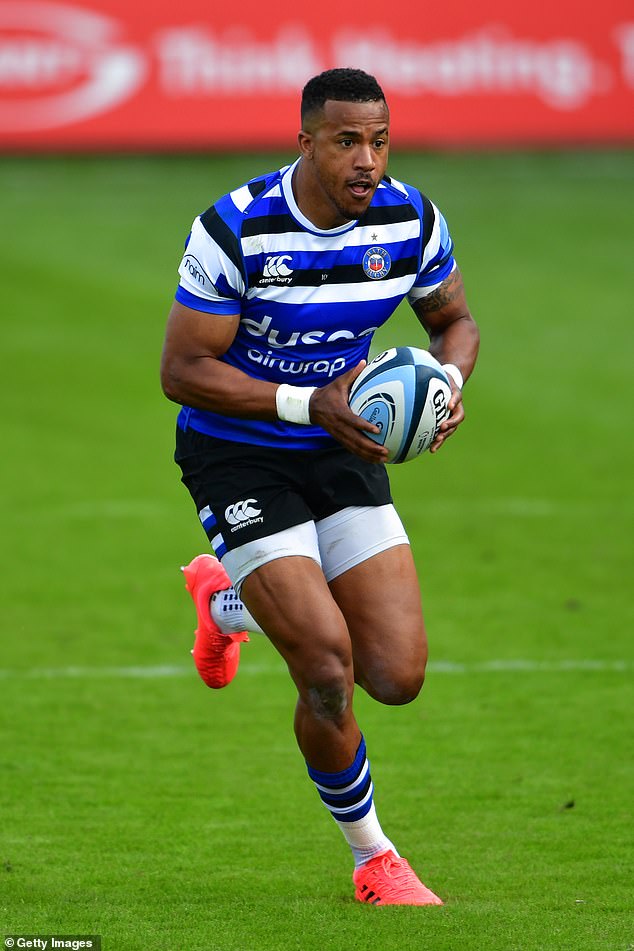 On the pitch there is his footwork, his pace and he can play in any position across the backline

An all-round player – his footwork, sidestep, pace, he’s obviously a very good ball handler as well. He kicks the ball well, makes his tackles and like all of them, is very dangerous. These boys are very similar – our social time tends to be all of us logging on to the PlayStation and playing against each other in our own rooms. Which sounds a bit sad but it’s actually something you need to do to recover and take your mind off stuff.

We’re the guys who always seem to be going out to the cinema, or for food, socialising together which is pretty cool. Even though we’re all in the same position, we all feel we can be there for each other. At the end of the day we all want the same goal – to win. You’re not always going to be involved but as long as you be a good bloke with each other, that’s what means the most. 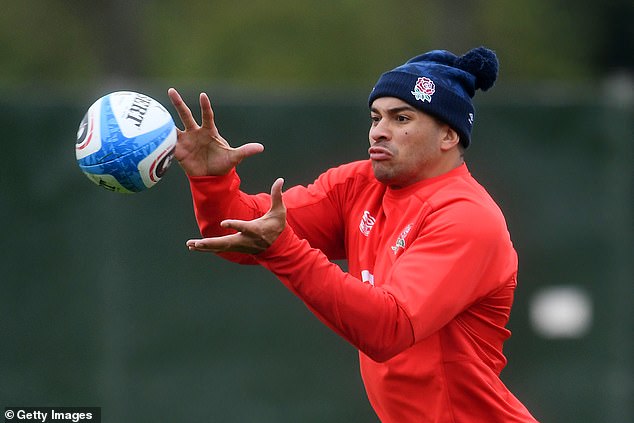