The former British colony of Jamaica was at the centre of the transatlantic slave trade, with Africans transported to the island and forced to work on banana and sugar cane plantations.

The island was discovered as part of an expedition led by Italian explorer Christopher Columbus in 1492 and brought under Spanish control. Other West Indies islands were then used as outposts by English pirates and privateers involved in raiding Spanish treasure fleets.

Some 200 years later, in 1655, Jamaica was seized by the British and would go on to become integral in Britain’s supply of sugar – a highly sought after commodity in the eighteen century.

The Caribbean countries of Jamaica, Antigua, St Kitts, Nevis and Barbados, which were under British control,  connected Britain to Western Africa and the Americas and formed a key part of the triangular slave trade between the countries and Britain.

They grew in population from a few thousand in the mid-17th Century to 18,000 in the 1680s – with slaves making up more than half of the total. 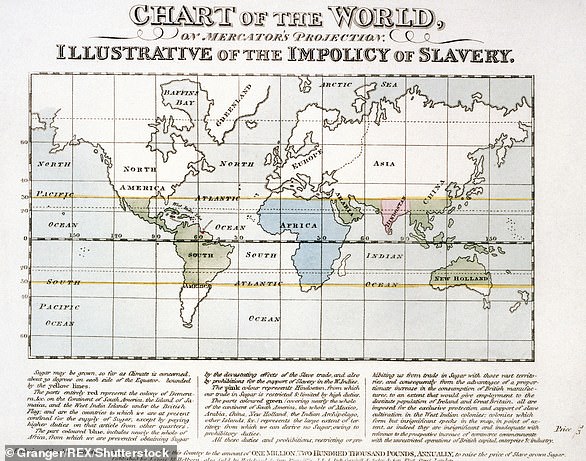 Jamaica was discovered as part of an expedition led by Italian explorer Christopher Columbus in 1492 and brought under Spanish control. Pictured,  a British map shows sugar producing areas and trade restrictions 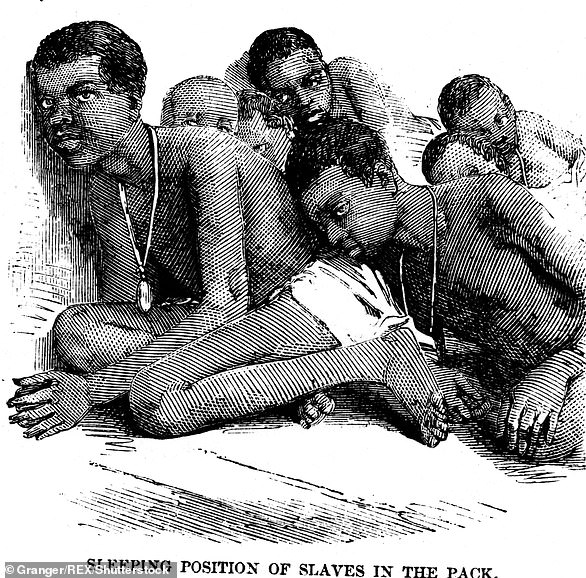 The transatlantic slave trade was a triangular route from Europe to Africa, to the Americas and back to Europe.

Firstly, merchants exported goods to Africa in return for enslaved Africans, gold, ivory and spices. The ships then headed across to the American colonies where the slaves were sold for sugar, tobacco, cotton and other produce.

Once in the colonies the slaves worked on plantations and inside the homes of Europeans as cleaners, cooks or other household domestics.

The products were then brought back to Europe, benefiting British citizens and producing profit for businesses based in Britain.

Slaves were victim to an oppressive regime that exploited labour to make profit for wealthy landowners. They were bought and sold as property and often lived under horrendous conditions.

In 1672 the Royal Africa Company was formed and held the monopoly on the British slave trade. Jamaica became one of the busiest markets and African slaves soon outnumbered Europeans five to one.

The gold it supplied to the Royal Mint was named the guinea, after the West African country from which the gold was taken. 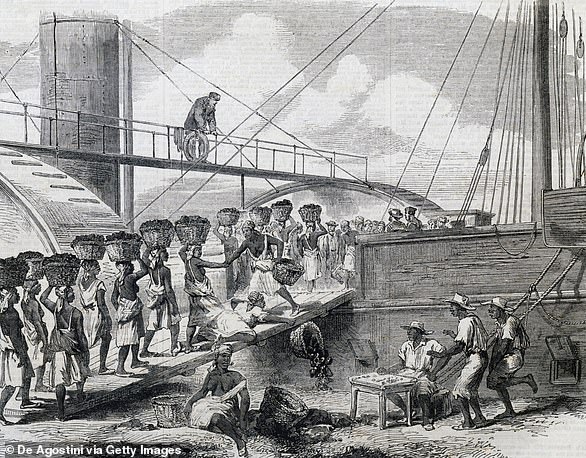 Slaves are pictured loading coal onto a ship in Morant Bay, Jamaica, in the 18th century 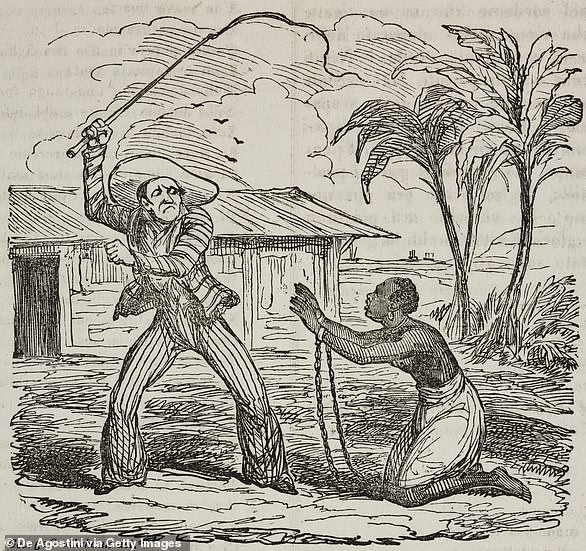 A slave is whipped by a settler in Jamaica in this illustration by George Cruikshank from Teatro universale, drawn in 1845

In 1689 Bristol and Liverpool merchants began to get more involved in the trade and Glasgow soon became the centre of the tobacco industry.

The British Army and Royal Navy owned and hired slaves as labourers and soldiers, most of whom went to the Corps of Military Labourers and the West India Regiments.

And the Crown benefited from the trade whenever estates were passed on in lieu of government taxes or following court cases. Greenwich Hospital, which was managed by a government department for a number of years, took over Golden Vale plantation in Portland Parish, Jamaica in 1793.

Dozens of processing centres were formed for sugar, indigo, and cacao – the source of cocoa beans. Jamaica’s slave population swelled to 300,000 despite civil unrest and unstable food supplies. Some 15,000 starved to death between 1780 and 1787.

Britain and Portugal were responsible for 70 per cent of Africans transported to the Americas, with Britain most dominant between 1640 and 1807.

Nigerian historian Joseph Inikori has previously suggested it was the slave trade which prompted and funded the Industrial Revolution in Britain.

Estimates suggest Britain was responsible for transporting 3.1million Africans – of which only 2.7million arrived – to the British colonies of the Caribbean, North and South America and other countries. 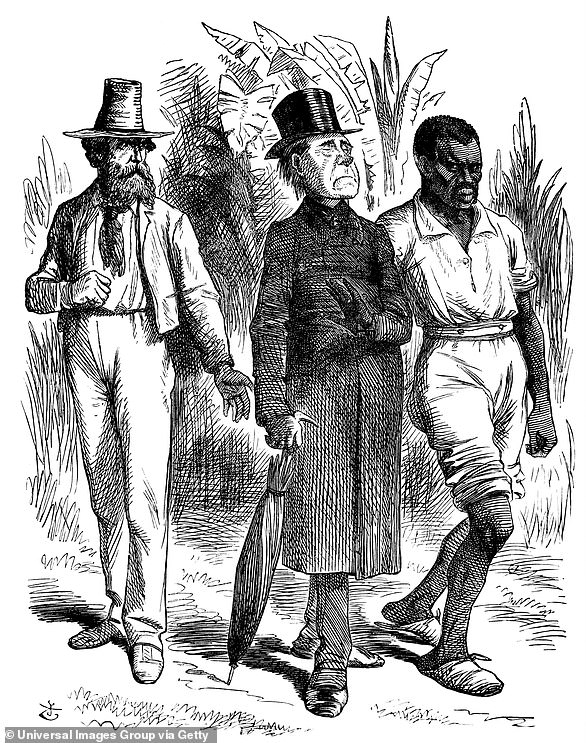 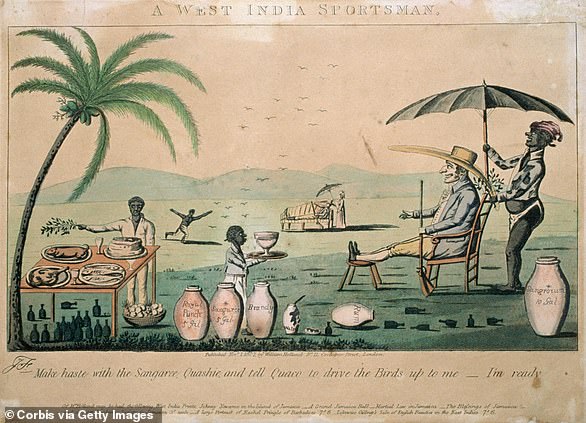 Profits went back into British industry, with banks and insurance companies benefiting by offering services to slave merchants.

The British ports involved in the slave trade experienced periods of rapid growth during the 18th century, when traders made £60 million – around £8 billion today – from slave sales.

In the 1740s the West India Interest saw British merchants join West Indian sugar planters to become the first sugar trading organisation to have a voice in Parliament.

An assembly of planters from Jamaica lobbied MPs in support of the slave trade in 1789.

British Parliament abolished the transatlantic slave trade in 1807, resulting in increased costs for planters in Jamaica.

It was declared ‘all manner of dealing and reading in the purchase, sale, barter, or transfer of slaves or of persons intending to be sold, transferred, used, or dealt with as slaves, practiced or carried in, at, or from any part of the coast or countries of Africa shall be abolished, prohibited and declared to be unlawful’.

Revolts were held between 1831 and 1832 as slavery continued, and these were put down by British troops.

Parliament went on to approve an emancipatory act that gave all enslaved people in British colonies their freedom by 1838. Many former slaves moved to nearby hills to live on small landholdings and planters were compensated £19 per slave.

What Is Bitcoin Trading And How Does It Work In The Virtual Platform? - Coinpedia - Fintech & Cryptocurreny News Media 2021

'Hot spots still a little too hot': More than half of Americans won't consider international travel as countries reopen

Matt Damon admitted that he used to make use of a homophobic slur every now and...