Batter up! Jamie Foxx loosens up before a celebrity softball game with a few sips of his Brown Sugar Bourbon

Jamie Foxx opted for a little liquid courage ahead of a celebrity softball game on Sunday.

The 53-year-old actor was seen taking a few swigs of his Brown Sugar Bourbon as he warmed up on the baseball diamond before showing off his athletic ability for charity.

Held at LA Valley College, Foxx was in the company of other celebrities and athletes including YouTuber Austin McBroom, comedian Chris Tucker and former NBA player Matt Barnes. 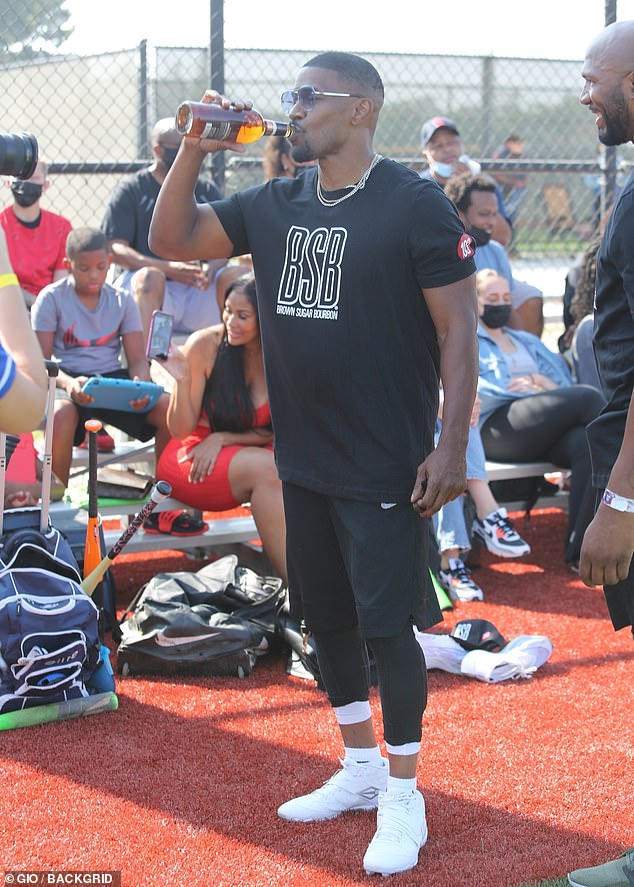 Pre-game routine: The actor, 53, was seen loosening up with a few sips of his line of Brown Sugar Bourbon ahead of taking the field to play in a celebrity softball game for charity

Foxx turned out for the 2nd Annual Team Watson Vs. Pump Bros event put on by Dana Pump of the Harold & Carole Pump Foundation — a non profit that raises funds to combat cancer by creating awareness and establishing treatment programs.

His muscles were on full display and he accessorized with a few chains and donned blue lensed aviators from his collection with eyewear brand Prive Revaux. 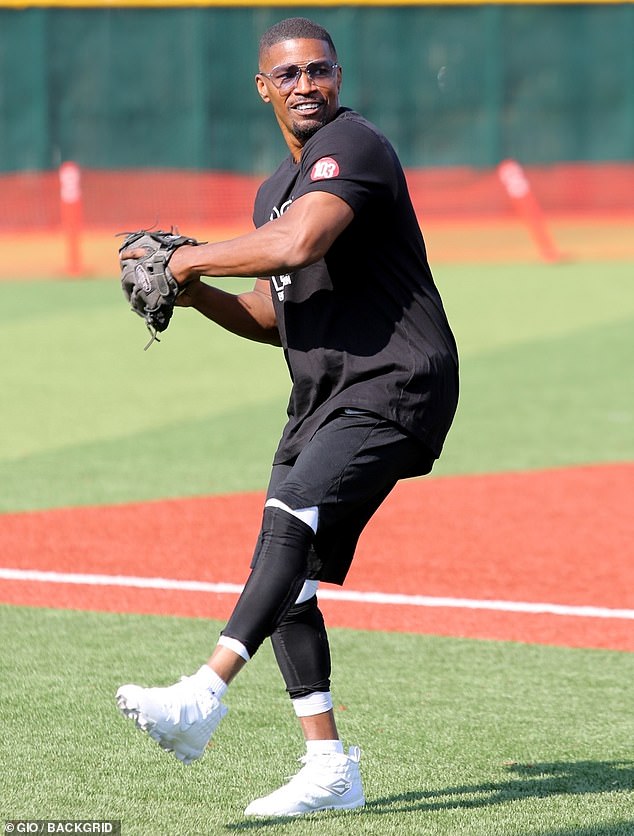 Outfield: The Django Unchained star was seen pitching a few balls throughout the course of the game 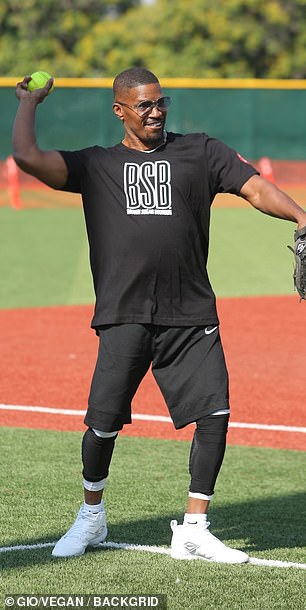 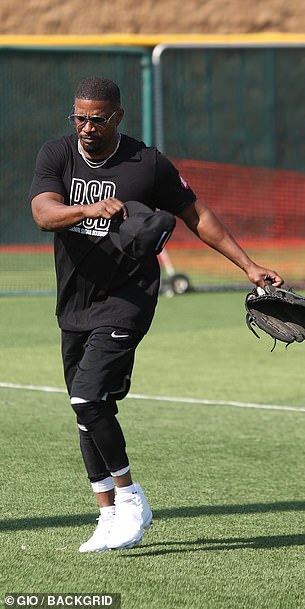 Having a ball: After a few good throws he looked to do a little victory dance 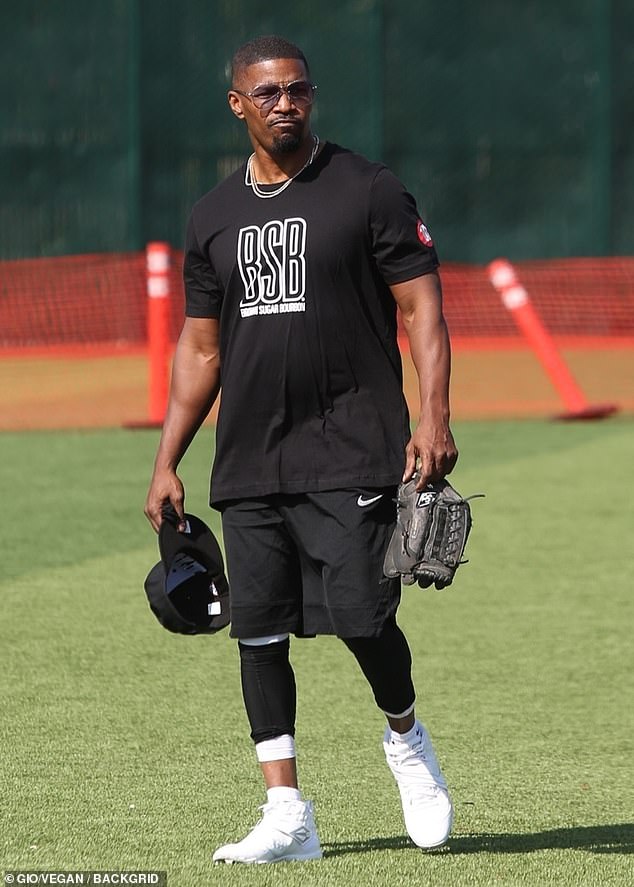 Buff! Jamie’s athletic build was on full display as he got his head in the game

His alcohol brand was just one of few sponsors for the event which also included Vuelo Tequila, Prive Revaux, Tremendo and the Lifedriven Foundation.

He was seen doing a bit of stretching before ultimately taking the field where he pitched and tried his hand at batting which drew cheers.

After a few good throws he looked to do a little victory dance as he hammed it up on the field while a bevy of supporters watched on. 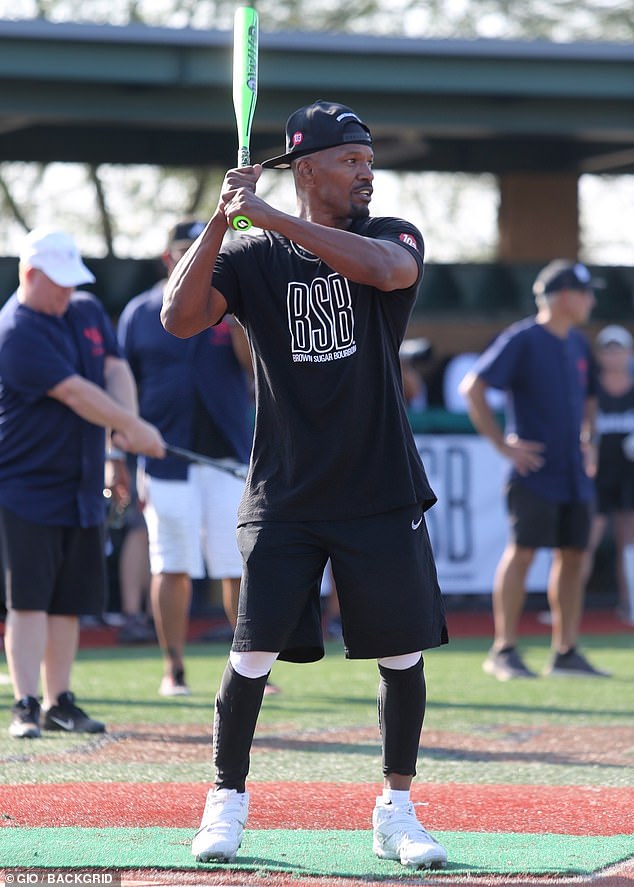 Batter up! Foxx was seen stepping up to bat as he rocked a backwards cap 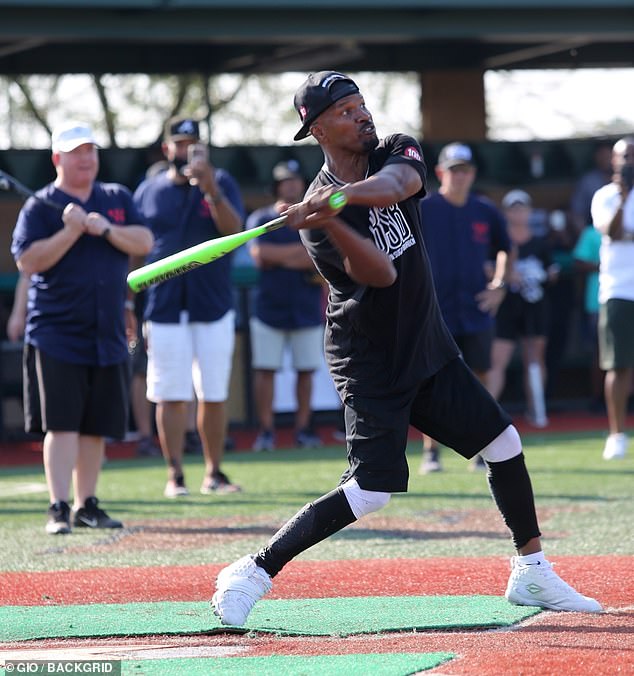 Home run? The intensity on his face was apparent as he swung a green softball bat while people watched on 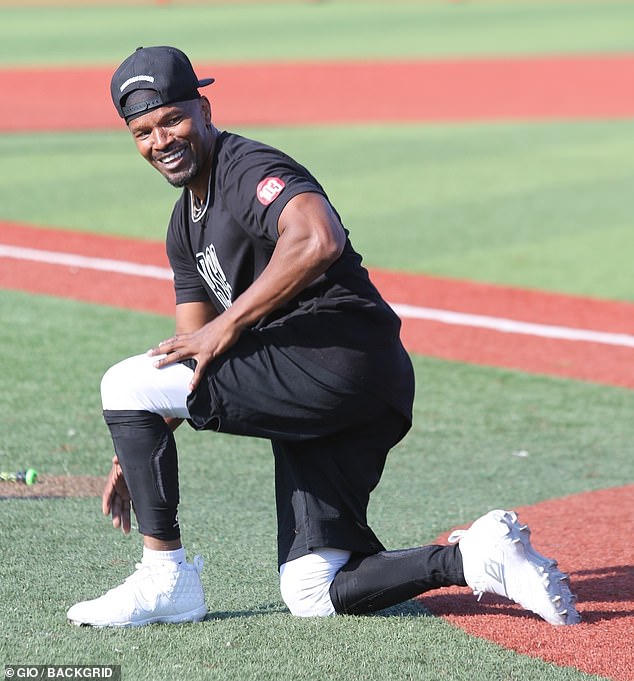 Worn out? After swinging he fell to his knees while flashing a smile

At one point he slipped a backwards cap on before he stepped up to bat and after the game he really worked the crowd as he ran around the field with a ‘BSB’ flag.

He became owner of the liquor brand in March but it was originally founded in 2016.

‘I’ve always lived by the rule that life is short, and you need to go out and do what you want to do. Owning a brand that brings sweet life to the party has always been a goal and with BSB we’re making it happen,’ he said in a statement.

Ahead of his arrival he was seen signing autographs to cars full of fans that turned up to witness his athletic ability. 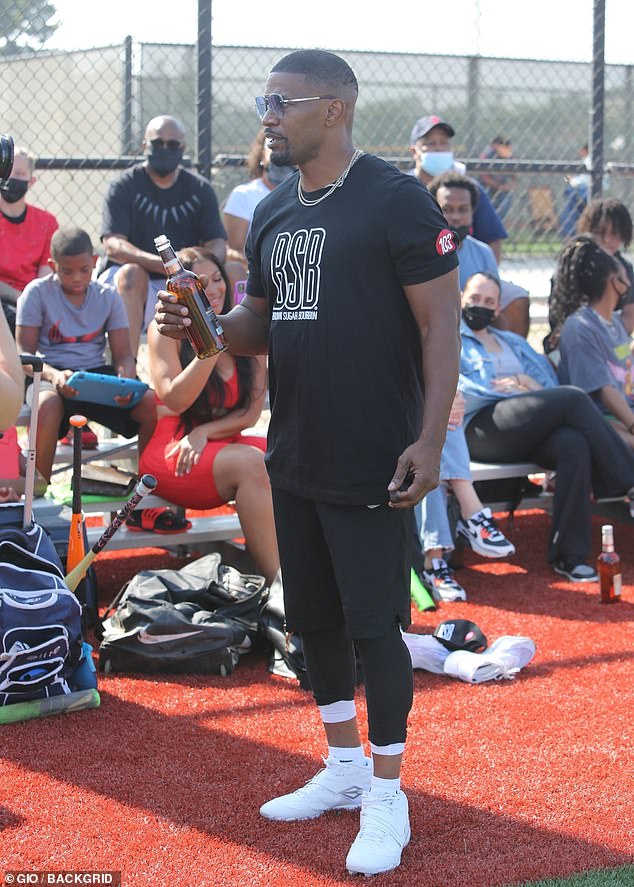 His brand: Foxx became owner of BSB in March making him involved both creatively and financially 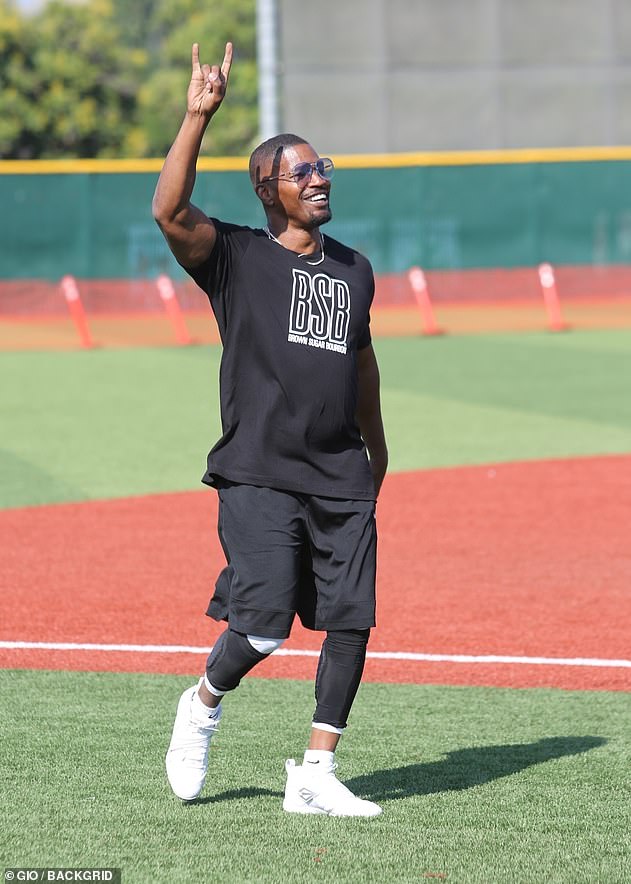 Building momentum: At one point he was seen addressing the crowd with a smile while throwing up horns at the athletic event

The once boyfriend of Katie Holmes has been on the dating scene since calling it quits with the Dawson’s Creek actress in the summer of 2019.

They kept their six year romance very under wraps and when he was first questioned about their relationship in 2013 he told ET that it was ‘not true.’

‘[The rumors] are one hundred percent not true. In fact, it’s quite hilarious because we simply danced at a charity event along with a lot of other people.’

At this time he is not publicly linked to anyone. 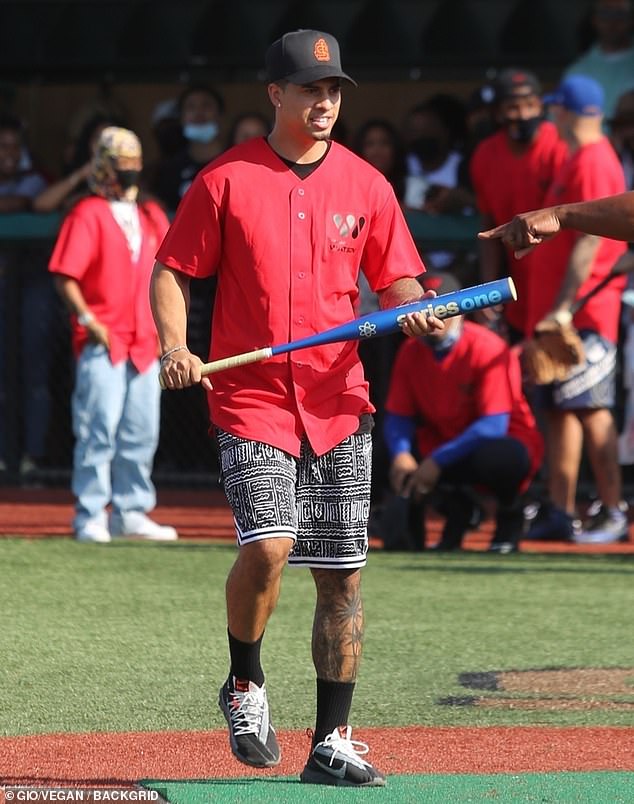 Also present: McBroom was one of a handful of celebrities at the game including Chris Tucker, and NBA player Matt Barnes 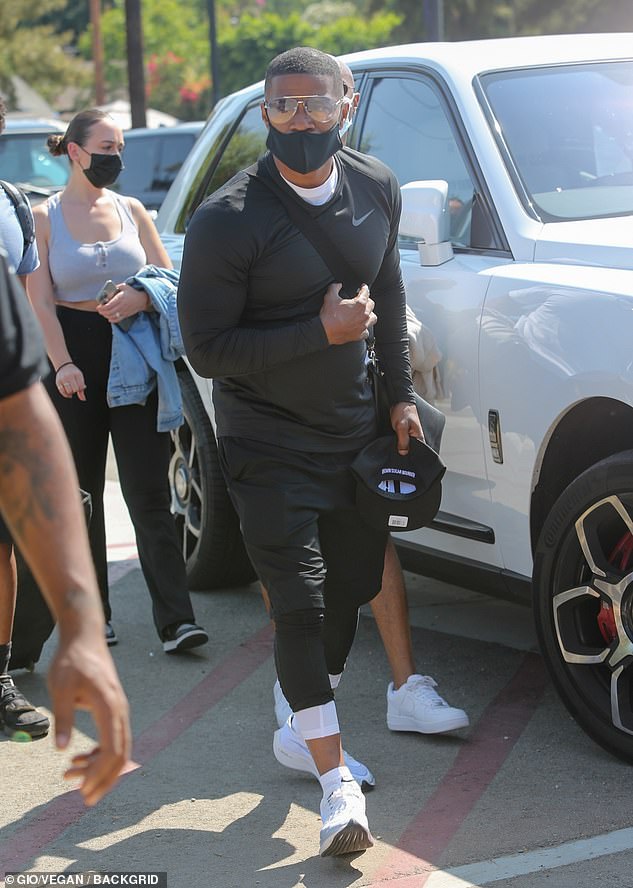 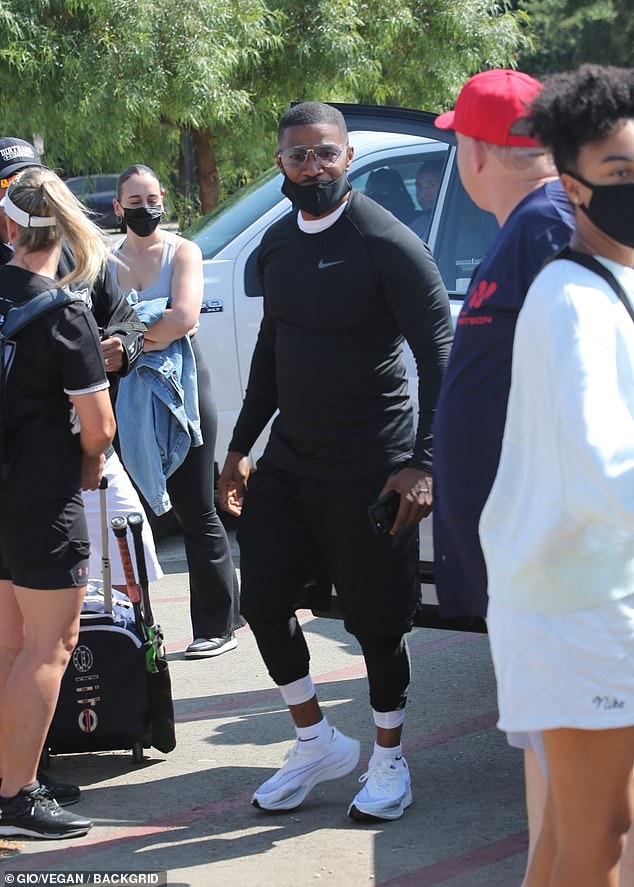 Mask up: The Law Abiding Citizen star masked up while arriving at the game amid the increasing COVID-19 cases in Los Angeles 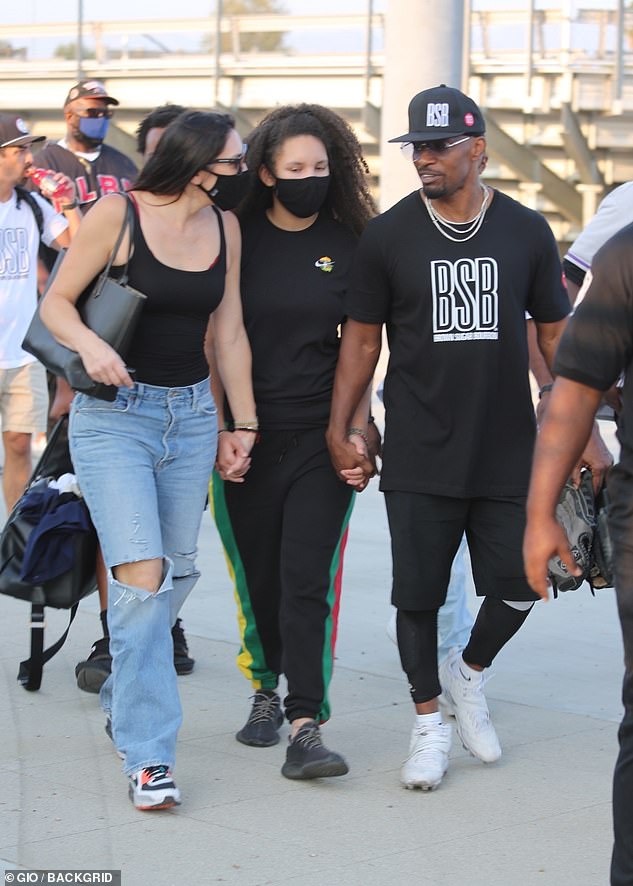 Hand in hand: Jamie Foxx arrives with his ex, Kristin Grannis and daughter Annalise at the game 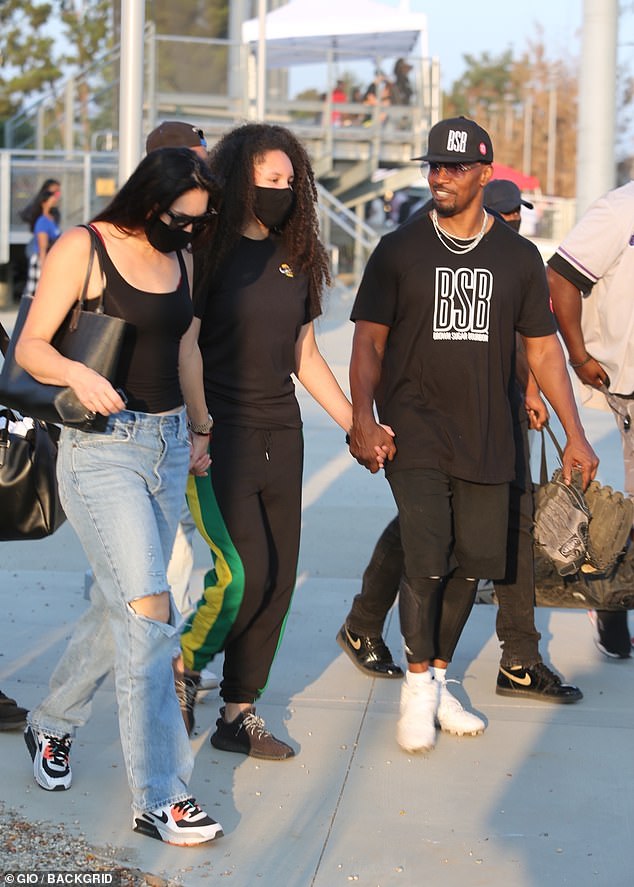 All smiles: Foxx was all smiles while carrying his baseball gloves to the event 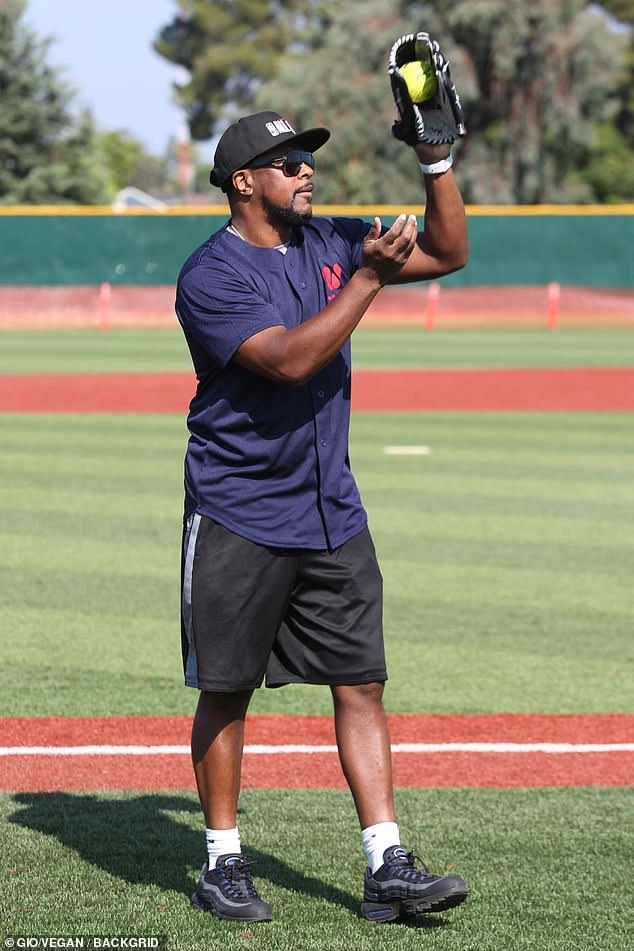 Play ball!: Chris Tucker warms up before a celebrity baseball game in Hollywood 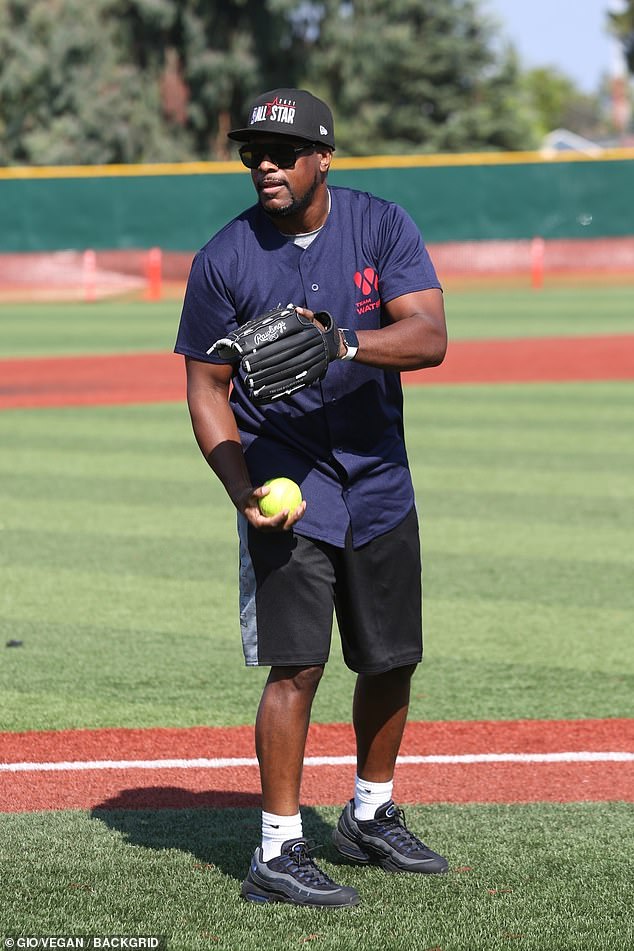 Ready: Chris Tucker gets ready for a celebrity baseball game in Hollywood

Hawks 110-99 Celtics | NBA: Juancho Hernangmez returns to the rotation of some irregular Celtics that do not take flight

Hawks 110-99 Celtics | NBA: Juancho Hernangmez returns to the rotation of some irregular Celtics that do not take flight