Jamie Lynn Spears’ publisher is stepping in to correct what it says are ‘inaccurate and incomplete’ details about the actress’ upcoming memoir.

Spears’ fans were surprised to discover a listing on Worthy Publishing’s website indicating that her new book would be titled I Must Confess: Family, Fame, and Figuring It Out, Just Jared shared earlier on Friday.

But now a spokesperson for Worthy Publishing claims the title was merely a ‘placeholder’ that was accidentally published on the site, according to People. 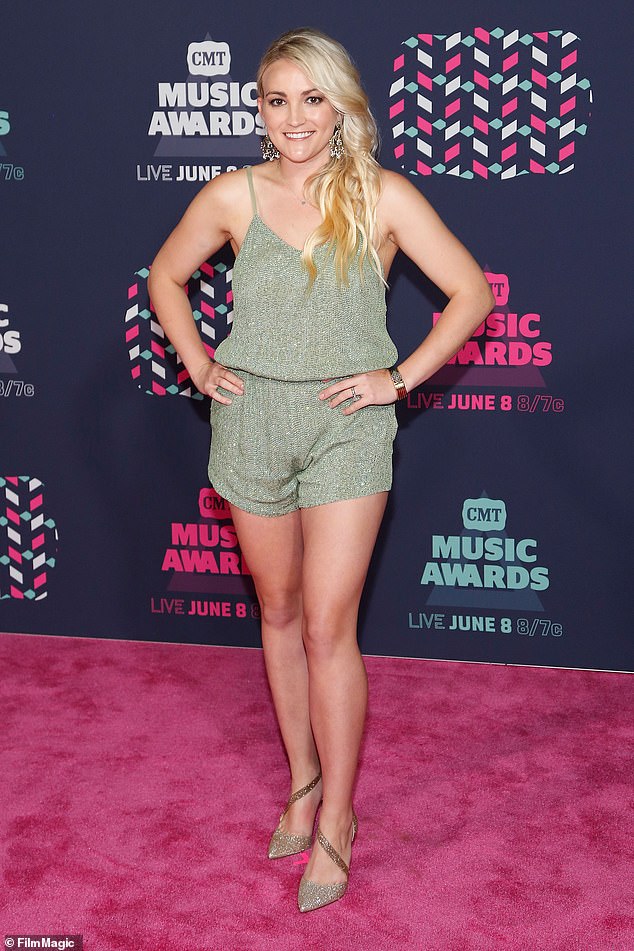 Reversal: Jamie Lynn Spears’ publisher retracted a listing that said her memoir was titled I Must Confess and claimed the information was ‘inaccurate and incomplete,’ People reported on Friday; seen in 2016 in Nashville

‘We deeply regret that incorrect and incomplete information about her book has appeared in the public space, particularly at this sensitive time for Jamie Lynn and her family,’ it continued.

Worthy Publishing added that the ‘as-yet-untitled’ memoir is scheduled for a January 2022 release.

‘Jamie Lynn’s book has been in development over the past 12 months and will allow the world to hear her inspiring story in her own words, for the first time,’ the publisher continued. ‘We look forward to sharing accurate and complete details about the project at the appropriate time and to celebrating the release of her memoir with Jamie Lynn and her fans next year.’ 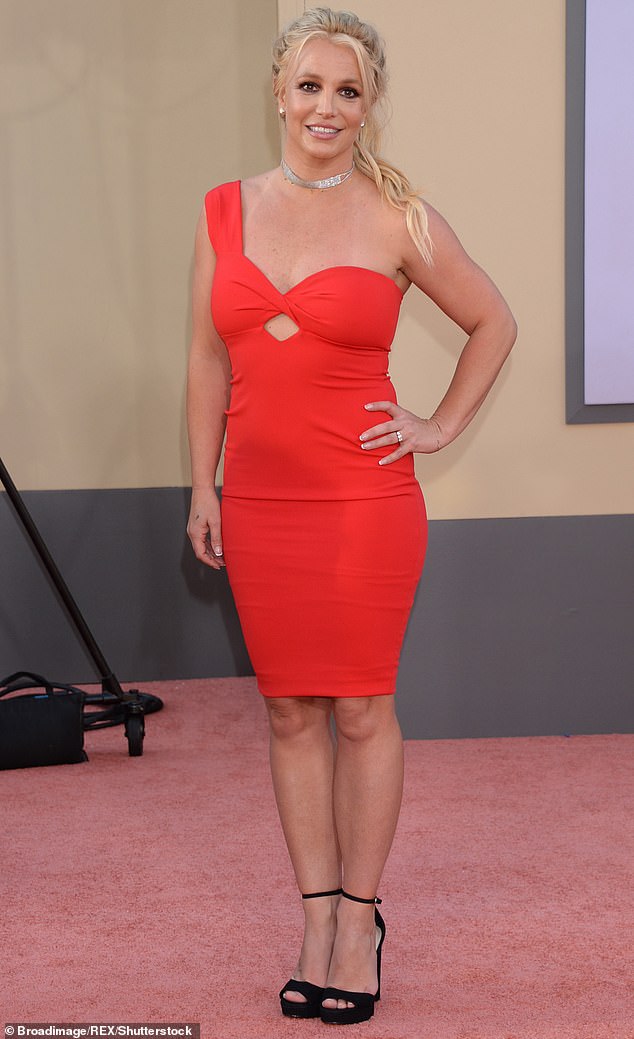 Mistakenly posted: A spokesperson for Worthy said the title was a ‘placeholder’ that had erroneously been posted on its website and on bookseller sites. The title was taken from Britney Spears’ song …Baby One More Time; Britney seen in 2019 in Hollywood

The initial news that Jamie Lynn, 30, was naming her memoir, a book about her own life, with lyrics from one of her sister’s most iconic songs irked some fans.

The book had previously been titled Southern Roots prior to the most recent title, according to Page Six.

The publisher’s description said that the former Nickelodeon star ‘shares never-before-heard stories that are at times funny, inspiring, messy and uncomfortable. Like having her mom’s credit card declined at Limited Too when her sister was on the radio. How it feels to have inspired 16 And Pregnant with her own life story. Why her daughter’s ATV accident caused her to reevaluate and redirect her life. And why her family is just like any other family.’

But a spokesperson for the publisher, which specializes in Christian-themed books, said the titled was a temporary one that should have never been public released.

‘This was a placeholder title for internal use only,’ they told People.

Not happy: The listing has already been hit with more than a dozen 1-star reviews with users calling the actress ‘desperate’ and ‘pathetic’ and accusing the mother-of-two of using her sister’s fame 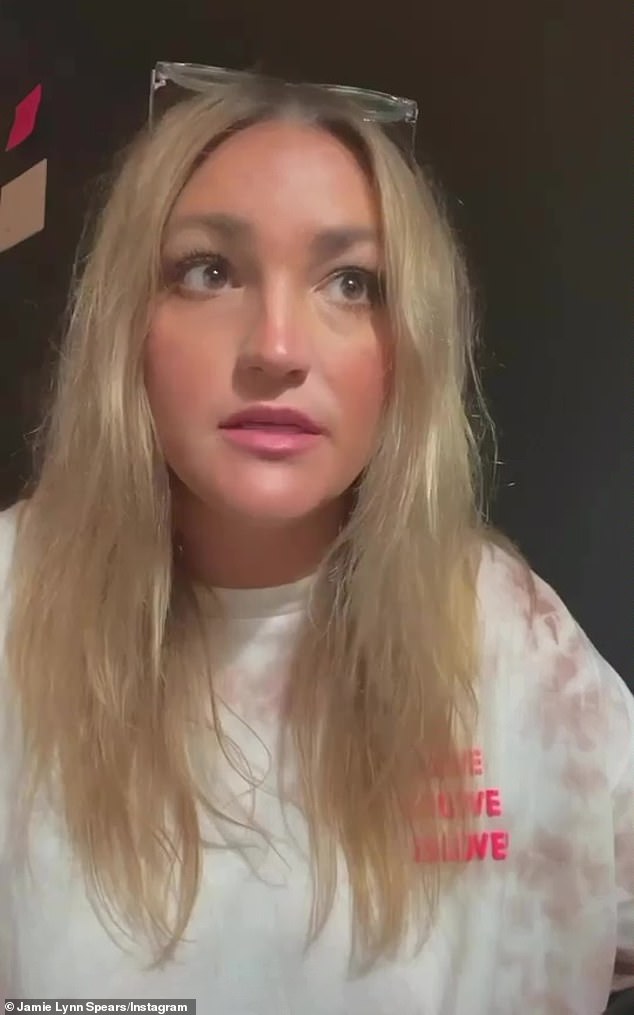 Having her say: It comes after Jamie Lynn, 30 spoke out against online trolls after allegedly receiving death threats following Britney’s bombshell court testimony, as the singer attempts to be released from the conservatorship she’s been under for 13 years

The listing on bookseller Barnes & Noble’s website had already been hit with more than a dozen 1-star reviews shortly after the title was unveiled, with users calling the actress ‘desperate’ and ‘pathetic’ and accusing the mother-of-two of using her sister’s fame and song lyric to sell her book.

It comes after Jamie Lynn shot back at fans of her sister after it was reported that she hasn’t been receiving a paycheck from the pop icon.

On Tuesday, the actress shared a Dailymail.com headline to her Instagram stories revealing that she’s the one of Britney’s family that is not on the singer’s payroll. 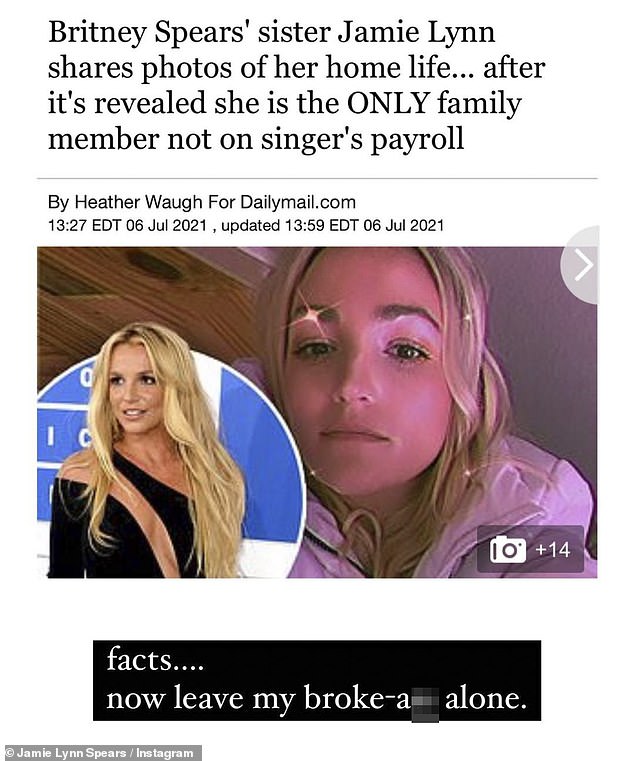 ‘Facts’: On Tuesday Jamie Lynn, 30, shared a DailyMail.com story about her being the only family member not on her sister’s payroll, and urged social media users to ‘leave my broke-a** alone’

Jamie Lynn has previously been open about the harassment she has been receiving amid reports of her sister’s efforts to end her longtime conservatorship.

Earlier this month, she wrote on Instagram about the threats social media users had been leveling at her family.

‘Hi, I respect that everyone has the right to express themselves, but can we please stop with the death threats, especially the death threats to children. – JLS,’ she said in a text post on her Insta Stories.

The former Nickelodeon star has been receiving backlash from Britney’s fans for staying silent in the wake of her shocking testimony about the freedom’s she has allegedly been deprived of due to her conservatorship. 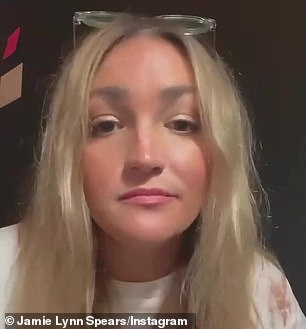 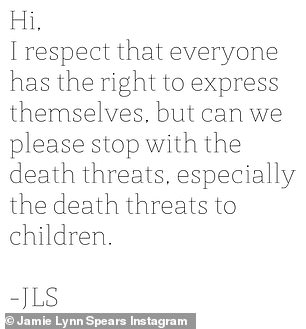 Scary: Earlier this month, Jamie Lynn wrote on Instagram about the threats social media users had been leveling at her family, including ‘death threats to children’

Last month, The New York Times revealed that Britney and Jamie Lynn’s father Jamie Spears earns $16,000 a month for being the co-conservator of his daughter’s finances, plus an $2,000 per month for office space rent.

Britney’s mother Lynne, 66, and brother Bryan, 44, also also on the payroll, though it hasn’t been reported how much they make off of the Toxic singer’s estate.

Jamie Lynn is the only member of Britney’s immediate family who doesn’t appear to be profiting from the conservatorship.

The financial benefits to her family have reportedly created tension between the pop star and her family in recent years.

‘Jamie, Lynne, and Spears’s brother, Bryan, have all spent years on Spears’s payroll, and, as friends who spoke with her at the time recalled, she was increasingly resentful of their efforts to influence her,’ The New Yorker reported on Saturday.

Even if she’s not directly profiting off her sister’s conservatorship, Jamie Lynn is still entangled in her financial affairs. 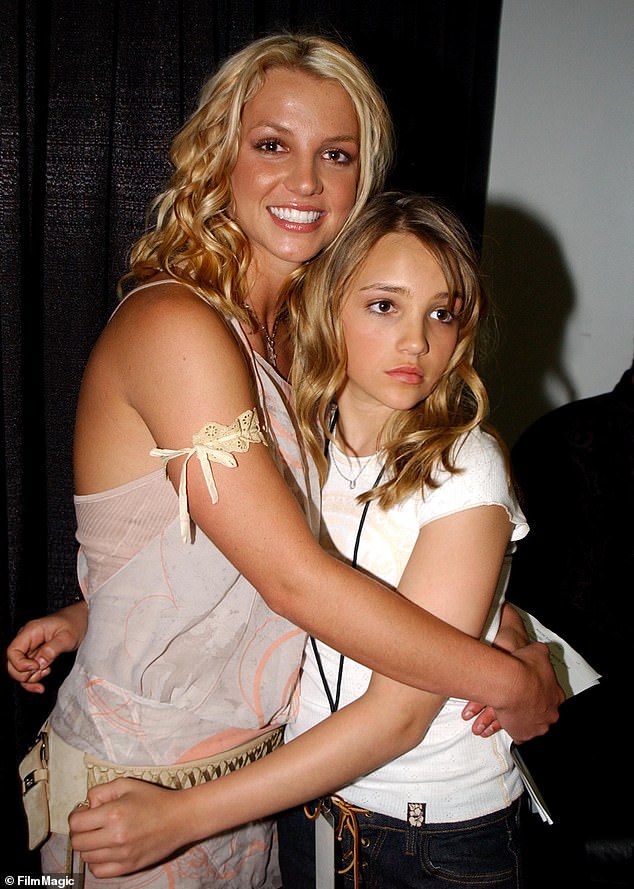 No financial interest: Jamie Lynn is still the trustee of Britney’s multi-million trust, which will be paid out to her children after Britney’s death; seen together in 2003

Back in August, it was revealed that Jamie Lynn had been appointed the trustee of Britney’s multi-million dollar trust in 2018.

According to The Blast, Britney created the trust in 2004 ‘to protect her vast fortune and provide for her children’s financial future.’

The Stronger hitmaker will be the sole beneficiary of the trust while alive, but upon her death Jamie will take charge of distributing the funds to her children Sean, 15, and Jayden, 14.

In court documents from August 2020, Jamie Lynn requested all assets from the trust be moved into ‘one or more accounts with Fidelity Brokerage Services with her as the custodian,’ the Los Angeles Times reported. 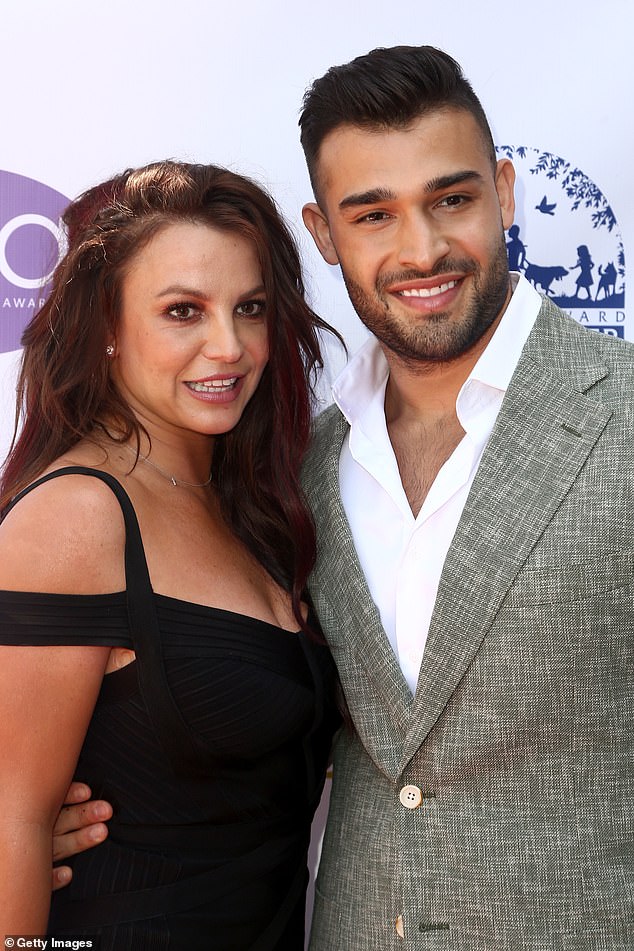 Restricted: Britney has complained about not being able to get an IUD removed to start a family with her boyfriend Sam Asghari; seen in 2919

The controversy over Britney’s conservatorship heated up after the Toxic hitmaker blasted her treatment in a passionate statement to the judge overseeing her case.

Among the most shocking details was her claim that she has an IUD implanted that she hasn’t been allowed to have removed.

After saying she wanted ‘to be able to get married and have a baby,’ she claimed that ‘this so-called team won’t let me go to the doctor to take it out because they don’t want me to have children, any more children.’

Britney reportedly doesn’t trust her doctors enough to allow them to evaluate her to determine if the conservatorship can be ended.

‘She doesn’t have much trust for the doctors that she has worked with so far,’ a source close to the situation told People. ‘She feels like they have failed her.’