Waitrose are to rename their Kaffir Lime Leaves after receiving complaints over the word ‘kaffir’ and its links to an offensive racial slur.

It had to happen. I have been looking askance at this product for a long, long time, absolutely seething. £1.80 for a dozen or so tiny leaves?

My local Asian grocery sells whole bunches for a couple of quid, and they’re freshly frozen — as Waitrose themselves would say — not dried.

But no, instead we must focus on the fact that the dried leaves, popular in south-east Asian cuisine, will now be called makrut instead.

Waitrose — my beloved Waitrose! — claims they are only responding to concerns from ‘some customers’. I take that to mean someone called Binky who has a PhD in North Korean Studies, a Rebel Princess tattoo on her ankle and a dog on a string, even though her parents own most of Hampshire. Plus her friend Opal, affectionately known as Fruity in the Magdalen Middle Common Room. I digress. 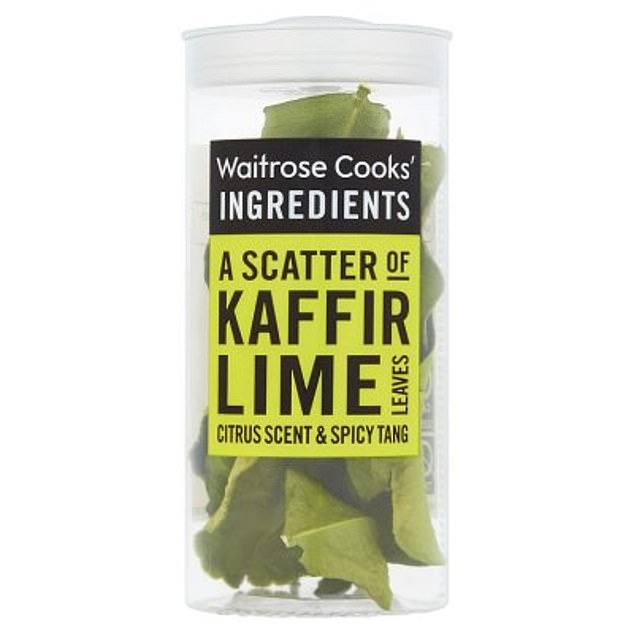 The product in question is actually sold as ‘A Scatter of Lime Leaves’, from Waitrose’s incredibly annoying Cooks’ Ingredients Range. So prescriptive and expensive! It includes ‘A Scatter of Pine Nuts’ which you’re invited to ‘toss in a salad’. Really? I was thinking of re-roofing the shed with them. Plus the cost! £4.45 per 100g, as opposed to the usual £3.60 per 100g. Nutty!

Waitrose grocery manager Helena Dennis said: ‘While some customers may be unaware of the connotations of this word, it’s important to us that we avoid offending anyone who shops with us.’

But Helena, once you start down that path of potential offence, where do you stop? Is sage wise? Does hair really need conditioning? Are there any senior media figures in the UK who might feel triggered by the continued sale of Brillo Pads, even if they do have similar exemplary qualities, including being able to cut through grease with ease?

If you start on the wokery grocery, Helena, there is simply no end to it all. Customers will be taking the knee in aisle three, finding offence in Camp Coffee Essence.

Before you know it shoppers will be objecting to curly parsley, black eyed peas, coarse salt, French sticks and fancies. Do Innocent Smoothies imply that other smoothies have guilt? And it cannot have escaped anyone’s attention that some potatoes are marketed as ‘loose’, tuber-shamed with this implication of low morality.

Other potatoes are ‘sweet’, some ‘all-rounders’ and some get mashed. Who are we to judge? It’s the same with virgin olive oil and extra virgin oil. As it doesn’t say in the Bible, ye who cast the first stone shall thrice deny the loaves and fishes in the chiller cabinets, ye verily. 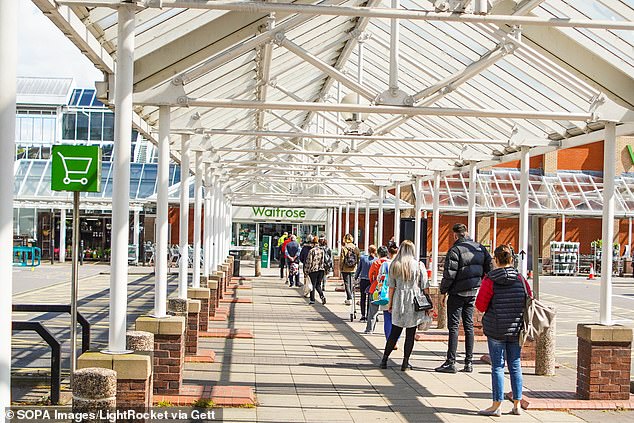 If you start on the wokery grocery, Helena, there is simply no end to it all. Customers will be taking the knee in aisle three, finding offence in Camp Coffee Essence (file image)

What is Waitrose going to do about kiwi fruit, lime-ys and uglifruit? Plain flour! How dare manufacturers suggest that other flours are more attractive — please stop funding hate, Helena.

There is a popular brand of sausages called — clutches pearls — Porky Whites. This company also sell their own brand of Surrey Sausages with no thought to the mental health of those in Guildford and Dorking who might feel offended at being filled into a natural casing and in need of preservatives.

Speaking of mental health issues, why has that orange been sectioned? There are buns in this store who are still hot and cross despite extensive counselling. Scotch bonnet peppers? How do you think we Scots feel about the appropriation of an item of our national dress for a chilli described as tough-skinned and wrinkled, stout and fiery? That may be true of brides in Inverness, but what about the rest of us?

There is also the issue of consent for shoppers to consider. Yes, you might feel like Chicken Tonight, but what if those feelings are not reciprocated by the chick in your life? Reach for your Squeezy Honey, but he might not be in the mood.

Hobnobs suggest a level of intimacy many might not feel comfortable with while, lookout chaps, here comes Minky Loveheart Scourer. Don’t much like the sound of her.

Elsewhere Double Concentrate Tomato Paste suggests that there are second rate tomato pastes out there with a lesser focus.

Wotsits? A slur on those with age-related short term memory loss.

And Home Ripening Plums could certainly do with a rethink, while Oreo cookies have long been infamous as an insult for black Americans disparagingly considered ‘white on the inside’.

Why are they not being removed or rebranded if it is ‘important to avoid offending anyone who shops with us’?

If this truly is the way forward, if a word used for a niche ingredient, considered racist in some parts of the world but not others, must now be banished, then the shelves will have to be cleared of anything that suggests unearned white privilege or class superiority, particularly in relation to the British monarchy.

So it is bye-bye king prawns, Imperial Leather, queen olives and royal icing. I have it on very good authority that the Duke of Sussex views Princes Tinned Rhubarb as a personal insult, as some interpret it as an accurate precis of his recent speeches on being a raindrop etc.

Helena, can you see where this is all going? It started with a tiny desiccated leaf. It ended up with Mr Muscle versus Twiglets, thick sliced versus bagel slims, Simple Soap versus Smarties, strong cheese versus mild dolcelatte.

Am I talking tinned rhubarb? Maybe, but I now know where to locate the in-store doughnuts, thanks all the same.

How admirable of Pete Doherty to offer himself as a life model to prisoners at HMP Barlinnie in Glasgow.

The former lead singer of the Libertines will pose for those offenders using art as part of their ‘recovery’.

Pretty big of him, considering he spent time behind bars for drug offences himself. Anyway, I’m all for it.

Anything that helps men and women come out of prison better people than they went in is to be applauded.

Do Farrow & Ball sell oil paints? Because if ever there was a time for Pete-friendly colours such as Dead Mouse, Rocker Corpse, Rising Gorge and Fresh Weal, that moment has arrived.

Grab those PJs, girls, and don’t listen to him

How chic! Just the thing to wear when sipping a cocktail and swapping bons mots with Cary Grant (God rest his divine soul) or George Clooney.

This week a friend bought them to wear at her husband’s 50th birthday party. They cost £260 but, come on, nobody has been anywhere or seen anyone for a year. Time to splurge! 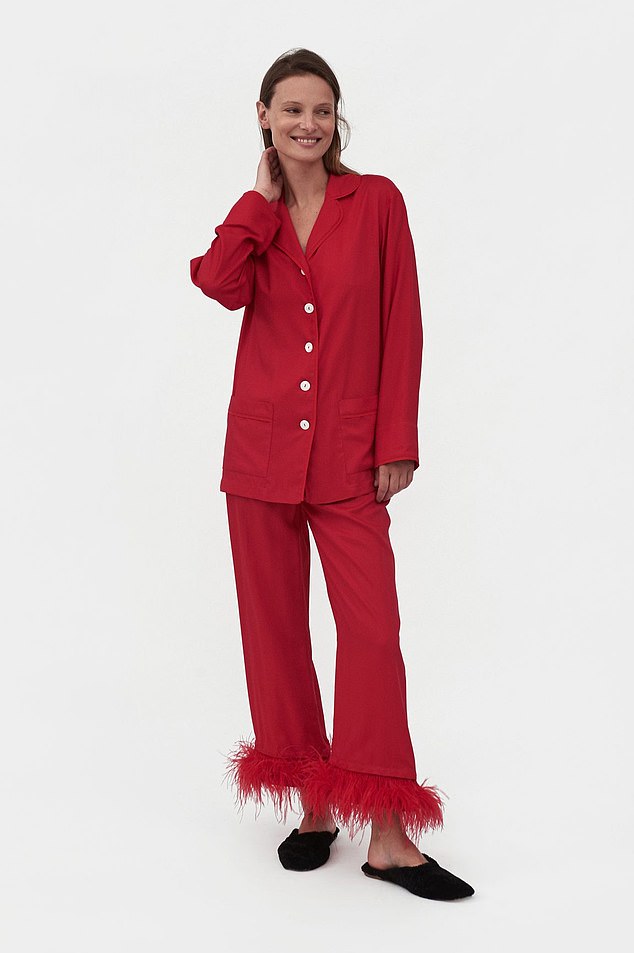 She thought he would love them too but, of course, she was wrong. ‘What are you wearing?’ he squeaked before their (Covid-approved) guests arrived. ‘You look like Big Bird.’

What is wrong with them? The concept of marabou, the need for more than one handbag, household cushions (ditto) and the sheer elegance of palazzo pants?

All this is completely beyond them.

Obviously I am not going to name my friend but, Charlotte, you know it’s you and you looked lovely.

No drinkies for 35 years!

The World Health Organisation has suggested that women of childbearing age should not drink. At all.

Good grief. We are on the fast track back to Gilead, regarded by the WHO as nothing more than a walking uterus, a putative baby-making machine. What a depressing, reductive step to even suggest.

Not to mention one that is unscientific and absurd, disproportionate to the risks involved — and none of their goddam business anyway. Of course caution is needed when it comes to drinking when pregnant, but surely we live in an age when women can make up their own minds about their own bodies and what is right for them?

Plus, who would police such a draconian diktat anyway? Hate to be the luckless WHO officials tasked with prising the chilled beakers of rosé or gin and tonics out of deserving female hands at 8pm on a Friday night. And having to beat a terrified retreat about five minutes later.

All power to you, PC Penny

How impressive is Penny Lancaster? Rod Stewart’s wife could just sit at home and marinate in all the luxury that being married to a multi-millionaire rock star entails.

Instead, she has trained as a special policewoman and is now on the beat in London, dealing with the unsociable crimes and misdemeanours that can make our cities so unpleasant.

How impressive is Penny Lancaster? Rod Stewart’s wife could just sit at home and marinate in all the luxury that being married to a multi-millionaire rock star entails

Constable Stewart deals with the grimmer side of life on a daily basis.

This week she collared a man who urinated in public, making him buy a bottle of water to clean up his shame.

Bless you, Penny — and everyone else who puts on a uniform and deals with the daily grot on our behalf.