An 85-year-old Japanese prince is planning to adopt a son to save the nation’s imperial family from extinction.

Under the current Imperial Household Law, only a male child descended from a male emperor can ascend the throne, but there are only four eligible males left in the Naruhito bloodline, all but one of whom are aged over 55.

Facing the potential extinction of Emperor Naruhito’s dynasty with no guarantee that 15-year-old Prince Hisahito will go on to bear a son, the Japanese government is therefore considering a change to the Imperial Household Law which would allow Prince Hitachi, 85, to adopt an heir.

But the imperial family and Japanese government has faced criticism as opinion polls have registered firm public support for a law change which would simply allow a female heiress to reign as a female emperor. 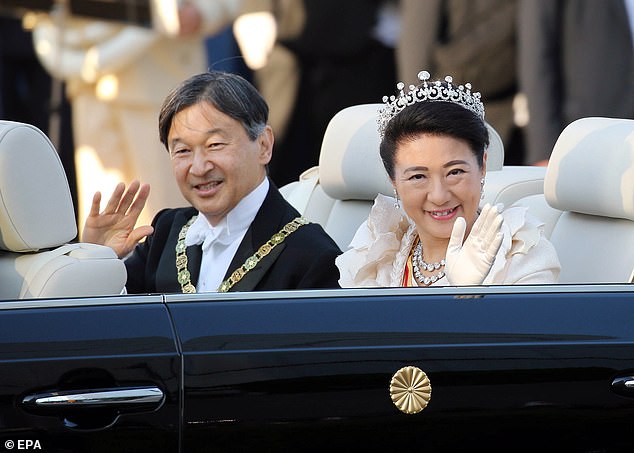 Japan’s Emperor Naruhito (L) and Empress Masako are the current rulers of Japan, but the imperial family are running out of male heirs 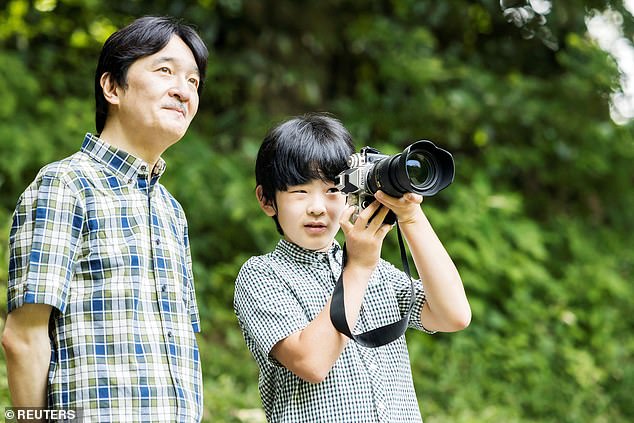 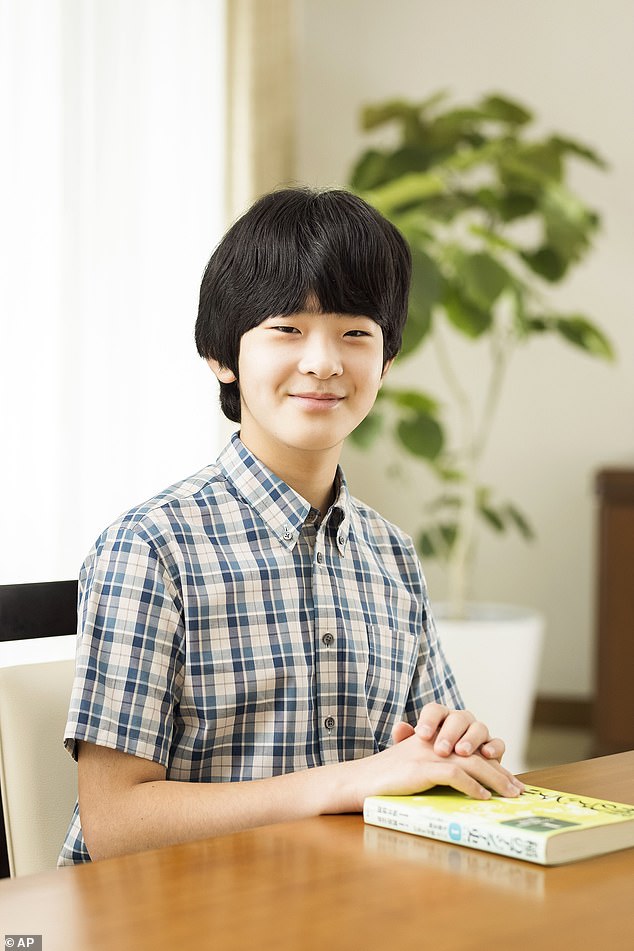 At age 15, Prince Hisahito is the only male heir to the throne aged under 55, and there is no guarantee he will bear sons in the future

Details of the plan have not been confirmed, but a leak reported by the Kyodo news agency said that an ‘expert’ ministerial panel has been convened to tackle the impending succession crisis, with Prince Hitachi and his wife Hanako placed as the prime candidates to adopt.

According to Kyodo news, they would only be allowed to adopt heirs descended from former aristocratic and imperial families so as to maintain the ‘imperial status’ of the bloodline.

Young males from aristocratic families would share a common ancestry with the present imperial family and would therefore be able to supply a new stable of eligible males.

But critics have asked why the ministerial panel have not considered what appears to be the most popular, and obvious, solution to the problem: allowing a female emperor to rule the imperial family.

Women have long played a prominent role in Japanese culture, business and academia, and the nation could soon welcome its first female Prime Minister if Sanae Takaichi, 60, is elected to succeed the outgoing prime minister, Yoshihide Suga, who is set to resign.

Prince Hitachi, 85, is the man likely to adopt an eligible heir if Japanese authorities decide to press ahead with plans to amend the current law

European monarchies meanwhile have largely accepted female rulers, and another prime ministerial candidate, Taro Kono, said last year: ‘I think it is possible that imperial princesses, including Princess Aiko, could be accepted as the next monarch.’

But a small, powerful group of traditionalists, many of whom are members of Japan’s ruling Liberal Democratic party, say that thousands of years of tradition would be broken should women be allowed to rule.

They believe that current emperor Naruhito is the direct descendant of one of the world’s oldest royal lines which can be tracked all the way back to the first emperor Jimmu (711-585BC).

It is believed that Jimmu was a direct descendant of the sun goddess, Amaterasu, and that since then the line has been maintained by male heirs. If the lineage is broken, traditionalists fear the public will no longer see the need for an emperor.

But the traditionalists again are opposed to this, as any son of a princess who marries outside the imperial bloodline would not carry the male Y chromosome inherited from the mythical Emperor Jimmu. 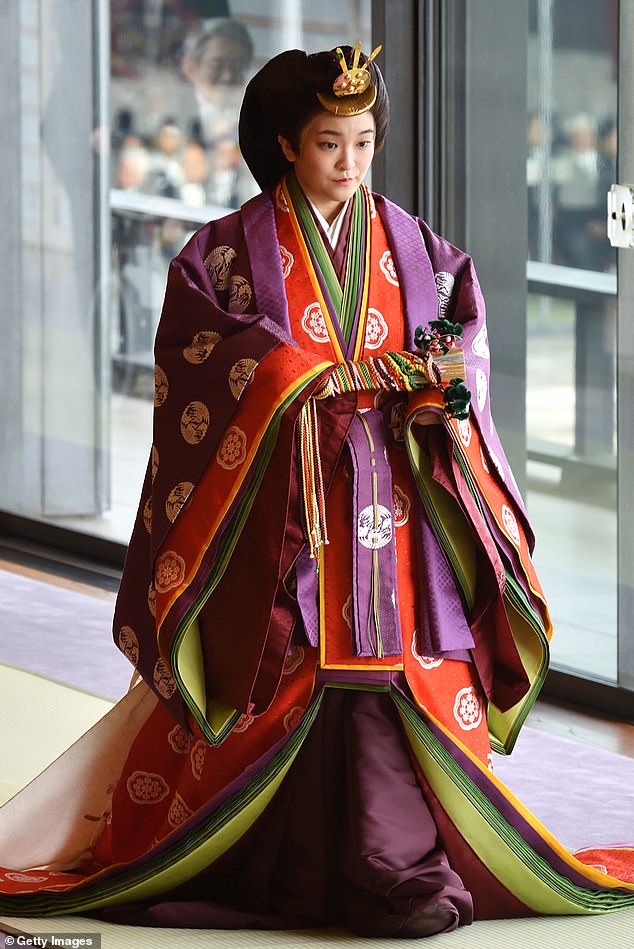 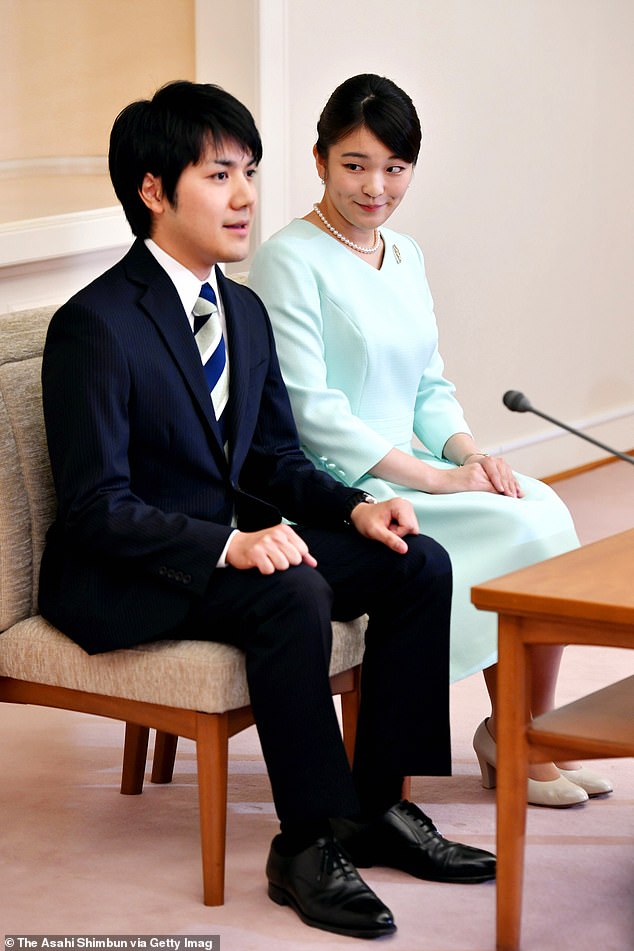 Princess Mako of Japan, 29, will give up her royal title to marry her fiancé, Kei Komuro, later this year. However, even if a law change permits her to remain part of the imperial family, traditionalists still believe that any son she may bear must not ascend the throne

Princess Mako, 29, is planning to marry her fiancé Kei Komuro, also 29, at the end of the year.

If the couple marry as planned, Princess Mako would lose her right to be part of the Japanese imperial family under current law, as female members of the family revoke their status if they marry a ‘commoner’.

According to The Times, Mako would also turn down a ¥150 million (£990,000) handout from the Japanese government, which is traditionally paid to princesses who lose their imperial status when they marry.

The substantial wedding sum is intended ‘to preserve the dignity of a person who was once a member of the imperial family’.

The decision to forego the payment is likely due to the controversy around her fiancé that arose shortly after announcing their engagement in 2017.

Following the wedding, Mako reportedly plans to move to the United States where Komoru is waiting for the results of his US law exams, intending to take up a job offer with a New York law firm.