A billionaire Baron and his wife who were planning to build ‘the most sustainable hotel in the UK,’ have been slammed by their neighbours for alleged ‘daily helicopter flights’ to the site of the development.

Others praised the couple for creating employment for ‘local youngsters’ and ‘university students’ through the project.

The 74-year-old, who lives in nearby Daylesford House, with her husband, the JCB billionaire Lord Anthony Bamford, had set three mission principles for the new hotel, one of which was ‘to create the most sustainable hotel in the UK.’

Lady Bamford became famous for launching Daylesford Organic Farm, based in the private village but with farm shops across London, which boasted on its website of being one of the most pioneering and sustainable farms in the UK.’ 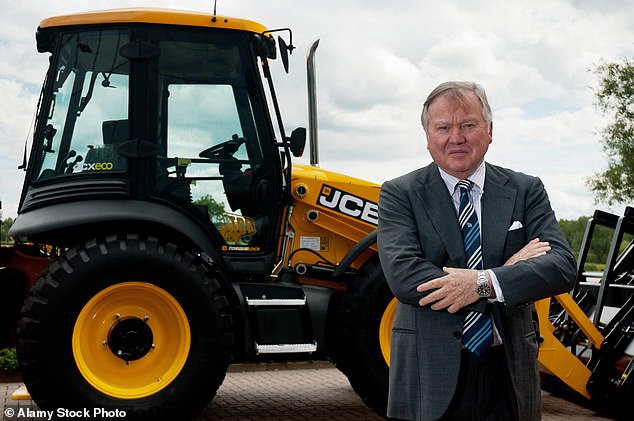 However, residents who live near the proposed site of the hotel, based at a historic mill on Station Road in Kingham, claimed the Bamford’s business enterprises had caused pollution in their area due to increased traffic, not least the air traffic from helicopters allegedly flown on behalf the Bamfords.

Local couple Christopher and Delphie Stockwell, who claimed to be long-term residents of Kingham, lodged an official objection, stating: ‘On top of the (very) mixed benefits of the impact of Daylesford on the area, there is also the daily coming and going of the helicopter.

‘It might be considered surprising that a family supposedly encouraging sustainable lifestyles and healthy eating should choose to travel principally by helicopter. However, this choice has very negative effects on neighbours who have the helicopter flying over several times a day (sometimes more at weekends) and landing close enough to Kingham that the noise is a significant factor in the lives of locals in Daylesford and Kingham.

‘It is very anti-social. Can the Cotswold and West Oxfordshire Councils not do anything to protect our climate, our health and our well-being by restricting helicopter usage?

‘This development is not what the village needs and probably not what West Oxfordshire needs. However, given current planning guidance it may be inevitable.’

The letter of objection to the council went on to say the Stockwells ultimately supported the proposal for a new hotel, calling the application ‘well thought through and sensitive to the site’, but on condition that proper provision was made for staff accommodation and parking.

A flurry of other letters of objection had been submitted to West Oxfordshire District council, opposing the site plans on the grounds that it was too large and would cause a bottleneck of traffic for locals.

Emily Woodfield, who lives directly opposite the site, said: ‘The Mill House is barely 7.5 acres and proposing 46 rooms. This plan is grossly disproportionate for this site. The increased traffic and noise given the size of the site will not be absorbed in the land and will cause issues for the direct neighbours.’

Jennifer Dean, also of Kingham, said: ‘For those who live here in Kingham, yes, it is correct that we do not want more traffic, cars, bikers et al effecting our quiet lives; that is why we live here. A 46 room hotel is huge for the size of this village; one usually sees this size of hotel in city and urban areas.

‘I see no real advantages to any of the small, permanently residential, local community in this project which simply earns revenue for the developers who already own multiple properties here and in London. The village has become cramped with infill properties being built in every corner and it character is under threat, and once gone, we cannot get it back.’

Anthony and Margaret Mann, both of Kingham, wrote: ‘The Wild Rabbit (under the same ownership) has already caused significant parking problems in the village. The village simply cannot accommodate parking for the potentially large influx of additional cars visiting this hotel at a time when it is largely occupied (which is presumably the intention). 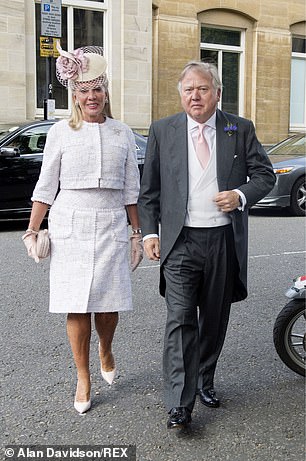 Residents who live near the proposed site of the hotel, based at a historic mill on Station Road in Kingham, claimed the Bamford’s business enterprises had caused pollution in their area due to increased traffic. Lord and Lady Bamford pictured above

‘It is hard to see how those creating these plans can have thought that their provided spaces would be enough. Their experience at the Wild Rabbit and commonsense ought to have dictated otherwise. This is a second significant hole in the plan. This influx of traffic, added to the additional traffic needed to supply the hotel, will add to the bottleneck of traffic in the village.’

Lord and Lady Bamford live on a 1,500-acre estate and both sit on the board of construction equipment company JCB, famous for its JCB diggers, where Conservative life peer Lord Bamford, also known as Baron Bamford of Daylesford, was also chairman.

Some locals, despite asking for the plans to be scaled down, wrote in support of the Bamfords personally, with Samantha Clarke saying: ‘The Bamfords will no doubt do a great job and it will be well maintained.

‘Daylesford have been a great employer for local youngsters and university students over the years including my son and I feel that youngsters may well need this opportunity in the hard times to come.’

A plan submitted on behalf of the Bamfords by Edgars development company said other key principles of the development would be design that is considerate to the Historic Mill, celebrating the past and creating its future and to respect and enhance the landscape and setting of the site.

The application said: ‘The applicant also has other interests in the Kingham area, including the Wild Rabbit Inn. This provides a unique opportunity to rationalise the operations and servicing at the Mill House hotel site and link it to other sites under the applicant’s ownership.

‘The applicant believes that the sensitive redevelopment of the site can be achieved in order to continue its historic hospitality uses and conserve the special qualities of the site. The client has a strong track record in West Oxfordshire and the Cotswolds in both investing in the local economy and in conserving its historic environment and special landscape qualities.’

Boris Johnson is the most well-known international chief in Ukraine, new polling has unveiled.Information released by Lord Ashcroft polls clearly show the British Prime Minister with a 90%...