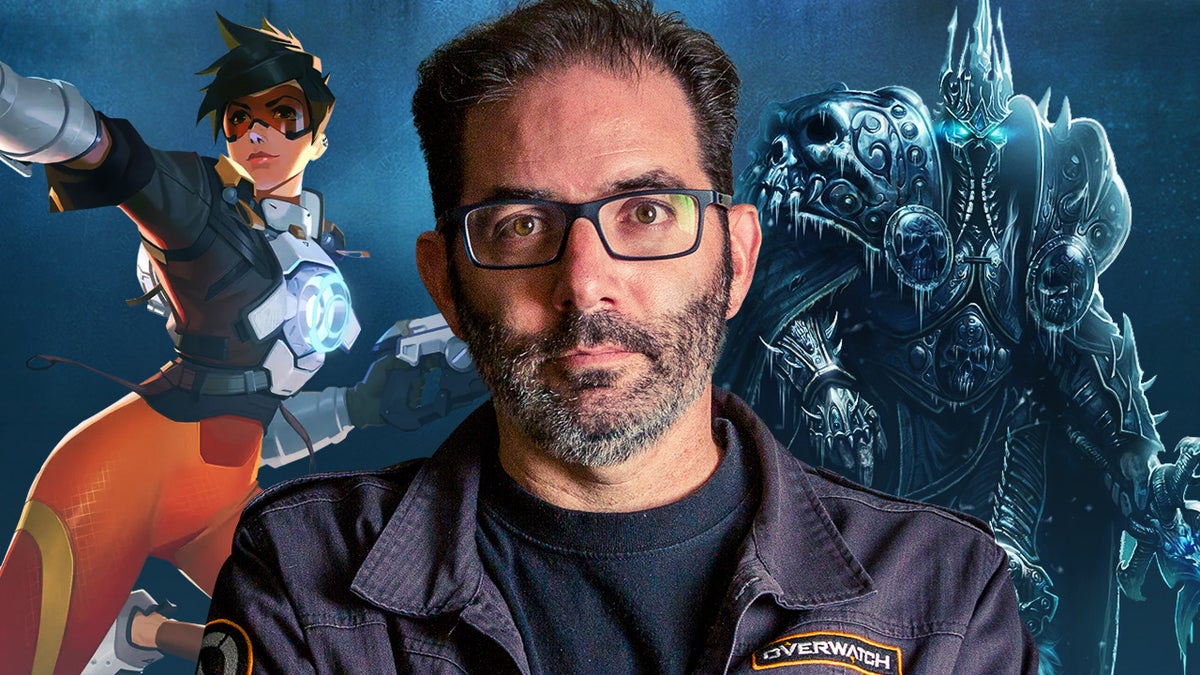 Jeff Kaplan served as, until his recent departure, the Vice President of Blizzard Entertainment. But for Overwatch fans not tuned into Activision-Blizzard’s corporate hierarchy, he may most humbly be known as “Jeff from the Overwatch team.” That’s how he introduced himself at the start of every Developer Update video, a greeting that downplayed his status as Game Director, and emphasized that Overwatch was a team effort. But while he didn’t shout them from the rooftops, his achievements speak for themselves: Jeff Kaplan was, for 19 years, one of Blizzard Entertainment’s most vital and important innovators.Blizzard recruited Kaplan in May 2002 specifically to help it expand into a whole new genre: the MMORPG. Back at the start of the millennium, the studio’s experience was predominantly in the real-time strategy space, and the team lacked the expertise to help inform the company’s next venture. And so Rob Pardo, one of Blizzard’s lead designers, looked to the most obvious place to find an MMO expert: an MMO itself. At the head of EverQuest’s prominent Legacy Of Steel guild, he found exactly the kind of person Blizzard was looking for: a player named Tigole, a passionate (see: outspoken) and well-known member of the game’s community. Outside of EverQuest, he was known as Jeff Kaplan.Pardo invited Kaplan to a series of lunches. “With hindsight, what I didn’t realize at the time was that those guys were interviewing me for a role with World of Warcraft,” Kaplan recalled during an interview with Game Informer.

Have you played Overwatch?

Six months later, Kaplan joined the World of Warcraft team, helping design quests for what would eventually become the genre-defining MMORPG. A significant part of the reason behind World of Warcraft’s success was its approach to questing, something Kaplan helped shape. Previous MMOs, like EverQuest, had very few scripted quests and were largely freeform, player-directed games. But Kaplan, along with his design partner Pat Nagle, forged World of Warcraft’s questing system as a near-constant supply of hand-crafted missions.

Player testing only reinforced the need for numerous quests. “Our old estimates for how many quests we thought we were going to do versus how many quests we ended up doing were radically off,” Kaplan told Edge. And so the world of Azeroth was designed that it would always have new stories for you to explore, even if that was just killing six rats for a farmer.

By 2008 Kaplan was World of Warcraft’s Game Director, leading the charge on one of the series’ landmark expansions.

This approach helped make World of Warcraft significantly more accessible to MMO newcomers. Unsurprisingly (at least in hindsight), his efforts were part of its colossal success. After several promotions, by 2008 he became World of Warcraft’s Game Director, leading the charge on what is still to this day considered one of the series’ landmark expansions, Wrath of the Lich King. With a focus on story (entwining the player’s story with that of legendary antagonist Arthas), Kaplan ensured that WoW’s second expansion was a vital part of not just Blizzard’s MMO, but the entire Warcraft mythos.

Kaplan left World of Warcraft behind the day after Wrath of the Lich King shipped. His new calling was, naturally, Lead Game Designer on a new MMO that was in the works. He was the guy Blizzard employed for his MMO expertise, afterall. This new project was going to be the most ambitious thing Blizzard ever made, and its working title reflected that: Titan.

But Titan would never see the success that World of Warcraft did. In fact, Titan infamously would never see the light of day. In the desperate struggle to make something – anything – from the ashes of Titan’s design, Kaplan came up with what is, undoubtedly, his greatest achievement at Blizzard: Overwatch.Kaplan was enamoured with the class designs and RPG abilities that fellow designer Geoff Goodman had created for Titan. “I started thinking about a more tightly scoped game using that Geoff Goodman concept of dozens of classes with abilities,” he explained to Edge. Kaplan envisioned a game in which these faceless classes became playable heroes with names and backstories. But rather than an MMO, this would be a PvP shooter.

“Team Fortress 2 was just mega in my mind,” Kaplan told Game Informer while discussing Overwatch’s genesis. “There was such inspiration from that, so as we were rolling off of Titan and we were coming up with ideas that we as a team were super passionate about, we really chased our hearts more than anything else.”

Kaplan’s vision was embraced by the team, which led to them pitching it to Activision. “They were super polite and super nice to us, but you could sense this undercurrent of, ‘Oh god, of all things, what are you idiots doing?’” Kaplan recounted to Edge. But while perhaps another shooter alongside Call of Duty was not part of Activision’s original plan, Kaplan says the character designs won over CEO Bobby Kotick. “What that bought us was that we had until March to put together a core combat demo of the game,” said Kaplan.

A successful demo led to full development, and Overwatch would eventually be revealed at BlizzCon in 2014. Its fresh new world and innovative rethinking of MMO and MOBA-style class abilities as shooter mechanics quickly won the hearts of fans.

Kaplan’s Developer Update videos are the gold standard example of direct transparency with a game’s player base.

As Overwatch’s Game Director, Jeff Kaplan became something of a community celebrity. Following in the footsteps of Hearthstone’s Game Director, Ben Brode, Kaplan made himself the face of Overwatch. His friendly, mild-mannered personality was endearing, and he was soon lovingly known as ‘Papa Jeff’ by the community. Kaplan has always taken this in his stride, ever happy to join in on a meme, even going as far as to sit by a fire in near-silence for an eight-hour festive livestream just for the fun of it.

But it was really Kaplan’s innovative approach to communication that made him such an effective face for Overwatch. His Developer Update videos are, to this day, the gold standard example of direct transparency with a game’s player base. On a semi-regular basis, Kaplan would explain in clear detail the changes coming to Overwatch, and why those changes were being made. He used straightforward language, so the updates felt like a friend talking with you, rather than a marketing team talking at you. All this made it easy to understand the thinking behind Overwatch’s many alterations, and invited players to feel like they were part of the decision-making. There’s perhaps no better example of this than Role Queue, the team composition system created after years of back-and-forth debate between players and the Overwatch team.

Combined with being ever-present on the Blizzard forums, there was a constant sense that Kaplan cared about Overwatch’s players, or at the very least was actively listening to them. And even in moments when the conversation could become exceptionally heated – the Mercy resurrection rework was a particularly rough time – Kaplan would be there answering questions. It always felt as if players were part of Overwatch’s development. It’s hard to imagine this would be the case without Kaplan’s particular approach, and Blizzard would be ill-advised to abandon the strategy going forward, especially in regards to Overwatch 2.No matter what approach the company takes going forward, though, Blizzard won’t be the same place without Jeff Kaplan. But it’s also important to remember that Kaplan never saw himself as the ivory tower leader on his projects. He was always Jeff from the Overwatch team, never Jeffrey Kaplan, Game Director. His Developer Updates would regularly champion his colleagues, be that the design decisions of Aaron Keller, the heroic creations of Geoff Goodman, or the lore drops from Michael Chu. Kaplan was a team player, and, at least as far as outsider perceptions go, seemed to foster that approach among his peers. And as Keller steps up as Game Director, it seems sensible to expect at least some of Kaplan’s spirit to remain.

Over 19 years, Jeff Kaplan has been one of Blizzard’s most important voices. Recruited for his passion, his work helped shape one of the core pillars of not just World of Warcraft, but modern MMO design. His strength of vision helped rescue Blizzard’s most notable disaster, and turn it into what is arguably the developer’s most significant mainstream game in Overwatch. And as the head of that project, he refined communication between developers and players in a way few other studios have been able to replicate. He will be missed. But, just like Blizzard superstars Mike Morhaime and Chris Metzen, who also stepped away from the company in recent years, Jeff Kaplan leaves behind him a legacy of hugely successful creativity and innovation that has inspired not just those at Blizzard, but studios all over the world.

Covid Australia: Who can leave and enter country amid travel ban