A supermum-of-16 has offered a glimpse into what it’s like to order Friday night takeaway when you are part of ‘Australia’s biggest family’.

Jeni Bonell and her husband Ray, from Queensland, have a super-sized family consisting of nine sons and seven daughters, aged between six and 31.

The 51-year-old mother – who usually spends an average of $450 on groceries every week – treated her family to Hungry Jacks to celebrate her son’s 10th birthday. 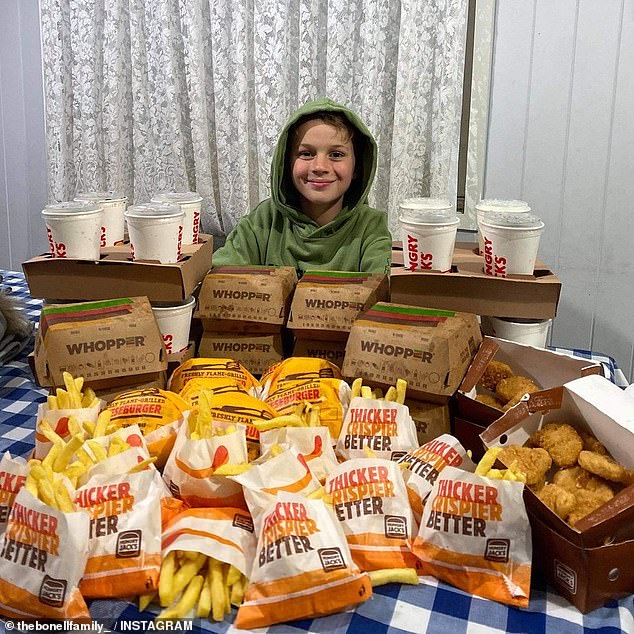 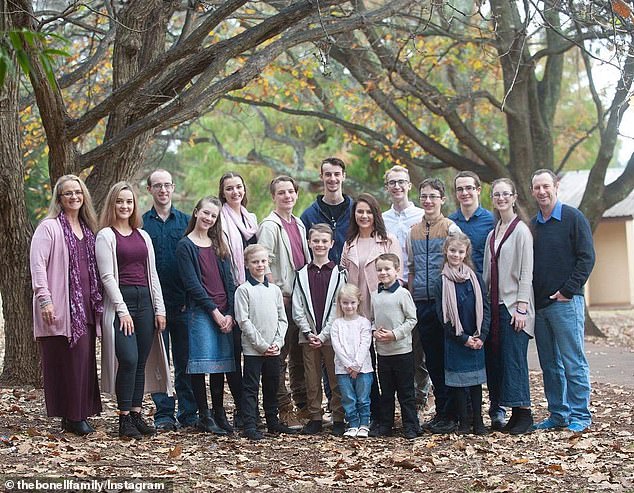 The parents-of-sixteen have nine sons and seven daughters, aged between six and 31

‘Mummy is definitely feeling all the feels about all her babies growing up… Loving just the little bit of takeaway for his birthday dinner,’ she wrote on Instagram.

In her post, she cheekily wrote ‘feeding a crowd’.

Her post comes just four months after the mum shared a picture showing what it’s like to ‘pop to the shops for bread and milk’.

She usually does on a huge supermarket shop at the start of the week to stock up on pantry staples, fresh meat, fruits and vegetables, spending an average of $450.

But the stock would only last the family half the week. And so she would return to the store mid-week to pick up essential items such as milk, bread and fresh produce. 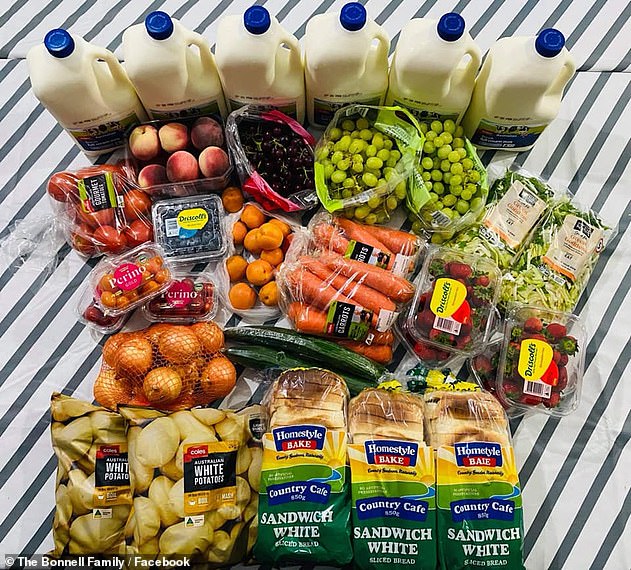 In one of her mid-week shops, she picked up six bottles of 3L milk, three loaves of sliced bread and an array of fresh fruits and vegetables.

‘When you just need milk, bread and some fruit and vegetables,’ she wrote on Facebook, alongside a huge grocery haul of her ‘quick shop’.

Dozens of people were amazed with her shop, with one joking: ‘You don’t need to join a gym. So much weight training going on, lifting the milk jugs.’ 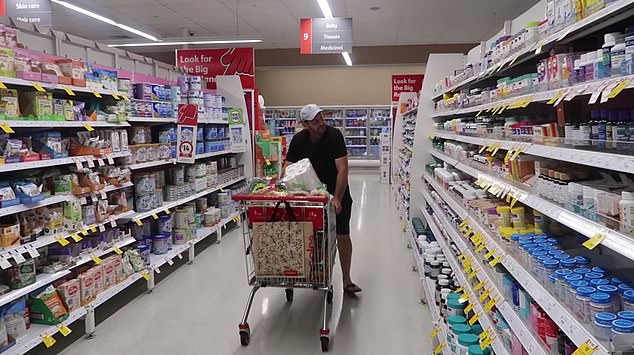 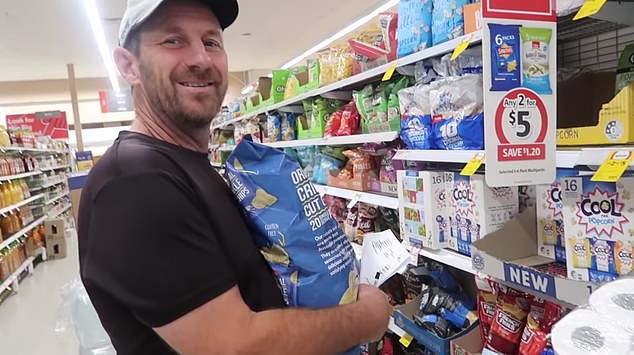 The electrician dad was tasked with picking up essential items including milk, bread, fresh fruits and vegetables as his wife stayed home to recover following surgery

Earlier this year, her electrician husband Ray was tasked with picking up grocery items while she recovered at home following surgery to remove a tumour on her kidney after her cancer returned for the second time.

With the help of his daughter Eve, the pair purchased 10 boxes of breakfast cereal, 15 litres of milk, four loaves of bread, 40 ice cream popsicle sticks, and an array of fresh fruits and vegetables.

‘As you all know my wife Jen is recovering from a large operation and it looks like it’s dad’s turn to do the groceries,’ Ray said in the latest YouTube video.

‘Jen usually keeps the freezer well stocked so we need to go and get some basics like bread, milk, fruits and vegetables.’ 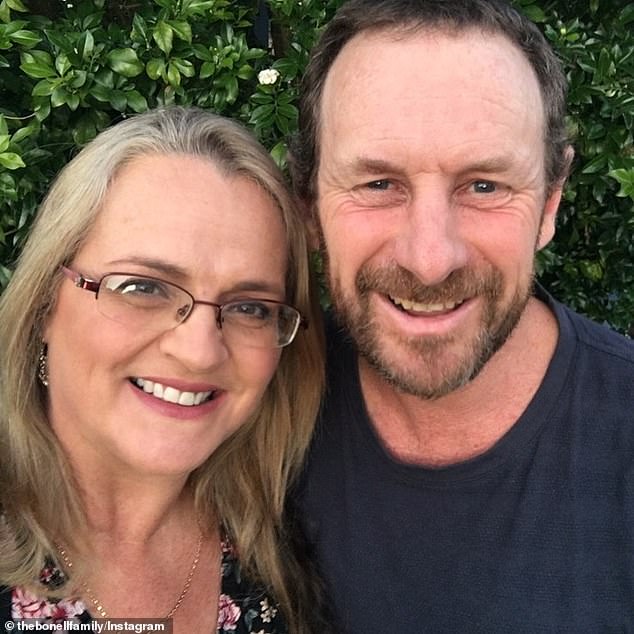 After arriving home, the pair revealed what they purchased for the family.

Ray then joked a ‘few extra things had fallen into the trolley’ which included two boxes of Cheezels, potato chips, Samboy, flavoured milk and Arnott’s biscuits.

‘This definitely looks like a dad shop,’ he said.

‘And most importantly we’ve got some more toilet paper.’ 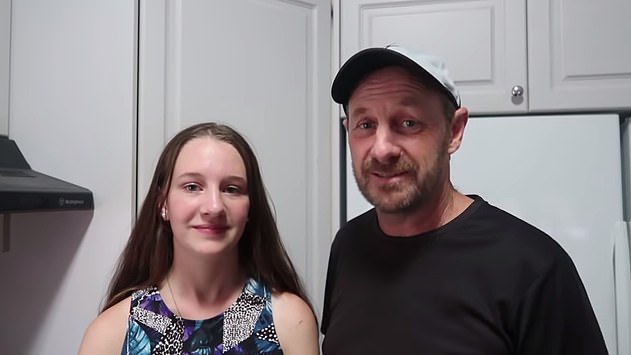 With the help of his daughter Eve, the pair purchased 10 boxes of breakfast cereal, 15 litres of milk, four loaves of bread, 40 ice cream popsicle sticks, and fresh fruits and vegetables 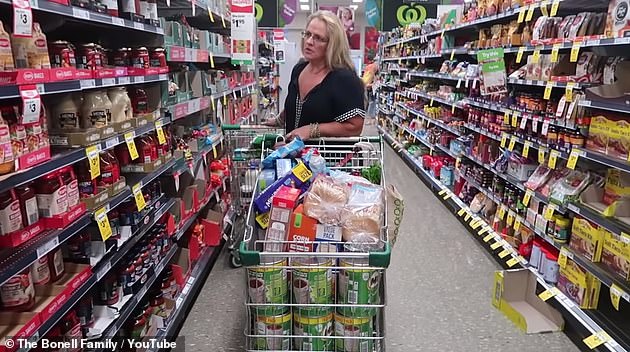 Ray described the grocery haul as ‘only a little shop’.

To keep costs down each week, the mother previously said she always buys homebrand items, stocks up on half-price products and buys fresh meat and fresh produce in bulk.

‘So I tend to buy up whatever we need to make meals for that week to add to our supplies or if I have something that I find that’s on special or half-price or it’s a great bargain, then I will buy up on that product and we will stockpile it,’ she said.

‘We’ve bought certain ingredients to go with certain meals that we are going to make this week – and the rest of it is basically we are just filling the cupboards back up to what fits in the pantry.’

Normally the family would drink through 50 litres of milk per week, but Ms Bonell said last year they are trying to cut back on the dairy.

‘We’re trying to pull back on milk for a little bit just for budget sake so [I bought] six three-litre bottles, and we’re trying to get by with just 12 three-litre of bottles per week,’ she said. This means the family is currently drinking 36 litres of milk a week.

Inside the house with a million-dollar view in Howrah, Tasmania

Queueing at top of the world: Climbers are scaling Everest in record numbers despite Covid outbreaks

From teenage tears to European champion: How Cristiano Ronaldo became a Euros legend

Kawhi Leonard had the best dunk of this year' NBA playoffs, but later left the LA...