Supporters of Jeremy Corbyn poured around £10,000 into a ‘legal fund’ for the former Labour leader on Thursday as he was suspended from his party for downplaying a damning report into anti-Semitism.

The donations were made to a Go Fund Me site set up in July by a supporter after Mr Corbyn faced legal action for criticising the party’s decision to apologise and pay damages to anti-Semitism.

Multiple donations are being made each minute, despite the Equality and Human Rights Commission’s report on Thursday damning Labour’s handling of anti-Semitism complaints when Mr Corbyn was Labour leader. 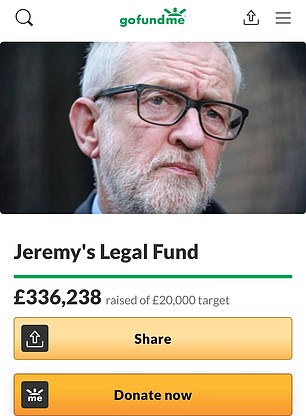 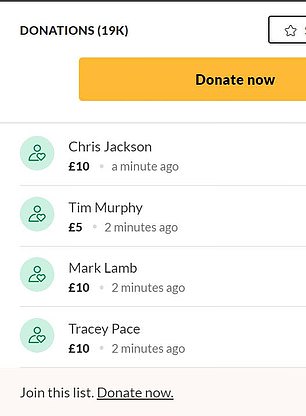 Supporters of Jeremy Corbyn poured around £10,000 into a ‘legal fund’ for the former Labour leader on Thursday as he was suspended from his party for downplaying a damning report into anti-Semitism 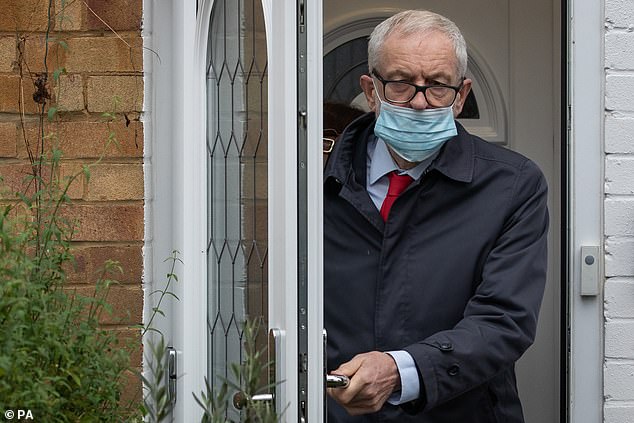 Mr Corbyn (pictured on Thursday) was suspended from Labour after he sparked fury by saying in a statement released this morning the ‘scale of the problem was also dramatically overstated for political reasons by our opponents inside and outside the party, as well as by much of the media’

The landmark report found ‘significant failings in the way the Labour Party has handled anti-Semitism complaints over the last four years’.

But Mr Corbyn sparked fury in a statement released this morning by saying the ‘scale of the problem was also dramatically overstated for political reasons by our opponents inside and outside the party, as well as by much of the media’.

His comments prompted current Labour leader Sir Keir Starmer to suspend him from the party this morning.

Since then, thousands of donations ranging from £10 to £50 have been made to ‘Jeremy’s Legal Fund’ online.

The fund was set up in July by Carole Morgan, from Ryde in South East England, to let the former Labour leader know his fans have ‘not forgotten him’.

Less than 24 hours after being created, the £20,000 target was smashed and quickly rose to more than £200,000, putting Mr Corbyn under pressure to pay the money back. 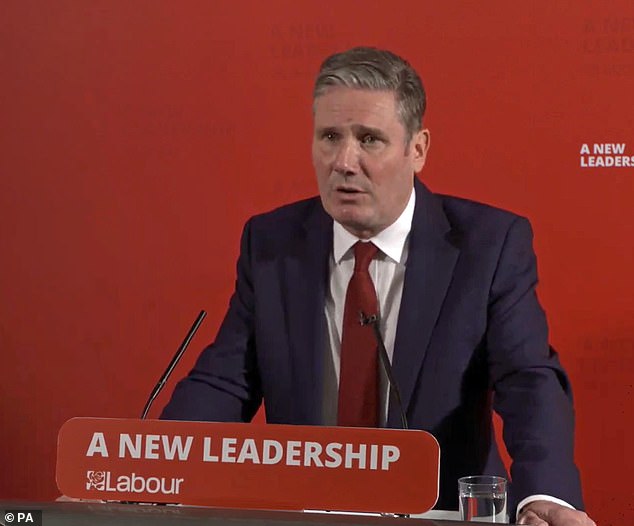 The page was set up after seven former party staff members and journalist John Ware said they were taking legal action against the former opposition leader, after he attacked successor Sir Keir’s decision to settle a libel claim sparked by a BBC Panorama documentary.

Mr Corbyn said at the time that the party’s decision to make a £500,000 pay-out was ‘disappointing’ and ‘a political decision’.

Mr Corbyn went on to say that the legal advice the party received said it had a ‘strong case and the evidence in the leaked Labour report that is now the subject of an NEC inquiry led by Martin Forde QC strengthened concerns about the role played by some of those who took part in the programme.’

When asked if action would be taken arising from Mr Corbyn’s statement after the hearing, lawyer Mark Lewis, from Patron Law, who represented the Panorama whistleblowers and Mr Ware, said: ‘I can confirm that I have been instructed to pursue cases.’

On Thursday, Labour said they had suspended Mr Corbyn for his ‘failure to retract’ his statement which said the findings of the EHRC’s report were ‘dramatically overstated’ 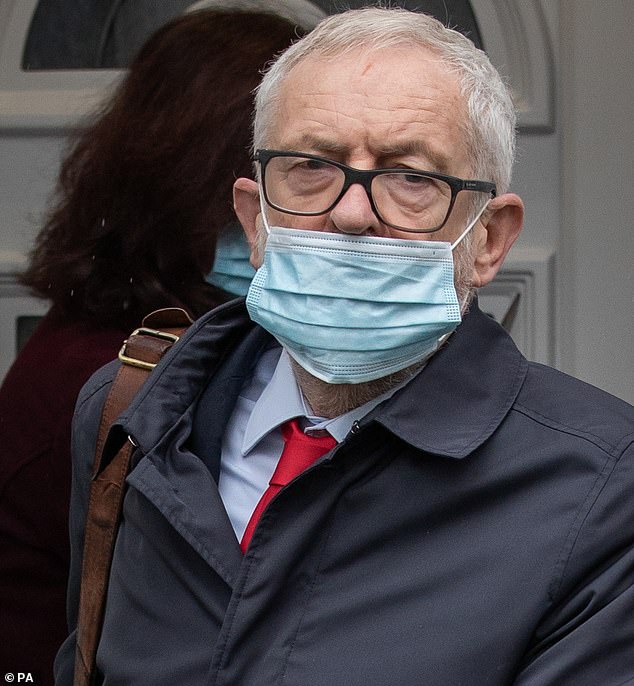 After he was suspended, Mr Corbyn blasted the decision a ‘political intervention’ which he said he would ‘strongly contest’

On Thursday, Labour said they had suspended Mr Corbyn for his ‘failure to retract’ his statement which said the findings of the EHRC’s report were ‘dramatically overstated’.

A spokesman said: ‘In light of his comments made today and his failure to retract them subsequently, the Labour Party has suspended Jeremy Corbyn pending investigation.

‘He has also had the whip removed from the Parliamentary Labour Party.’

In response, Mr Corbyn said in a statement on Twitter, ‘I will strongly contest the political intervention to suspend me.

‘I’ve made absolutely clear those who deny there has been an antisemitism problem in the Labour Party are wrong.

‘I will continue to support a zero tolerance policy towards all forms of racism.’

When he was earlier asked if he would quit the Labour party, he earlier told broadcasters, ‘Of course not. I am proud to be a member of the Labour Party, I joined the Labour party when I was 16, I’ve fought racism all my life, and I’ll fight racism for the rest of my life,’

Among the charges levelled at Labour by the EHRC were that out of 70 anti-Semitism complains analysed, 23 showed signs of ‘political interference’ by Mr Corbyn’s office and others.

They also blasted ‘a lack of leadership within the Labour Party on these issues’, which it said was ‘hard to reconcile with its stated commitment to a zero-tolerance approach to anti-Semitism’. 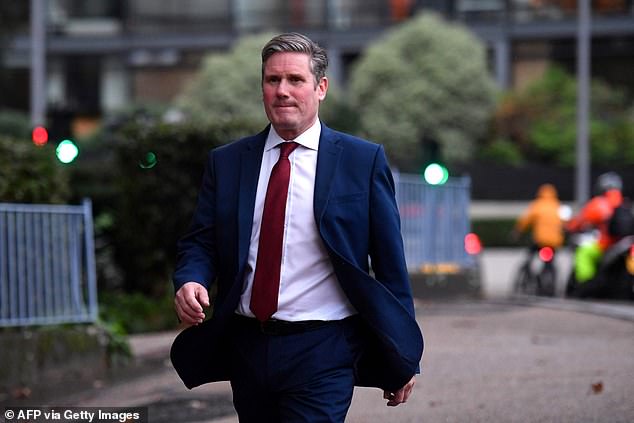 On Thursday, Labour said they had suspended Mr Corbyn for his ‘failure to retract’ his statement which said the findings of the EHRC’s report were ‘dramatically overstated’

Additionally they broke equalities law over two cases, including one which involved former London mayor Ken Livingstone ‘using antisemitic tropes and suggesting that complaints of anti-Semitism were fake or smears’ in 2016, before he quit the party.

Mr Corbyn was not directly censured by the report, which looked at the party as a whole.

New leader Sir Keir Starmer had initially tried to sidestep the issue of whether he would take direct action against his predecessor in the wake of the report as he addressed reporters this morning.

This was despite saying: ‘If – after all the pain, all the grief, and all the evidence in this report – there are still those who think there’s no problem with anti-Semitism in the Labour Party, that it’s all exaggerated, or a factional attack, then, frankly, you are part of the problem too. And you should be nowhere near the Labour Party either.’

‘Labour is finally saying enough is enough, anti-Semitism can never be tolerated in our party. Now we can finally move on.’

The charges against Labour in damning 130-page report

The pandemic boosted Apple: Company sold more Macs this summer than ever before

The pandemic boosted Apple: Company sold more Macs this summer than ever before