The rhetoric is inflammatory, the mood combustible. In the wake of Jeremy Corbyn’s suspension from the Labour Party after the devastating independent report into the failure of his leadership to tackle anti-Semitism, his supporters are in uproar. There is explosive talk of mass resignations, splits and even civil war.

The tone has been set by the Unite general secretary Len McCluskey, Corbyn’s biggest trade union ally, who called the decision ‘a grave injustice which, if not reversed will create chaos within the Labour party and, in doing so, compromise Labour’s chances of a general election victory’.

In ominous tones he added, ‘a split party is doomed to defeat’. That view has been backed up by other Corbyn followers. His former aide, James Schneider, warned that ‘this ends very badly for everyone’, while another Left-winger predicted the row ‘will consume the leadership for the next four years’. Already, a fund to pay for a Corbyn legal challenge has reportedly raised £350,000.

That much is unarguable. If the threats of open revolt become a reality, it will certainly be disastrous for the Labour movement.

Len McCluskey is right to say that the electorate does not look favourably on divided parties, as history shows. When a large group of centrist Labour MPs left the party in the early 1980s to join the SDP, they helped to cement the Tories in power for 18 years. Similarly, the split under Ramsay MacDonald during the formation of the National Government in 1931 led to almost a decade of Conservative dominance.

But in truth, there will only be civil war in Labour’s ranks if Len McCluskey tries to start one. And he will quickly and painfully find that it will be a very short, one-sided struggle. 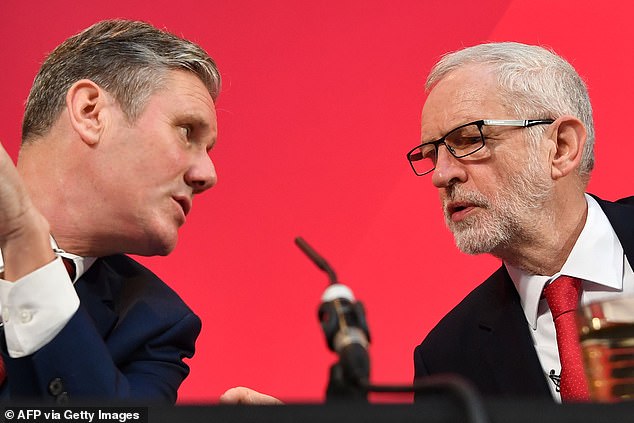 The fact is that the Labour Party is overwhelmingly united behind Sir Keir Starmer on this issue. For all the noise generated by the hard Left, there is precious little support for Corbyn.

That is partly because this is not a question of personalities or policies but of Labour’s fundamental values. A party that is committed to equality and racial justice cannot allow a culture of anti-Semitism to fester in its midst, as happened under Corbyn.

This week’s report from the Equalities and Human Rights Commission could hardly have been more damning of his leadership, pointing out that, in its tolerance of anti-Semitic discrimination and abuse, the party had even broken the law, a shameful verdict for a democratic organisation.

For Labour, it had all the more potency because not only is the EHRC a Labour creation, but also the 2010 Equality Act, under whose provisions the inquiry took place, was piloted through the Commons by Labour’s Harriet Harman.

Any sensible former leader, when confronted by the EHRC’s report, would have swallowed hard, accepted the findings, and shown some contrition. But that is not Corbyn’s way. Despite the wealth of incriminating evidence, he claimed that anti-Semitism within Labour was ‘overstated for political reasons by our opponents’.

His response was both crass and revealing. Crass because he put himself in a position where Keir Starmer had no alternative but to act against him. And revealing, because his words encapsulated precisely the instinct for denial which allowed anti-Semitism to flourish. As Starmer himself put it, ‘those who deny there is a problem are part of the problem’.

On this question, Corbyn and McCluskey are on the wrong side of history.

Moral repugnance at their stance is one explanation for the lack of any appetite within the party for rebellion against Starmer. Another is that Corbyn’s support has always been wildly exaggerated. He rose to the top in 2015 partly through good fortune, when his predecessor Ed Miliband introduced an ill-judged reform, which enabled thousands of hard-Left activists to vote in the leadership contest simply by paying a nominal fee to Labour.

The timing of his bid was also helped by profound disenchantment with the party’s establishment after two heavy general election defeats. 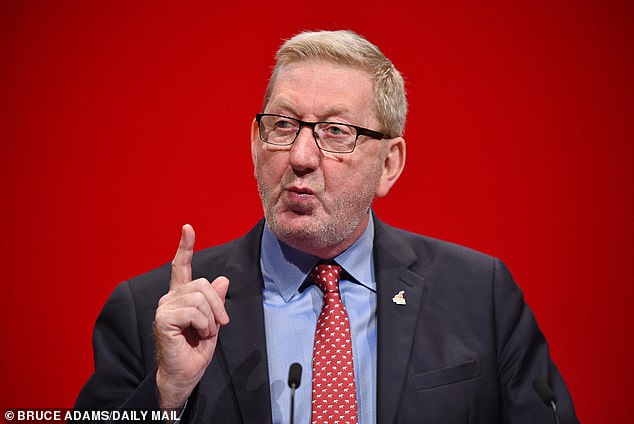 Len McCluskey, (pictured) general secretary of the Unite union, described Mr Corbyn’s suspension as a ‘grave injustice’ but urged members angry about it to remain in the party

But despite all the efforts of his pressure group Momentum, he never gained real ascendancy among either MPs or the constituency parties. It should be remembered that in 2016, no less than 80 percent of the Parliamentary Labour Party passed a motion of no confidence in him. Nor, for all the hype, did any Momentum campaigns to deselect sitting Labour MPs succeed.

Moreover Rebecca Long-Bailey, the Left-wing candidate that he and McCluskey backed to succeed him this year, fared badly in this year’s leadership contest. She struggled to gain enough nominations and garnered only 27 per cent of the vote, against 57 per cent for Starmer. When he sacked her from the Shadow Cabinet recently over some anti-Israeli remarks, there was no backlash.

In Parliament, the Socialist Campaign Group, of which Corbyn has long been a key member, is without influence or numbers, while Momentum is a busted flush.

The strongest feeling towards Corbyn in the party now is one of profound disillusion because of his record. This is the man who led Labour to a miserable defeat in 2019, when a string of so-called Red Wall seats in the North and the Midlands went to the Tories. In east Lancashire, only Blackburn – the seat I used to represent – stayed with Labour. Burnley has a Conservative MP for the first time since 1910.

The loss of so many good Labour MPs – like Mary Creagh in Wakefield and Caroline Flint in Doncaster – at the ballot box was compounded by the exodus before the election of moderate MPs like Chris Leslie and Luciana Berger, who could not accept the extremism and anti-Semitism that Corbyn fostered.

Those departing moderates, who joined the now forgotten group Change, were sadly but quickly consigned to the wilderness.

The same fate awaits any far-Left splitters who resign in support of Corbyn.

Loyalty has always been a cherished quality in the Labour movement, partly because of the emphasis on the collective interest. Rebels might briefly gain applause, but the cheers never translate into long-term strength.

Militant MPs, independents, and SDP campaigners all failed once they abandoned the party’s embrace. When Clement Attlee expelled those two Labour titans Stafford Cripps and Nye Bevan in 1939 because they backed a cross-party popular front, there was no civil war in Labour.

Nor will there be today. McCluskey knows it. That’s why he was backpedalling so furiously yesterday, desperate to sound emollient – because even he knows that Corbyn is finished.