Jimmy Carr ‘becomes a father for the first time’

Jimmy Carr, 48, ‘becomes a father for the first time as he confirms he has a son with partner of 20 years Karoline Copping, 46’

Jimmy Carr has reportedly revealed he has become a first-time father.

The comedian, 48, is thought to have welcomed a son two years ago with his partner Karoline Copping, 46.

According to The Sun, Jimmy confirmed he is now a dad during a stand-up comedy show at the O2 Academy Brixton in London. 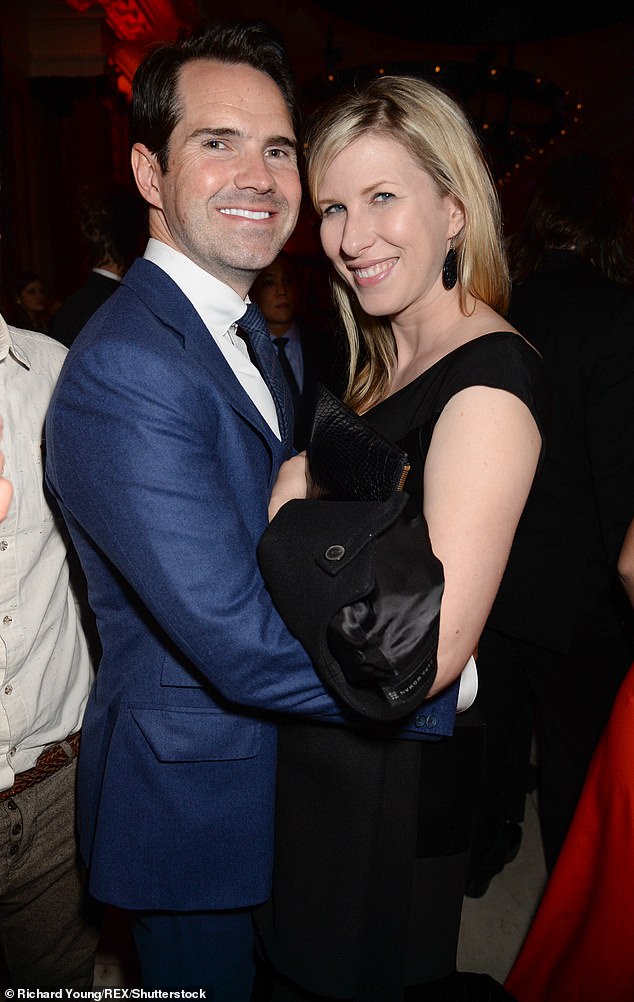 Family: Jimmy Carr has reportedly revealed he has become a first-time father (pictured with his partner Karoline Copping)

The funnyman mentioned his son during an adoption joke, telling the audience: ‘I had to tell my little boy he’s adopted. I mean, he isn’t, but the look on his face. I said, “No, no, no, you were adopted, the new family is picking you up tomorrow.”‘

In another joke, he said: ‘We’re having a gender-reveal party for our kid but we’re going to wait until he’s 21 just to be sure. With some babies you can’t tell, is it a boy or an ugly girl?’

Jimmy was first pictured pushing a pram back in March 2020 in North London where he lives with Karoline. 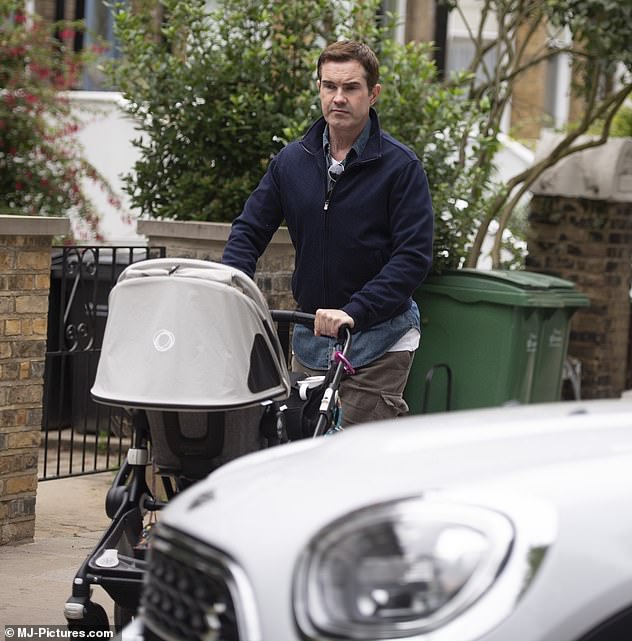 Fatherhood: Jimmy has previously been pictured pushing a buggy in North London where he lives with Karoline (pictured last month)

The comedian has been in a relationship with Channel 5 commissioning editor Karoline since 2001 after meeting her at an audition.

The pair have not previously spoken about whether they would have children together.

In March 2017, he told Radio 4’s Desert Island discs that his girlfriend’s first impression of him was ‘one-note comedian with the eyes of a sex offender’.

The star said that even though Karoline wasn’t immediately taken with him, he was instantly smitten, saying: ‘I knew. It felt perfect.’ 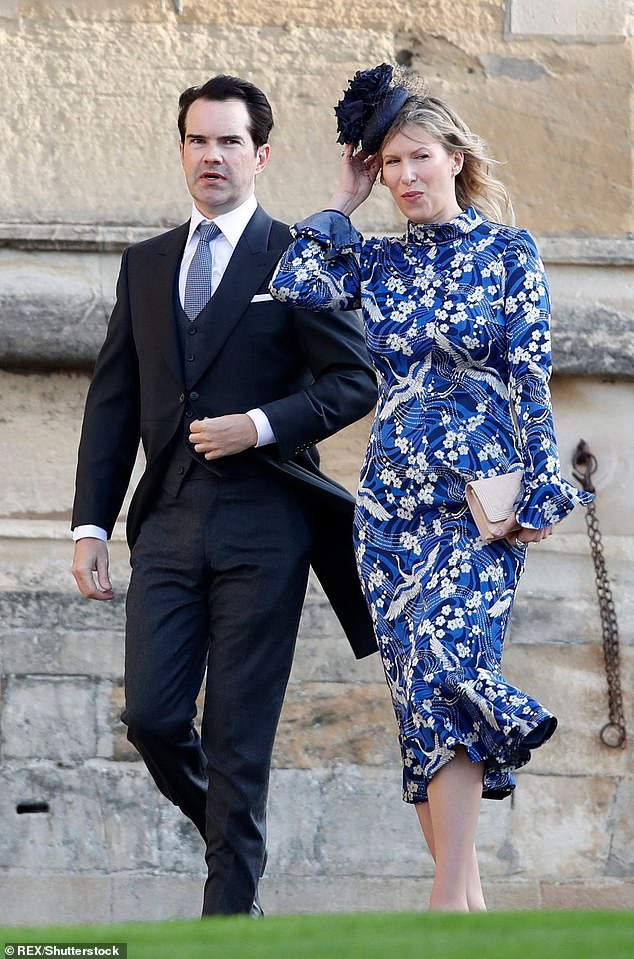 Routine: According to The Sun, Jimmy confirmed he is now a dad during a stand-up comedy show at the O2 Academy Brixton in London (pictured in 2018)

It comes after Jimmy revealed the full extent of his recent makeover after dazzling fans with his new look.

Talking on Gabby Logan’s Midpoint podcast, Jimmy said he decided to make some tweaks to his appearance after feeling disappointed that he doesn’t look as good in real life as he does on television.

He said: ‘I got my teeth done, that’s the first thing I had done, they’re more than veneers. I got every tooth in my head done in one sitting.

‘I did 12 hours in the chair the first day, then 12 hours the second, it was like a three day thing where you’ve got temporary things on, it’s pretty full on. 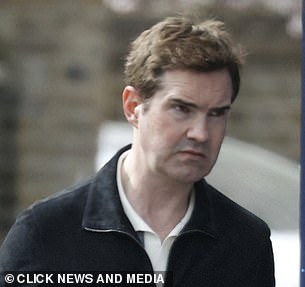 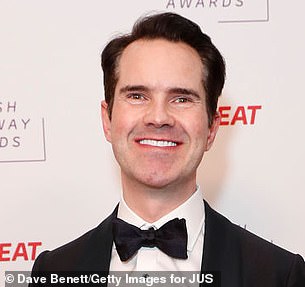 Wow: Jimmy has undergone a huge transformation recently, thanks to losing weight, getting a hair transplant and giving his teeth a gleaming makeover. Pictured right in January 2000

‘I think they gave me Rohypnol intravenously into the vein and you’re kind of out of it and they do everything and you’re fine. It’s a dream-like haze, you’re in a weird space.’

Jimmy said he wants to maintain his looks rather than change them too much.

He said: ‘I think that thing of age is that people don’t really see what’s there, people are good at pattern recognition, that’s all they do, teeth and hair.

‘Maintaining is the thing, I don’t think there’s anything you can do plastic surgery wise, or augmentation wise, that makes you look better, you can just sort it stay the same, that’s what you can hope for.’ 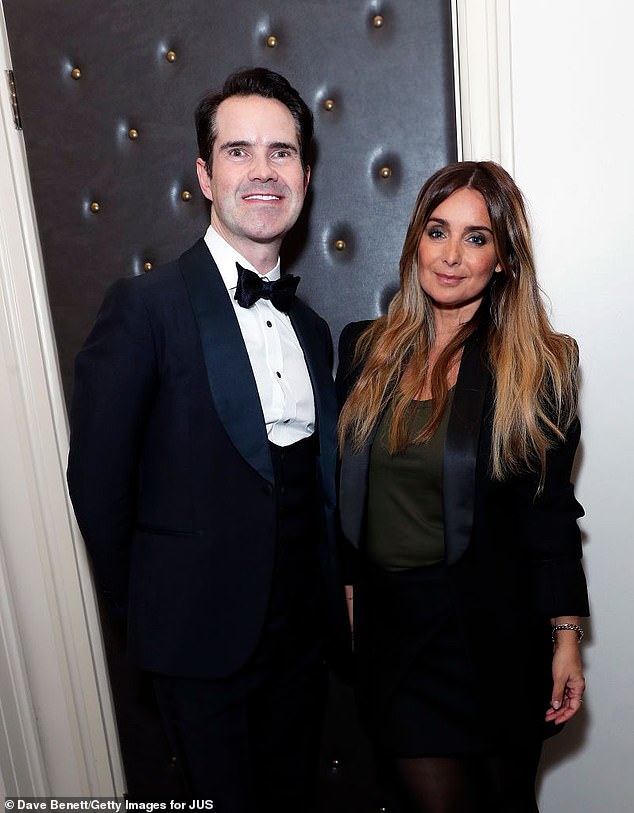 Doing his thing: Jimmy, pictured with Louise Redknapp in January 2020 before he had his work done, said he had ‘more than veneers. I got every tooth in my head done in one sitting’

Police dispatch reveals girl, 6, 'fell out of ride' as it dropped down 110-ft shaft at Colorado park