Jobsworths say it will take SEVEN YEARS and £140m to repair Hammersmith Bridge, but a fix is at hand 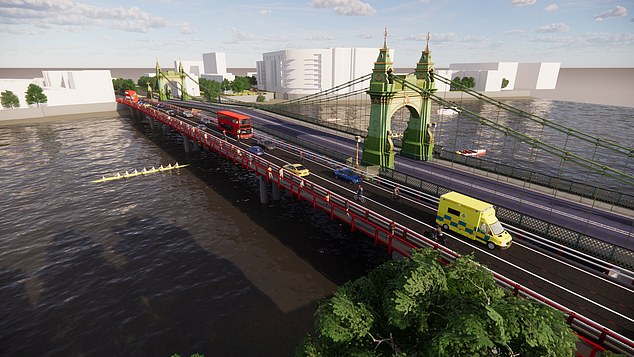 
Night is falling on Chiswick Mall as hundreds of schoolchildren and their parents suddenly encounter a fresh challenge: the route home is now under water.

Ever since the total closure of Hammersmith Bridge three months ago, after years of neglect, life has been increasingly complicated in West London. Many people now have to walk or cycle for miles to find an alternative crossing over the Thames.

And, as they have learned in recent days, there are spells when the adjacent roads and towpaths disappear at high tide.

Clemmie Watkins and Henry Cowell, both 13, bravely try their luck, pedalling headlong into the filthy brown water, dodging driftwood and a floating rubbish bag before riding on into the night. Moments later, Maya, ten, and Lewis, six, arrive with their mother, Tara.

They have no option but to try the alternative route — via the A4 and the Hogarth roundabout, gateway to the M4. It’s no place for a six-year-old on a bike. But it is better than a flood in the dark…

The saga of Hammersmith Bridge is now much more than a local or even regional failure. The fate of the grand Victorian landmark is international news, mocked by the New York Times as a parable of post-Brexit British uselessness.

Having just been told that the bridge will not be back to normal until — wait for it — 2027, incredulous residents are demanding answers. Why take at least six years to mend what its designer Sir Joseph Bazalgette built in three? How come the repair bill has gone from £40 million to £140 million in a year?

However, there is one short-term quick-fix at hand. It comes courtesy of a London family with a long and distinguished track record in such things.

Revealed: A computer generated plan of the proposed temporary Hammersmith Bridge, alongside the original, which is not set to be back to normal until 2027 as it is repaired

Pictured: Barriers close off the road as work is underway to repair the 133 year old Hammersmith Bridge over the River Thames in west London on November 11

It is a temporary road bridge, one which could be assembled for a tenth of the repair bill (£15 million) in a fraction of the time (three months) — and would soon repay its costs with a small toll. It is designed by the marine engineer Tim Beckett and his team at Beckett Rankine, builders of harbours, bridges and piers from Tyneside to Qatar.

The newly updated computer model (shown here for the first time) involves two lanes of road traffic and a separate cantilevered pedestrian lane. Mr Beckett points out that the prefabricated steel spans are ready to go and would sit on a series of 20 steel piles driven ten metres deep into the bed of the Thames by a floating jack-up rig (at a rate of two piles per day).

A similar bridge has recently carried highway traffic above a huge building site in South London. ‘It’s a quick, technical solution and it allows the engineers to work on the main bridge for as long as it takes,’ he says. Industry experts such as the New Civil Engineer magazine are impressed. But the jobsworths are not.

For the main obstacle to this proposal is not the tide, but naysaying bureaucrats. They have dismissed the scheme, saying that it will end up ‘mired’ in local complaints. Tim Beckett simply replies that hundreds of thousands of people are now ‘mired’ in the worst congestion in living memory.

His family firm has form in this regard. You’ll find Tim’s father, the late Allan Beckett, immortalised in bronze above the Normandy beaches in Arromanches, where the French credit him with one of history’s great triumphs. In 1944, it was the vast floating harbour — codename: Mulberry — which stopped the D-Day invasion being driven back into the sea.

And it was Major Allan Beckett of the Royal Engineers — and his invention of the ‘kite’ anchor — that meant the entire venture survived the storms of June 1944.

In other words, the Beckett plan has to be worth a proper look. The Mail has learned that Secretary of State for Transport Grant Shapps has stepped in personally.

Hammersmith Bridge is a study in civic incompetence going back years. Road traffic was stopped last year following cracks in the ironwork. The discovery of much bigger cracks this August set off instant alarm bells.

Overnight, all movement over or under the bridge was banned for fear of imminent collapse. For the first time since the Great Freeze of 1814, the upper Thames is now sealed off from the sea. Right now, the Varsity Boat Race would be illegal.

After weeks of dithering by the three local authorities involved, the Transport Secretary announced that a national ‘task force’ would take charge. The argument is no longer about who is to blame but about what happens next. We are told that, come spring, there will be a ferry service between Hammersmith to the north and Barnes to the south.

Pictured, left to right: Clemmie (13), Lewis (6) and Maya (10) stopped at the flooded section of Chiswick Mall in West London where they are forced to turn around and travel along the A4

Local councillors also want the Government to fund a new footbridge. This would cost much the same as Mr Beckett’s road bridge, could take longer to build and will not alleviate congestion elsewhere. Fewer cars in Hammersmith simply increases pollution in Chiswick, Putney and Fulham.

Task force officials have suggested that, in a year or two, pedestrians may be allowed back on the existing bridge, even as repairs continue.

The locals are open to any solution, as long as it’s quick. ‘The first iron bridge in the world was built in this country,’ sighs Peter Snow, ‘and look where we are now.’

The historian and broadcaster, who lives south of the river, explains that the regular routines of thousands of people — going to school, going to the doctor, going to work — now require militarystyle planning.

He wants to see a ferry as quickly as possible, pointing to a clever plan for a floating platform shuttling between two floating piers.

What used to be a 200-yard walk across the Thames has become a five-mile round trip. Buses are slow and, thanks to the pandemic, seating is reduced.

‘I can stand by the bridge and look across at my doctor on the opposite bank. But just you try getting there,’ says Muriel Seaman, 92, who lives in Barnes with husband Joe, 96, a Fleet Air Arm war veteran. They regard themselves as lucky. ‘Think of those on their own, cut off from friends and family,’ she says. ‘Some will have popped their clogs by the time this bridge is mended.’

Video footage of the latest meeting between all the key ‘stakeholders’ is a heart-sinker. The bridge belongs to the Labour-run Borough of Hammersmith & Fulham which, having failed to maintain it, says it cannot afford to repair it.

Most of the 16,000 pedestrians and 24,000 bus passengers who depend on it are from the borough of Richmond. Three years ago, Richmond council even offered to buy it for a pound (Hammersmith did not respond), but it certainly doesn’t want it now.

The bridge is also the main daily route into town for 22,000 vehicles from all over the south. Keeping the capital moving is the job of Transport for London and the city’s Labour Mayor, Sadiq Khan.

All of the above say they are skint (though Hammersmith council has managed to lend many millions to other councils over the past two years). All insist that the British taxpayer must solve this problem.

At the public meeting, it fell to the Tory Transport Minister, Baroness Vere, to remind them that if they want a bail-out, they will all have to make a contribution — and be less obstructive. Let’s hope so. For most of this long meeting consisted of officials listing all the things that cannot be done.

Allan H Beckett, pictured in 1945, is immortalised in bronze above the Normandy beaches in Arromanches

Residents were told that the old bridge cannot be replaced, for fear of the ‘heritage lobby’. The councils can’t install winter lighting along muddy towpaths because it will upset bats. Hammersmith can’t pay for a ferry because it is already funding bridge security, and so on.

The most telling moment, however, was when residents asked about the Beckett Rankine plan for a temporary road bridge. Cue much shaking of heads. The leader of Richmond council, Gareth Roberts, said it was ‘chasing rainbows’ and would invite Extinction Rebellion protests.

The senior task force civil servant warned that a feasibility study would somehow cost a whopping £500,000. Here was an inertia masterclass straight out of Yes Minister.

But the tide could be turning. The Tory candidate for Mayor of London, Shaun Bailey, tells me that, if elected, he will ‘make it a priority to build a temporary road bridge’.

I now learn that the Tory MP for neighbouring Chelsea and Fulham, Greg Hands, a keen fan of the scheme, convened a top-level meeting last week with Transport Secretary Grant Shapps and senior officials to hear the Beckett plan in full.

The contents of the meeting remain private, though Mr Hands tells me it was ‘very constructive’. But Hammersmith still insists that Tim Beckett’s plan is not an option.

However, Richmond’s Gareth Roberts tells me that, while he is not a fan of the scheme, he would not stand in its way. As for the alleged £500,000 cost of a feasibility study, one expert calls that figure ‘bonkers’.

I’d say the odds are still against Mr Beckett’s scheme. But at least it is now a runner. And if ministers need convincing, they should take just a short walk from Hammersmith to the Hogarth roundabout.

There, they’ll see a famous flyover on steel stilts which merges traffic from the M3 with that from the M4. It was meant to be only a temporary fix back in 1968 but is still going strong. Its designer: Allan Beckett.

On engineering matters, who would you trust? The Becketts — or the officials who let Hammersmith Bridge fall apart in the first place?