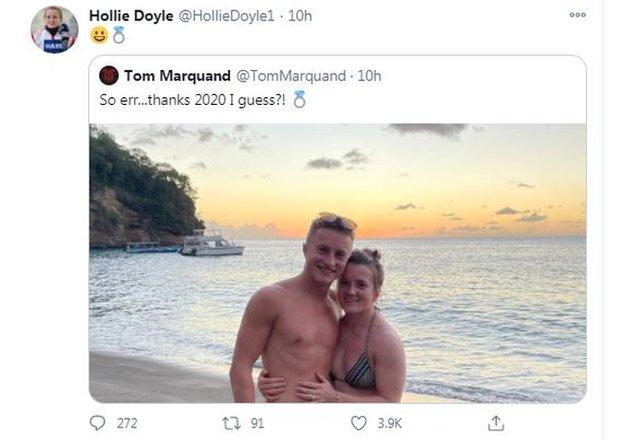 Jockeys Tom Marquand and Hollie Doyle have announced their engagement.

The couple shared the news on social media just before midnight on New Year’s Eve after a 2020 when they both reached new landmarks.

Marquand was third in the flat jockeys’ title race, one ahead of his partner, and won the St Leger on Galileo Chrome.

Doyle, 24, was the first woman to ride five winners at one meeting and was third at December’s BBC Sports Personality of the Year.

Marquand, 22, posted a picture of the pair on a beach with Doyle wearing her engagement ring.

The couple, who met at pony camp around 10 years ago and now live together in Lambourn, Berkshire, both celebrated their first victories at Royal Ascot and had doubles on British Champions Day.

While Marquand, who grew up near Cheltenham, rode more winners during the title race period, Herefordshire-born Doyle had three more victories across 2020.

The tally of 151 beat her own record for the number of winners ridden by a British woman in a year and she won the Sunday Times Sportswoman of the Year award.

Turkey records 15 new cases of corona among expatriates from Britain

Pictures ... Crowds fill the streets of Wuhan, China, the first epicenter of the Corona outbreak, to celebrate the New Year

The conclusion of the Palestinian dialogue sessions in Cairo