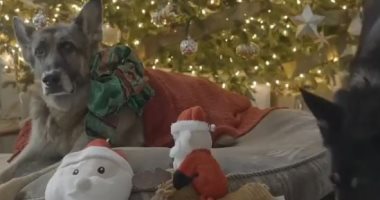 
US President-elect Joe Biden celebrated the “Christmas” birthdays, where his fans and followers shared a video clip through his official account on the social networking site “Twitter”, in which his dogs appeared (Major) And the(Champ(During their Christmas celebration, Biden commented on the video saying, “No matter how you celebrate this year, he wishes you)Major) And the(Champ) Happy birthday. “

Video footage released by the US president-elect showed his two dogs called (Major) And the(ChampThey celebrate Christmas, and play at home and near them, dolls for “Santa Claus”, and the video witnessed a great interaction between his followers and supporters on Twitter.

No matter how you’re celebrating this year, Champ and Major wish you a Merry Christmas. pic.twitter.com/SrZBT4vmpP

The Christmas celebrations this year come in light of the new Corona virus (Covid 19) pandemic in many countries, especially the United States of America, where the virus has spread widely.

Earlier, US President-elect Joe Biden said that the coronavirus pandemic is likely to get worse despite the arrival of vaccines, and urged Americans to be vigilant in the coming months, and also changed plans to celebrate Christmas due to the epidemic.

Biden told reporters, “Experts say things will get worse despite the vaccine. We are reporting an average death rate of nearly 3,000 people per day. This means that we will lose tens of thousands of lives in months and the vaccine will not be able to stop that.” “So we still have to be vigilant,” calling on Americans to wear masks, adhere to social distancing and avoid large gatherings.

His remarks on Tuesday come days before the Christmas break, which will look very different to many Americans this year amid the pandemic.

Biden stated the adjustments he made to his holiday celebrations, indicating that he would celebrate the holiday on a smaller scale, saying, “For the Biden family, we usually have 20 to 25 family members for Christmas dinner, then the immediate family, 14 of our children, grandchildren and their spouses to come down. Stairs on Christmas Morning, but not this year. ”Like we did during Thanksgiving, we all have to care enough for each other that we have to stay apart for a little longer. I know it’s tough, but we still have a long way to go. .

Scottish Prime Minister after the Brexit agreement: It is time to become an independent European country