With Joe Biden set to be sworn in as the 46th President next Wednesday, Americans are uncovering new details about the 78-year-old’s ancestry.

The President-elect makes frequent reference to his Irish forebears, but there is now fervent interest in a speech he made back in 2013, in which he claimed he had familial connections in India.

‘In the 1970s, I received a letter from a gentleman [with the surname] Biden from Mumbai, asserting that we were related,’ he stated in the 2013 speech, delivered during a trip to the country.

Biden later claimed that the mutual relative’s name was George Biden, but records of such a person do not appear to exist.

Instead, Tim Willasey-Wilsey, a visiting professor of War Studies at King’s College, London, says it is more likely that the President-elect was related to Christopher Biden, who worked for the East India Company. 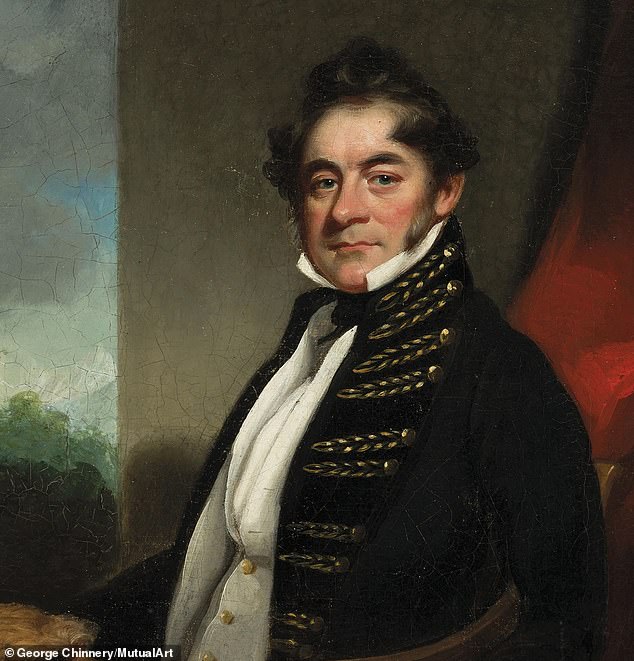 One scholar says it is possible that the President-elect was related to Captain Christopher Biden, who worked for the East India Company. His portrait is seen above 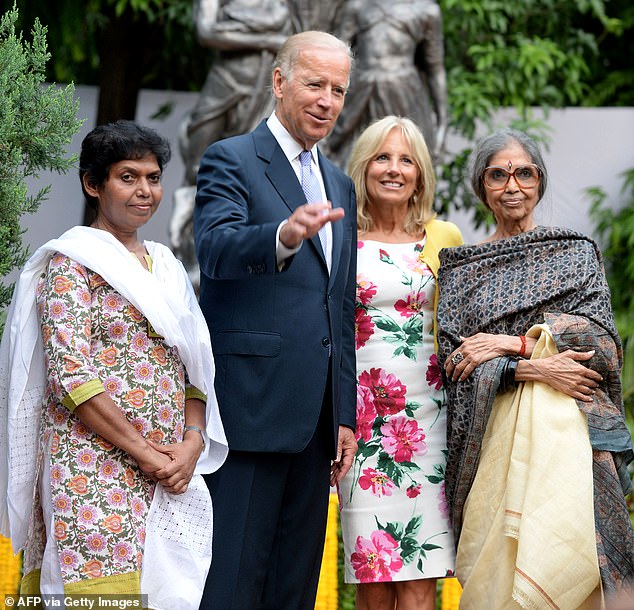 If true, it would mean both Biden and Vice President-elect Kamala Harris both have ties to India, as Harris’ late mother was born in the South Asian nation.

But as The Times reports, the President-elect’s possible relative and Harris’ family would have had very different experiences of life in the city.

According to the paper: ‘Harris describes her Indian grandfather as “one of the original independence fighters in India”. Biden’s ancestors, however, stand on the opposite side of history, not as victims of empire but as British Empire-builders.’

They further claim Biden has a ‘problematic legacy’ given his potential ties to the East India Trading Company.

By the beginning of the 1800s, around the time Christopher Biden was born, ‘the East India Company had conquered, subjugated and plundered vast areas of south Asia… ruling most of India’. 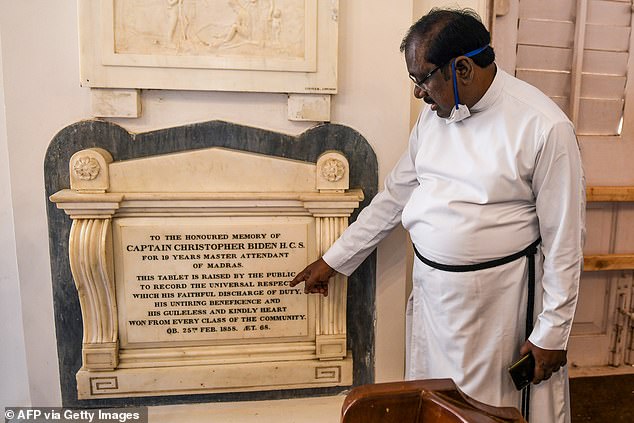 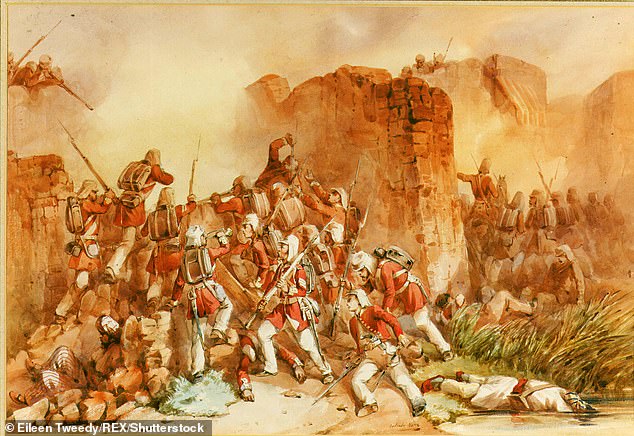 A painting showing the British attacking an Indian stronghold during the Indian Mutiny, 1857-58

According to Willasey-Wilsey, Christopher Biden became captain of an East India Company armed merchant ship named the Princess Charlotte of Wales in 1821.

He married a woman by the name of Harriet Freeth in his native England, before they had three children.

The pair eventually settled in Madras, India in 1839, where Christopher Biden became a master attendant and marine storekeeper. 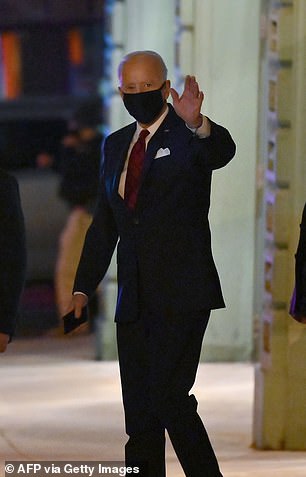 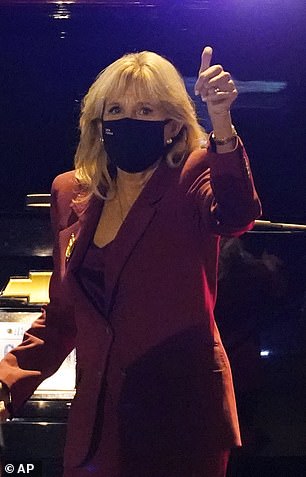 US President-elect Joe Biden and wife Jill are seen above at The Queen theater in Wilmington, Delaware on Friday night

Despite working for the East India Company – which was responsible for colonizing and subjugating the local population – Christopher was reported to be well liked among the community.

The Times reports that between 1839 and 1857,  ‘Christopher earned a reputation for charitable works, setting up the Biden Home for Destitute Seamen and working to improve marine safety by erecting lighthouses along the Madras coast.’ 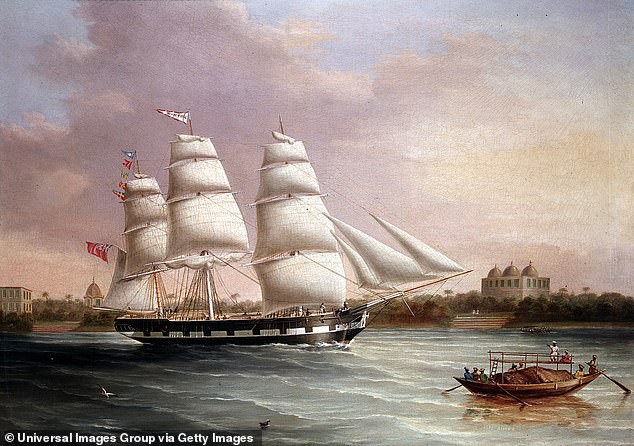 A painting by John Wood, created in 1850, titled ‘Approaching Bombay’. At this time the East India Company was still governing India 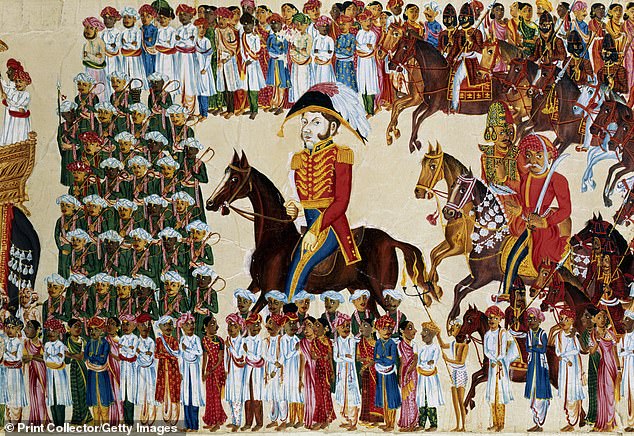 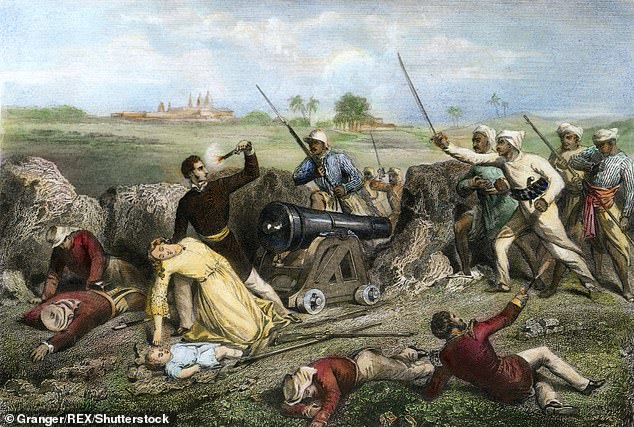 A painting depicting a battle during the Indian Mutiny in 1857

However, tensions between British settlers and locals were increasing during Christopher Biden’s days living in Madras, leading to the Indian Mutiny of 1857.

Christopher died the following year, with The Times reporting he may have been killed in the uprising by a ‘band of fanatics’.

Christopher’s daughter remained living in India, but it is unknown whether she married and had children. His sons purportedly returned to England.

The Times claims Joe Biden’s ancestry is ‘complex and challenging’ and that Christopher Biden’s life ‘reflects both the lighter and darker sides of the British Empire, a tale of good intentions, big profits and brutal bloodshed.’

WHAT WAS THE INDIAN MUTINY?

The Indian Mutiny, also known as India’s First War of Independence, was an uprising by local soldiers against the ruling British East India Company beginning in 1857.

The Indian rebellion was ‘fed by resentments over invasive British-style social reforms, harsh land taxes, and skepticism about the improvements brought about by British rule.’

In 1857, growing tensions were inflamed by rumors that Indian soldiers’ rifle cartridges were being greased with pig and cow fat, offending Muslims and Hindus alike.

The unrest erupted in May. The city of Delhi soon fell and there were further violent uprisings elsewhere.

As many as 800,000 Indians died both in the rebellion and in famines and epidemics of disease caused in the wake of the mutiny.

The East India Company was subsequently abolished and the government of India transferred to the Crown. 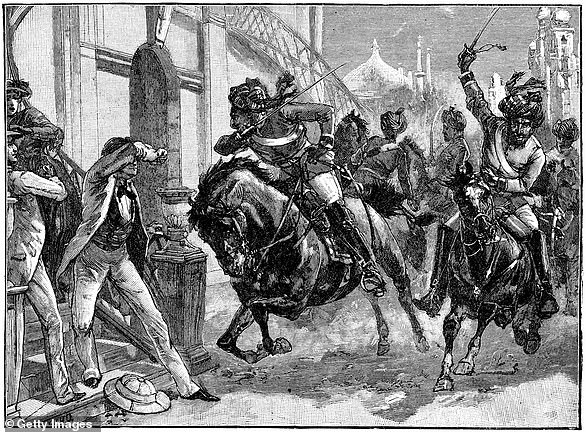