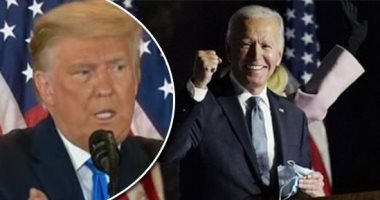 US President-elect Joe Biden declared that “the will of the people has prevailed” in a speech shortly after the Electoral College officially confirmed his victory, sending a decisive message to the outgoing president, Donald Trump, that “it is time to turn the page.” The president-elect said it was “time to turn the page” about the presidential elections that tested the resilience of American democracy, shortly after the completion of the Electoral College vote, ending Trump’s unprecedented attempt to cancel the election results, according to the British newspaper, The Guardian.

Biden hailed the presidential election and its aftermath as a victory for American democracy and “one of the most remarkable manifestations of civic duty that we have seen in our country.”“.

The end result – 306 to 232 electoral votes – followed an unfounded campaign by the president to reverse the results of a historic turnout despite the outbreak of a pandemic. Not only did Trump lose the Electoral College, he also lost the popular vote – with about 7 million votes.

For weeks, however, the president clung to unfounded accusations of voter fraud in a list of crucial states that gave Biden the victory. And his refusal to compromise raised doubts among his supporters about the fairness of the vote and undermined confidence in the institutions of American governance.

In a speech from Wilmington, Delaware, Biden said, “Our democracy – pushed, tested, and threatened – has proven resilient, honest, and strong.”“.

Biden, who will become the forty-sixth president of the United States when he is sworn in on January 20, continued: “We the people voted. The integrity of our elections remains the same. So, now is the time to turn the page, as we have done throughout our history – to unite and recover. “.