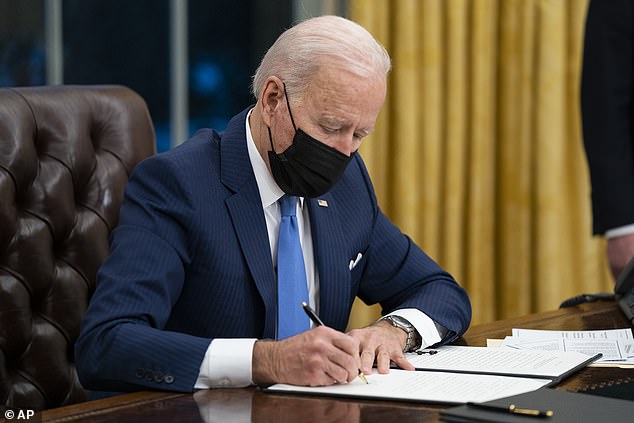 
Joe Biden plans to release an immigration reform bill that would grant path to citizenship to 11 million undocumented immigrants, according to a report Monday.

The president is expected to unveil the U.S. Citizenship Act of 2021 in the coming days, sources have told NBC.

It will reportedly include a pathway to citizenship for millions, an expansion of the refugee resettlement program and more technology at the southern border.

Expanded benefits for DREAMers who came here illegally as children and processing minors’ asylum applications in their home countries are also being considered as part of the bill.

The move is sure to bring a fight with expected pushback from immigration hard-liners. Former Trump administration officials and some within ICE have already objected to Biden’s immigration approach.

Texas and Arizona have also both sued to stop Biden’s 100-day deportation moratorium, which a judge temporarily put on hold.

The Trump administration slashed refugee admissions by more than 85 percent, setting the limit at 15,000 for fiscal year 2021, which started in October. Biden during his campaign vowed to raise that to 125,000 for this year and possibly boost it even higher in subsequent years.

Joe Biden plans to release an immigration reform bill that would grant path to citizenship to 11 million undocumented immigrants, according to a report Monday

Democrat Sen. Robert Menendez said the plan ‘is about fixing our broken immigration system’ but also ‘building a better one that reunites families, brings the undocumented community out of the shadows and on a path to citizenship’.

He said the bill would also ‘stands up for human rights, address the root causes of migration, and includes a smart border security strategy’.

Lora Ries, a senior research fellow at the Heritage Foundation and former acting deputy chief of staff at the Department of Homeland Security under Trump, said in January: ‘Legalizing countless millions of illegal aliens — even discussing it — rings the bell for millions more to illegally enter the U.S. to await their green card.’

United Farm Workers President Teresa Romero told The LA Times: ‘I don’t know that we’re going to get the support of Republicans for an immigration reform [bill] that would cover the 11 million people in this country that don’t have documents.

‘We’re realistic on the challenges we have ahead of us.’

‘Many Republicans are worried about primary challenges,’ Former Rep. Carlos Curbelo, a moderate Republican from Florida said, adding that Trump and his supporters’ championing of immigration crackdowns means there’s ‘political peril there for Republicans.’

Democrats control of the House and Senate is razor thin but, if successful, the legislation would be the biggest move toward granting status to people in the country illegally since President Ronald Reagan bestowed amnesty on nearly three million people in 1986.

Legislative efforts to overhaul immigration policy failed in 2007 and 2013. The Biden administration is said to be open to breaking up the legislation tp avoid it failing.

Migrants walk out of the Rio Bravo river after crossing it to turn themselves in to U.S Border Patrol agents and request for asylum in El Paso, Texas on February 10

Migrants are detained by a U.S. Border Patrol agent as they turn themselves in to request asylum, after crossing into El Paso, Texas, U.S., as seen from Ciudad Juarez, Mexico February 9

The Biden administration has already signed several executive orders on immigration, including allowing in more refugees and establishing a task force to find the parents of about 600 children who were separated under Trump and still haven’t been reunited.

But it hasn’t ended a public health order Trump issued at the start of the coronavirus pandemic that allows U.S. Customs and Border Protection to immediately expel nearly everyone, including asylum-seekers.

Press secretary Jen Psaki said the government is still working to develop a ‘humane, comprehensive process’ to evaluate people coming to the U.S.

‘Asylum processes at the border will not occur immediately,’ she said. ‘It will take time to implement.’

While Biden has taken some major steps in his first weeks in office to reverse Trump’s hardline immigration policies, his administration hasn’t lifted some of the most significant barriers to asylum-seekers.

In fact, it’s discouraging people from coming to the country, hoping to avoid what happened under both Trump and former President Barack Obama — border agents getting overwhelmed by migrants, including many Central Americans with children.

‘Now is not the time to come,’ White House press secretary Jen Psaki said at a recent briefing, ‘and the vast majority of people will be turned away.’

DACA students rally in front of the Supreme Court, Thursday, June 18, 2020, in Washington

Secretary of State Antony Blinken struck a similar tone on February 6 as he announced official steps to end Trump-era agreements with Honduras, El Salvador and Guatemala that required many asylum-seekers to seek refuge in one of those countries instead of the U.S.

‘To be clear, these actions do not mean that the U.S. border is open,’ Blinken said.

‘While we are committed to expanding legal pathways for protection and opportunity here and in the region, the United States is a country with borders and laws that must be enforced.’

It is impossible to know precisely how many people are in the country illegally. Pew Research Center estimates there were 10.5 million in 2017, down from an all-time high of 12.2 million in 2007.

The Homeland Security Department estimates there were 12 million people in the country illegally in 2015, nearly 80% of them for more than 10 years. More than half were Mexican.