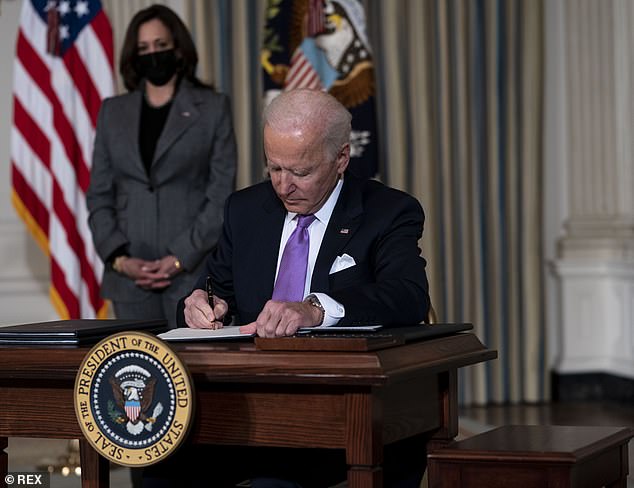 President Joe Biden will sign a host of climate initiatives on Wednesday, which include ending drilling on federal land and doubling wind energy after he canceled the controversial Keystone XL pipeline.

The orders will kick off his drive to combat climate change, an issue area young Democratic voters pressed him on during the presidential campaign.

Among the provisions in the executive order is a directive to the secretary of the Interior to pause new oil and natural gas leases on federal lands or offshore waters. It also directs the secretary to double renewable energy production from offshore wind by 2030.

The orders also direct the government to conserve 30 percent of all federal land and water by 2030, to create a National Climate Task Force to assemble a government-wide action plan for reducing greenhouse gas emissions, establishes a White House interagency council on environmental justice, and makes climate change a national security priority.

It will also strengthen measures to protect poor and minority neighborhoods from pollution.

Biden will also direct federal agencies to ‘eliminate fossil fuel subsidies as consistent with applicable law’, according to a White House fact sheet. It’s unclear which subsidies will be affected as many of the tax breaks were done through Congress.

Biden is focusing attention on how the poorest communities are often hardest hit by environmental issues from industry, landfill or climate change

‘These Executive Orders follow through on President Biden’s promise to take aggressive action to tackle climate change,’ said a White House fact sheet on the orders.

Biden already has taken a series of actions to combat climate change – a dramatic reversal from the policies under former President Donald Trump.

On his first day as president, he signed the papers for the United States to rejoin the Paris Climate Accord after Trump removed the country from the climate agreement.

Biden also created a climate czar position – adding it to the National Security Council – that is held by John Kerry. Kerry and National Climate Advisor Gina McCarthy will join Wednesday’s press briefing at the White House to discuss the new federal orders.

Biden created a new position of climate czar, which he appointed John Kerry to

The orders are meant to fulfill Biden’s campaign promise to achieve a carbon pollution-free power sector by 2035 and puts the United States on an irreversible path to a net-zero economy by 2050.

Biden stopped short of endorsing the controversial Green New Deal – a set of progressive ideas that called for trillions of dollars in spending on green initiatives and for the elimination of greenhouse gas pollution by 2015.

Instead, he came with his own plan – a more central approach that had some liberals grumbling it wasn’t enough while garnering fire from the oil and gas industry, who complained his plan would result in lost jobs and revenue.

He brought his climate team in the administration, although he did nominate Rep. Deb Haaland to lead the Interior Department. She was a co-sponsor of Rep. Alexandria Ocasio Cortez’s Green New Deal.

Biden’s campaign climate plan infuriated the oil industry and became a battle cry in the key swing state of Pennsylvania, where fracking is a major industry. Biden ultimately won the state but Donald Trump repeatedly criticized him on the issue during the campaign in one of his more effective tactics against Biden.

Wednesday’s plan does not ban fracking but does halt any new leases. Federal land accounts for less than a quarter of total U.S. oil production and much less for natural gas.

‘We will do everything we can to fight this executive order,’ Mike Sommers, the CEO of the American Petroleum Institute, told CNN Business on Tuesday. ‘We will pursue every action at our disposal to push back, including legal options, if appropriate.’

The top three House Republicans, joined by 17 others, sent a letter to Biden on Tuesday warning him against suspending federal oil and gas auctions.

Taking such a step ‘would be as extreme as it is radical, and it would only further divide the country. It would put Americans with good-paying jobs in the energy industry out of work. And, it would seem to conflict directly with federal law.’