Joe Biden tells Congress he ‘inherited a nation in crisis’


President Joe Biden delivered his first address to a joint meeting of Congress Wednesday night – as he pitched his economic plan took a dig at Wall Street and invoked the Jan. 6th riot to level criticism at former President Donald Trump.

‘Look, I’m not out to punish anyone. But I will not add to the tax burden of the middle class of this country,’ Biden said.

Biden said 650 billionaires in the nation saw their net worth increase by a collective $1 trillion during the pandemic.

‘My fellow Americans, trickle-down economics has never worked. It’s time to grow the economy from the bottom up and middle-out,’ he said.

Biden entered the chamber wearing a black face mask – in yet another demonstration the coronavirus and its impact on his term.

Speaking just before his 100th day in office in a tenure upended by the coronavirus, Biden pointed to his efforts on the coronavirus vaccine and declared the nation ‘on the move.’

President Joe Biden delivered his first speech to a joint meeting of Congress. He pitched his jobs plan as ‘a blue-collar blueprint to build America’

Drawing from some of his emotional and homespun campaign rhetoric, Biden called for ‘choosing hope over fear, truth over lies and light over darkness.’

‘We all know life can knock us down. But in America, we never ever stay down,’ Biden said.

‘America is ready for a takeoff,’ Biden said – reeling out metaphors having witnessed multiple presidential speeches to Congress in his four decades in the Senate.

‘Good to be back,’ he said as he began his remarks, seeking to establish a bond with his audience. ‘Good to be almost home – down the hall,’ in reference to his old stomping ground.

Despite the diminished crowd, Biden was applauded for about a minute.

The event had many of the trappings of a typical State of the Union Speech – although the far smaller group of lawmakers were spaced four seats apart. The lawmakers gathered in the same House chamber penetrated during the Capitol riot.

There were historic firsts – such as having the nation’s first female vice president seated next to the first female speaker of the House – although Pelosi has presided over plenty of historic speeches, including when she ripped up Donald Trump’s address. Also on display were cliches associated with past State of the Union speeches, including lawmakers glad-handing, and pre-canned rebuttal statements.

Vice President Kamala Harris, who is spearheading Biden’s push to try to head off an immigration crisis, was a frequent presence in the camera shot. Her husband, first gentleman Douglas Emhoff, blew kisses to her while wearing a mask.

Acknowledging he historic pair of Harris and Pelosi, who wore masks throughout his speech, Biden said: ‘No president has ever said those words from this podium … and it’s about time. Madam speaker, madam vice president,’ in a line that drew applause.

First lady Dr. Jill Biden attended and was applauded when she entered the gallery, but without having traditional box of guests to spotlight pet causes. She met with some earlier in the day.

Biden called the MAGA riot ‘the worst attack on our democracy since the Civil War,’ as he sought to rally the nation, reach out to those whose lives have been upended by dislocation, and rally Americans to stick with measures to battle the coronavirus.

Seated inside were many of the power brokers who will determine the fate of his multi-trillion agenda: West Virginia Democratic Sen. Joe Manchin; longtime Biden friend minority leader Mitch McConnell; liberal firebrand Elizabeth Warren. Also there were senators who backed Trump’s effort to overturn election results, including Texas Sen. Ted Cruz, a vocal Biden critic who said in advance of the speech it would be ‘radical’ and ‘boring.’

The dean of the diplomatic corps, from the nation of Palau, was there – but other diplomats stayed home.

As in past years, an official escort committee received applause and a warm welcome as they entered the chamber. Among them were feuding House Minority Leader Kevin McCarthy, and GOP Conference Chair Rep. Liz Cheney, who backed Trump’s second impeachment. 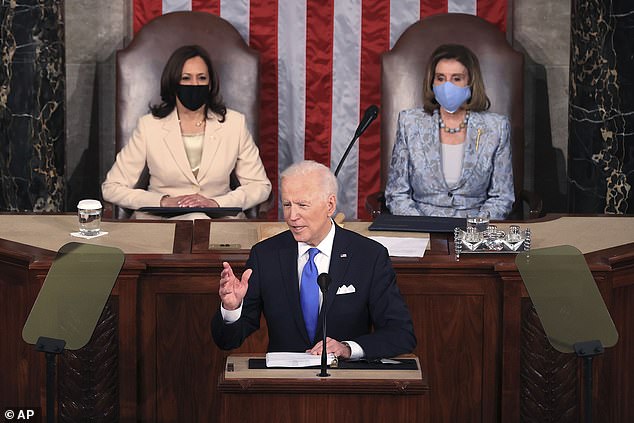 ‘No president has ever said those words from this podium. … and it’s about time. Madam speaker, madam vice president,’ Biden said in reference to Speaker Nancy Pelosi and Vice President Kamala Harris 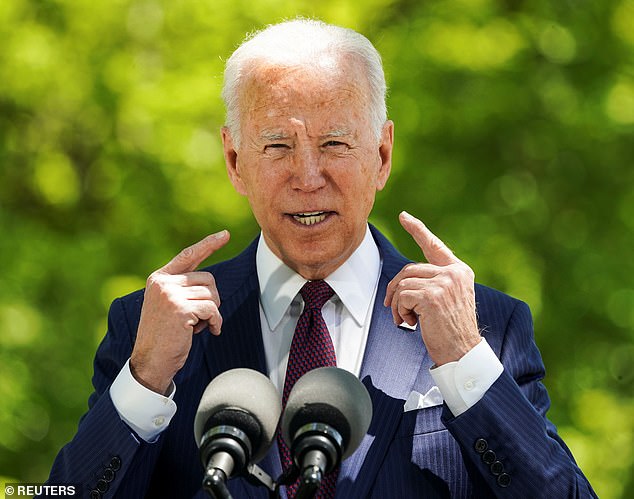 President Joe Biden will reference the Jan. 6th Capitol riot and will call it ‘the worst attack on our democracy since the Civil War’ when he speaks to Congress Wednesday night

‘As I stand here tonight, we are just one day shy of the 100th day of my administration. One hundred days since I took the oath of office—lifted my hand off our family Bible—and inherited a nation in crisis,’ he said.

‘The worst pandemic in a century. The worst economic crisis since the Great Depression,’ he continued. 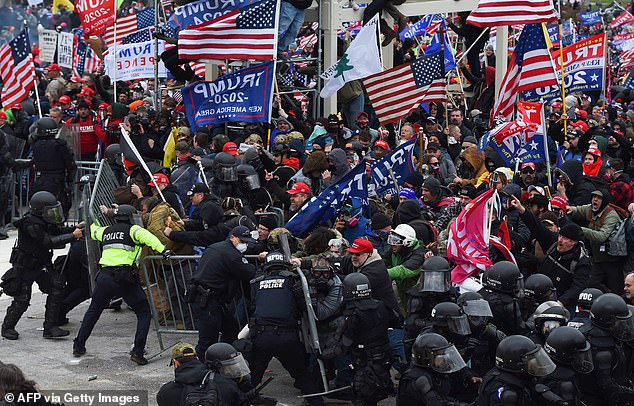 Biden will call the Jan. 6th riot ‘the worst attack on our democracy since the Civil War’ 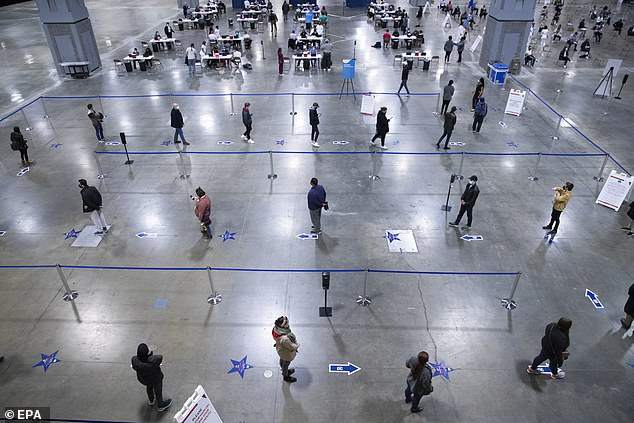 Biden will stress the vaccine rollout in his speech 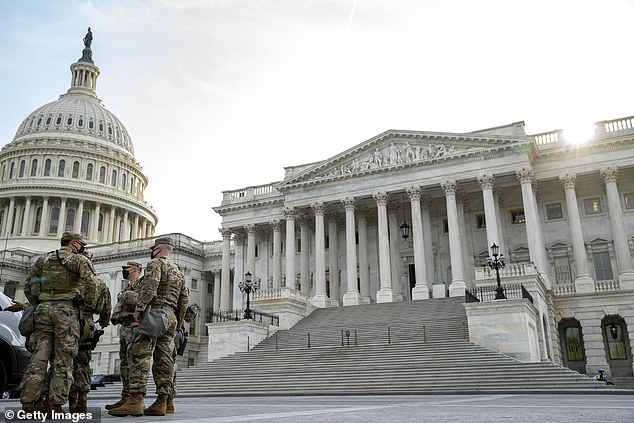 Military personal stage outside the US Capitol before U.S. President Joe Biden will address a joint session of Congress 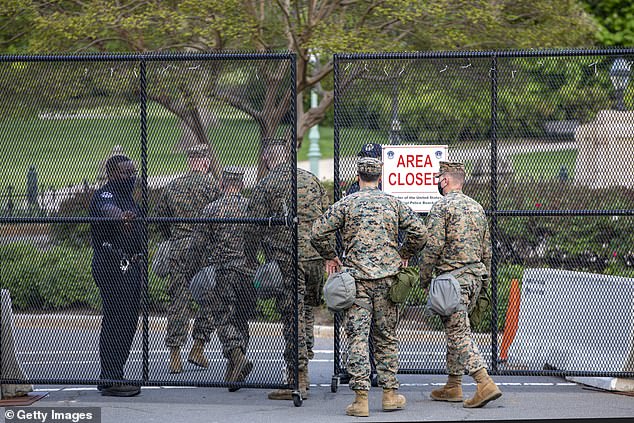 Security barriers were in place once again for the speech 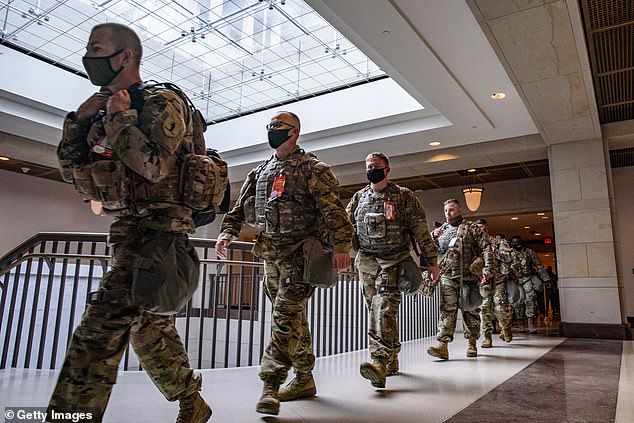 National Guard forces have been protecting the Capitol since the Jan. 6th riot

But after citing the historic challenges, Biden included plenty of optimism.

‘Now—after just 100 days—I can report to the nation: America is on the move again. Turning peril into possibility. Crisis into opportunity. Setback into strength,’ he said.

Tells Americans to get vaccinated and touts his coronavirus efforts

Biden spoke with emotion about Americans lined up for food aid amid the pandemic.

‘One of the defining images of this crisis has been cars lined up for miles waiting for a box of food to be put in the trunk,’ he said.

‘Did you ever think you’d see that in America?’ he asked.

He touted the 220 million shots delivered to Americans in his first 100 days.

Biden’s remarks also included outreach to Americans who may feel ‘left behind’ – outreach to millions who remain unemployed, as well as to potential Donald Trump supporters who have registered complaints about the economic system and job disruptions.

‘Now, I know some of you at home wonder whether these jobs are for you. You feel left behind and forgotten in an economy that’s rapidly changing. Let me speak directly to you,’ Biden will say – pivoting to his multi-trillion proposals.

‘Independent experts estimate the American Jobs Plan will add millions of jobs and trillions of dollars in economic growth for years to come. These are good-paying jobs that can’t be outsourced. Nearly 90% of the infrastructure jobs created in the American Jobs Plan don’t require a college degree. 75% don’t require an associate’s degree,’ he will say.

He called his plan ‘a blue-collar blueprint to build America.’

Call for bipartisanship – within limits

Biden touted his infrastructure plan – which is funded by tax hikes – and acknowledged a group of Republican senators who put out an alternative proposal to his $2.3 trillion effort. Democratic lawmakers blasted it as insufficient but the White House welcomed the plan.

‘Vice President Harris and I meet regularly in the Oval Office with Democrats and Republicans to discuss the American Jobs Plan. And I applaud a group of Republican Senators who just put forward their proposal,’ he said.

‘So, let’s get to work. We welcome ideas. But, the rest of the world isn’t waiting for us. Doing nothing is not an option,’ he said – dangling an implied threat to find ways to overcome Republican opposition. That could include using special budget rules to enact his passage on a simple majority vote.

Biden called on Congress to pass the George Floyd Justice in Policing Act by next month.

‘By the first anniversary of George Floyd’s death,’ the president said.

The act is currently stuck in the Senate with Sen. Tim Scott, tasked with rebutting Biden tonight for the Republican Party, leading negotiations for the GOP. Sen. Cory Booker is negotiating on behalf of the Democrats.

‘I know the Republicans have their own ideas and are engaged in productive discussions with Democrats,’ Biden said.

But he told his audience, ‘Now is our opportunity to make real progress.’

‘My fellow Americans, we have to come together. To rebuild trust between law enforcement and the people they serve. To root out systemic racism in our criminal justice system. And to enact police reform in George Floyd’s name that passed the House already,’ Biden encouraged.

‘As I knelt down to talk to her so we could talk eye—to—eye, she said to me, “Daddy changed the world,”‘ he said. ‘After the conviction of George Floyd’s murderer, we can see how right she was – if we have the courage to act.’

‘We have to prove democracy still works. That our government still works—and can deliver for the people. In our first 100 days together, we have acted to restore the people’s faith in our democracy to deliver,’ he said in remarks released by the White House.

And pushed his main focus: beating back the virus through vaccine and other means.

‘We’re vaccinating the nation. We’re creating hundreds of thousands of jobs. We’re delivering real results people can see and feel in their own lives. Opening the doors of opportunity. Guaranteeing fairness and justice.’

‘There’s still more work to do to beat this virus. We can’t let our guard down,’ he said.

In his Republican response, Sen. Tim Scott of South Carolina will credit President Trump for the vaccines.

‘This Administration inherited a tide that had already turned. The coronavirus is on the run!’ scott will say.

‘Thanks to Operation Warp Speed and the Trump Administration, our country is flooded with safe and effective vaccines. Thanks to our bipartisan work last year, job openings are rebounding,’ he will say.

Biden took the Oath of Office Jan. 20th after 400,000 Americans had died from the virus. Vaccines were beginning to come online, with Pfizer and Moderna shots getting out of the gate first. The country was just days past a post-Christmas spike, with nearly 200,000 new infections per day, in what was the high point of the pandemic. On Tuesday there were just over 50,000 new cases.

Seven Italians convicted of left-wing terrorism are arrested in France

REVEALED: The very simple trick for scoring massive discounts on your supermarket shop EVERY time

REVEALED: The very simple trick for scoring massive discounts on your supermarket shop EVERY time