Joe Rogan has backtracked his comments telling young adults not to get the COVID-19 vaccine on his hugely popular podcast show by telling his fans he is ‘not a respected source of information.’

The former Fear Factor host, 53, had said on an episode last week of The Joe Rogan Experience – the most popular podcast in the world on Spotify – that young adults should not get the vaccine.

The hit podcaster has now released a new episode walking back his prior comments about the vaccine after the backlash from Fauci and revealed that he was scheduled to get the Johnson & Johnson vaccine before it was paused by the CDC. 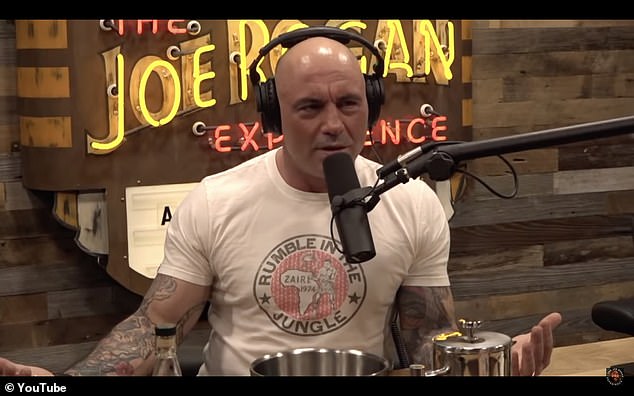 ‘It’s not being a sheep, there’s some legitimate science behind it. I just said that I don’t think that if you’re a young healthy person, that you need it,’ Rogan said on Thursday to his guest, comedian Andrew Santino.

‘This is the thing about this whole thing about people being upset about me. I’m not an anti-vax person, in fact, I said I believe they’re safe and I encourage many people to take them. My parents were vaccinated.’

He continued: ‘Their argument was, you need it for other people. That’s a different argument.’

Rogan added that his comments are ‘not planned’ after discussing the vitamins and medications he takes, including testosterone therapy.

‘When I say something stupid, I’m not thinking about what I’m going to say before I say it. I’m just saying it,’ Rogan said.

‘If someone said, “Yeah, young healthy 21-year-old people who eat well and exercise are not at high risk of coronavirus but you should think about other people” then I would say, well that’s a different argument and yes, that makes sense.’

Rogan then complained about journalists who had reported on his comments, condemning the news as ‘headlines’ and ‘clickbait.’

‘The problem is today, everything is all headlines and and highlights and its all clickbait, which is fine. That’s the business. I have a deep respect for real journalism. I love Glenn Greenwald and Matt Taibbi and people that stick their f**king neck out and do real journalism,’ Rogan said.

‘But there’s a lot of people out there that have to make a f**king living. And what’s the best way to make a living, well here’s one way: take a jacka** like me and go over their podcast – go over this three hour drunken, ridiculous podcast.’

Rogan continued: ‘A lot of times we’re drinking or are high, and we say stupid sh*t. I get that. If you mine that and make money off that, more power to you. I don’t care.’

Rogan, who has also worked as a longtime UFC interviewer and color commentator, said he was scheduled to get the J&J shot as a UFC employee before it was paused.

‘I was going to get the vaccine, I was scheduled to get the Johnson & Johnson vaccine. The UFC had allocated a certain amount of vaccines for all their employees,’ he said.

Rogan then said he could not get the vaccine because the J&J shot was pulled.

‘I’m not a doctor, I’m a f**king moron, and I’m a cage-fighting commentator who is a dirty stand-up comedian. I’m drunk most of the time, and I do testosterone and I smoke a lot of weed,’ he said.

‘But if you’re like 21 years old, and you say to me, should I get vaccinated? I’ll go no. Are you healthy? Are you a healthy person?’

Joe Rogan and his past controversies

Joe Rogan, who has often backed libertarian candidates for office, has often faced controversies for his at-times shocking commentary.

Rogan has used the full ‘n****r’ enough times on his show, typically when quoting others who have used it, that compilations have been created online showing him using the racial slur.

He has also hosted a number of guests on his show that have proved controversial, particularly conspiracy theorist Alex Jones of InfoWars.

Jones had been banned by Spotify from appearing in content on the platform for creating ‘hate content’ but Rogan interviewed him anyway and uploaded the interview to Spotify – earning swift backlash for letting him spread misinformation.

Rogan’s brand often rejects ‘political correctness’ as he slams ‘cancel culture’ but his comments and those from his guests have received criticism for transphobia and Islamophobia.

He had once called MMA fighter Fallon Fox ‘a f**king man’ after she had transitioned in 2006, Bleacher Report noted.

Proud Boys founder Gavin McInnes once appeared on Rogan’s show where he argued that people who are Muslim are inbred. Rogan has also defended McInnes and the Proud Boys in a number of episodes.

Is the program that guarantees flights to small communities really working? Ask the Captain