Echoed in both their faces are their famous father’s features: that aquiline nose, the long face, the high forehead.

But Julian and Sean Lennon also share something far more special — a true feeling of brotherhood, at last.

The half-brothers, aged 58 and 46 respectively, are on a road trip in California. Posting a snap on Instagram yesterday, Julian wrote: ‘A lil bit wind blown and tired after a few hours driving through the mountains to the sea but so worth it. A magical day.’

It is too, for their trip along the Pacific Coast Highway is a bit of rock history and a healing moment dubbed ‘life changing’ by Julian.

For Julian is finally making peace with the partial estrangement from his father before his death. And it seems his friendship with Sean is going some way to provide the paternal relationship that both men have missed so deeply.

As Julian says, Sean is ‘the one person I care about more than anything in the world . . . I’m here to love and support you, ’til the end of time and then some.’

It wasn’t always the case. John’s bitter divorce from Julian’s mum Cynthia, and marriage to Sean’s mother Yoko, led to strained relationships. Then, after John’s murder in 1980, there were decades of mistrust — plus a dispute over John’s £250 million legacy.

Yet, very quietly followed an outbreak of peace, which has matured into a close and meaningful bond. 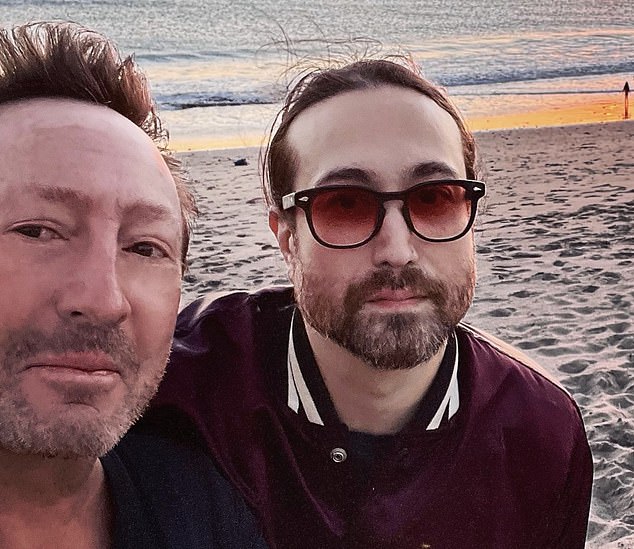 A mutual friend told me yesterday: ‘They have been friends for about 20 years, but are growing closer as time passes.

‘People talk about them as if they were enemies, and there was a lot of pain, and a lot of that was very public, but not any more.

‘Yoko said to me about ten years ago: ‘You know that we are a family with Julian, and sometimes families have disagreements.’

‘Julian and Sean have always had a bond outside of all of that. They love each other.’

The public chapter of this brotherly reunion started on Friday, at the LA launch of the Disney+ three-part documentary, The Beatles: Get Back.

They sat next to each other at the screening and, afterwards, mingled at a party thrown by Sir Paul McCartney’s daughter Stella.

Julian wrote that night: ‘The One True thing I can say about it all is that it has made me feel so proud, inspired & feel more love for My/Our family than ever before. And the film has made me love our father again in a way I can’t fully describe. Life changing.’

Julian, who has never married, lives in Monaco, while Sean is based in New York with his model girlfriend Kemp Muhl.

Their last public meeting came when the two men recorded a conversation together in October 2020 for the BBC, to mark what would have been John Lennon’s 80th birthday. They reminisced, though some memories were maybe too raw to share.

Like how Julian taught Sean to play guitar to George Michael’s Faith, and was so much Sean’s ‘hero’ that Yoko flew 17-year-old Julian out to New York in 1980 to break the news of John’s death to the then five-year-old Sean. 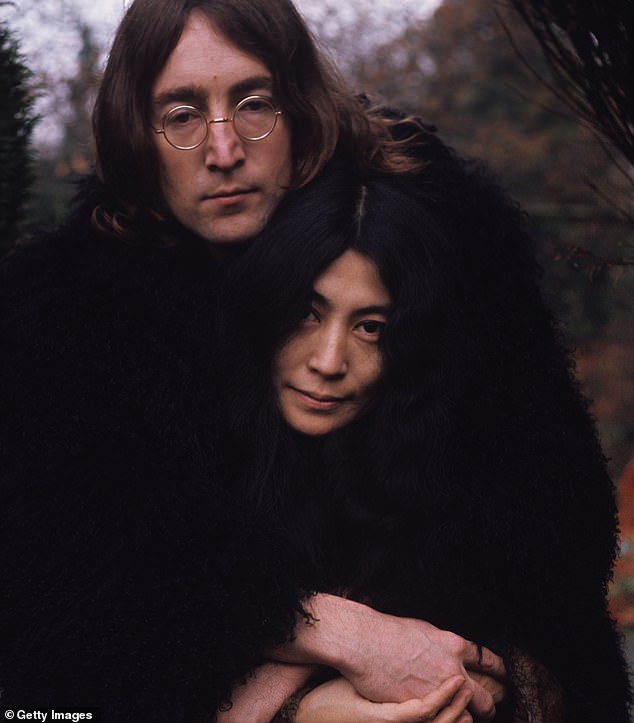 Like how baby Julian’s existence had been hidden at the behest of Beatles manager Brian Epstein.

Art student Cynthia and baby Julian, born at the start of Beatlemania in 1963, lived in obscurity as John toured the world. His secret family first came to light in 1966 when Cynthia was photographed pushing a pram. Months later, the marriage was doomed when John met Yoko Ono at an art show.

He moved to New York with Yoko when Julian was just five years old and made a cruelly distant parent. Birthday and Christmas presents were dispatched, unseen by him, from The Beatles’ London office.

Julian was taunted at school for having ‘walls papered with £5 notes’ but, in fact, he and Cynthia had no material wealth, and he had next to no contact with John.

When he was 11, Julian was sent to New York for a few, awkward meetings — Julian estimates he saw his father ten times in all.

‘I lived from birthdays to Christmas, just to be with him,’ he said.

The visits themselves were filled with erratic incidents. Once, John scolded Julian, telling him not to laugh so loudly as he might wake baby Sean. Another time, he offered him a joint. 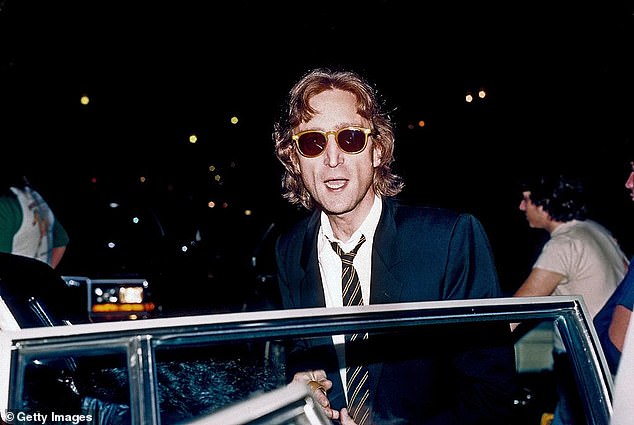 John was besotted with Sean and had given up working, in order to be a father

Painfully, John was besotted with Sean and had given up working, in order to be a father. Julian said: ‘When I saw the fact that, you know, he’d basically given up music for a couple of years to look after Sean, you know, that was — it was hurtful. I thought, “Well, why didn’t he do that for me?” I was a bit jealous, but I never said anything.’

In another interview, he said he was angry about the neglect. ‘I felt he was a hypocrite. Dad could talk about peace and love to the world, but that peace and love never came home to me.’

In 1980, John was gunned down by Mark Chapman. It was a shattering blow.

Julian was put on Concorde to New York. There, he found Yoko’s grief hard to handle. She had wanted to wait until Julian arrived to tell Sean about John’s death, and she wanted Julian’s advice on breaking the news.

Over and over, they rehearsed what Yoko would say. ‘I remember seeing the glint in Sean’s eye, when he actually understood what had happened. And then the tears started rolling,’ he said. 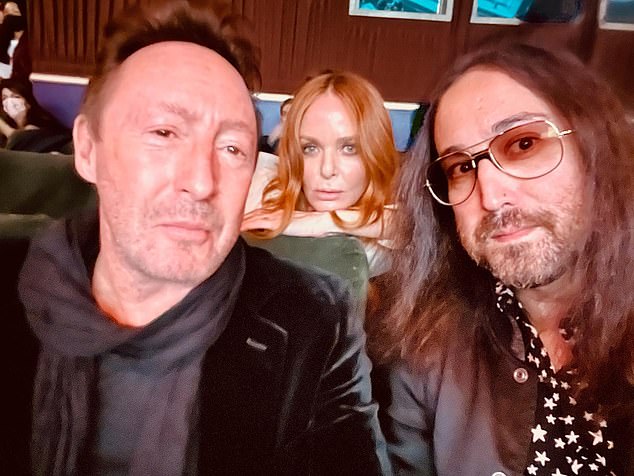 Deep in grief, Yoko asked Julian to stay with them in New York, but he felt that he belonged in Wales with his mother, so left.

For the next five years or so, Julian had limited contact with Yoko and Sean.

Julian told an interviewer in 1985 Sean adored him for his physical resemblance to John, but sensed Yoko wanted him at arms length.

His first album Valotte was a hit, and the single Too Late For Goodbyes — in which he sounded hauntingly like his father — an international hit.

Yoko had been sending Julian dribs and drabs of money, but Julian wanted a settlement. It was some time coming and there was a big legal fight.

A deal settled in 1996 gave him a percentage of John’s royalties and a lump sum said to be £20 million.

As Julian reflected in 2010: ‘It’s just not worth the stress. I think the key point to all this, for me at least, has been Sean. If I hurt Sean’s mother, then I hurt Sean.

‘It’s a roundabout way of thinking about things. But because I love Sean so much, I just don’t want to hurt him. I can get over it. Have gotten over it.’

With homes in Monaco, France, LA and London, Julian drifted from place to place, holidaying with wealthy and well-connected friends.

He resurfaced in 1998 with an album called Photograph Smile. It was a modest success — but it was outshone by Sean’s first album, Into The Sun, which came out in the same month. Julian was sure it wasn’t a coincidence, and thought Yoko was behind the clash.

He also complained that three or four years could go by without contact from his brother. ‘If I move, I always give Sean my new number. I call him from time to time, but I never get a return call,’ he said.

It was 2006 when, after some prodding from Cynthia, the two men spent a few hours together in Los Angeles. 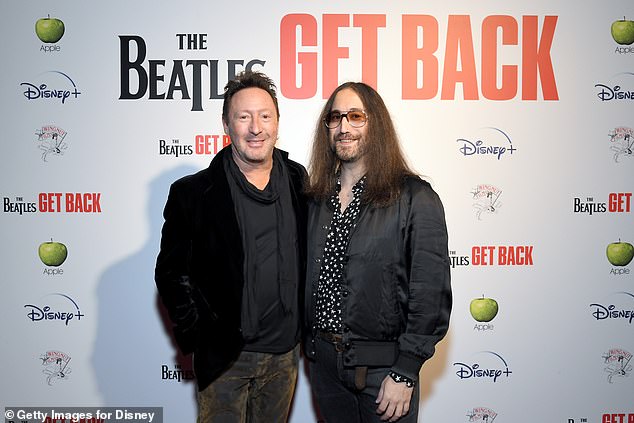 Julian and Sean attended the premiere of the Disney+ film Get Back, about the Beatles breakup

They found that they had much in common and, in 2007, went to Boujis nightclub in London’s Kensington.

Then, when Sean was playing in Prague later that year, Julian joined the tour unannounced and stayed on the musicians’ bus as it moved through Croatia and Slovenia.

Sean said: ‘How sweet is that? I am totally thrilled and deeply touched by this. It’s really fun having him on the bus. It’s nice to have some quality time with him. None of my friends are willing to rough it on the tour bus, so I am very impressed.’

That contact continued after the tour and, by 2010, Sean attended the opening of an exhibition of photographs by Julian with Yoko. Cynthia said that night: ‘I’ve never seen my son so happy as he is now.’ Julian chimed in: ‘There’s a lot of forgiveness now.’

Sean has continued to make music and tour, and Julian has moved into photographic and philanthropic work. He runs The White Feather Foundation, which works on environmental and humanitarian issues, and is behind a scholarship dedicated to women’s education founded in his mother’s memory. Cynthia died in 2015. He’s also written children’s books.

Both men go out of their way to support one another, and thoroughly enjoy each other’s company. Yesterday, Yoko’s spokesman Murray Chalmers said: ‘Sean and Julian have been as close as brothers can be for a long, long time.’

After their years of estrangement, each other’s company must be a greater treasure than they ever imagined.