John McAfee, the pioneer creator of popular computer antivirus software, has died in an apparent suicide at a Spanish prison, on the day that a court approved his extradition to the U.S. on tax evasion charges.

McAfee, 75, was found dead on Wednesday afternoon in his cell in Brians 2 Prison in Barcelona, with officials saying that the early investigation points to a suicide, the Catalan justice department said.

It came just hours after a Spanish court approved McAfee’s extradition to the United States, where he is wanted on tax-related criminal charges that carry a prison sentence of up to 30 years.

McAfee still had opportunities to appeal his conviction but could not stand more time in jail, his lawyer Javier Villalba told Reuters.

‘This is the result of a cruel system that had no reason to keep this man in jail for so long,’ Villalba said. 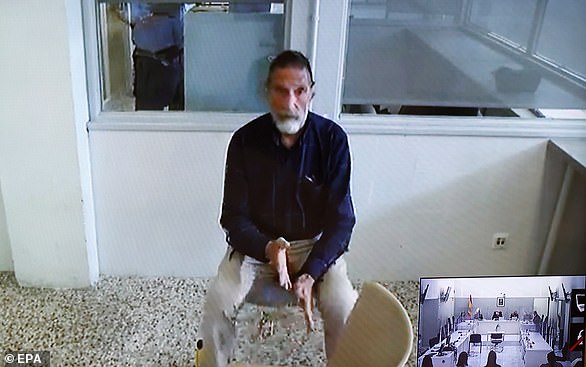 John McAfee appears via videoconference during his extradition hearing at Audiencia Nacional court, in Madrid, Spain earlier this month. He has died behind bars at 75

Villalba said that McAfee had committed suicide by hanging himself in his cell.

McAfee had been held in Spanish prison since his arrest in October, when the U.S. Justice Department announced charges that McAfee and his supporters insisted were politically motivated.

His death follows a wild, controversial life filled with legal issues and foreign adventures, including allegations that McAfee murdered his American neighbor in Belize, a claim that was never proven in criminal court.

Soon after his arrest last year, McAfee’s Twitter account posted a dark hint suggesting that if he died in an alleged suicide, a conspiracy would be to blame.

‘I am content in here. I have friends. The food is good. All is well. Know that if I hang myself, a la Epstein, it will be no fault of mine,’ he tweeted referring to persistent theories that sex predator Jeffrey Epstein did not take his own life, as authorities ruled.

In one of his final tweets, presumably dictated to his wife from behind bars and posted on June 16, McAfee denied having any hidden assets, claiming the fortune he made in an alleged cryptocurrency scam had ‘evaporated.’

‘I have nothing. Yet, I regret nothing,’ the tweet stated.

McAfee had praised conditions at the prison where he was being held in Spain, though his Twitter account sometimes complained about the food.

‘Life in Spanish prisons is like the Hilton compared to the abject surrealism and dehumanization of American prisons. Here I am treated as a human being instead of a number,’ McAfee said in a letter written to his wife, according to El Diario. 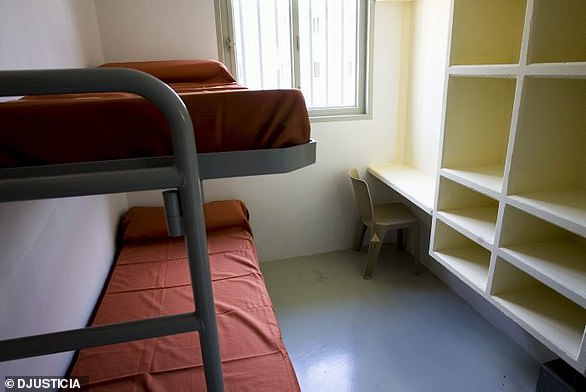 A cell at the Brians 2 Prison in Barcelona is seen in a file photo. McAfee was found dead in his cell on Wednesday afternoon in a suspected suicide

For years, McAfee had been living in self-imposed exile, fleeing what he claimed was a vast web of corruption and conspiracy in the U.S.

In January 2019, McAfee fled his heavily fortified Tennessee compound with wife Janice, 38, claiming a grand jury was preparing to indict him on tax-related charges and taking to the high seas to escape.

Touring the Caribbean on his ‘Freedom Boat’ also allowed McAfee to avoid a $25million judgement in a wrongful death lawsuit over the 2012 murder of his neighbor in Belize, Gregory Viant Faull.

McAfee was never criminally charged with the murder and he always strenuously denied it. He continued to trot the globe until his arrest in Spain last fall.

McAfee claimed to be trapped in Cuba by nefarious forces in June 2019, and that July he was briefly detained in the Dominican Republic after officials accused him of loading his yacht with high-caliber weapons.

Last year, Tennessee prosecutors charged McAfee with evading taxes after failing to report income made from promoting cryptocurrencies while he did consultancy work, as well as income from speaking engagements and selling the rights to his life story for a documentary.

The charges referred to the three fiscal years from 2016 to 2018, according to the Spanish court’s ruling on Wednesday.

The entrepreneur was arrested last October at Barcelona’s international airport. A judge ordered at that time that McAfee should be held in jail while awaiting the outcome of a hearing on extradition.

McAfee’s wife Janice said in a statement on Sunday that he had been targeted by prosecutors ‘for speaking out against the corruption within their government agencies.’

‘These eight months John has spent in prison in Spain have been especially hard on his overall health both mentally and physically, as well as financially, but he is undeterred from continuing to speak truth to power,’ she added.

In a hearing held via videolink earlier this month, McAfee also argued that the charges against him were politically motivated and said he would spend the rest of his life in prison if he was returned to the U.S.

McAfee linked the charges filed by the Internal Revenue Service to his failed bid to run as a Libertarian Party candidate in the 2020 U.S. presidential election, a second such attempt.

‘In late 2018, I announced I would run again and I also announced I would target the IRS and its corruption and two months later the IRS filed charged against me,’ he told the Spanish High Court during the first hearing of his extradition trial.

‘I believe the charges are politically motivated.’