The chance to buy low-cost life insurance without the need to answer intrusive medical questions is an attractive proposition for many elderly people.

When the cover is promoted on daytime television by trusted celebrities, as it was for many years, it can be irresistible.

But such insurance may turn out to be an expensive mistake, especially if you live until your late-80s or 90s – or decide to stop the monthly premiums. 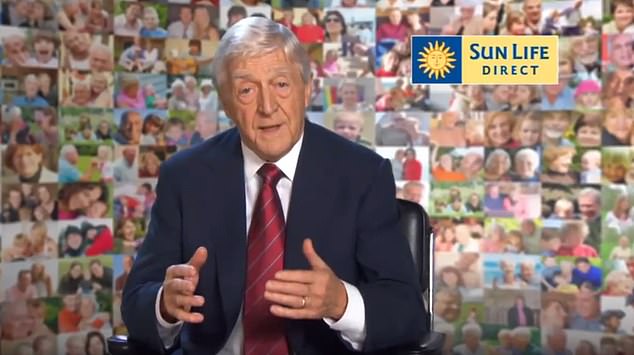 John Vigar, a retired timber industry executive, believes he was misled into buying such insurance. John, who recently turned 90, took out two ‘guaranteed over-50s’ life policies in April 2011 with SunLife, an insurer which used Sir Michael Parkinson in its advertisements.

One policy was for John and one for wife Ann – because he wanted to leave some money to their three grown-up children.

The policies guaranteed payouts of £1,625 on Ann’s death and £1,405 on John’s death. But on receiving the annual statements for the two policies in April this year, he discovered they had already paid out more in premiums than they could possibly gain from the combined payout on their deaths.

For the past seven years, John has forked out £24 a month for each policy. John considered stopping paying, but buried in the small print of the original documentation he found the wording: ‘If you stop paying your premiums for any reason your plan would be cancelled and you would not get any money back.’

The only concession is a six-month window that allows a missed payment to be made.

John agonised about how to escape this financial money pit – and contacted The Mail on Sunday about his concerns. But then Ann died suddenly in June, age 89, just months before the couple were due to celebrate their 60th wedding anniversary. John was devastated.

SunLife paid out a sum of £1,625 on Ann’s death, but this was £400 less than the couple had paid in premiums for her policy. John says: ‘It is small consolation that we paid just £400 more on Ann’s plan than was paid out. But what should I do about mine?’

So far, he has paid £1,700 for a policy that upon his death will pay out £1,405. He feels misled and had he known about the pitfall, would have opted for a savings account instead.

John was also unlucky selecting SunLife (which became AXA and then recently Phoenix) because it is one of the few providers that demanded payments on his plan continue for ever. 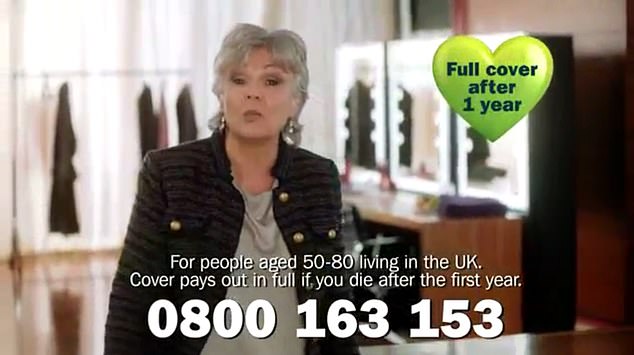 STARRING ROLE: LV= used British actress Julie Walters as the face of its 50 Plus plan advert

Several other companies stop collecting premiums automatically when a customer turns 90 but allow the cover to continue. SunLife offers this as an option on newer plans.

John feels doubly affronted at the expensive advertising that continues to grace daytime TV. He says the key fact that cover would cease if premiums were not maintained was too small for him to see on screen.

It was only recently that his son pointed out the exclusion while they were watching television together. He says: ‘People should not take up this insurance offer unless they believe they will die within five years.’ Many thousands of such plans are sold every year – and SunLife boasts a 60 per cent market share.

People often buy the plans to ensure there is a sum that can go towards paying for their funeral. But these costs are escalating. Last year, funeral bills averaged nearly £4,300 – some 5 per cent higher than a year earlier.

Free alarm clocks, £100 shopping vouchers and £10,000 prize draws are just some of the incentives providers have used over many years to lure new customers – along with advertising featuring celebrities such as Michael Parkinson and actress Julie Walters, the latter who featured in advertisements for LV=.

James Daley, of consumer website Fairer Finance, says: ‘Celebrities tended to take the customers’ eyes off the ball when they needed to focus on what is an important financial decision. People must fully understand the limitations of these policies.’

Over-50s plans can be attractive for people in poor health who do not expect to live long. But some plans will only return the premiums paid if you die in the first or second year. If you have reached the premium tipping point – where you will get less from the benefit than you have already paid in – it is probably best to grit your teeth and continue. Give up and the insured sum is lost forever. Those who want the sum insured to rise in line with inflation can pick a provider with this option – but premiums will also increase.

For example, the inflation-linked cover offered by Sainsbury’s requires the policyholder to increase their premiums by one- and- a- half times the rate of inflation.

Some plans, such as SunLife’s, will pay the full sum assured if the policyholder dies within two years of taking out the plan – but only if as a result of an accident.

Policyholders who struggle to meet premiums can sometimes opt to reduce them for a lower benefit. Royal London’s policy for the over-50s is the only one to get a five-star rating from Fairer Finance.

As for John, he is still unsure as whether to stick or twist.

Worries about how loved ones will cope if a breadwinner dies mean many people take out life insurance that guarantees a tax-free lump sum on death.

But The Mail on Sunday has learnt that as many as nine out of ten policy buyers fail to take simple steps to stop these plans being derailed by a potential 40 per cent tax bill. The trap can be avoided by completing a legal document called a ‘trust deed’ soon after purchase.

If the policy is not put in a trust, any windfall is added to any worldly goods left behind – and can land beneficiaries with a bill.

A trust deed can be downloaded from your insurer’s website. This removes any payout from the estate – so there should be no death tax to pay. Another advantage is the money is available as soon as the insurance claim is paid – not left to languish while the estate goes through probate, which can take months.

This is vital if a family needs the cash to meet bills such as funeral costs. It could also help meet the controversial new stealth tax on probate revealed last week – where the cost for securing legal control over an estate rises next year from the current flat fee of £215 to up to £6,000 on large estates.

Tom Baigrie, of insurance broker LifeSearch, says: ‘Putting the policy in trust sounds more complicated than it actually is. You just need to decide who should receive the money and then fill out a single form. But sadly many never quite get around to doing it.’

People can be deterred because trust documents can only be organised once someone has purchased their insurance. Another hurdle is making the correct choice of trust. An ‘absolute’ trust suits most people who want to leave the money to a spouse or children. But once set up, the trust cannot be altered. A ‘discretionary’ trust is more flexible and beneficiaries can be added later.

It is not too late for a living policyholder to put their policy in trust. A trust deed can be completed at any time and sent to the insurer.

Angela Murfitt, of financial planner Fairstone Financial Management, says forms are available on most insurers’ websites. She says: ‘The insurer will not take any responsibility for the effect of using these trust deeds –- and will add the caveat that they should seek legal advice.’

Policyholders preferring legal help can get tailored documentation from around £250 from specialist trust firms. Find one at unbiased.org.uk or step.org.uk.

Boris Johnson’s plan to ‘save Christmas’: PM says UK must be tough NOW to ‘flatten the second hump’

Boris Johnson's plan to 'save Christmas': PM says UK must be tough NOW to 'flatten the second hump'