Amber Heard testified that Johnny Depp ‘hated’ actor James Franco and accused her of having an affair with him.

Heard, 36, was on the stand Thursday for her second day of testimony where she described a fight the couple had on an airplane in May 2014 and said Depp kicked her in the back.

‘He was mad at me for taking the job with James Franco,’ Heard said. ‘He hated, hated James Franco and he was already accusing me of kind of secretly having a thing with him in my past because we had done Pineapple Express together.’

Heard described the airplane incident, which Depp had testified about before, admitting that he had been drunk and taking drugs. Heard said that Depp was upset with her for not telling him about romantic scenes that she had with Franco.

‘He called me a go-getter, he called me a slut – this is happening with security and his assistants on the plane,’ she said. ‘I slowly get up and he starts throwing things at me. Ice cubes, utensils. He’s calling me an embarrassment, what an embarrassment I am. It felt like there was a blackness in his eyes, it didn’t even feel like him.

‘I feel this boot in my back. He just kicked me in the back. I fell to the floor and felt like I was looking at the floor of the plane for a long time. No one said anything. You could hear a pin drop. You could feel the tension but no-one did anything.’

She said Depp continued to drink and ‘started howling like an anima’ before passing out in the airplane bathroom with the door locked.

‘I hit record on my phone. I knew Johnny would not remember what he’d done.’ 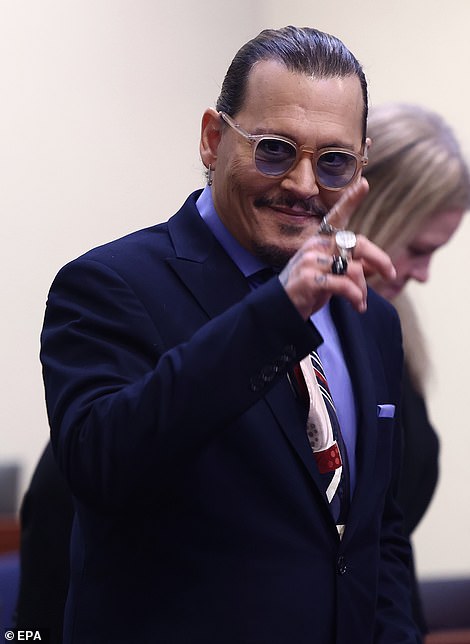 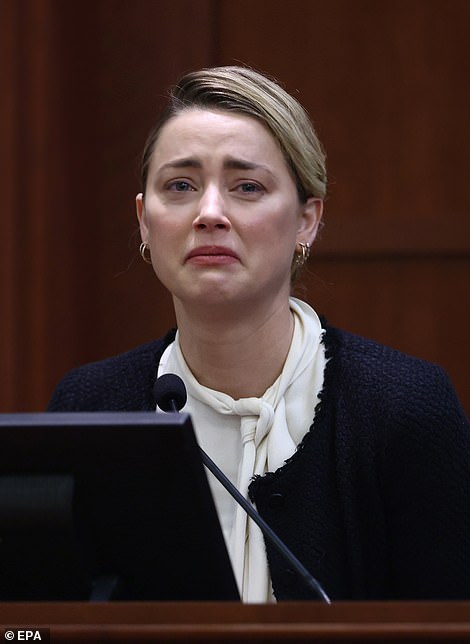 Depp, 58, appears unbothered by the testimony of his ex-wife Heard, 36, who told the jury Wednesday that her ex was an abuser who assaulted her multiple times during their very brief marriage 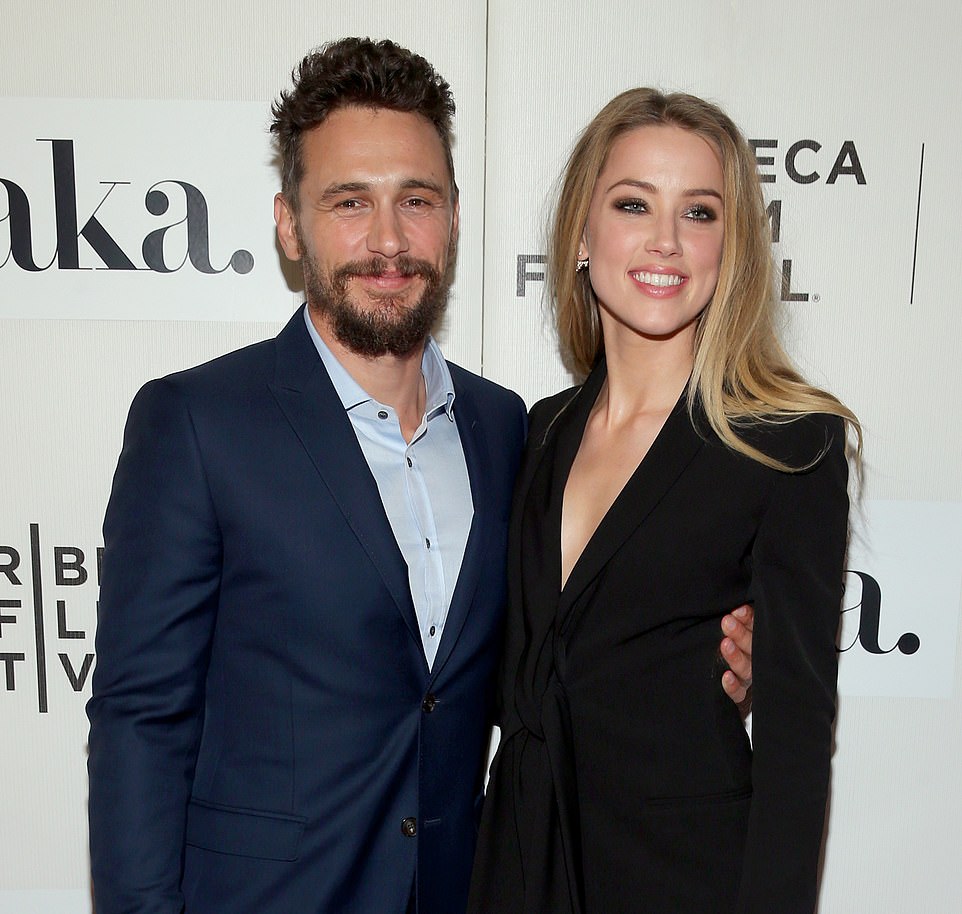 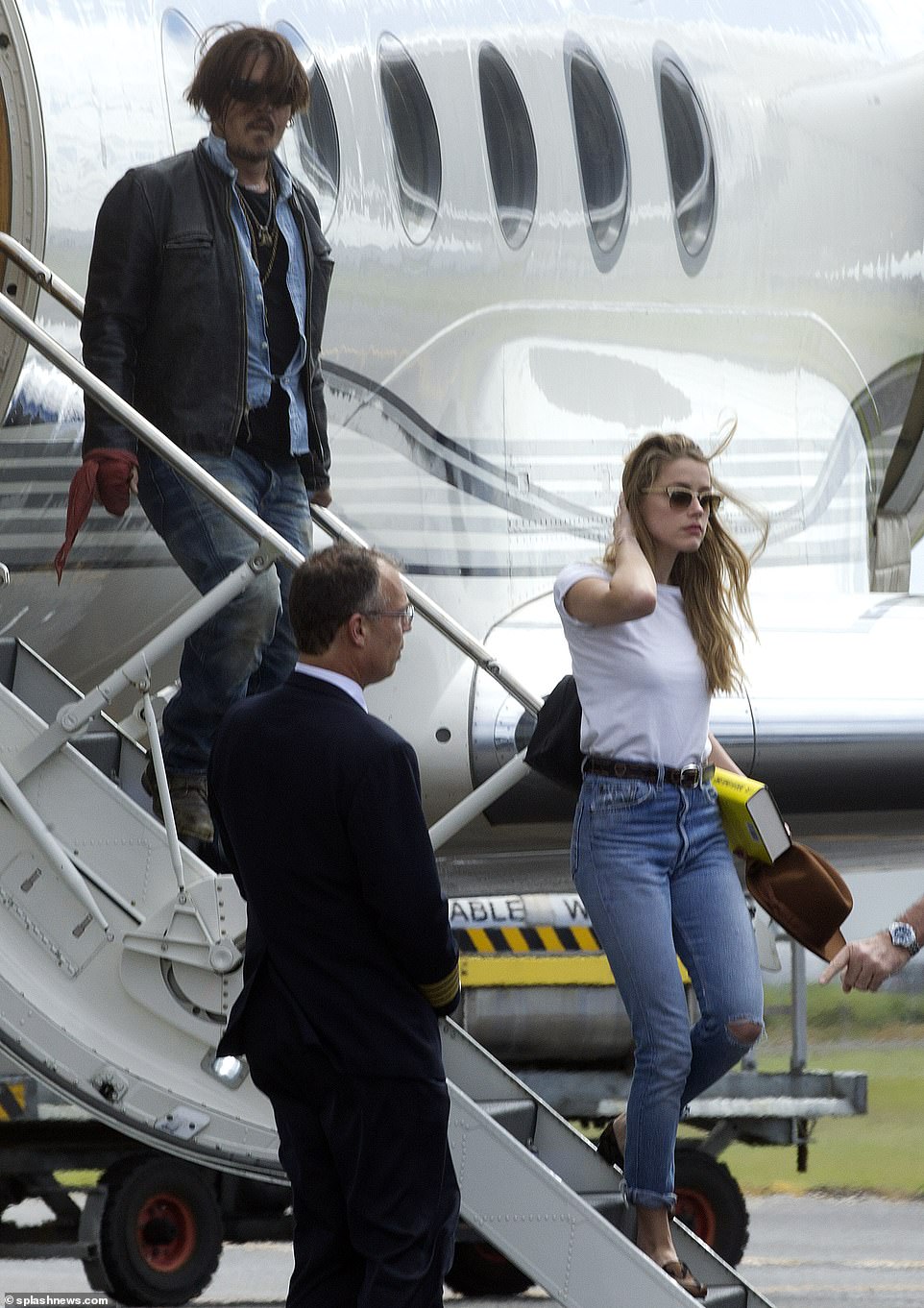 Heard, 36, was on the stand Thursday for her second day of testimony where she described a fight the couple had on an airplane in May 2014 and said Depp kicked her in the back 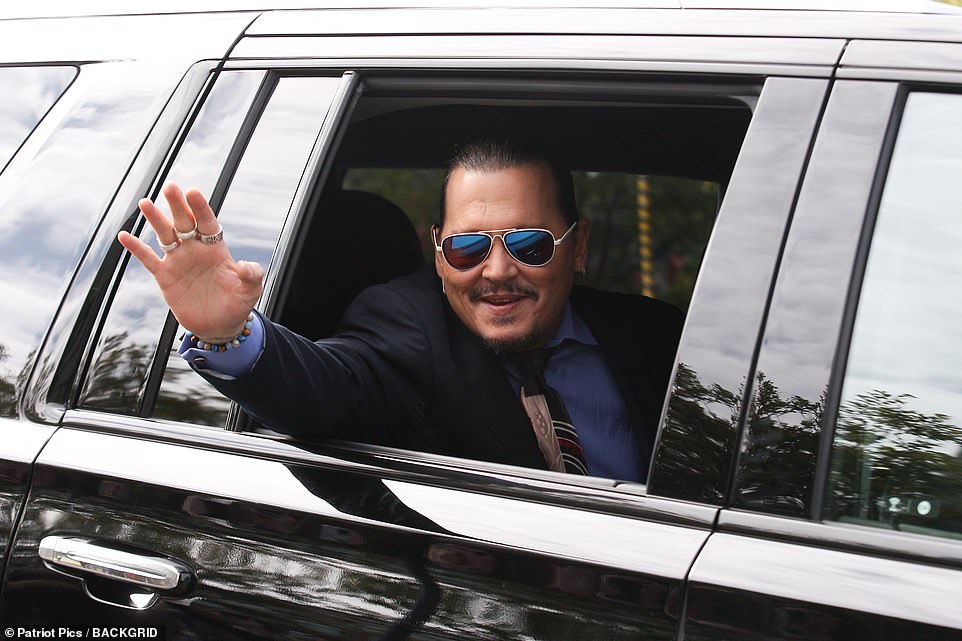 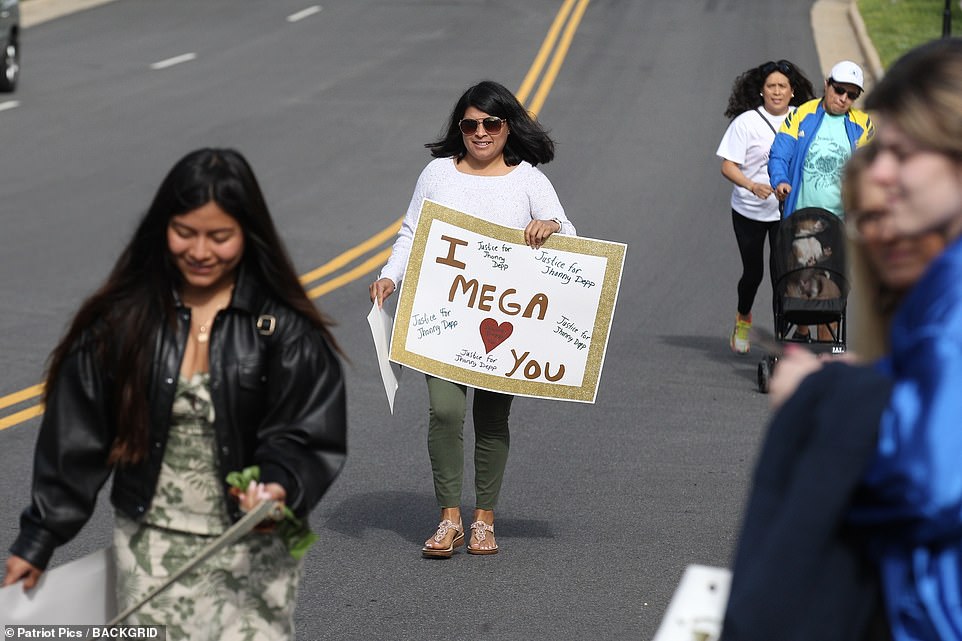 Fans holding signs lined up outside of the Fairfax, Virginia, courthouse Thursday to show their support for for the Pirates of the Caribbean actor who waved as he drove by 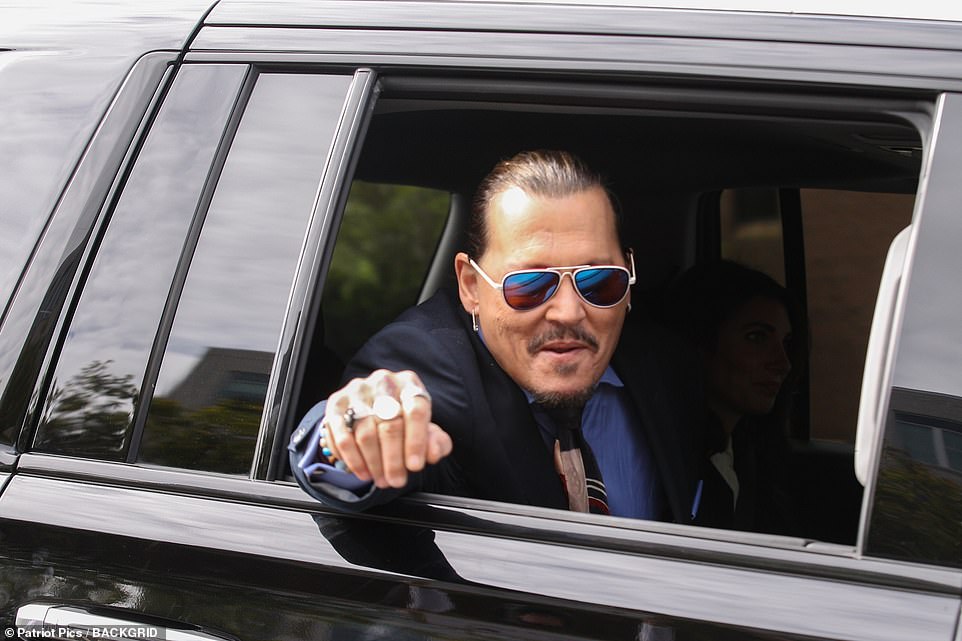 Depp was all smiles this morning as he rolled up to court blasting ‘War’ by Bob Marley to face Amber Heard in her second day of testimony.

Fans lined up outside of the Fairfax, Virginia, courthouse Thursday holding signs to show their support for the Pirates of the Caribbean actor who waved to them as he drove by.

Depp, 58, has appeared unbothered by the testimony of his ex-wife Heard, 36, who told the jury Wednesday that he was an abuser who assaulted her multiple times during their brief marriage.

The court was shown photos of Depp passed out in 2013 on Thursday.

Heard had taken the picture and said she began taking photos to ‘say look this is happening.’

‘I understood enough about addiction to know you have to hit rock bottom, have some consequence to get better,’ she said.

‘At the time I was already sensitive, Id’ been in the relationship for over a year. I’d already noticed there was this pattern of behavior changes that would make my life significantly more complicated or peaceful or difficult or wonderful dependent on what he was using.

‘I could tell what he was using because I’d have to look for clues. He’d pass out, get sick, lose control of himself. People would pick him up and clean it and fix it.

She said Depp wouldn’t remember any of his behavior or deny it happened.

‘There was no one to back me up, just his employees versus my word.’

Another picture showed Depp asleep in a chair in March 2013.

‘This was after a several day bender, a binge of Johnny’s.

‘He tried to burn a painting, it was accusing me of having affairs with a musician, my ex-partner. He was on a drug binge, no eating, little to no sleep and he would use cocaine and drink all day long. That would go for a period of time. Then a major blow out and he’d get sick, pass out, feel really awful and start a period of sobriety.’ 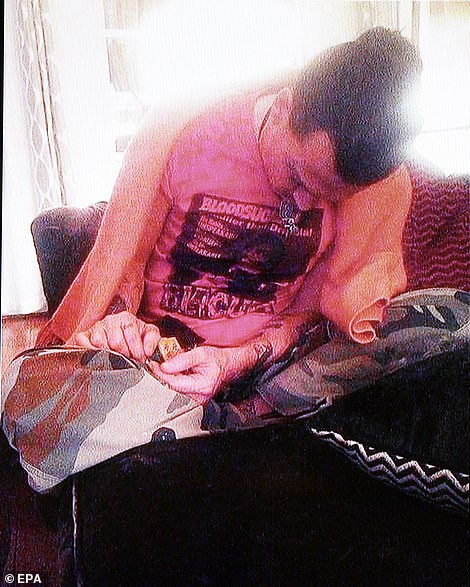 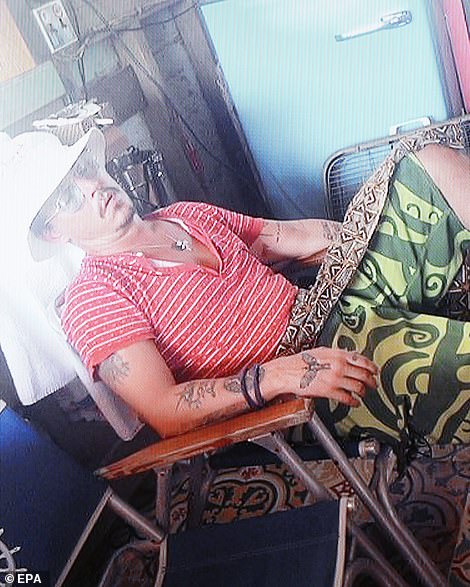 The court was shown photos of Depp passed out in 2013 on Thursday. Heard had taken the picture and said she began taking photos to say ‘look this is happening’ 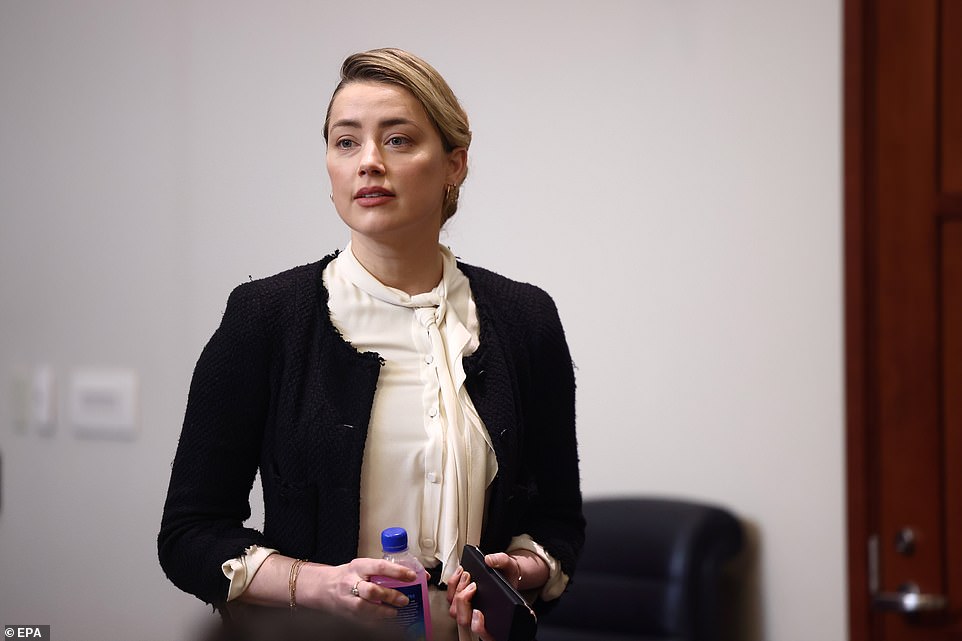 ‘I understood enough about addiction to know you have to hit rock bottom, have some consequence to get better,’ Heard said 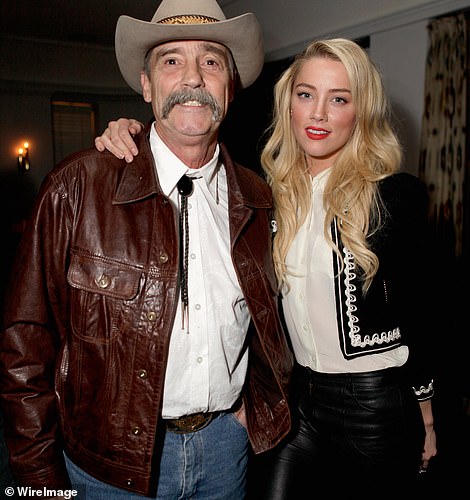 Amber Heard (right) alleged her father, David Heard (left), and Johnny Depp (not pictured) were addicted to the same substance. Amber and David are seen at Lisa Hoffman’s Fragrance Jewelry Event in Los Angeles in 2012

Depp disappeared from his own engagement party to do drugs with his then-fiancee’s addict father, Heard testified.

The actress accused Depp  being absent for ‘almost the entire party’ and snapping at her when she asked him to greet guests.

‘He came down at the end when we were leaving and he came down once because he was, at the time, sharing drugs with my dad,’ she added, alleging that her father was ‘addicted to the same thing Johnny was’.

Heard, 36, claims the pair ran out of the substance and left the party because ‘they needed more of course’. She did not specify what drug the pair were allegedly using.

‘My dad actually left with Johnny’s security to get more drugs,’ she said. ‘They left…they came back with drugs and everything was ok, in terms of the withdrawal symptoms.’

‘Shortly after that I tried to get Johnny to come downstairs and he just snapped at me, just verbally told me to “shut the f**k up,”‘ Heard recalled.

Heard took the witness stand for the first time on Wednesday in the widely followed trial and said the pair had a ‘magical’ relationship until it turned violent.

Depp’s first physical outburst, Heard said, came after she asked what was written on one of his faded tattoos. She said he replied ‘Wino,’ and she laughed, thinking it was a joke.

‘He slapped me across the face,’ Heard said. ‘I didn’t know what was going on. I just stared at him.’

Depp testified earlier in the trial that the tattoo fight ‘didn’t happen’ and that he never hit Heard. He argued that she was the one who was the abuser.

Under questioning by her lawyers, Heard said Depp assaulted her ‘several times,’ usually when he was drinking or using drugs. During a weekend away with friends in May 2013, Heard said, Depp accused her of inviting what he perceived as suggestive advances from a woman.

That evening, Heard said Depp ripped off her underwear and stuck his fingers ‘inside’ her in a ‘cavity search’ for drugs.

Earlier, psychologist Dawn Hughes testified that Heard had told her Depp had put his fingers up her vagina in a hunt for cocaine. 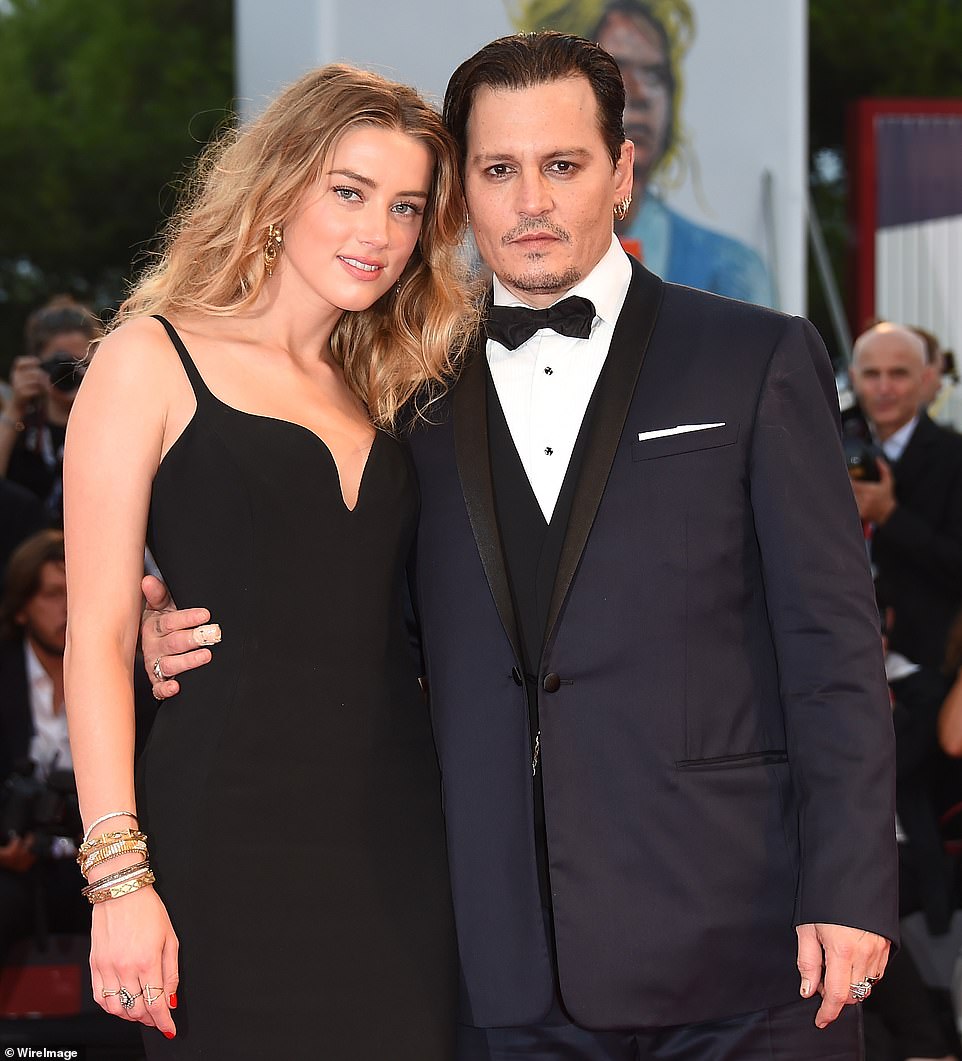 Depp and Heard are seen in September 2015 in Venice, Italy – the same year a blowout fight in Australia took place

The case hinges on a December 2018 opinion piece Heard authored in the Washington Post. The article never mentioned Depp by name, but his lawyer told jurors it was clear Heard was referencing him. The couple’s divorce was finalized in 2017 after less than two years of marriage.

Depp, once among Hollywood’s biggest stars, said Heard’s allegations cost him ‘everything.’ A new ‘Pirates’ movie was put on hold, and Depp was replaced in the ‘Fantastic Beasts’ film franchise, a ‘Harry Potter’ spinoff.

Heard’s attorneys have argued that she told the truth and that her opinion was protected free speech under the U.S. Constitution’s First Amendment.

A state court judge in Virginia’s Fairfax County, outside the nation’s capital, is overseeing the trial, which is expected to last until late May.

Less than two years ago, Depp lost a libel case against the Sun, a British tabloid that labeled him a ‘wife beater.’ A London High Court judge ruled he had repeatedly assaulted Heard.

Depp’s lawyers have said they filed the U.S. case in Fairfax County because the Washington Post is printed there. The newspaper is not a defendant.

Johnny Depp and Amber Heard marry in a private civil ceremony at their LA home, four years after they met as co-stars on the set of The Rum Diary. The couple celebrate with a lavish reception on an idyllic private island in the Bahamas that Depp bought in 2004 for $3.6 million.

Heard breaches Australia’s biosecurity laws when she and Depp fail to declare their two Yorkshire terriers when they arrive Down Under on a private jet for the filming of Pirates of the Caribbean: Dead Men Tell No Tales. Heard admits falsifying quarantine documents and is placed on a $1,000 one-month good behavior bond.

Heard files for divorce after 15 months of marriage, citing irreconcilable differences. Four days later a judge issues a temporary restraining order against Depp over domestic violence allegations. Pictures of Heard’s alleged injuries hit the tabloids but the LAPD finds no evidence of a crime.

Depp and Heard reach a $7 million divorce settlement which the actress promises to give to charity. Their marriage was ‘intensely passionate and at times volatile, but always bound by love,’ the former lovers say in a statement. ‘There was never any intent of physical or emotional harm’.

The Washington Post publishes an op-ed by Heard, an ambassador for women’s rights at for the American Civil Liberties Union, urging support for women who suffer domestic violence. ‘Two years ago, I became a public figure representing domestic abuse, and I felt the full force of our culture’s wrath for women who speak out,’ reads the headline.

Despite not being named in the article, Depp files a $50 million defamation suit in Fairfax Circuit Court, Virginia saying it implied he was an abuser and got him fired from the Pirates of the Caribbean franchise. Depp dismisses Heard’s abuse allegations as a ‘hoax’ and claims he was actually the victim of her violence.

Heard countersues for $100 million, claiming vengeful Depp and his lawyer Adam Waldman targeted her with a vicious smear campaign, using media allies and internet trolls to amplify false stories about her and derail her acting career.

Depp faces an uphill battle to save his reputation after he loses a libel battle with a British tabloid that labeled him a ‘wife beater’. A judge in London’s rules that The Sun’s 2018 article was ‘substantially true’ and that the father-of-two had attacked Heard a dozen times, causing her to fear for her life on three occasions.

After lengthy delays due to the Covid pandemic, the former flames finally lock horns in Fairfax County, Virginia where the Washington Post servers that published the disputed op-ed are based. The trial is expected to last six to seven weeks and celebrities tipped to give evidence include James Franco, Paul Bettany and Ellen Barkin.