The manager of Johnny Depp’s private island in the Bahamas testified Tuesday that she saw the actor passed out face-first in the sand in front of his children after drinking.

The incident appears to have taken place in the summer of 2013 when Depp and his family were taking one last trip on his yacht, the Vajoliroja, before he sold it to Harry Potter creator J.K. Rowling.

Bredehoft asked Robert if she remembered when Depp’s children Lily-Rose and his son Jack ‘were upset on the yacht and wanting to leave it immediately’ so she arranged for a helicopter to take them away with Heard.

Roberts said she recalled arranging for transportation off the island for Heard and Lily-Rose.

Bredehoft asked if Roberts recalled that Jack decided ‘at the last minute to stay back.’

Bredehoft asked: ‘Do you recall Lily-Rose saying to you she was upset because her father was drinking and he was trying to hide it from her.’

After an objection Roberts did not answer. 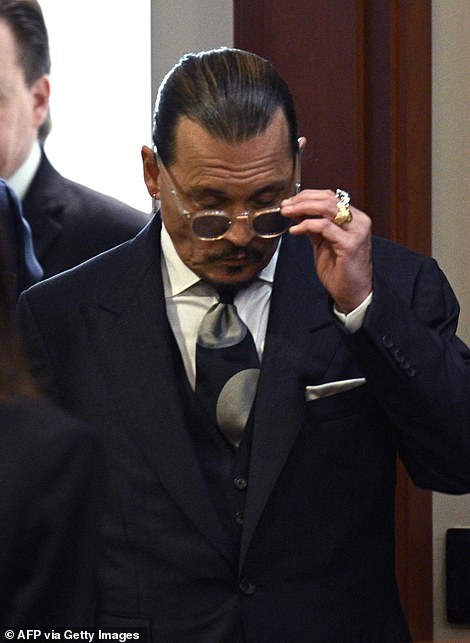 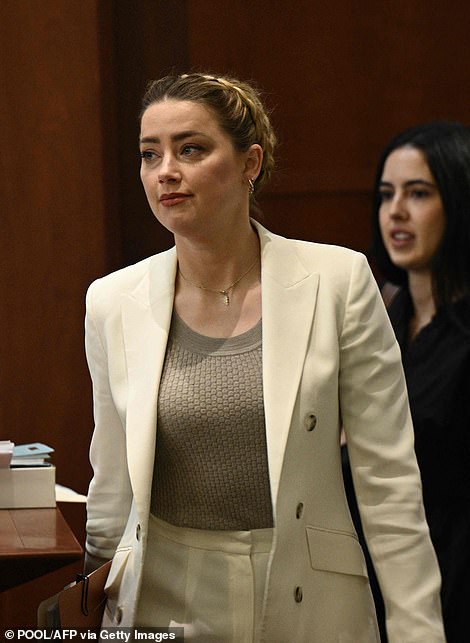 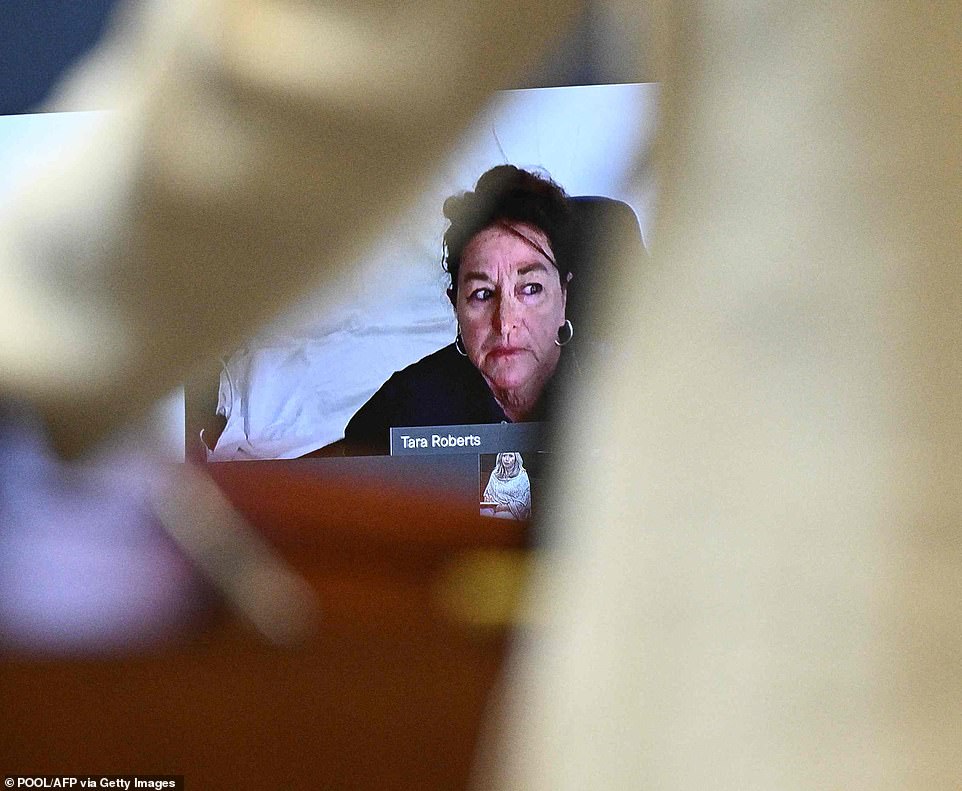 Appearing via video, the manager of Johnny Depp’s private island in the Bahamas Tara Roberts spoke about an incident where Johnny Depp was passed out drunk in front of his children 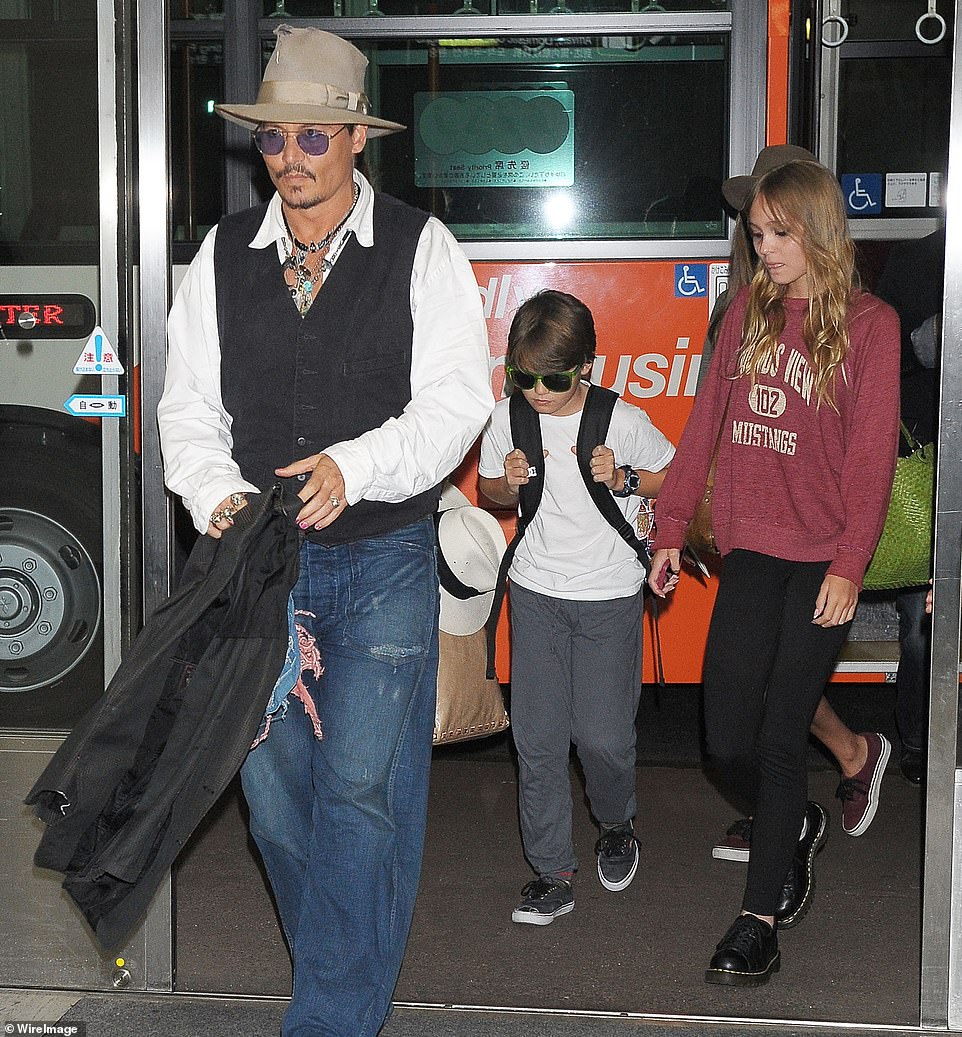 Bredehoft asked Robert if she remembered when Depp’s children Lily-Rose and his son Jack ‘were upset on the yacht and wanting to leave it immediately’ so she arranged for a helicopter to take them away with Heard. Pictured in 2013

Bredehoft said: ‘Do you recall Mr. Depp passing out in the sand face first?’

Bredehot said: ‘Do you have a recollection of Jack being present when Mr. Depp was passed out face first in the sand?’

Asked by one of Depp’s lawyers to elaborate on the incident where he passed out on the beach, Roberts said: ‘He was passed out, I picked him up, brushed him off. He was in a hammock. I believe he’d fallen asleep and the hammock overturned. I picked him up and left him underneath the (inaudible) with Jack’.

Bredehoft asked: Do you believe Amber would cover up bruises to hide them from the kids?

After an objection Roberts did not answer.

Bredehoft asked: ‘Do you have any understanding whether she’d try to cover up bruises or cuts to keep them from the kids?’

After another objection, Roberts did not answer.

Roberts described a visit by Depp and Heard to the island in December 2015 – Depp has previously testified that Heard threw a can of mineral spirits at him on the trip.

Roberts said one evening she and another island employee named CJ were in the office of the island and Depp came into ‘agitated, walking back and forth.’

They talked for a few minutes and then Heard came in telling Depp ‘please come back, I’m sorry come back.’

Roberts said: ‘He stood here reluctant to go, didn’t want to go, (there was a) little exchange back and forth.

‘He left the office and got into his vehicle and started it up and Amber went outside and stood in front of the vehicle. He didn’t drive away. 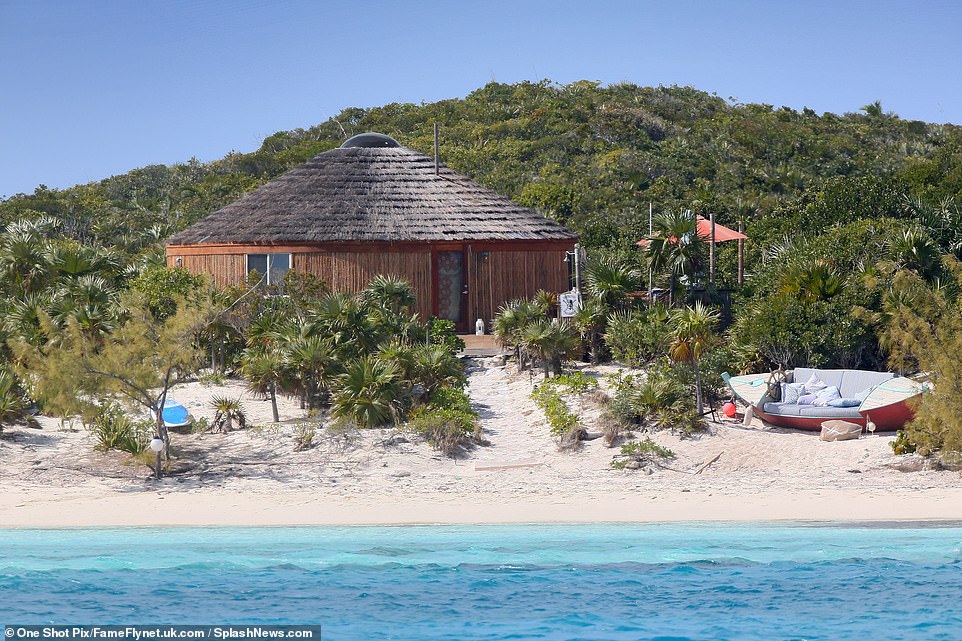 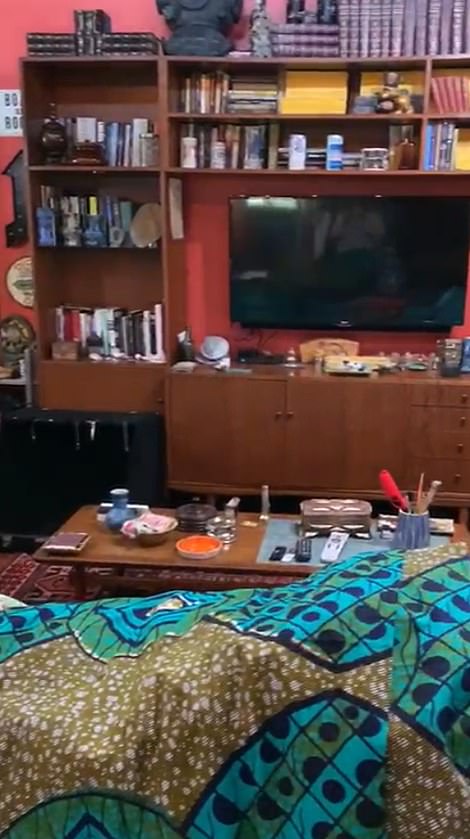 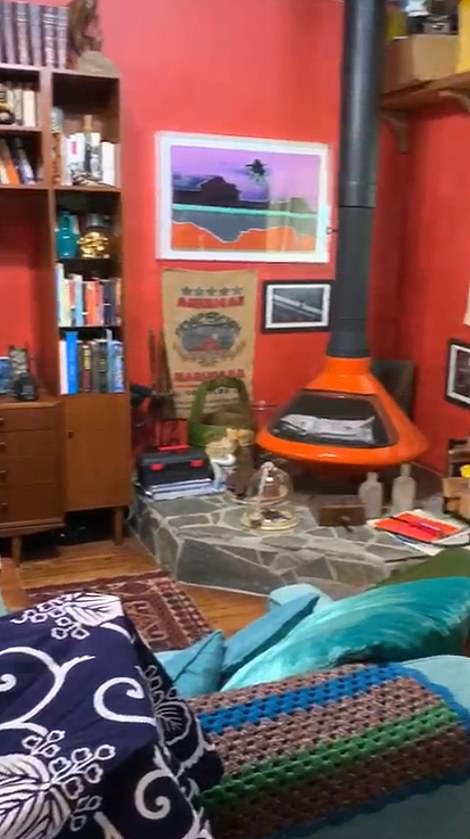 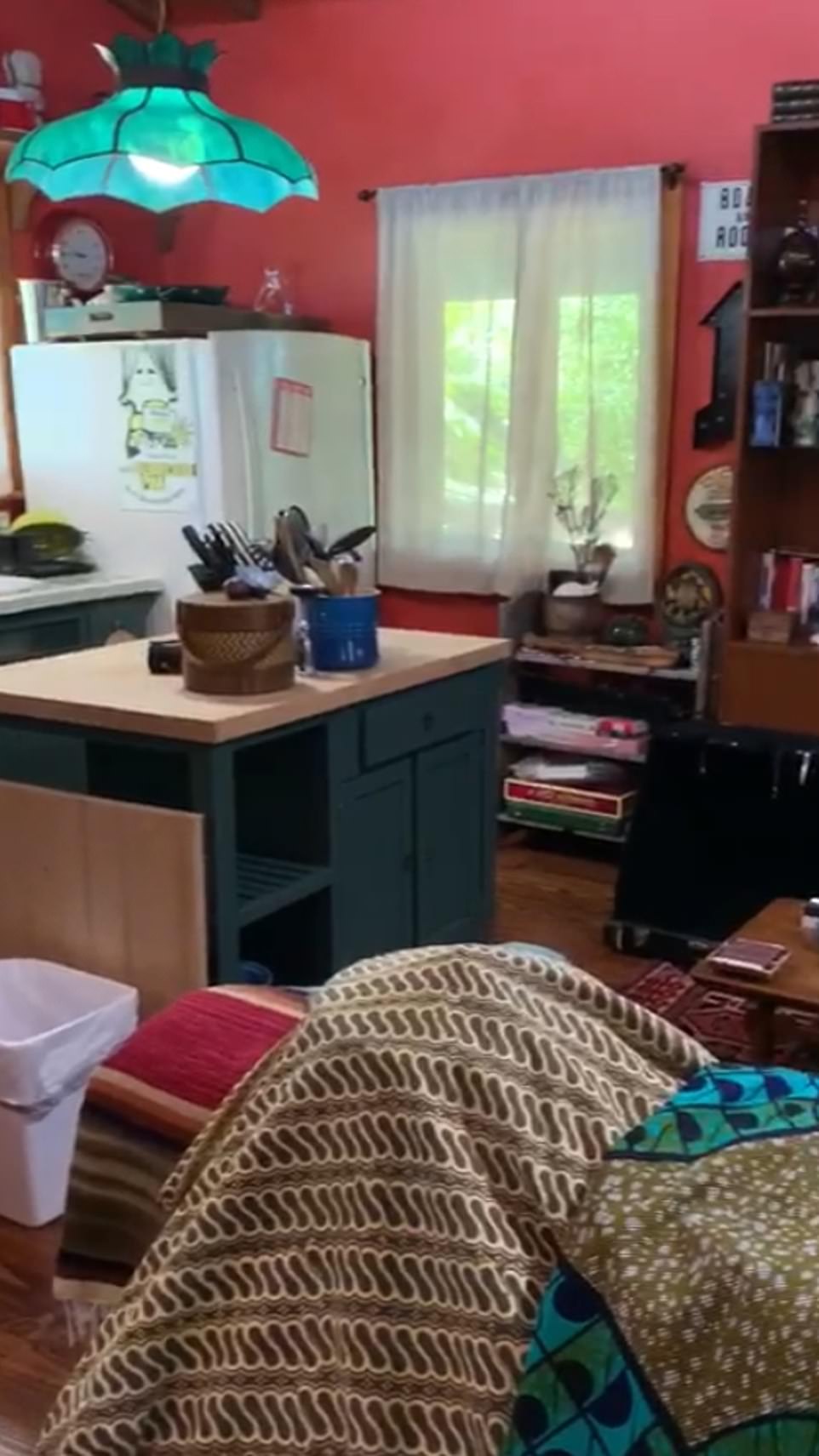 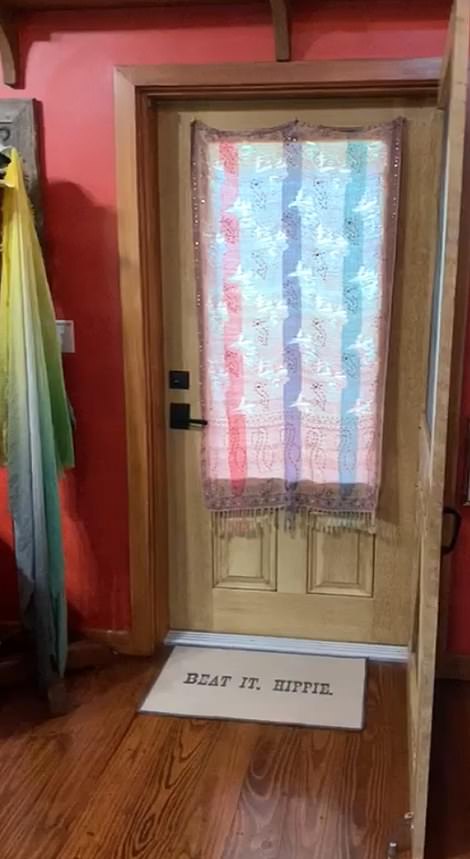 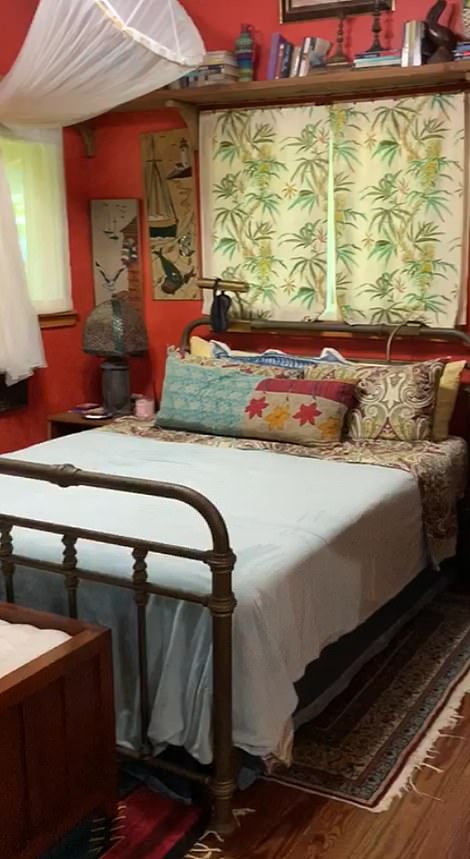 Roberts said she and CJ decided to follow them in a golf cart to the house to make sure the couple were okay.

When they arrived ‘you could hear them inside the house yelling,’ Roberts said.

She said: ‘Amber was yelling and Johnny answered back, you could hear what was being said. We stood there for a couple of minutes.

‘Then you started to hear Amber telling him he was a washed up actor, he was going to die a fat, lonely old man.

‘Johnny said you hit me with a can of mineral spirits. Johnny came down the steps, Amber was behind him, she had a bottle in her hand. There was a pause of initial shock, neither Johnny nor Amber knew we were there.

‘He proceeded to walk back to the John Deere (4×4 vehicle). Amber came up to him, saying she was sorry, please come back in the house.

‘She was hugging and kissing him, telling him I love you. Johnny didn’t react, eventually got out of the John Deere and walked away.

‘Amber started to grab at him, trying to pull him back to the house and yelling at him.’

Roberts said that at that point she was between Depp and Heard and was ‘worried what was going to happen’ so she took Depp away to another building where he passed out and fell asleep on the sofa.

Asked to describe how Heard was trying to pull Depp back, Roberts said: ‘It was clawing, grabbing his clothes, grabbing his hair, like an angry – he was leaving. He couldn’t leave in the vehicle because the keys had been taken out.

‘The only way to (leave) was for him to walk away. It wasn’t a pleasant situation.’

Asked how Depp reacted, Roberts said: ‘He didn’t. He stood there with his arms by his side. He didn’t do anything.’

While in the other building Roberts said that she noticed that Depp had a mark across the bridge of his nose.

She got a bag of ice and put it over the mark and checked it wasn’t bleeding.

The following morning Roberts did not notice any injuries on Heard, she told the court. 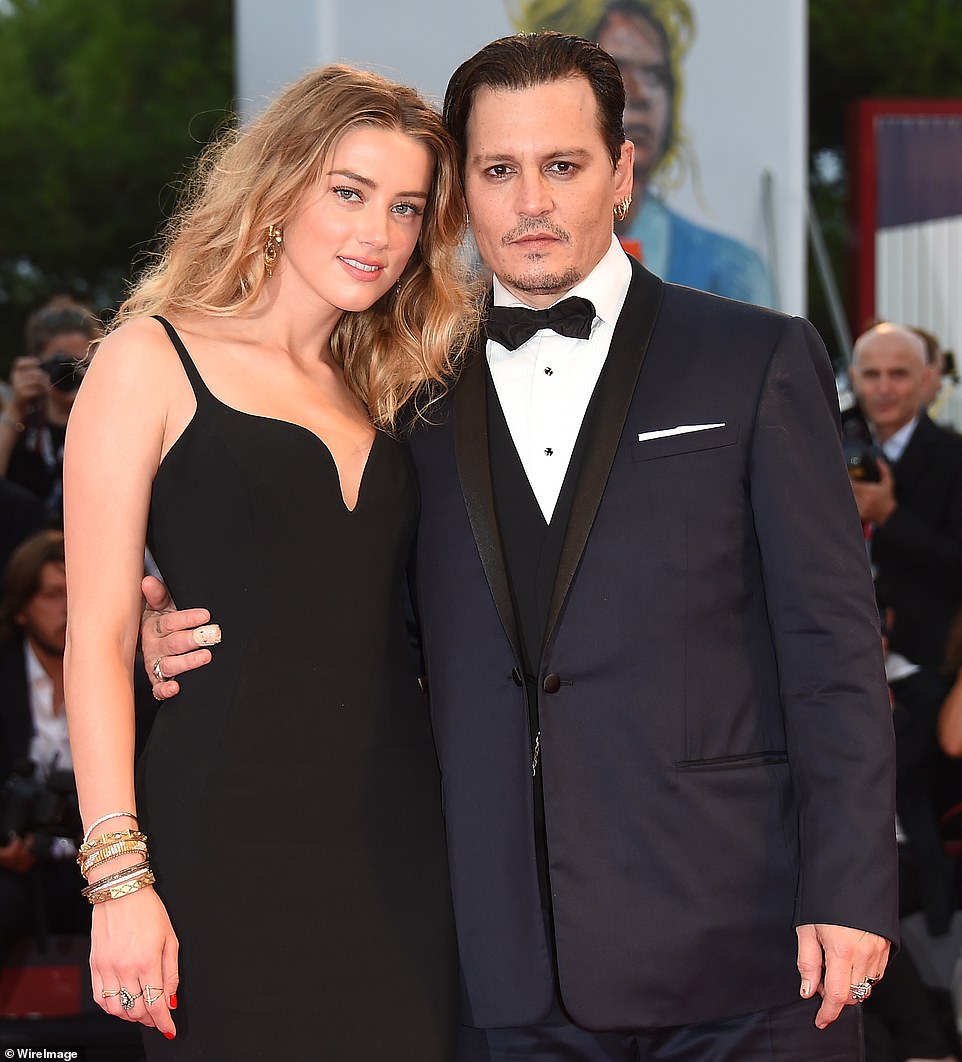 Depp and Heard are seen in September 2015 in Venice, Italy – the same year a blowout fight in Australia took place

Roberts told the court she was there when British actor Paul Bettany, his wife and children visited the island in the summer of 2013. 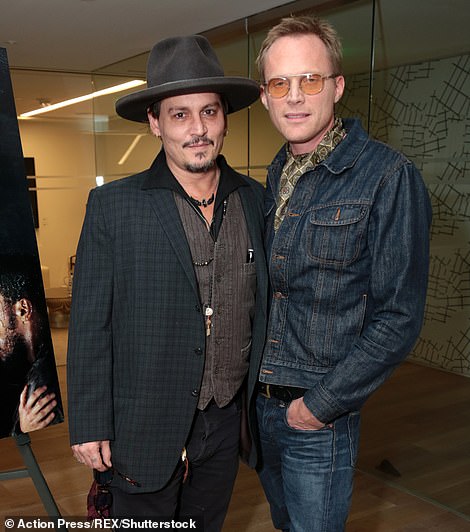 In his testimony Depp described how Heard was so rude to actor Paul Bettany’s 18-year-old son that the boy broke down in tears. Depp said that he asked Heard to leave the island afterwards

In his testimony Depp described how Heard was so rude to Bettany’s 18-year-old son that the boy broke down in tears. Depp said that he asked Heard to leave the island afterwards.

Asked how life on the island changed with Heard’s visits, Roberts said that as the months went by there were ‘more requests’ from her ahead of the trip, along with more luggage.

She said: ‘Things evolved and mushroomed a bit.’

Roberts drew a smile from Depp when asked how often she had seen him drunk.

She replied that he had a ‘huge tolerance for alcohol’ and had never seen him passed out from drinking.

Depp and Heard got married on the island in February 2015 and Roberts said that there was a detailed schedule with what was happening each day.

She testified that the schedule said there was ‘dinner, dancing, drugs, music’ – Depp has previously testified that Heard and her friends were all on MDMA.

Roberts said that she was she was ‘very careful’ to ensure nobody would be able to take photos of the event, including paparazzi.

She said: ‘Everybody was given disposable cameras and asked not to take pictures.’

‘We were doing the ceremony at sunset so there wouldn’t be an issue with paparazzi people.

‘When the ceremony was about to happen, it happened earlier than schedule, bridal party showed up early and we were scrambling for flowers and getting beverages down there.

‘There was a plane circling overhead and taking pictures and the ceremony proceeded earlier than was scheduled.’

Roberts said that she ordered Dr. Pepper and sugar free Red Bull for the event as that was what Depp was drinking at the time.

I was given a list of food, a list of beverages for wines, champagne, asked to have Dr. Pepper and sugar-free red bull because that was what Mr. Depp at the time was drinking.’

Johnny Depp and Amber Heard marry in a private civil ceremony at their LA home, four years after they met as co-stars on the set of The Rum Diary. The couple celebrate with a lavish reception on an idyllic private island in the Bahamas that Depp bought in 2004 for $3.6 million.

Heard breaches Australia’s biosecurity laws when she and Depp fail to declare their two Yorkshire terriers when they arrive Down Under on a private jet for the filming of Pirates of the Caribbean: Dead Men Tell No Tales. Heard admits falsifying quarantine documents and is placed on a $1,000 one-month good behavior bond.

Heard files for divorce after 15 months of marriage, citing irreconcilable differences. Four days later a judge issues a temporary restraining order against Depp over domestic violence allegations. Pictures of Heard’s alleged injuries hit the tabloids but the LAPD finds no evidence of a crime.

Depp and Heard reach a $7 million divorce settlement which the actress promises to give to charity. Their marriage was ‘intensely passionate and at times volatile, but always bound by love,’ the former lovers say in a statement. ‘There was never any intent of physical or emotional harm’.

The Washington Post publishes an op-ed by Heard, an ambassador for women’s rights at for the American Civil Liberties Union, urging support for women who suffer domestic violence. ‘Two years ago, I became a public figure representing domestic abuse, and I felt the full force of our culture’s wrath for women who speak out,’ reads the headline.

Despite not being named in the article, Depp files a $50 million defamation suit in Fairfax Circuit Court, Virginia saying it implied he was an abuser and got him fired from the Pirates of the Caribbean franchise. Depp dismisses Heard’s abuse allegations as a ‘hoax’ and claims he was actually the victim of her violence.

Heard countersues for $100 million, claiming vengeful Depp and his lawyer Adam Waldman targeted her with a vicious smear campaign, using media allies and internet trolls to amplify false stories about her and derail her acting career.

Depp faces an uphill battle to save his reputation after he loses a libel battle with a British tabloid that labeled him a ‘wife beater’. A judge in London’s rules that The Sun’s 2018 article was ‘substantially true’ and that the father-of-two had attacked Heard a dozen times, causing her to fear for her life on three occasions.

After lengthy delays due to the Covid pandemic, the former flames finally lock horns in Fairfax County, Virginia where the Washington Post servers that published the disputed op-ed are based. The trial is expected to last six to seven weeks and celebrities tipped to give evidence include James Franco, Paul Bettany and Ellen Barkin.

Doncic’s brilliant hesitation to Shaq: “Then I’ll teach you swear words in my language…”