Josh Duggar of the hit reality TV show 19 Kids And Counting has been arrested in connection to a 2019 raid on his car dealership, five years after he was accused of sexually assaulting five young girls as a teen.

Duggar, 33, was arrested on federal charges in Arkansas Thursday and placed in federal hold with no bond.

A source told The Sun his detention is related to a Homeland Security raid on his now-closed car dealership in Springdale, Arkansas, back in November 2019.

No charges were brought against the reality star at the time.

This marks Duggar’s latest brush with the law after his father Jim Bob reported him to police in 2016 for allegedly molesting five young girls over multiple occasions back when he was 14 and 15.

His arrest Thursday comes just days after he and his wife Anna announced they were expecting their seventh child.

Taken in: Josh Duggar of the hit reality TV show 19 Kids And Counting was arrested on Thursday. The reality TV staple is in prison and has been ‘placed on a federal hold’ after being taken in by the Washington County Sheriff’s Office (WCSO), according to North Arkansas News

This comes just days after he and his wife Anna announced they were expecting their seventh child. Seen in  2015 with Anna

There is no bond listed for the Arkansas native and all that has been confirmed is that he is in the ‘hold for other department.’

The site suggested the arrest may have to do with a ‘lost a real estate lawsuit involving a quiet title.’

‘I can’t speak to any individual that may be under investigation. So I can confirm that we were at that address. And spoke to individuals at that location. But I can’t discuss any individuals by name,’ he added.

Duggar’s family are said to be ‘extremely concerned’ about his arrest but not surprised, having ‘known that this has been coming for weeks’.

‘The family has known that this has been coming for weeks, and Josh has been preparing himself,’ the source told The Sun of Jim Bob, his wife Michelle, and their 19 children.

‘They are praying together for Josh and Anna, who is standing by her husband as she always has.

‘Family members are extremely concerned by what is happening and they just want to find out the truth.’

The source added that the family will be speaking out about the matter ‘shortly’ and said they ‘hope this in many ways will bring them closer together and even closer to God.’ 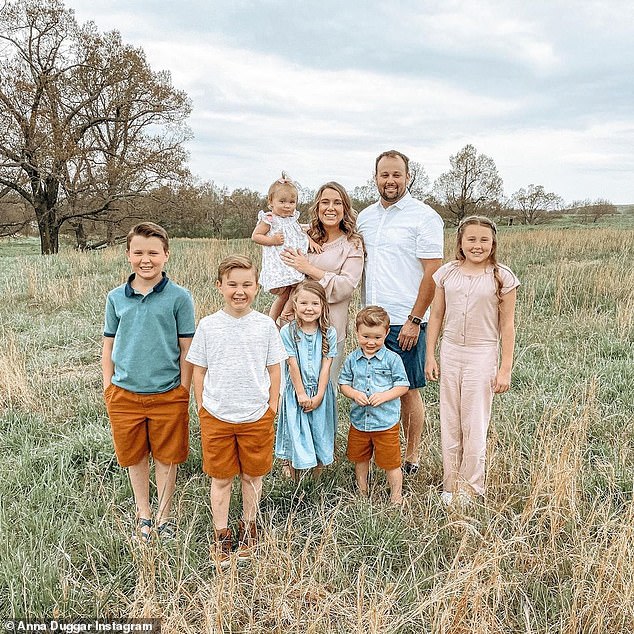 More to love: Josh Duggar of the hit reality TV show 19 Kids And Counting is expecting his seventh child with his wife of 13 years, Anna. It Anna who shared the news to Instagram on Saturday

Just three days ago he shared he was expecting his seventh child with his wife of 13 years, Anna.

Anna shared the news to Instagram on Saturday with a video of herself and her husband hugging in a field with all six of their kids running toward the camera.

The announcement doubled as a gender reveal as pink confetti came out of a clear umbrella the couple – who are both 33 – was holding over their heads.

‘It’s a GIRL!!!!!’ the caption for the clip began. ‘We are overjoyed to announce baby seven is on the way and we can’t wait to hold her in our arms this fall!’

The Arkansas resident added the hashtag for ‘little duggars’ and ‘baby seven.’

Anne wore a beige sweater over a white dress and concealed her baby bump as she hugged her spouse. Her hair was worn down and she was made up nicely for the shoot.

Josh wore a white polo style shirt and long blue shorts as he had a short beard.

All six kids were dressed up in casual clothes with beige, brown and blue hues.

There was also a portrait of the entire family, all smiling, taken in a field with mature trees in the background.

Following their announcement, Anna defended the couple’s decision to add to their brood on social media after a critic questioned how they could afford such a large family.

‘How do you afford all those kids? Does Josh even work?’ the person wrote on social media.

Anna fired back in response: ‘Yes, my husband is a diligent worker and provides well for our family.’

It is not clear what line of work Duggar is currently involved, with his car dealership now closed down and him resigning from his role at the Family Research Council in 2015 amid allegations of sexual assault.

Josh is the eldest of Jim Bob and Michelle Duggar’s 19 children.

Fall 2021: ‘It’s a GIRL!!!!!’ the caption for the clip began. ‘We are overjoyed to announce baby seven is on the way and we can’t wait to hold her in our arms this fall!’

In November 2019 the family announced the birth of their sixth child.

The image featured the little tot wrapped up in a green outfit and with a beige bow on her head. ‘It’s a beautiful day to be born,’ read a sign behind her, along with her birth date.

The caption said she was born at 9:12 in the morning listed her weight at 8lbs 2oz and length at 20.5 inches long.

‘Maryella Hope arrived one day ahead of Thanksgiving Day 2019 and a great reminder to be grateful for all God has done for us!’ they wrote.

‘We are so excited and thankful to God for His special blessing giving us this precious, happy & healthy baby girl!’

An explosive In Touch Weekly story in 2015 revealed that Josh’s father Jim Bob had reported to the Arkansas State Police that his son had molested five young girls on multiple occasions when he was 14 and 15.

He reportedly touched their breasts and genitals while they were asleep in their rooms.

According to a police report of the incident, four of the five underage girls were his sisters, and Jim Bob allegedly learned of it when Josh confessed to him in 2002. 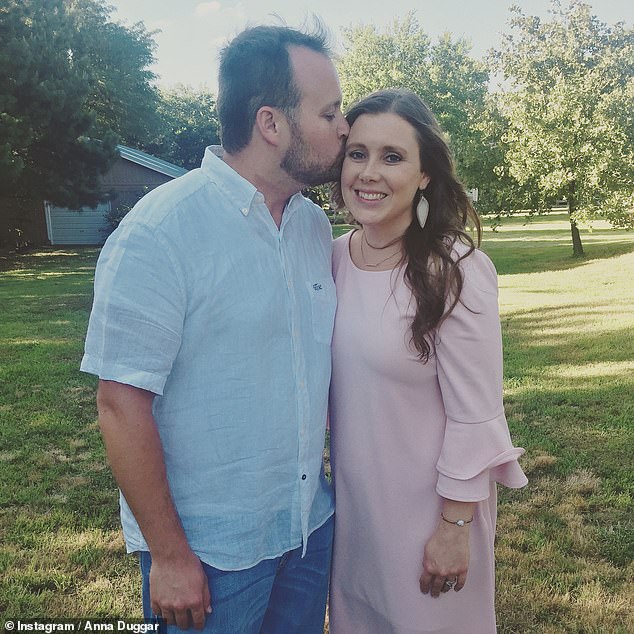 Growing family, like his mom and dad: The two are taking after his parents Jim Bob and Michelle Duggar who have 19 children

Josh was allegedly disciplined at home, but the sexual abuse continued into the following year with multiple additional incidents, some of which now happened when his sisters and a babysitter were awake.

Jim again waited to alert authorities, instead raising the matter with his church elders first.

Josh was sent to spent three months in 2003 at the Institute in Basic Life Principles Training Center in Little Rock, Arkansas, according to People.

The institute’s founder, Bill Gothard, was accused of sexually harassing or assaulting 34 women in 2014 and resigned shortly afterward.

After Josh returned, his father took him to see an Arkansas state trooper, at which point he allegedly confessed to the molestations.

Despite being a mandated reporter who is legally required to alert Arkansas Child Abuse Hotline to instances of sexual abuse, the trooper took no official action and only gave Josh a ‘stern talk.’

After the police report on Josh’s potential misconduct was reported, one of the victims, who may have still been a minor at the time, asked an Arkansas judge to destroy the original police report and any remaining public records related to it.

The victim’s identity has never been revealed, but it may have been one of Josh’s own sisters who successfully had the report and all related documents destroyed.

After the initial reporting, Josh resigned his position at the Family Research Council, which the Southern Poverty Law Center has designated as an anti-gay hate group.

In 2015, Josh was found to have created an account on the site Ashley Madison, which facilitates affairs, primarily for married men.

Amazon revenue tops £75 billion for the second quarter in a row.