Josh Taylor claimed his place in the legend of not only Scottish but also British and world boxing by gallantly prevailing in a battle of drama and attrition with American Mexican warrior Jose Ramirez.

Two knock-downs inflicted by vicious left-hand punches in the middle rounds proved decisive as the Tartan Tornado became the UK’s first undisputed world champion of the four-alpha-belt era and only the sixth boxer on the planet to achieve that feat in any weight division.

Those twin trips to the canvas by the also undefeated rival who held the two other belts established Taylor’s dominance at light-welterweight and he must decide now whether to make a mandatory defence of one of his titles against England’s Jack Catteral or move up to financially richer pickings in the talent-stacked welterweight division. 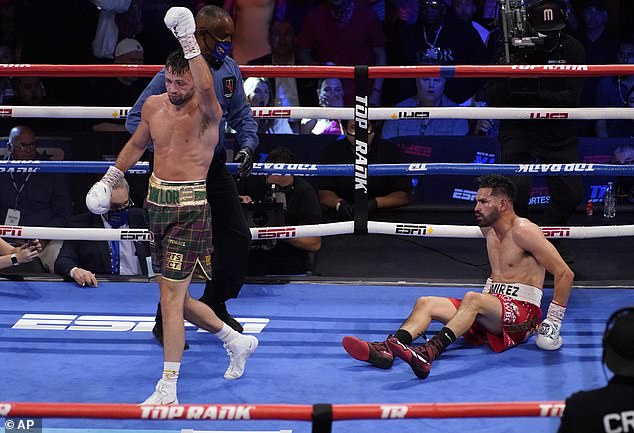 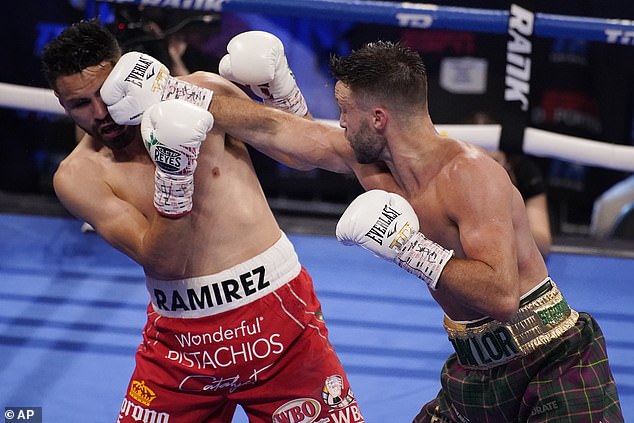 He says: ‘Jack on a big night for Scotland at Edinburgh Castle sounds terrific. So does fighting the great Terence Crawford. I’m ready for anyone.’

On this proof of his big heart in a small music theatre in what used to be the Hard Rock but is now a Virgin Hotel, yes he is.

Taylor had to survive a punishing start by the attack-conscious Ramirez, including a third round in which it looked like he might be the one dropped and also sustained a minor nick by his left eye, before asserting himself with left hook and then uppercut.

As Ramirez, a folk hero in California for championing immigrant causes, recovered and rallied Taylor had some big shots to take himself. 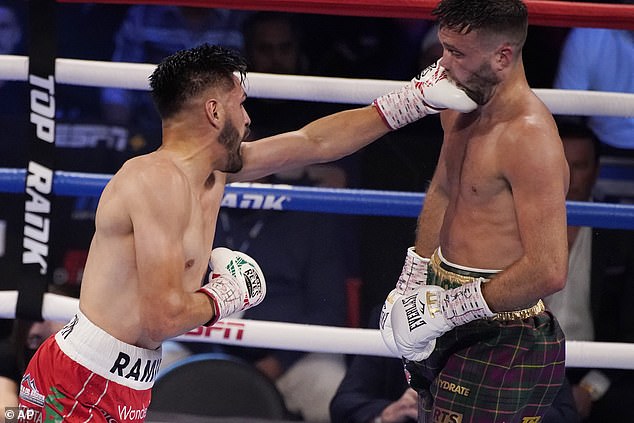 If Ken Buchanan, who he now stands alongside in Scottish folklore, was watching, he would have been proud of him. And Taylor doffed his cap to his idol, saying: ‘Ken, you were my inspiration and I’m coming home to see you.’ He will also be reunited with his family and fiancée who were refused permission to be here by US anti-Covid travel restrictions.

The two 10-8 rounds in his favour gave Taylor the unanimous decision by 114-112 on the cards of all three judges.

Taylor came to the ring in his tartan shorts and to a chorus of jeers from the Hispanic majority in the permitted attendance of 1,000 fans.

Ramirez made his entrance to ear-shattering proof that even that number can kick up a patriotic din.

Taylor looked crisp and sharp behind his southpaw jab in his attempt to stifle the expected Ramirez and probably did enough to edge the opening round.

Ramirez met the challenge with a series of storming attacks and stinging rights in the second and battle was well and truly joined. They roars of Mexico, Mexico rose as Taylor was trapped, rocked by combinations, hurt and left holding on in the third. As Taylor looked likely to level matters up, Ramirez poured it on again in the fourth and despite some good work was taking too many punches at this stage.

He rectified that in the fifth with his smartest boxing thus far but sustained a slight cut by his left. 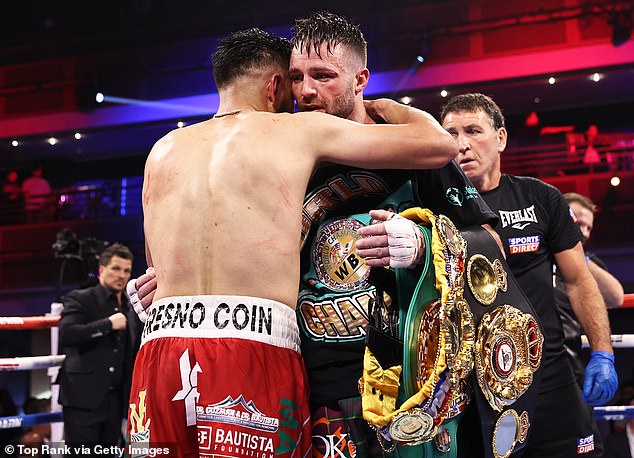 Taylor made his peace with Ramirez after the pre-fight brawl, calling Ramirez a great champion

As Taylor began to take control in the sixth of what was becoming a war he dropped Ramirez for an eight count with a stunning left hook.

The left worked its magic again in the seventh, this time by way of an uppercut which dropped Ramirez flat on his back. Somehow he got to his feet and was saved by the bell.

More surprisingly the Cali-Mexican might even have stolen the ninth as Edinburgh’s finest failed to finish him off.

The pace had to drop and as it did so slightly Taylor was rocked by a huge left in the tenth. Then he had to survive an onslaught in the 11th and hold on at times in the last. But he got there, made history, celebrated under the Scottish flag and made his peace with Ramirez after the pre-fight rumpus by telling him: ‘I meant no disrespect. I was just trying to get under your skin. You’re a great champion.’

So Jose was. So Josh is.

More than $100,000 is raised for family of six-year-old Aiden who was shot dead in his booster seat

TIM PAYTON: It's a FARCE the Arsenal Supporters' Trust have met Boris Johnson MORE than our owner!

Thieves use BLOWTORCH to break into home and steal vehicles including £33,000 Audi

Coca-Cola has insisted that 'everyone is entitled to their drink preferences' after Cristiano Ronaldo removed two...