Josh Warrington: Mauricio Lara rematch could be make or break for career 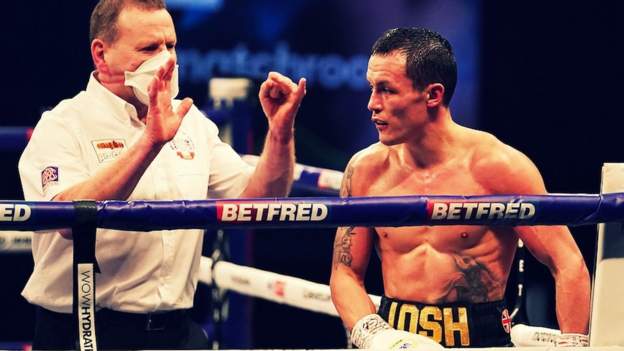 Josh Warrington says he would strongly consider retirement if he were to lose the rematch he desperately hopes to secure against Mauricio Lara.

The Leeds fighter says he would beat Lara “99 times out of 100” and that a second defeat could prompt retirement.

“There’s no point in hanging about if I can’t mix it with this guy,” he said.

The 30-year-old told reporters: “What’s the point? Maybe I could step up to super-featherweight for a pay day. I’m not prepared to do that as the sport is hard.

“For my own mental self I don’t think I would be able to settle if other people go in there and blast this guy out. I need to know I can get over this hurdle. Whether it be 12 rounds of being dominant or me knocking him out. I need to do it for myself. If I can’t then I’m calling it a day, simple as that.”

‘I peaked too soon’

Warrington gave up the IBF world featherweight title weeks before his first career defeat in 31 fights.

He now says he would fight Lara again “tomorrow” but that promoter Eddie Hearn and manager Steve Wood are eyeing a bout in August or September, with a crowd present.

By then, Warrington expects his shoulder damage to heal without surgery, though he may need the same routine elbow operation he has had several times before in order to clean up an ongoing niggle.

Since his defeat, he has shared a video call with unified world heavyweight champion Anthony Joshua and texts with the likes of former champion jockey AP McCoy, and Leeds United players past and present.

He says no one specific incident but “a load of little things” contributed to his upset loss. These include 15 months of inactivity, reaching peak fitness four weeks before fight night, the mental challenges of spending a week in a fight bubble, and a badly timed warm-up moments before his ring walk.

“When I walk to the arena normally, the heat and adrenaline hit you,” added Warrington. “I was stood on the stage and it was like I was too relaxed, like it was a sparring session with a novice.

“I was winking at Lara and stuff. I’ve never had that mindset. I look back now and think ‘why were you in that mindset?’ By the time the fight day came I’d gone through every emotion and thought the fight was probably a given.”

Warrington says he has had conversations with his father and trainer Sean O’Hagan, who faced some criticism for not stopping the fight before Lara’s ninth-round knockout.

O’Hagan has explained how he monitored his son’s breathing, eye contact and ability to take instruction before deciding he was fit to continue.

After the defeat Warrington made the journey from a London hospital to Leeds so he could be home for his twin daughters’ third birthday in the early hours of the morning.

“It was as though they knew there was something wrong,” he recalls. “I’m on the sofa all bumped, bruised and battered and they said ‘hello’ but didn’t come jumping on me like normal. It was like they knew and had a sense.

“We don’t want to be in this position again. I guess it does give you drive. I’ve gone from number one in world to number six. Even if I right this wrong I don’t think I’ll be back at the top straight away, but I don’t mind being an underdog.

“We are all delicate about that unbeaten record. It’s sport at the end of the day. UFC fighters get it and bounce back. Maybe boxing can take a lesson from that.”